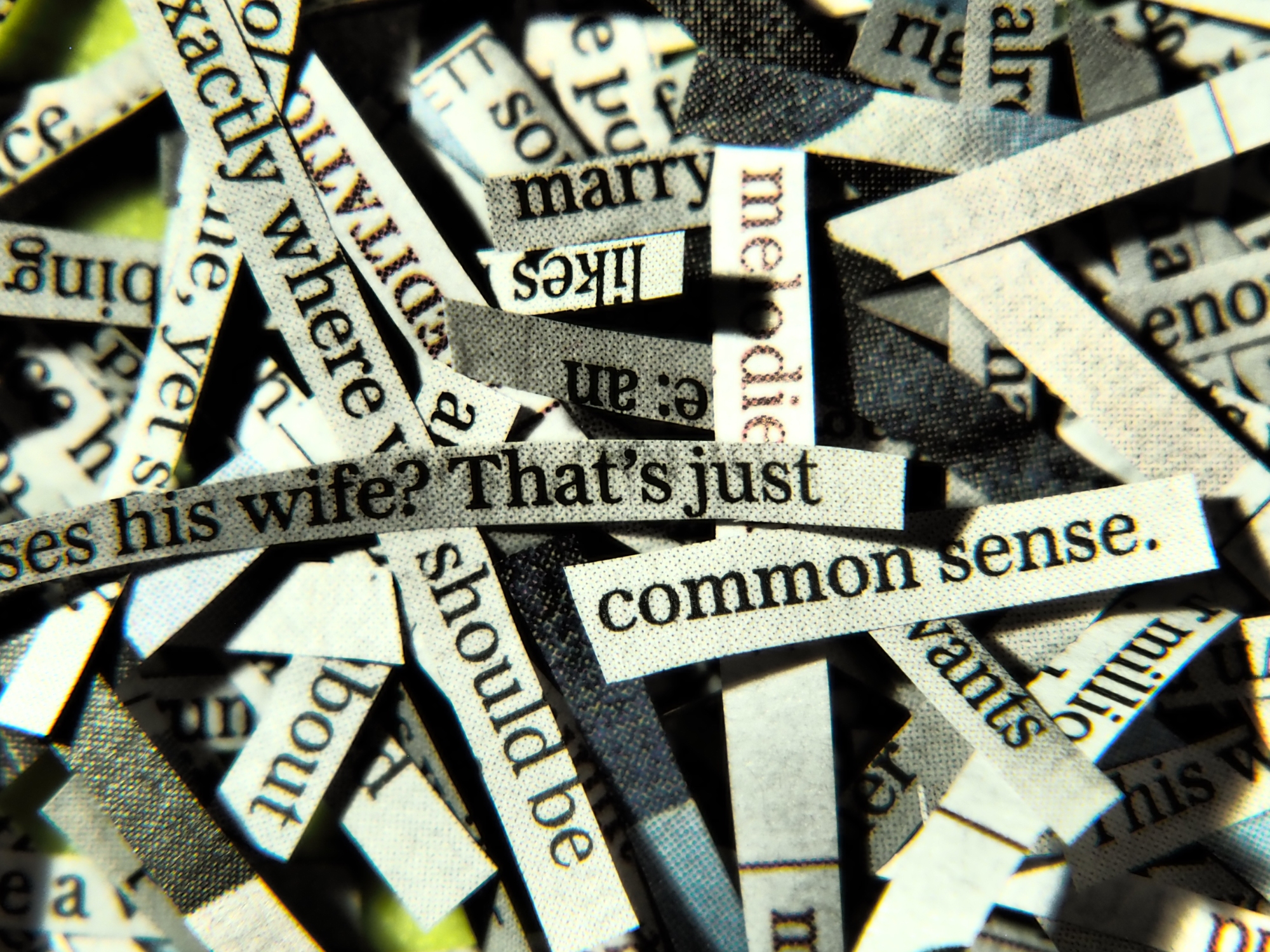 Ideas pop into mind occasionally leading to some sort of action. This week as the idle hours watching scans take shape waddled by, William S. Burrows popped into mind along with a method he used to create some of his writing. I dunno why this happened but the thought of cutting up some newspapers and making something out of them became an interesting idea. It lead me to read more about that era and that group of writers in particular. What have I gotten myself into?

The cut up technique is really an informal way of re-arranging pre-existing text into a new and novel composition. It’s kinda like DJ-ing with words. The method involves cutting up written words and arranging them into a new composition. There is a daily free newspaper the Metro that I can get and for good measure I purchased a couple more. I then started to look through them and read what they had to say. I have like five or six of them.

The problem then came regarding cutting them up. I like some of the images that are featured in them. Some are provocative and some of them are thought provoking. Some are able to convey a lot more than the written text can. Also, the short blurbs that are found in the margins because of their ambiguity seem to convey something as well. Two or three sentences out of context sometimes lead the mind to make connections that are completely unrelated to the original text. This kind of free association is exactly what is sought by exploring this form.

The question then becomes how do I put all of this together? I decided to make a short film and put that to some music. The problem then became how am I going to capture this? Through trial and error I came up with something that could allow me to work. By this time it was getting late. I could either continue along this path or sleep. A few more pieces are also needed in order for this to work properly. Tape and glue to help the arrangement stay in place as well as a direction.

What will this say? Judging from what I’ve read it’s going to be a slanted view of society based in the editorial direction that media takes. I also don’t want to spend a lot of money. I’m hoping that somehow I’ll be able to put all of this together using the basic software on my laptop. I’ve never done anything like this before.

I really got into the cutting process. Time seemed to have whittled away as I became absorbed in the task. There is an outside world however and an appointment to get to. The floor of my room is covered in clippings and discarded pages. It was time to leave it all behind and go to my appointment. Sitting here in this café there is time to reflect a bit at the task that lays ahead. What is required is a loose intuitive approach to capturing the images. Some experimentation occurred yesterday it’ll be interesting to see how this comes together later on. If worse comes to worse it’ll just be still images that grace this page.

Sometime later… A lot later in fact. Just finished having a breakfast sandwich at “The” coffee shop. Old English ladies give me the eye as they walk by in their Sunday clothes. They look every bit the stereotype one expects in a small town. Over the past day or so since I typed here last I’ve been engaged in the activity of cutting and rearranging a piece of text that had some kind of resonance with me. It wasn’t so much the words themselves but what they conveyed. The idea behind it.

Old wisdom teaches us that “actions speak louder than words.” What that saying says is that the truer or more accurate picture of who someone is can be gathered from the choices that one makes. It gives a better insight into the individual’s character. What greater a decision than who someone chooses to spend their time with. Couples who bond (semi-?!) permanently together make a choice based on their individual desires that the other fulfills.

Someone once told me in the course of a discussion that the partnership with your mate is the most “interesting intellectual journey of your life.” This line alone prevented me from being shallow and to look beyond the surface. It’s not like the surface doesn’t matter but the filling is equally important. It’s what becomes the glue but I digress.

After having my breakfast yesterday I decided to get some more reading material. There wasn’t enough feeling with what I had already. The pile of papers that I bought was kind of heavy. They were all weekend editions so they had a bunch of of extra sections in there. There are usually more essays about different subjects. There is certainly a lot more to read. It’ll be sad when the newspapers finally kick the bucket. There is something about the tactile feel of newsprint. The different sizes of the different papers allows for the presentation of some great images. These more than anything else this weekend have had an effect on me. The wheels are turning and somehow I’ll have to turn this material that I have into something.

It’s easy to be distracted but the goal was to perform a cut-up project. Knowing that I found a couple of articles I decided to use the one that would be the easiest one to cut up “trophy wives.”

Besides the actual physical task of cutting up the material I also decided to make a time lapse movie out of it in order to capture the creative process in action. For this I set up an elaborate mock studio. I’ve been experimenting with different techniques and this has been the other thing that has been occupying my mind. Well that’s not necessarily true. There was software upgrades and installs along the way as well as a steep learning curve related to its operation. No worries, sorted. There were also interruptions to go and chat, shop, eat, and an appointment at a bank. Time flowed quickly as it should when one is occupied.

What the article says and what the découpé became illustrates something that was theorized about the technique. That the inherent tone and theme is brought closer to the surface. There was no intelectualization of the material just a start with the first interesting clipping and then it went from there. Afterwards I glued the arrangement onto a page and that is it. The finished product.

One thought on “Prima Aprilis Découpé”