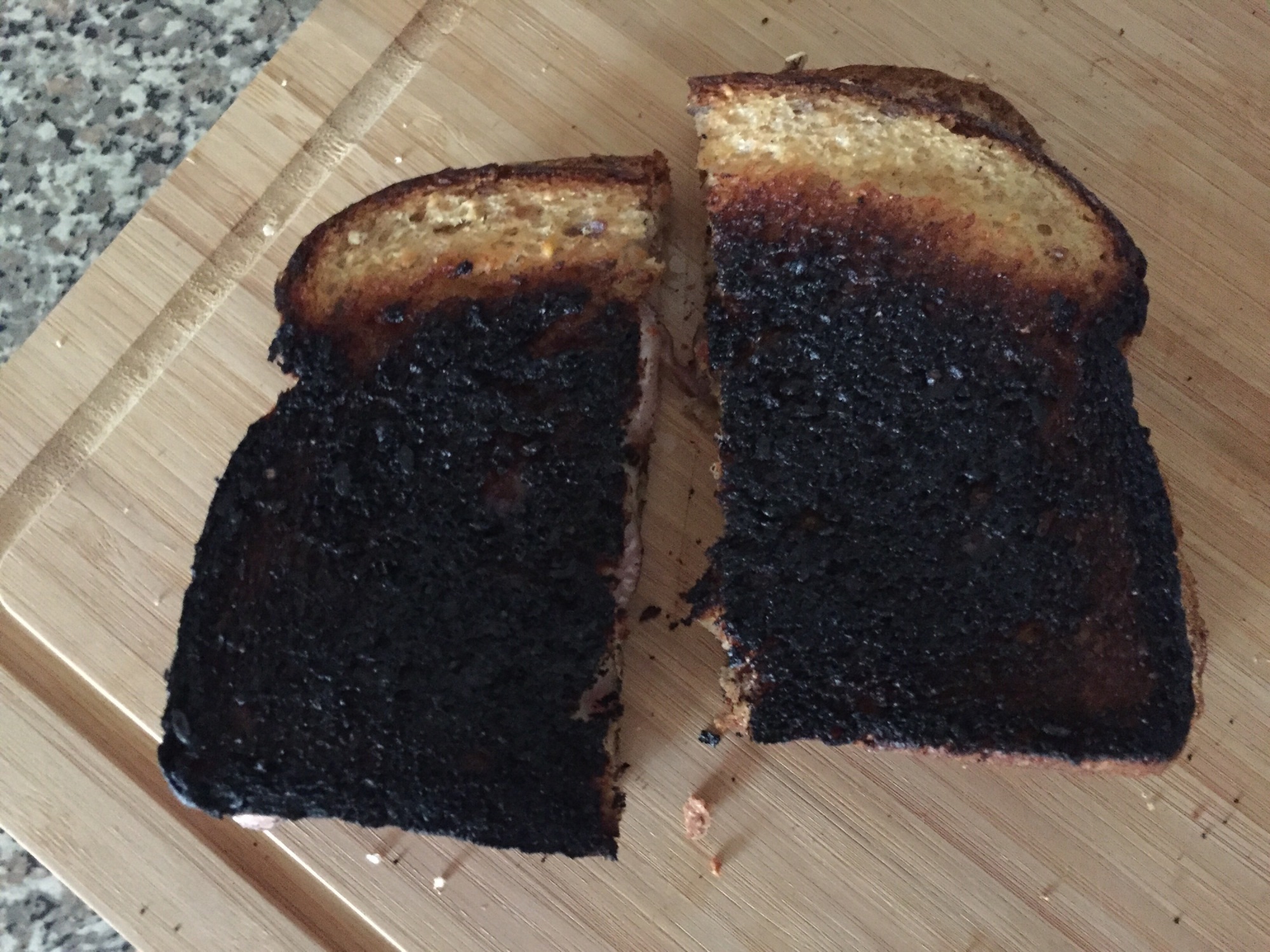 The secret to life they say is finding meaning in the mundane in the everyday. What is the meaning of “burnt toast”? I stopped everything that I’m doing to ponder this question.

I stopped doing the dishes but let the fans run and air out the place. I have just come back from moving the laundry to the dryer and admiring the cloudy weather outside. I was about to clean up the dishes when I thought about this concept.

It’s not like I wasn’t watching. I was pacing around with the temperature setting at six initially and then down to three. I found a kid that fit over the frying pan. I was going for the low slow cook. I kind of got impatient and turned it up again when I noticed that the butter on the top still wasn’t quite melted. It was then that I should have checked the color of the bread but I kept cooking. The damage was already done by the time I lifted the cover and released the smoke that had managed to build up in that short while.

I kind of swore under my breath while simultaneously turning on the fan and flipping the toast around to reveal the burn. I felt sad at that moment. Between the slices of this bread were the last four pieces of cheese I had in the fridge and thinly cut sausage that my dad made last week. This was my breakfast well it still is my breakfast. I continued to cook the other side as I examined the damage caused by the heat. I could probably scrape some of this off. First I should probably cut it in half. I burnt the other side too! Damn it! The toast is not burnt deep into the thickness of the bread. It’s a crisp shell that envelops the finely melted cheese and sausage slices. The pan I’m using does have a tendency to burn things. I should have been more patient with it still it was tasty.

So I thought about this in context of my life how I made the best out of a bad situation. There is the observation that I should be a bit more patient with what I am doing. Maybe I’m using too much heat? I should pay more attention to what I’m doing. Maybe there is no meaning and this was just one of those things that happen. Or, maybe I should stop overthinking things so much.

It’s funny that I stopped everything that I was doing to just to allow the stream of consciousness to continue. I was tripped up a little by the spelling of “shell” #damnAutocorrect kept shanti get it to “she’ll” and even now it did it again. The things that perk attention and focus on minutiae while swimming in the ether of the grander scheme.