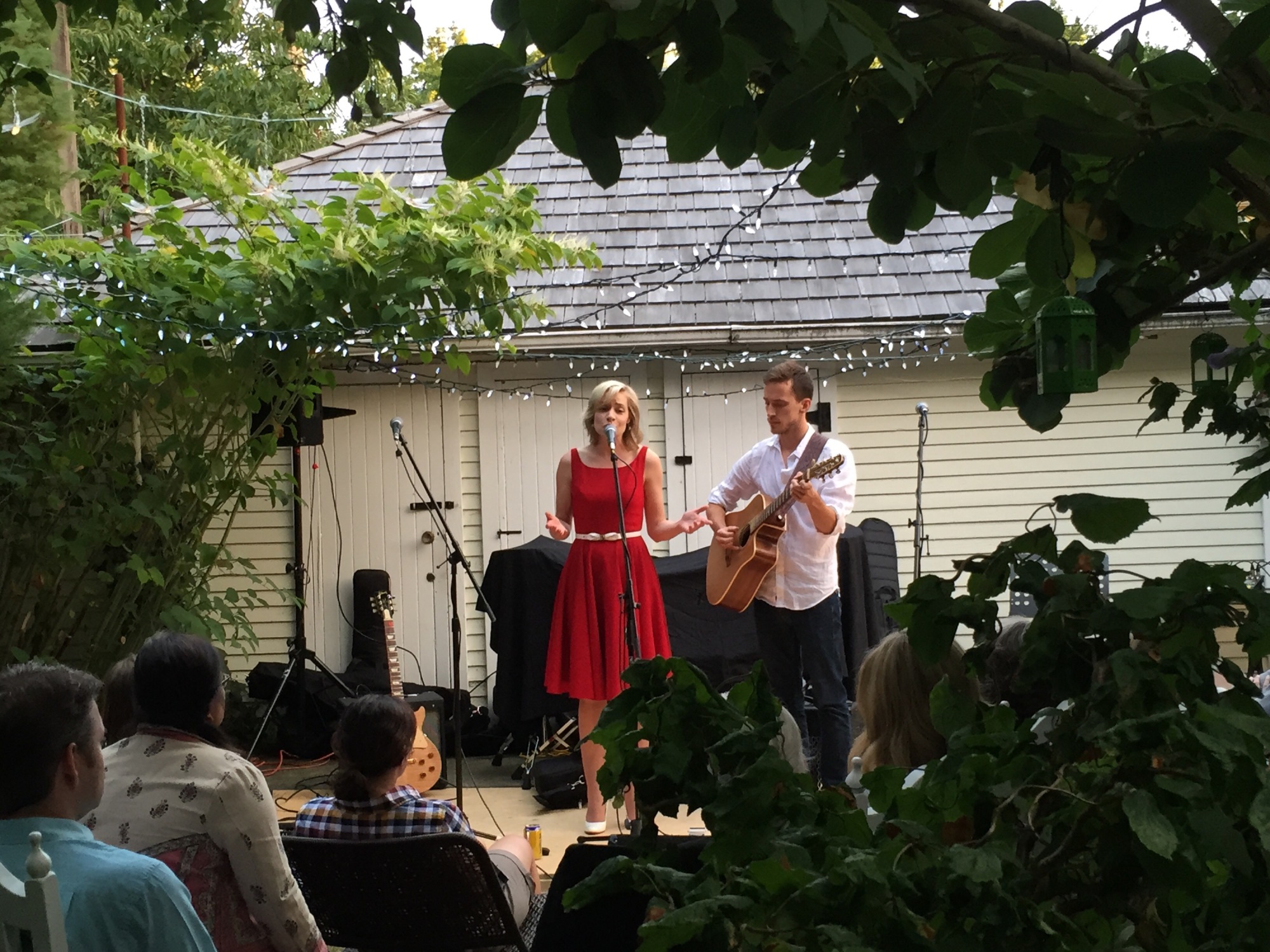 The time to be there was fast approaching yet I had to see the conclusion of the series I started watching yesterday. It wasn’t so much that it was gripping or that it was particularly superb but I wanted to see how these characters that developed over the course of this series were to pan out. Reality has been abandoned and this show has become a metaphoric journey that says something about society and individuals. How misguided both of them are in their pursuits and how disjointed it has become from the ordinary reality of everyday folk. 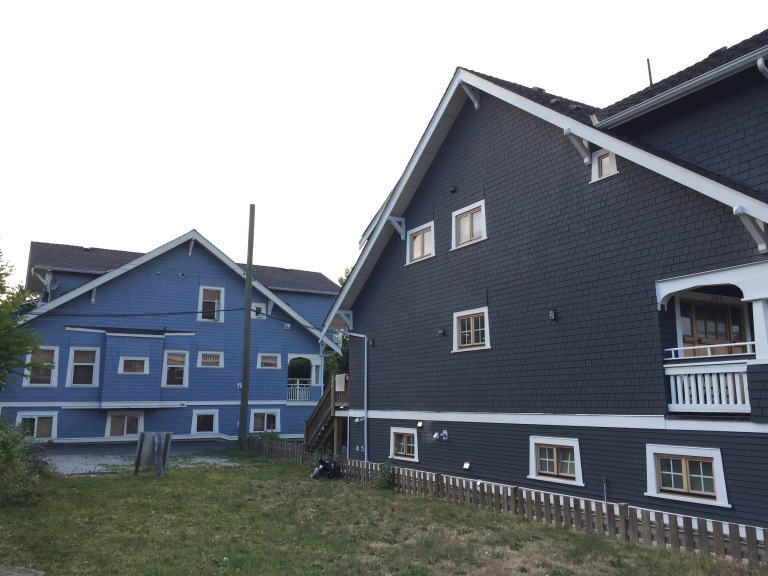 As I made my way to the party I thought about the influence such a heavy theme would have on me. It was a lazy day up to that point. Somehow some way the hours were frittered away with plans of my immediate environmental improvement set aside for a “show”. Now I’m kinda running behind but at the same time remembering that it’s good to come somewhat late. One can’t be there first for the party at least not this one.

I spent quite a bit of time in this part of Vancouver when I was going to university. While the streets are familiar some of the changes are not. This however is an older neighborhood and some of the settled buildings have shifted ever so slightly and that touch can’t be recreated in the new houses designed to blend into the “character” of the ‘hood.

Why is it that being in a place makes my mind search out the connection that I’ve had with it? A lot of that has been happening lately. Memories of times gone bye and the situations that were born in those times. In some ways I was on the same search then as I am now. It’s as if nothing has changed. I am still afloat looking to dock my ship in a welcoming port and shelter from the turbulence of this world of ours. It’s a little piece of paradise that has thus far eluded me. I’m starting to reevaluate my dream and wonder if it’s too all encompassing. As was suggested maybe I am trying for too many things and thus sabotaging my chances of success. The years have taken away my innocence and new factors have come into play. The dream that once was can no longer be and what remains of my other goals must be reevaluated into something else. A new stream. 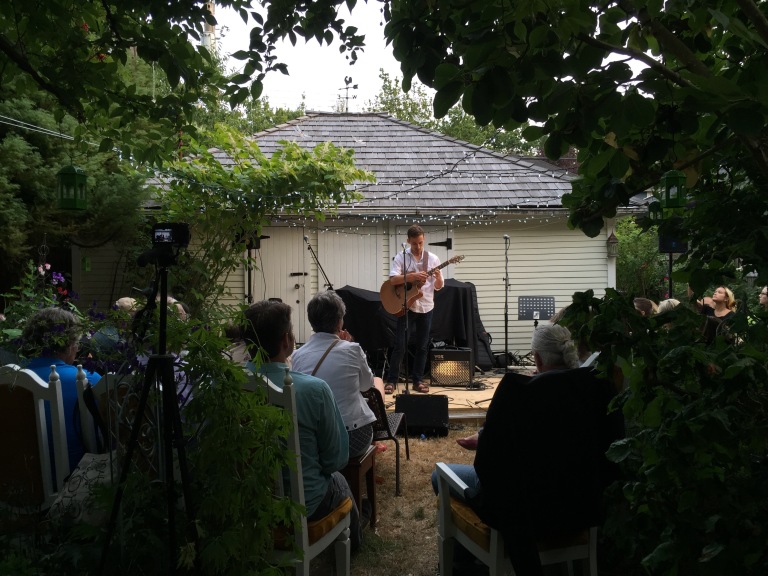 As I listened to the strumming of the first performer a calm came over me. The small audience seated under the strung out lights sat in rapt attention listening to each note strung from the string and each tap on the body of the guitar. The compositions exuded a maturity of thought and the quietness that comes from deliberation upon the state in which we live. For a young musician the music fit right in to the setting of this backyard in this neighborhood.

His vocalist joined him to round off his set. She sang in the style of a bygone era when swinging was in and glamour was found in everyone’s style. Her pale light skin contrasted sharply with her red dress and again she reminded me of another time and another place. Their lyrics spoke to my present predicament and my predilections. It made it all sound so poetic and easy so I listened intently to their performance in search of answers or at least a clue. 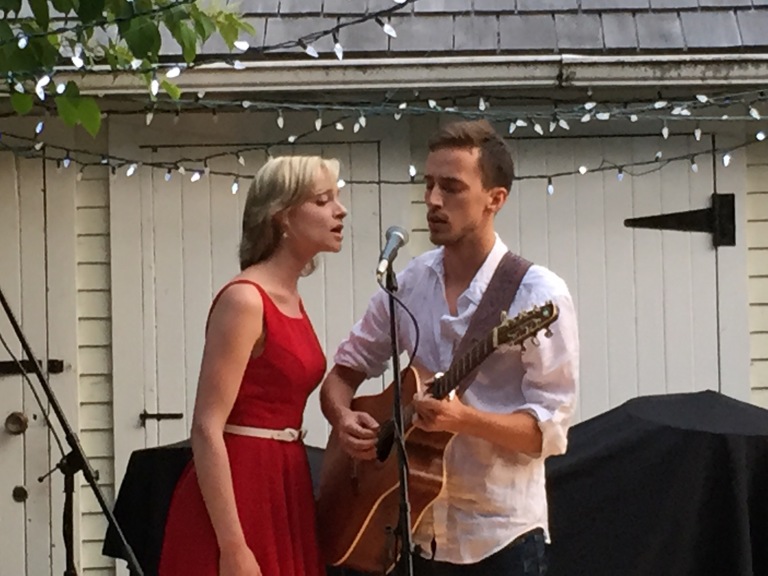 My current supervisor at work invited me to come and attend this gathering at his house. It would be something different I thought to myself as I accepted the invite all those weeks ago. I got to see a few colleagues one of whom now works at my old alma matter doing work that is interesting to me. We talked for a while about that and I offered to help her out. I did gain some clues as to how things are shaping up and potential directions of where I could go.

The featured band came on as dusk began and the overhead lights became more prominent in their glow. These tunes were amplified and were a mixture of originals and covers and displayed a seasoned performance adaptive to the audience and stage in which the band finds itself in. As with the band before the lyrics spoke and reverberated within.

The day’s exposure to artistic expression was now filtered and digested in light of the present day. The show spoke of the chains of the past and of their influence on the present and music spoke to optimism and hope that it will be alright. At least that what it seems to me now as I sit here the next day basking in the sun watching movement happen along many confluent paths.