They come in waves the thoughts that consume my daily focus. Like those backpackers that I admired on the train back into the city. The evaluation is constant but I need to think clearly about it. My impending birthday has something to do with it. The number of candles indicates that I should get serious about life and where I would like it to go. These long journeys have that sort of effect. I don’t want to dwell but I need to let this process happen.

The haze is doing a number on the scenery. The blue sky replaced by the murky smoke that has descended from the northern fires that are raveging the forests. I watched some of the news briefs on the laptop to get a sense of what is going on out there. So far the population has been spared as not many people live in the areas where the fires are raging. There is no real rain in the forecast. This bleakness will continue for a while yet.

I’ve been trying to get a place to call my own. The one place I looked at on Sunday is promising but I still need to know if it really will work out. I called another lead that was suggested to me but no response as of yet. The rental market here is quite intense. There is little stock to speak of and the market seems to be dry for those wanting a place to live. It just seems to be a struggle here with no abatement in sight with respect to prices. A few days ago I read about the real estate market here and how it holds a special place along with London and New York with respect to the high cost. Places here are an investment vehicle for the well off from overseas.

In the morning I set up my equipment to capture the little hummingbirds as they drank from the feeder. They sporadically came and went one chasing the other away from their territory. There is a bit of competition between them as to who can be there drinking the much needed water on these hot summer days. There is something to the simple life they lead. They seem to be playful birds sometimes hiding from my lens and my presence in general. The mosquitos got me as I sat there waiting for that perfect shot drinking my coffee and reading about what is going on in this world. Here on the west coast I’m far away from all of that.

One of my parent’s friends has set up a few bee hives on the property. It was only today that I clued into it. I got as close as I felt comfortable doing. It feels like this is out of place but it really isn’t. I watched a little from afar as he tended to his bees oblivious to the potential of getting stung. This is his hobby that occupies his time in his old age.

When I got back to Vancouver I had a few things to take care of. I went to the bank to activate a card that I got in the mail. It’s the first of many that I am expecting to get. Since I lived in London for so long I never used it so I had to go to the bank and get the PIN number set up. The line up was long and I had a good chat with the teller that was helping me. I told her about my travels and what I am doing back. Her opinion of my dilemma is a simple one. Go after the money fool. 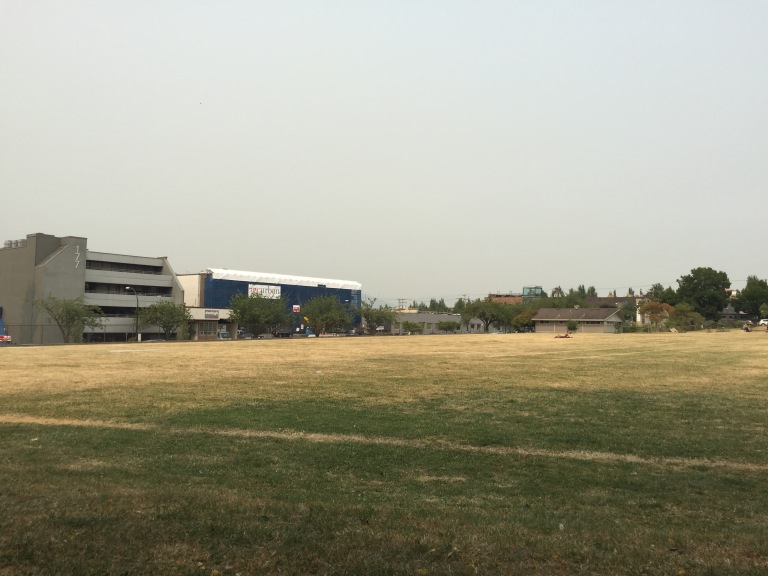 I sat in the park for a while after that. I needed to call someone about a flat at a particular time. I watched as the softball players slowly set up and started to play catch. I watched the throwing and catching techniques and realized how difficult it is for some to have a smooth coordinated motion. The phone call ended with me leaving a message.

All of us sharing the flat were in one place all together. We did some rearranging and sat in our own spaces consumed with what we need to do. Some days are harder than others and I need more adventures than what I’ve gotten so far.