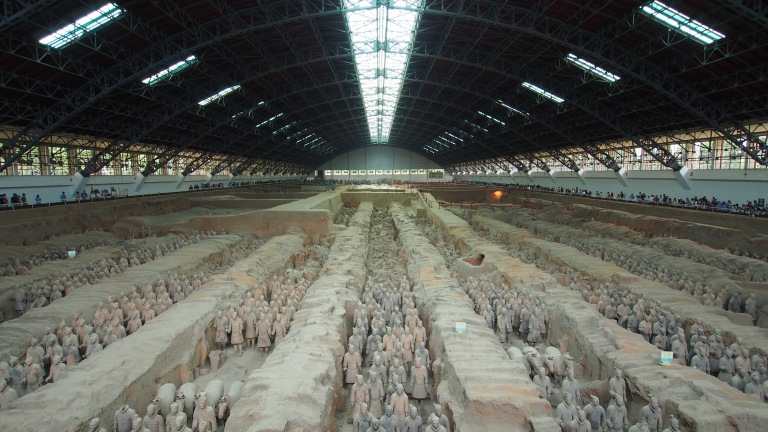 Ancient faces stared out from beyond time. These clay men’s individual faces were captured and preserved from the ravages of time until their discovery in 1974. A large number of them still lie in place waiting to be revealed. The tomb of Emperor Qin Shi Huang whom they are protecting still lies undisturbed. The science of preservation is still not good enough to reveal its contents.

We met at nine a.m. to depart for this excursion. The site lies about an hours drive from the city. The first stop however was the Temple of the Eight Immortals. This ancient temple gives a glimpse into the past offering an insight into the thinking of the ancient Chinese people. The temple is not as old as the Terracotta Warriors but it descends from those times. The visit to this temple allowed us to learn a little bit about Taoism and the origins of the symbolism that still has relevance and power today like the yin and yang. 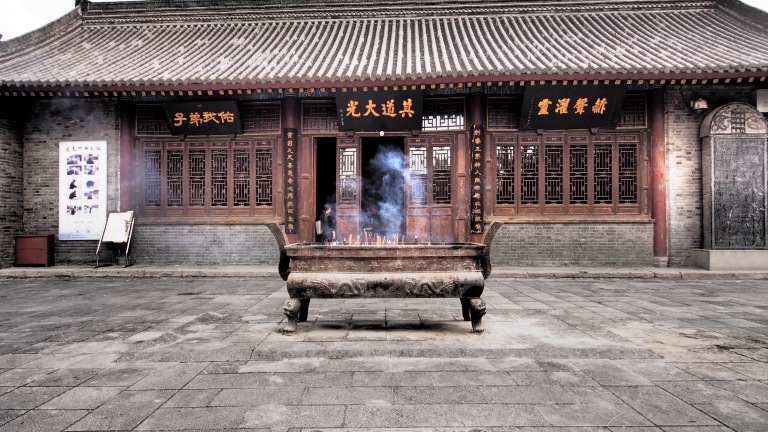 We entered some of the shrines constructed on the site and looked at the revered statues contained within. Taoism is a distinctly Chinese religion that over time blended with Buddhism while retaining its unique character. The immortals reveared here were once men who through their actions attained renown and are believed to have become entangled in a cycle of reincarnation returning periodically to help man attain similar enlightenment.

Worshipers a that come here believe that these eight immortals have a particular strength to answer the paryers of their believers. We watched the ceremonial burning of insense and the bowing in reverence. The ancient Taoist practitioners were usually found outside the city leading a hermetic life exploring alchemical knowledge and sometimes sharing their wisdom. In a way they were doctors and shamen of their age. Some in the group sought the wisdom of the soothsayer in one of the temples to help guide them to their desired answers.

We got back onto the bus for the journey to the Terracotta Warrior site. We got a bit of a background about the construction and history surrounding it as well as the dynasties that have shaped China to its present time. There are basically eight distinct periods that are of prime importance and two capitals that are at the center of them. The first four involve Xi’an and the last four center around Beijing. Xi’an is the birthplace of China as we know it. The emperor who’s tomb we are visiting managed to unite the various fifedoms into a cohesive kingdom. The location of this city made it ideal to serve as the capital of this newly united land. Throughout its history China has been plagued by maurauding nomads that inspired it to build the Great Wall of China. Furthermore there seems to be a three hundred year cycle where China grows in prominence and stature in the world. 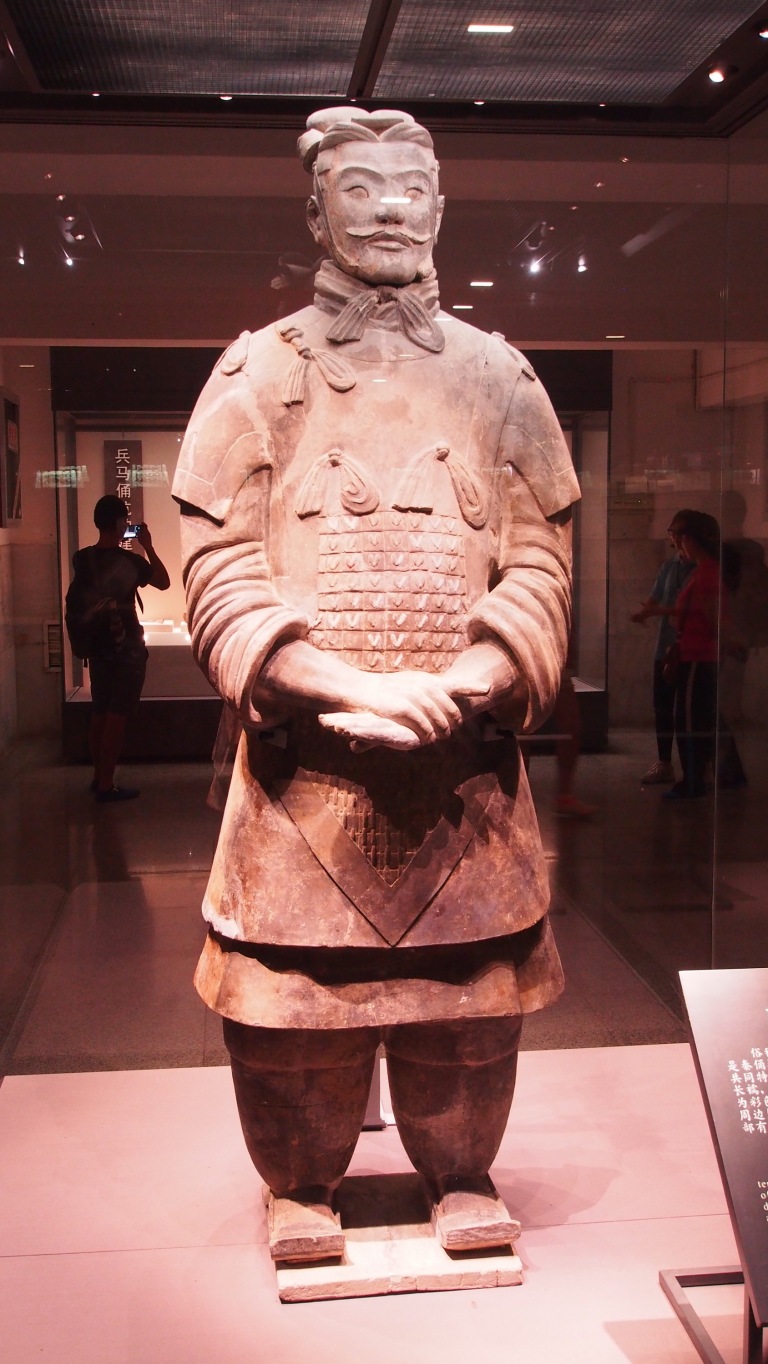 The burial site that houses the Terracotta warriors is huge. It is estimated to be around fifty square kilometers making it one of the biggest such sites in the world. The sophistication of this complex is not yet fully understood as it will take time to carefully explore everything it contains. One artefact that is interesting is a chromed sword found in one of the pits. This object employed technology that wasn’t rediscovered until the 1930’s and 50’s. Chrome plating prevents the oxidation of iron by coating the iron with a thin layer of chrome. This process needs to use an electrical current to bond the chrome to the iron. It is a sophisticated technique. There are no records of how this was done.

There are three pits that are covered by huge roofs built to protect them. There are active excavations at these sites even as tourists walk around the perimeter admiring the sights before them. It is really fascinating to see these artefacts. One of the buildings had examples of the various ranks of people. The general was the largest of these statues. I wonder how big the emperor’s statue will turn out to be.

Moving through the complex was hampered by all the people visiting the site. There were various groups of tourists moving through the site. I even met a couple from Maple Ridge! They were very happy to be touring through China. The day was dragging on and it was getting close to leaving time. Our group fractured into smaller groups to make it easier to navigate the crowd and the site at our own pace.

The site of the tomb was chosen by the emperor because of the richness contained in the mountains. This area has deposits of gold and jade that continue to be mined to this day. There are also hot springs and these are accessible and enjoyed as well. Back then they were the exclusive domain of the emperor. Some of the dances and music that we saw the day before were composed there.

The jade shop offered government approved jade. It was and is the safest and cheapest place to buy jade. There was a multitude of different levels of quality of jade on offer. Jade is highly prized in Chinese society. It is a way of signifying love for someone as well as it holding spiritual significance in Chinese society.

We left the grounds and made it through streets of vendors selling a variety of trinkets and fruit. As this place is a tourist mecca there are many people selling things to passers by. We made the decision to visit the pagoda outside the city walls but none of us knew what this would entail.

The bus ride was slow. The traffic moved at a snails pace and I attempted to get a few minutes of kip but was unsuccessful. Conversations started and we shared stories of our scariest and interesting moments from our lives. It helped to pass the time as we slowly navigated our way to the pagoda. Once we got to the spot we no longer had use of the bus. The estimated time that we were going to be there also increased. None of us felt prepared for this.

At this point it was getting close to seven in the evening. We splintered again into manageable groups depending on our immediate needs. Some chose to eat right away while others chose to continue exploring a little more befor stopping and eating. The area around the pagoda is a new development. The government invested hundreds of millions of dollars to improve the area transforming it into a public space where there are many restaurants and shops. This area attracts many locals that engage in various activities like flying kites and dancing in groups. It was a really lively place to be. At nine there is a water show in the park. 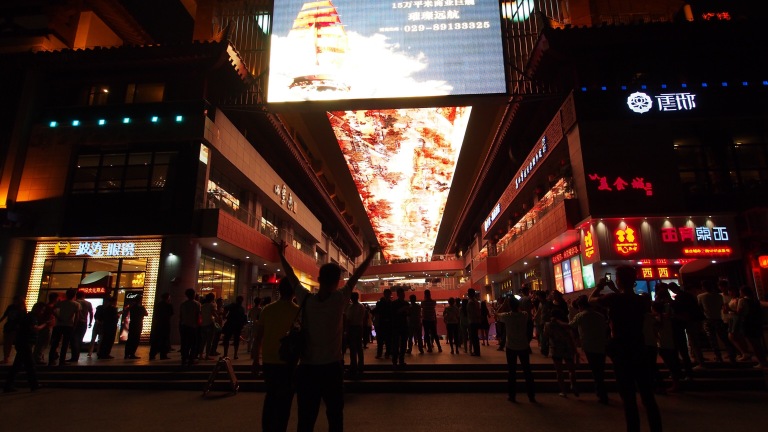 We had some time before the water show started and our group fractured again as we had competing interests and tastes in the type of meal we wanted to have. We ended up at a Japanese ramen fast food joint. It took some time to figure out what we wanted as we passed around the one and only menu at our table. The food was really good at a decent price. We had a scheduled meeting time and place to meet up with the other group. They were nowhere to be found but no matter we had a good vantage point to view the impending show.

Personally I have seen many many water shows and this one was pretty good. We had fun watching it and messing around in the crowd that gathered to watch the show. In particular the older shorter ladies that were aggressive and cunning in their method to get to the front so that they could see what was going on. We engaged with some of the locals photobombing their selfies. We could also feel the beginning of rainfall.

The weather wasn’t the greatest today. The wind picked up at times and the day was overcast with a murky amorphous cloud. Rainfall was bound to happen at some point in the day. I have also began to feel run down throughout the day as if my body was directing energy toward a battle inside with a bug of some sort. I haven’t felt like this yet but I felt like taking it easy for a bit and getting some sleep. As soon as we got back to the hotel I went to bed. It was a long day out there exploring the city. It was a really good day despite everything.