Early in the mornin’ risin’ to the street, gotta make my way to the spot that serves that nectar that I need. 🎶🎶

Not quite that poetic when my eyes first see the light. The rain was coming down and the air, it felt quite damp. I felt the need to just get out as my roommate’s still asleep and it wouldn’t be that nice to make a whole lotta noise. I sought out breakfast and an ATM for the cash to buy it with. Not many things are open so early in the morn except for the street vendors firing up their stoves. No ATMs would accept my card and some had people sleeping rough a little bit of panic started to set in. One would think that in a country such as this this problem wouldn’t exist. Persistence eventually did pay off the ATM locked the door when I inserted my card within.

Maybe it was the pills I took that have started to work their charm. To fight off some infection that has started to break my charm. So many days without feeling sapped because of some damn bug. I’m determined not to let this get me down. With my rain jacket on I carried on and found the golden arches that would feed me this dawn. Then off for some coffee from the mermaids bounty. There is something to be said about that green circle that symbol as it keeps drawing me back in. Bounty from the stars, monetary charms brought peaceful bliss as I’m the only one around. 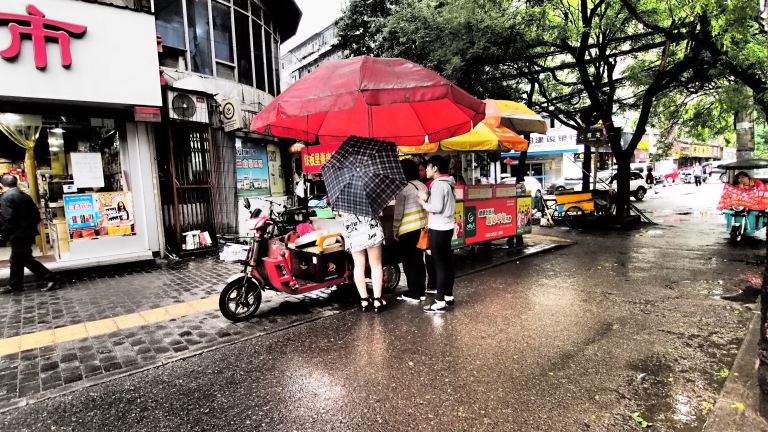 The route I had taken was a more real way. I saw real people going about their day. It must be the same every morning irregardless of rain. Kids dropped at school and then the parents go away. They’re rushing off slowly they seem to have time except those that are running, they must sleep in from time to time. Some look quite fashionable while some do not. Some of their uniforms just look way too big like they’re waiting to grow into them even if they’re waayyy past their teens. Nothing like a cop who looks like a stick talking to the fat tuk-tuk driver eating some meat.
The way back was calmer the rain finally stopped and I found reflections on my way to the hotel. Life seemed to be surging back to the streets, the horns loudly blared. On a one way street a stoppage is bad since there’s no way around, no where to pass. There is no frustration just a signal to move. I haven’t seen anyone fighting or yelling like that. Voices get loud but not in the way that anger boils over and leads to a fray.

I was up way to early I do must say. My roommate was still sleeping as I tiptoed away. This was the second time I sneaked out but this time I mentally gave him a time when I would be back. Downstairs for a minute to write for a bit compose in peace and quiet until some people came in. We had a short timeline as check out approached and we spoke of our need to have all our clothes composed in our luggage to go. These backpacks would sit all afternoon in a corner together until it was time for us to move on. Today’s journey is a long sixteen hour ride. It’s hard to imagine how to pass all that time but it is also our third such ride. 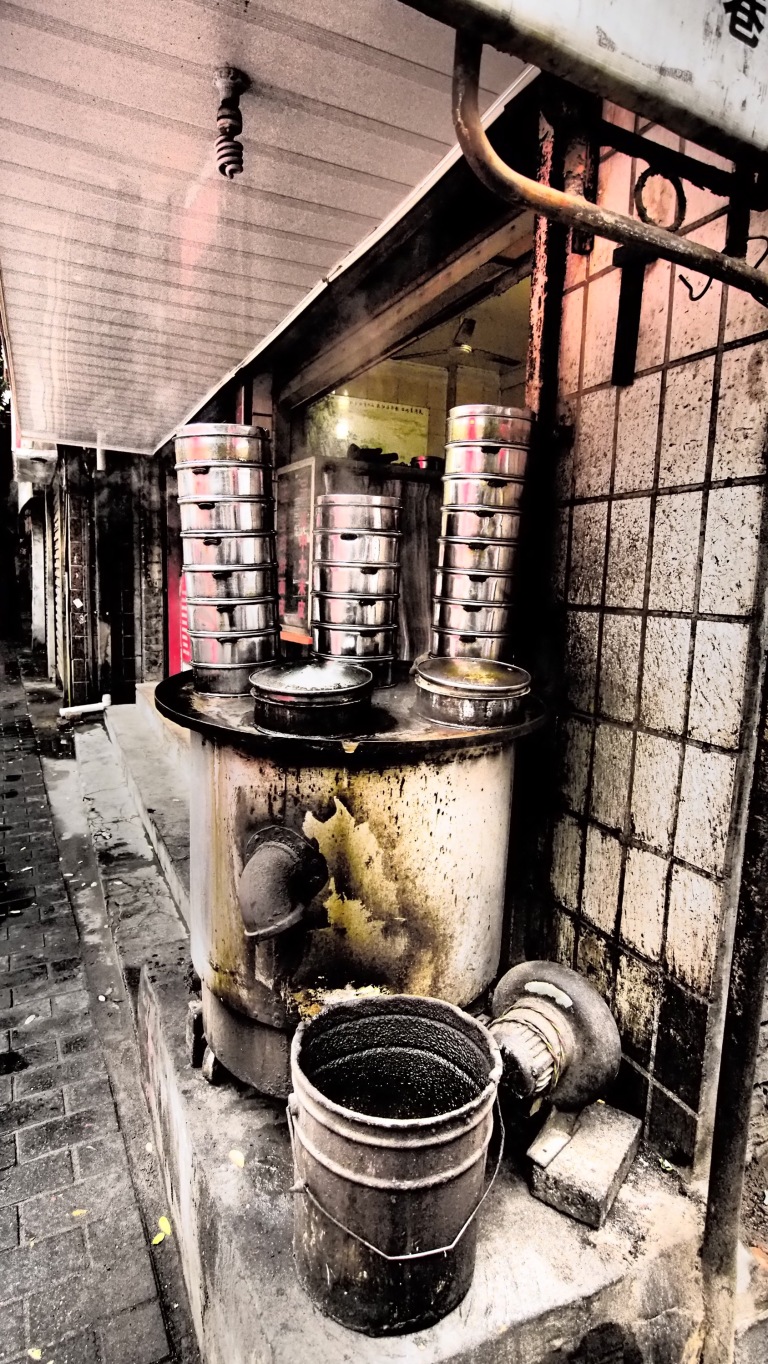 With my pack ready I felt like I should just sit there for a while and wait for the drugs to have an effect and also for all those pictures to make it to site. Some took a while, while others did not. The VPN kept dropping but sometimes it was the slowness of the veefee but really I can not explain, what it really was. These things just take time sometimes. Once the upload was finished I was all alone everybody left to go and explore on their own. I made a decision to walk for a while. I picked my destination and studied the roads. I had just a fixed amount of time to make it there and back.

The Xi’an Museum was many blocks away I estimated rightly how long it would take. I almost walked past it as the signs were Chinese but it was the gate that cought my attention and welcomed me in. A restaurant was conveniently there too the pics of the dishes looked tasty as well and to top it all off they even had coffee that enticed me in. I entered the premises and found me a seat and through the magic of pointing communicated my needs. She double checked my order and then to the loo upstairs down the corridor it was the last door. I quite liked this place with its dated decor and the stale cigarette smoke replenished with more. The meal and the coffee was tasty and soon I was ready to go and explore what this museum had in store. 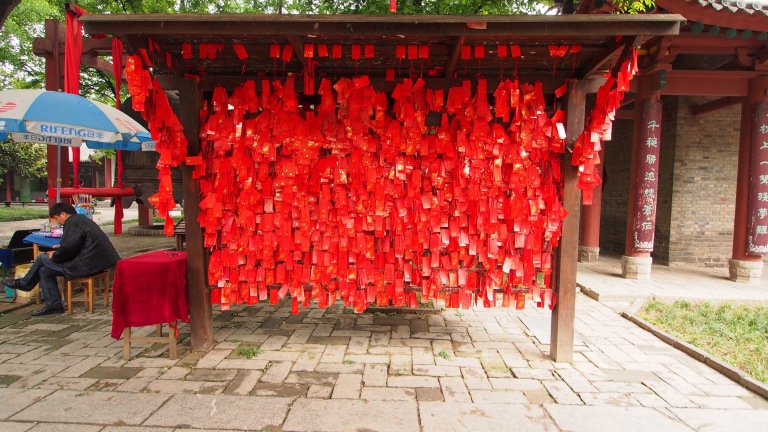 The grounds of the pavilion were once a holy site where Buddhists congregated and built a pagoda that still stands today. This structure is standing since seven oh two and it looks like they did some work to help it make it through. It’s an example of how many such structures stood all around the kingdom in the style it has. This place has been restored to house the history of this old capital city. This city that linked to Europe along the Silk Road.

Inside the new pavilion I saw the progression of artistic expression. Through the way that Buddhas were represented in carvings and statues of various sizes. How different materials were blended together as representations. How porcelain was colored and molded into intricate pieces representing all different aspects from abstract to the real. How it represented the local people through time to a point when Xi’an lost its prominence. There was a section of jade artefacts too and it talked of how it plays such a prominent role in their lives, even today.

Time was ticking away the moments that make up the dog day. My path still had a long distance so short was my stay. Exploring was over for now there was other stops so I go now. My feet don’t feel heavy even though my big boots were on. The streets are a grid so I wouldn’t get lost. I needed a pic of the southern gate but didn’t think it would be so complicated to cross the street. The tunnel confused me just for a bit. I wasn’t going to buy a ticket to pass into it.

I went next to the bell tower once more to get some more of the chemical that helps make me go. With my cuppa in hand I had just enough time to make it to the hotel and wait. We were all there soon enough with a few stories. We all wanted to go to this next glorious city. We had a fun bus ride as we bantered and joked and got off to go into the station. We were stared at from all different sides as we sat on our bags but only the brave ones came for a chat.

We are now on the train the lights have gone out. It’s a signal for quiet so that we could nap for the next couple of days will be crazy at best. There are many activities that we can do and I plan on doing many of them. I should probably follow the call and close my eyes to begin nodding off.