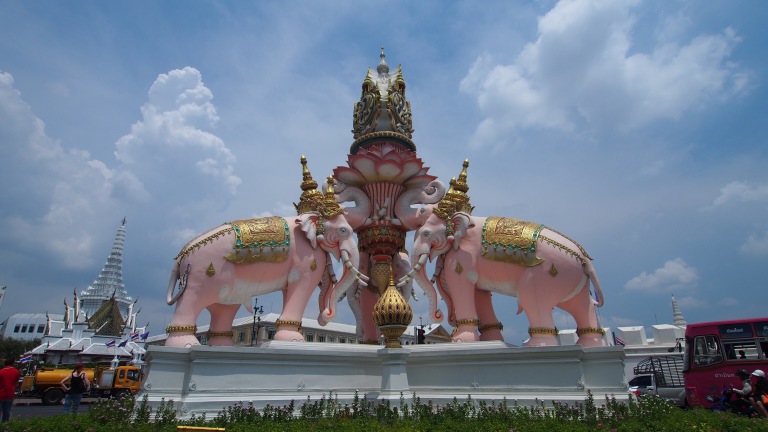 Just finished having breakfast. I woke up a few hours ago and watched the talking heads discussing the probable results of the election. I read my emails and got frustrated at one saying that none of the two references I provided have responded to the check that my new employer has requested. It means that since today is Friday I’m going to have to call them later. The time differences make this an excercise in coordination and planning. I remember checking the email addresses to make sure they are right. I don’t think my new employer called them over the phone. The time difference would mean that they would have to be up really early. I have to get this sorted today but I also want to see the sights that I haven’t yet over here. The initial emotion of this news will pass and I’ll get to it. London is six hours behind that gives me some time before I have to make the calls. I just hope they are there.

Funny how events can cloud the way you see things. One moment the sky is blue and happy and the next it’s hot and unbearable. I was on my way to see the palace and took the ferry through the canal. Got some help along the way from a soldier and some other locals. When I got off I was walking toward the place in the right direction and I looked at a map just to get my bearings. I was approached by a man and we got to talking and he asked if I saw the big Buddha yet or the Marble temple. He went on to say that he has a deal if I wanted to see those places. It was cheap and at the end the driver would take me to the palace. Sounds good I thought I’d get to see a few more things.

I don’t know if I should be angry at myself or the driver or the initial guy who talked me into taking this little tour. We went to the Big Buddha first and sure enough it is a big Buddha. The way I entered lead me through what I can only describe as a cemetery that was filled with urns containing monks that used to meditate here. 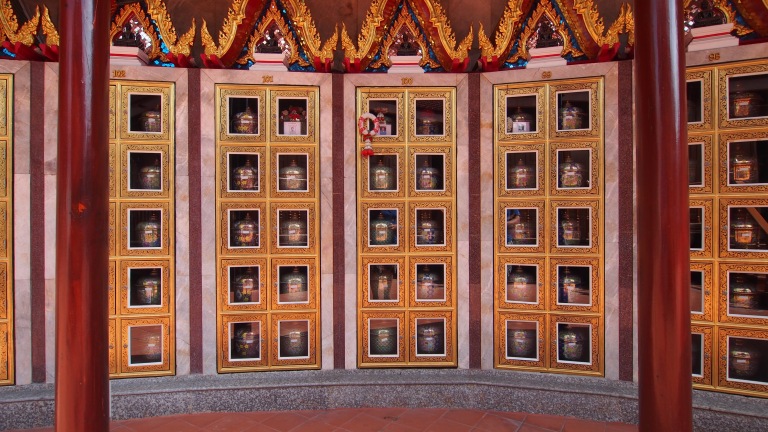 Then we went to see the gold Buddha. I had a chat with an attendant that was gracious and told me about the statue. It is the only one in Bangkok that is actually made of gold. It’s not painted but shaped from solid gold. I’m going to finish the rest of the story later as time for me is short right now. I got myself a coffee to cool down and rest before continuing on. 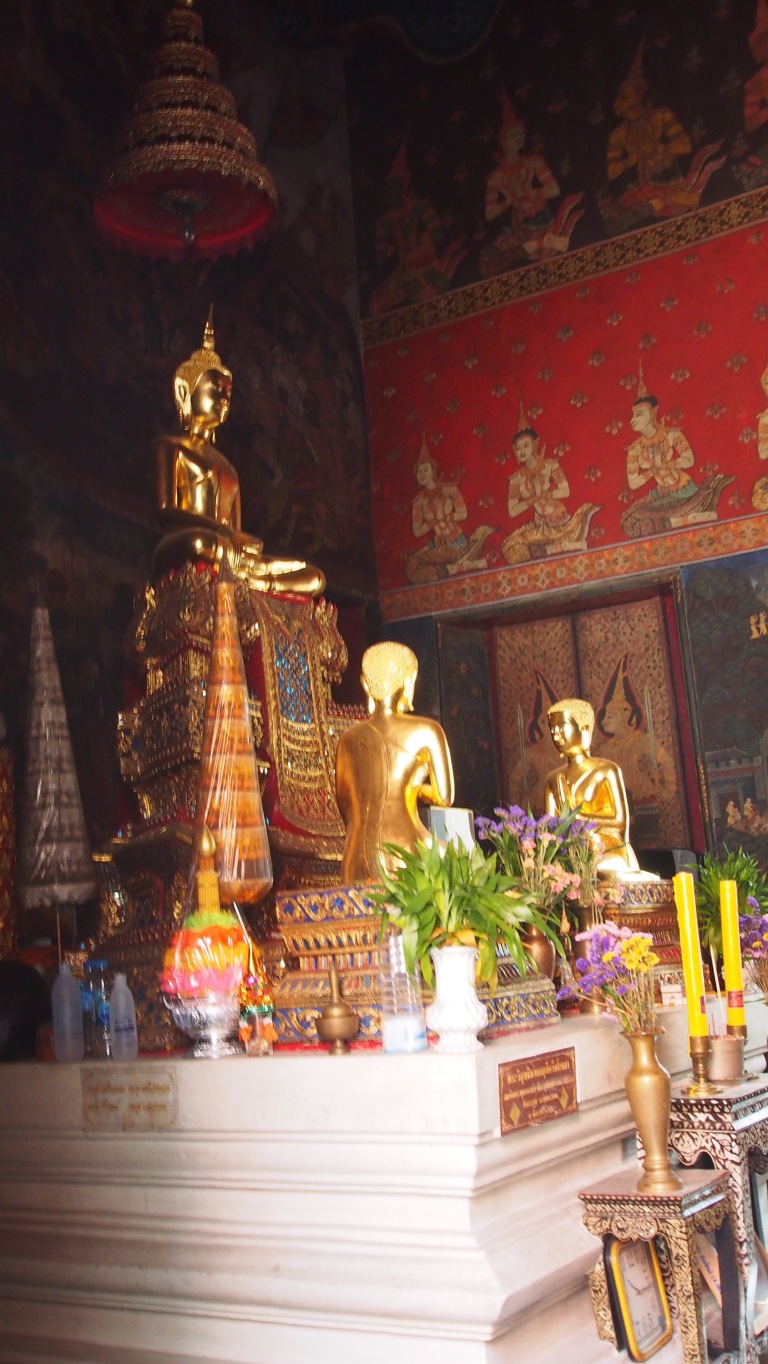 I’m sitting at the palace under cover from the thunderstorm that is now raging outside. The rains have come and the lightning strike nearby caused some women to shriek and shudder from the noise. Everyone here is under cover using all available space to huddle together away from the rain. We should be standing in it cooling off from the hot day. The colder air can really be felt now. 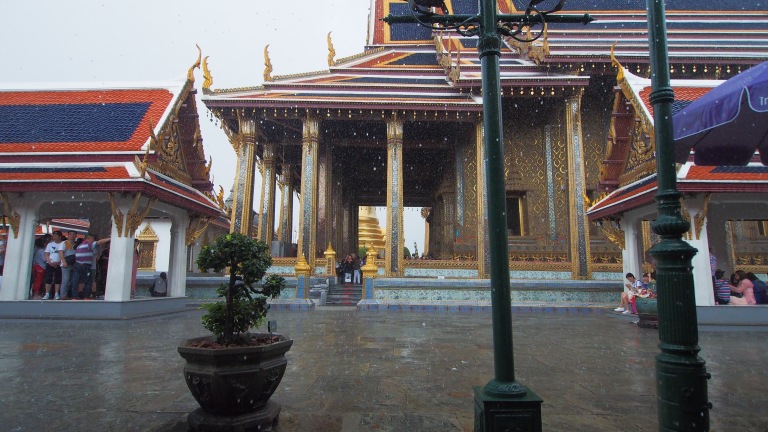 I might as well finish the story of my frustration this morning. After the golden Buddha the driver took me to a tailor. It’s part of some “promotion” where there is no tax paid on anything bought today. I told the driver I am not interested in anything but he took me there just to see. When I walked in the guy took me into a room and I straight up told him I’m traveling and the money I have is limited so I won’t be buying anything. I essentially walked out and we continued on. The driver said he gets a coupon if he brings people to the tailors and that since it’s a cheap ride he needs to supplement his income. He took me to one more tailor and I agreed to sit there longer. The price for a suit custom made to fit is about 300 USD. Not a bad price. They include shipping. Shirts custom made three for a hundo. I listened hmm-ed and umm-ed and left. I said to the driver that is the last place like that that I wanted to go.

The next stop was the marble temple and then the palace. The Marble Temple is actually quite nice the Buddha inside similar to other Buddhas I’ve seen elsewhere. What was unique in this place was the collection of Buddhas that were reproduced from statues. They had similar poses but with different styles. I looked around and took some time and as I was walking out I engaged in a conversation with this girl. We were both on the same kind of tour. We both got taken to the tailors. I was looking for my driver and he wasn’t anywhere to be found. The girl took off with hers before I could hitch a ride. I waited there for the driver. I spoke with the other drivers there and wanted to find out what happened. He essentially left. He wanted the other drivers to take me to the palace for a fee greater than the original ride. I knew I was getting a cheap deal and was going to essentially double the initial cost as a tip for being nice. I don’t appreciate being gouged. The driver had a smile on his face he knew what was going on. I told them to “fuck off” literally and walked off. I was quite angry at this point. I walked to the palace stopping for a coffee earlier. It’s the wasted time that I’m the most mad about.

The rain is slowly letting up. It’ll be time to leave this place soon.

Back at the hotel room. The ride here brought home one message “shower”. In this heat it is impossible not to sweat. I understand why people appear to be lazy just sitting around. Everyone sweats in this heat and humidity.

I rode home with a couple I met that are six months into their nine month trip. They have travelled South America and Africa already. I told them I was a bit jealous. They happen to be from Saskatoon Saskatchewan. Rare to meet people from there. We happened to be sitting next to each other waiting out the rain. They did an overland trek through Africa to Cape Town. They were having trouble adjusting to all the people around them. 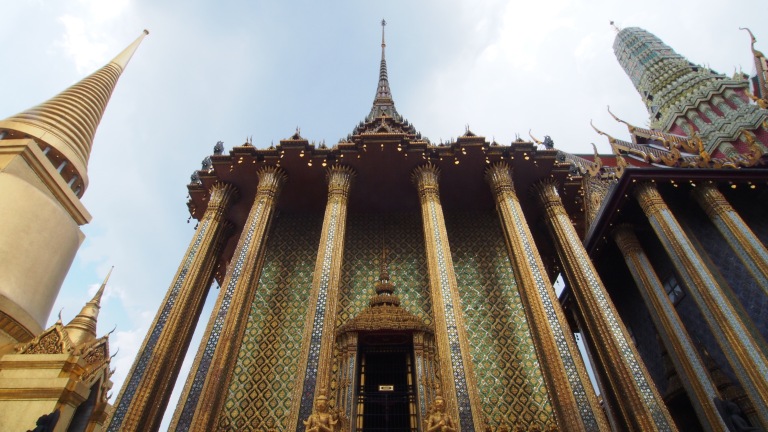 We had to return the clothes we put a deposit on. There is a requirement to wear long trousers. Women had to put on clothes as well. The Palace grounds hold the Emerald Buddha one of the most important religious objects in the country. There are no photos allowed in there but the altar that is set up in there is quite elaborate. The whole grounds where the religious buildings are found are very ornate. The myriad of patterns and color is a feast visually. There were a lot of tourists there taking in the sights.

It looks like there is going to be a majority government in the UK. It means that the currency will be worth more. The stock market FTSE has responded bygoing over seven thousand for the first time. A psychological barrier that has been hard to break. It makes me think of some things that I have to do related to the UK. 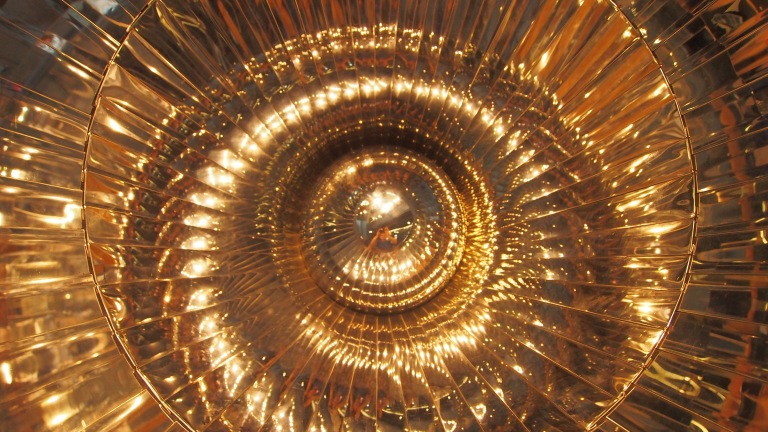 Spoke with one of my references and he said that no one has contacted him about me. I’m sitting at an outdoor restaurant and am about to enjoy a fine Thai meal.

That prawn appetizer was delicious. No time for foodie pictures as hunger took over and the instinct to eat overwhelmed my thoughts of documentation. It’s an outdoor restaurant that seems typical in Thailand except that this one seems to be a fine dining place with that street feel to it. It is fairly busy and the service is very good. I’ll take a photo of my main course that just arrived. 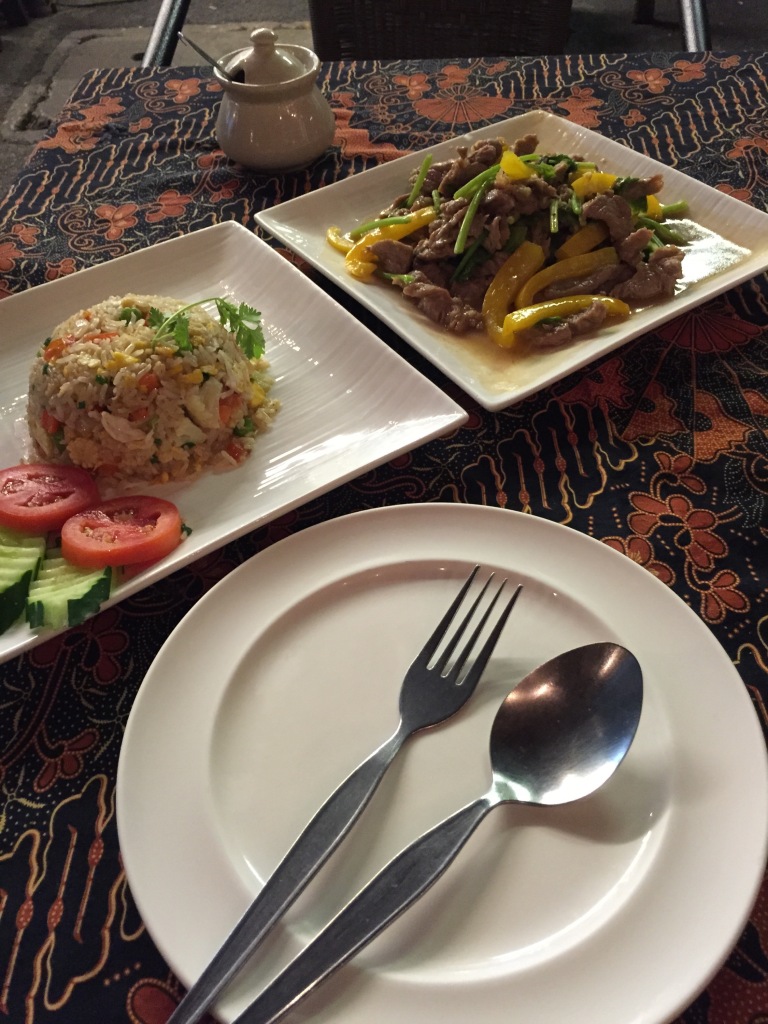 That was delicious. Maybe I was very hungry or maybe it was just that good. I sprinkled some of those chilies on the meal as I consumed it. It added that little bit of heat that burns so good in the mouth and perspirates the skin. The flavors were a bouquet of vegetable and beef and the rice fluffy and not too sticky absorbing the sauce. I really enjoyed that meal. Digesting it will be a pleasure.

I’ll probably pack and get ready for tomorrow’s journey to Hong Kong. I think I’ll have another drink somewhere afterwards as it is called for after today. I feel better now after all the trials and tribulations that the day has showered me with. The bill for the food was substantial as far as Thailand goes but it was worth it. It was my last dinner in Thailand this time around.

2135
Just having a few beers as I’m packing up. I should have taken a nap when I got back to the hotel. Tomorrow will be a trip into the unknown. Hong Kong is a big metropolis and there is an associated time difference to deal with. I’m looking forward to it. I’m now into the second half of my journey. I’m reflecting on things that I have seen and experienced as “Patience” by Guns ‘n’ Roses comes on. The words and melody have a significance to me. The V-Day ceremony finished and there is significance in that. My life has one foot in Europe and the other in North America. What a life with the body now in Asia…