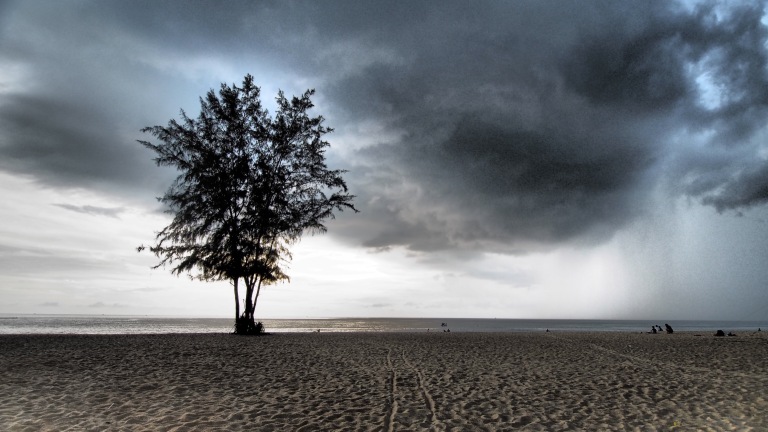 Going on three hours of sleep is necessary when there is a plane to catch at seven twenty-five in the morning. We made the calculation and in order to make it to the airport on time we had to leave by five. There seemed to be enough time but there is never enough when all those little details have to be packaged up to make it through the border on a plane. We wanted to have a full day in Phuket and the later options didn’t make that feasible. 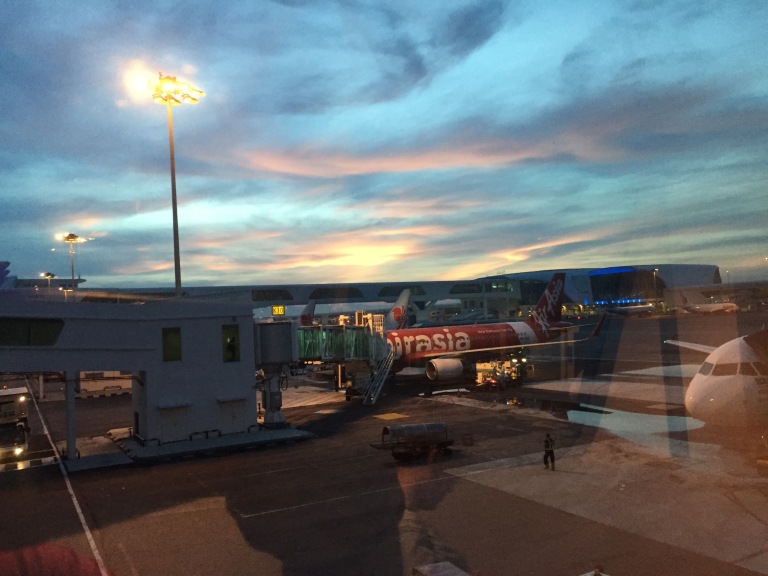 We made it on time but in a somewhat  zombie state. The plane took off a few minutes late and landed at seven forty-five in Phuket. There is a time zone change along the way. Kind of strange but who am I to say otherwise regarding such matters. Don’t remember much of the flight as it was barely a nap. As it came time to go through passport control I was trying to remember what I read about visa requirements. No matter they stamped my passport and let me in 😀.

The next step was figuring out how we were going to get to the hotel. The choice was between a taxi or a minibus.  We went with the minibus option as it was a lot cheaper. The two of us paid less than half the cost of a taxi ride. The other benefit was that it provided a source of mild amusement as one of the passengers kept having to stop and get out because she was car sick. The roads were curvy and the driver was aggressive in his approach to navigating them.

We ended up being his last stop. Our hotel is right on the beach and it has a pool that was being thouroughly enjoyed by the older guests who eyes us inquisitively. One of them is in a wheelchair and the pool allows him to stretch his legs and enjoy some mobility inside the pool. The temperature is a bit milder and much more pleasant than KL. Since we are planning on leaving early two days from now the hotel gave us breakfast. It was delicious and much needed as the journey sapped our glycogen stores and our energy levels were now replenished.

The first thing we did was change and lay in the sun periodically jumping into the warm Indian Ocean. The water provided much needed relief from the eleven a.m. sun that hung in the sky blasting us with unrelenting rays. I have a bit of a farmers tan and I have to work on evening up this discrepancy. A few days on the beach is just what can prescribed to remedy this problem.

I’m not much of a beach nut however I am enjoying this one. It’s the low season and the throngs of beach goers that normally contest these beaches are still working or might be in school and are probably planning on spending their time a bit closer to home as the weather is getting better. There are still people here from foreign lands and from the signage it looks like a lot of Russians like to frequent this place. We did a double take as we passed a local conversing in Russian with a customer. Interesting.

After the beach it was time to explore a bit of our surroundings and find some lunch/supper. As we walked along we saw many places to get massages as well as many eateries with a multitude of culinary options. There are a few resorts and a multitude of different hotels to choose from. As we got further along the road we commented that our hotel is in a great location. 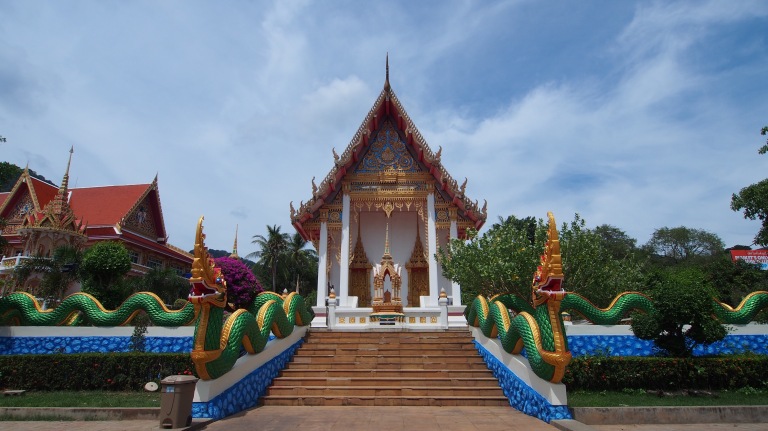 The temple along the road called out for a visit. It’s brightly colored exterior and intricate design beckoned to be photographed. It’s a Buddhist temple and having seen other examples in other regions it’s interestin to see the cultural impact on the same motifs found elsewhere. 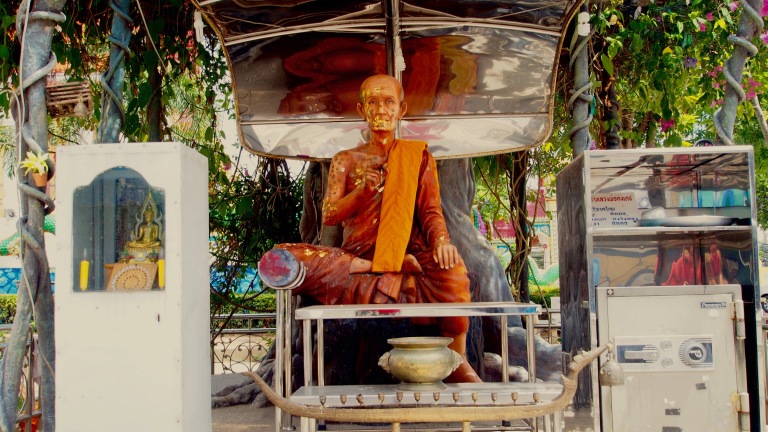 It was a neat place but it was time to move on. We were walking for a long time it seemed and consulting the trusty Trip Advisor map that can be conveniently downloaded for offline use we found a restaurant to eat in. As an aside I normally download an offline Google map but for some reason the maps for Malaysia and Thailand are unavailable to be saved this way. The process is a bit cumbersome and some digging around revealed this fact. The Trip Advisor app uses Google Maps and the GPS places you fairly close to where you are with the added bonus of data from the database filled with info about restaurants, hotels and places of interest.

The meal was delicious and the beer went down really well. We wallowed away a few hours in there enjoying the cool atmosphere provided by the awnings and the oscillating fans. We needed to move on as we had to find our way back to the beach. We decided to complete the journey going forward and not doubling back on the route that got us here.

The leisurely pace was interrupted by stops along the way of things that looked interesting. I also got a haircut at a barber along the road. There was a bit of a language issue but he understood number one on the sides and just a bit off the top. He did a great job and I’m happy with the result. 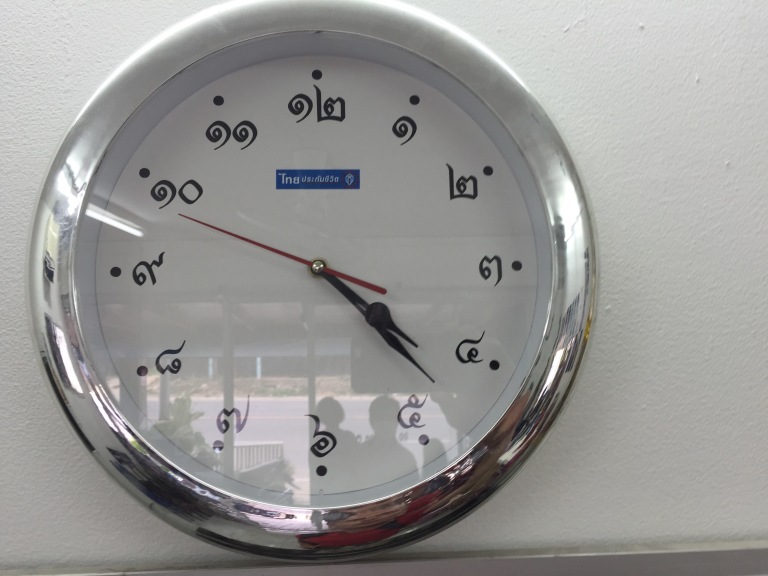 I must confess that I started falling asleep in the chair. The short night coupled with afternoon beers began taking a toll. The soft pop music he put on didn’t help much either. Curiously he also wore a mask during my haircut. Regardless it was a good experience and towards the end when he got the razor out for the final trim around the edges pumped me with a bit of adrenaline enough to wake me up a bit towards the finish. We bowed to each other as we left the shop.

The beach was not far away and soon we walked along the shore towards the place where we decided to get massages. The sun hung lower in the sky. The beach still had enough people to make it appear to be full of activity. The ocean waves crashing on the shore and our feet was warm. The parasailers periodically raced back and forth across the water providing an interesting spectacle every time.

The forecast called for thunder in the late afternoon and from our experience in KL we assumed that it was going to also mean a torrential downpour. We saw the clouds roll in from the east dark an ominous signaling a change from the sunny weather we have enjoyed up until now. We made our way to the massage place which was close to the temple photographed earlier. I must confess I’ve never had a Thai massage and didn’t really know what to expect. I know that it wasn’t going to be one of “those” massages. The price is very reasonable so why not. I have this knot in my right trapezius that has bothered me before so I opted for the back and shoulder massage.

When I got into the massage room I was to strip to my underwear and lay on my stomach with my head in the round recess. The lady massaged me for an hour and in some times contorting my body in ways to stretch certain muscles. I felt sore at the end of the session. I’ll see how I feel tomorrow. I may need a few more to loosen up the soreness that some parts feel.
We are enjoying the peace and relative quiet of this hotel. The waves can be heard crashing onto the beach in the distance as music from my first smartphone amplified by the shape of the bowl it’s sitting in fills the air with a variety of tunes from a bygone era.