There isn’t much time left before we fly out tomorrow to Phuket. We scrambled to get back to the hotel as we walked from the metro station. The skies opened up and the raindrops fell as if there was no physical restriction. In the ten or fifteen minutes that it took to get to the hotel we were soaked. It was kind of funny getting that soaked when it’s hot out. 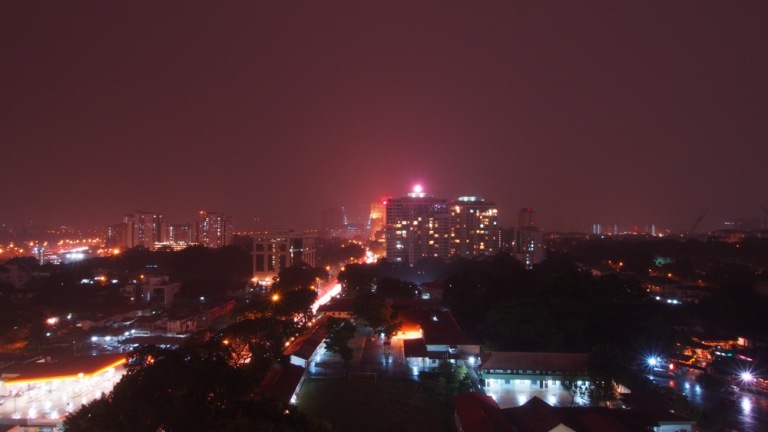 The day began with capturing the sunrise and then a few chores for me after breakfast. I stayed behind to finish them as my friend went to catch up with an old colleague that still lives in the city. I was going to experience the view from the Peteonas Towers as she shopped. We had a pre arranged meeting spot later on in the afternoon.

On my way I got an iced coffee from the Optimist Coffee joint outside a station. There were people taking photos with the slogans they had scribbled on their chalkboard. The stickers they had were a collection of different runs that they had made over time. All of them had some sort of positive message.

I have a thing for visiting tall buildings. They hold some kind of fascination for me. This one had a strict screening process that forced me to check my bag due to the tripod contained within. I had other things inside that I only realized I needed once I was up there snapping away with the rest of the tourists gawking at the view. Things seem so small from up there. The tower staff move things along quite quickly. The whole ordeal was over in forty-five minutes.

These towers are officially the seventh highest buildings in the world. They are the tallest twin buildings at 452 meters in height. There are two parts to the tour. The first is the walkway connecting the two towers which is ten minutes and the second is going up to the 86th floor for the view.

There is just enough time to take a few pictures and then take in the view for a bit before you are ushered along to the next stage of the program. I had to wait my turn to have my photo taken by a fellow tourist to show that I was there👋😌.

I was trying to see if I could find the hotel we are staying at but its blocked by other buildings. No matter I kind of enjoyed the experience as we were ushered for the descent. We met up for coffee as planned and set up the rest of our time together until Bangkok. What were we going to do for the rest of the day?

The plan was to walk through a nature reserve along the way to some graffiti I wanted to photograph. I spotted some of it from the metro as we were coming back from yesterday’s excursion. We came to find out that the reserve is private land that closes at six. We never walked through the lush forest. As we made our way towards the spot I thought the graffiti was at we were distracted by the neighborhoods we passed.

We meandered through some densely populated neighborhoods filled with all kinds of foreign shops. By foreign shops I mean not Malaysian.

They were filled with color and an atmosphere that kind of made me feel excited about being there. We never found the graffiti spot but we found something better I think and the markets we passed and ended up browsing offered tempting momentos for purchase if only I had more space to carry it all.

Our time was limited and the day’s activities were starting to make my friend weary. We had to pack as our flight takes off at 0725. We headed back pausing for short breaks finding our way to the metro station that would take up back close to the hotel.

The soaking didn’t dampen our spirits and we are ready for the next chapter in our journey.