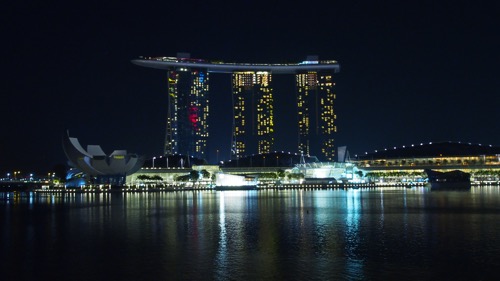 0630
Early in the morning jumped into the ride with Hari at the wheel to drop me off at a metro station. We had discussed this yesterday. It saves him from driving all the way out there and back plus I do have a fascination with public transport. I had ordered some room service so when I was checking out I expected to have a small bill. The total was not what I expected. I told the guy that’s too much. He said its for breakfast and I said it was included. The bill ended up being half of what he originally told me. I shook my head in disgust as I headed out of this shithole of a hotel. I’m debating in my mind how many stars I should give it when I eventually review it. 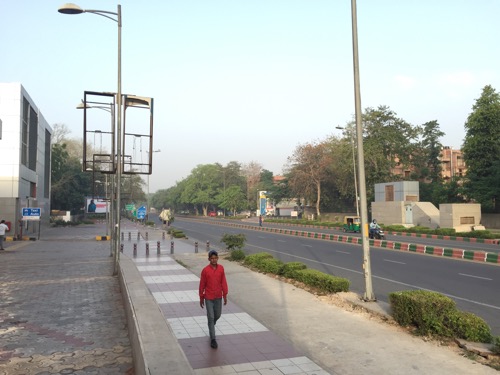 0711
At the metro station we said our goodbyes. Hari helped me down to the ticket booth of the metro. I don’t think he has been here too many times. He looked a bit bewildered when we were directed to buy the ticket from the machine. Getting into the station requires passage through airport style security. We were both searched upon entry. The station is a modernist nondescript space and the train itself is a new quiet and spacious entity. A lot of the distance is covered underground but some of it is above ground as it passes through some green space. The haze lay over this land giving it a mystical quality as we quietly zipped along the track. 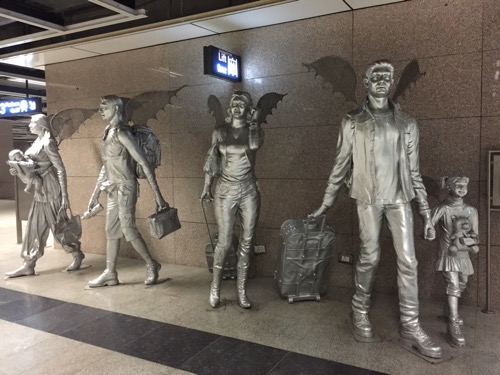 0745
Checked in and got my boarding pass. I still haven’t had a coffee yet so I decided to get one outside the terminal before going through the motions of checking in. Upon entering the airport your passport and itinerary are checked. Only passengers are allowed inside the building. I found the right line up and watched as an old couple skillfully cut in line and proceeded to take a long time to check in.

0836
Second coffee and from my most visited coffee chain brand a third with a breakfast sandwich. I was screened again after having my passport stamped with the exit date. I found the relaxation lounge and wished I kept my roach. The breakfast sandwich was delicious and I wondered why the same level of standard isn’t always found in their western locations.

0911
Flight leaves at 1000 but not boarding yet. Having another walk to prevent DVTs. Trying to send out a message on Twitter. The only option is to connect through the Starbucks wifi. You have to enter your number and they text you the access code. Good thing it’s free to receive SMS messages. 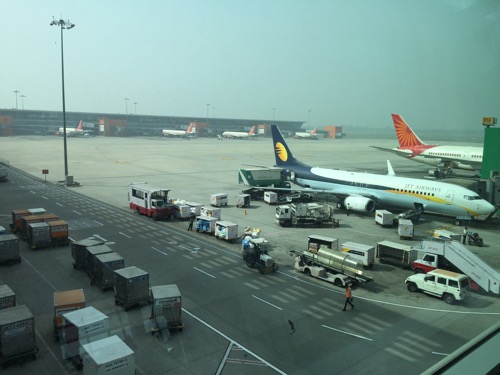 0937
Boarded the plane and found my seat. It’s by the window close to the back. I’m sharing the row with two other tourists. Both of them are female. The one sitting next to me is not feeling very well. She has some kind of a stomach thing. I comment that she should probably sit by the isle but she responds by saying that her friend uses the toilet more than she does. We eye the empty row in front of us. The girl next to me prepares for the flight by donning her eye mask and getting her neck pillow secured. Getting ready to pass out? She says she might soon. 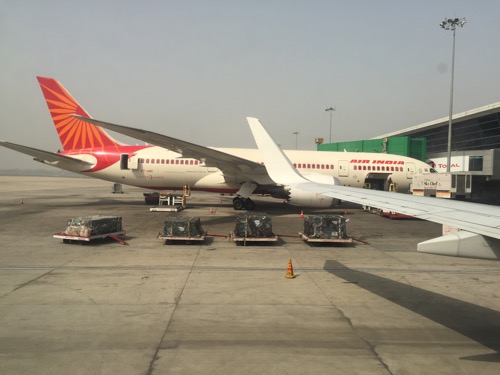 0955
The last passengers arrive to board the plane. It’s a family with two young kids. They occupy the row in front of us. We all look at each other in our row. So much for getting some space in these cramped quarters.

1001
The plane begins taxiing to the runway. We are all seated and the baby in front of us begins to cry as we watch the safety video. It’s interesting how the different airlines display this info.

1010
We are airborne. The haze that covers Delhi prevents a view of the horizon. The flight is almost six hours long.
1019
The family isn’t taking up all of their seats so the girl at the end of our row takes the isle seat and the girl beside me moves outward from the middle into the isle seat. I had a choice to move but I kind of like looking out the window.

1031
The refreshment cart rolls out from the back. It should get to our row soon. I could use some juice.
1042
The girl that moved rows has a drink spilled all over her. The guy in front of us was returning with his kid and accidentally bumped into the steward as he was passing the drink over. To top it all off there was whiskey in it. She had a good sense of humor about it.
1045
The steward apologized profusely and he suggested that she move to the back where there is another row that’s free. The two ladies decide to move to the back. I am now sitting in an empty row with all this space to myself.

1117
The dinner cart rolls by and the aroma of the food has gotten my gastric secretions flowing inciting a gurgling sound from my intestines.
1134
“As we are experiencing some turbulence please return to your seats and fasten your seatbelt. At this time please refrain from using the washroom.” The announcement relayed this message just after I finished my meal.
1153
They turn down the lights inside the cabin. It’s time for a nap 😀💤

1358
It was a good nap but it was broken up intermittently by the screams of the baby in front. He is quiet now passed out in his mothers arms. I am looking out the window at the strange cloud formations as we fly over a vast forest. My mind is thinking of what I have to do next and I’m also trying to put India behind me. This travel agent thing bothers me. It’s going to turn me into a citizen activist.
1424 in India but 1654 in Singapore
We are now flying over the ocean. The little ships in the water are few and far between. I’m trying to come to terms with what happened so that it doesn’t cloud the rest of my trip. I’m going to call the agent from Singapore and voice my displeasure. It’s a weak way to deal with the problem but I will ask him for some money back. If that doesn’t work I will start making complaints first with the tourism board, then with the police, and finally the people that really can do something about it the taxmen. 😐
1447/1717
It’s hard to know how fast we are flying until it hits home when you see another plane flying in the distance.

1455/1725
The reason this bothers me is that this is a legitimate business. If they do this to me they have done it to others. The other thing this illustrates is that westerners are seen as targets to be prayed upon. Maybe it’s some karmic payback for colonial rule but two wrongs don’t make a right in this case. Hari told me that tourism has gone down in recent years especially after the publicity surrounding rapes that have occurred there. I watched their president Modi make a long speech espousing the potential in India and how we can strengthen each other by building relationships both personal and in business. When I complained my room got bigger. The point is I shouldn’t of have had to complain and the room should have been in a different hotel altogether. I’m about to land. I think I’ve chewed on this crud for long enough. 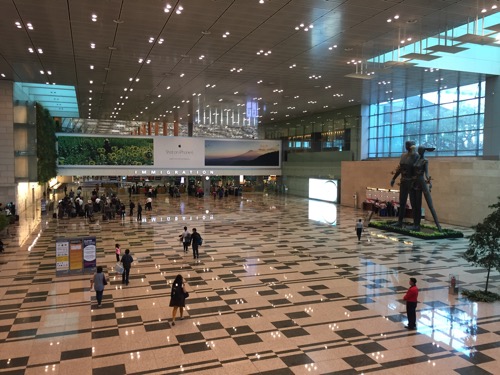 1912
Finally make it outside for some fresh air. I was inspected closer by the agents as I was heading out. They put my bags through the scanner and requested to look inside. What caught their attention was my e-cig. They are illegal in Singapore. I had to accompany the agent to an office where they courteously explained the reason for their action and gave me a receipt for the confiscation. They confiscated my backup so I’ll be ok.

1958
On the metro into the city. I’m impressed with the cleanliness and clarity of their system. I am going right into the heart of the city and the train is slowly filling up with passengers. There is an announcement regarding eating on the station platform or inside the train. Maybe there is something to that and the cleanliness. There are no papers flying about either. It just seems so well thought out and organized.
2004
As I look around I read “life doesn’t rewind” embezzled on someone’s bag. There is something to that.

2253
Had a shower, shaved, got them to fix the safe in my room, called India and got something to eat. Now I’m out walking around this city. It has a nice feel to it. The remnants of it colonial past are still present but there is so much more that has developed since.

2320
I’m at the waterfront looking at the view of the city in front of me. Couples sit or idly meander by all looking at the same view having quiet conversations in the privacy of the darkness that surrounds us. The illumination from the towers is enough to see what’s around. I have found a place to come to during the day where I can eat and explore some more. My hotel is in the heart of the city. I’ve come to understand what went wrong with India. I put my trust into someone else’s hands. Furthermore they were hands of someone I have hardly known and I knew deep down that I was making the wrong decision by buying into what was sold. It still doesn’t excuse the agent’s behavior but I have to take responsibility as well. Maybe that is the greater lesson to take out of it. Another piece of flesh for this lesson. I don’t want to compromise my good nature but I have to be a bit less trusting especially of locals with little to loose and much to gain. 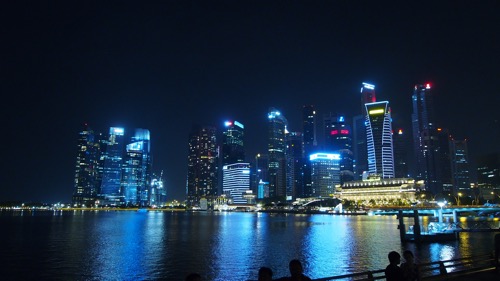