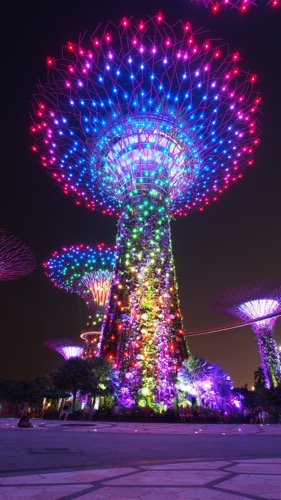 It’s been a while since I’ve been a night owl. The last two days have ended way past midnight. Maybe it’s been the push eastward maybe it’s because I’m on vacation. It’s not insomnia I think it may be the long conversation through the interweb.  The heat during the day is prohibitive to vigorous activity as well and there was an issue with uploading my images onto the blog. This has been sorted and I’m getting better at problem solving the problems.

There was a practical issue to sort out first though I needed new flip flops. Luckily for me there is a huge shopping center close by. This could wait until after my morning cuppa joe. To my surprise the little courtyard where the coffee shop is had a tent set up by a nutritional supplement company. They were showcasing healthy lifestyles through excercise. As I ate my breakfast and drank my coffee I periodically checked to see if they started their classes.

I bought my flip flops. I also walked around checking out some of the stores found within. They have all the shops found on the High Street and then some more. The place was busy too. I went back to my room and was sorting my blog issues and did some laundry. After a few hours I went out to walk around Marina Bay. This took up the rest of my day.

I had some more coffee and watched people out the window strolling about. The coffee shop was filled with young twentysomethings studying or something. The girl next to me was looking at handbags and taking selfies. I spent some time sorting the blog issue here too but this time I had a breakthrough.

The path along the boardwalk has great vistas of the bay that it borders. I kept finding interesting things like the statue of “The Thinking Man” by Rodin. I found it fitting and symbolic in light of my last couple of days. It’s a great statue and it looks like it’s genuine as it graces the space at the bottom of a Meryl Lynch building. 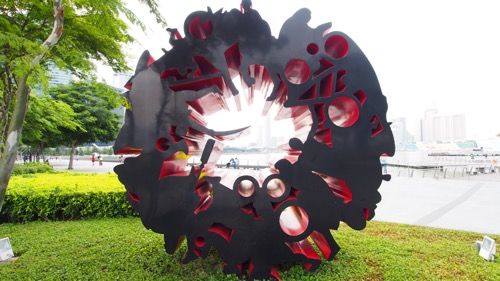 As I continued along I ended up noticing the way the sun was setting in a gap between the buildings. I quickly set up to capture it over time as the sun set. I ended up sitting there for over an hour marveling as the scene changed and people strolled by. This my time condensed into five seconds.

My goal was to make it to the botanical garden behind the Marina Bay Sands Hotel. This hotel is nice and it has a huge shopping complex at its base. It has all the luxury goods you could imagine.

I had to figure out how to get to the gardens as it wasn’t as easy as it looked on the map. This had the added benefit of taking me inside the hotel and taking in the view from inside.

The path to the gardens once on it, is straightforward. It brings you to an interesting sight. There are huge man made trees towering over the now dark canopy. It has this futuristic look and feel to it. 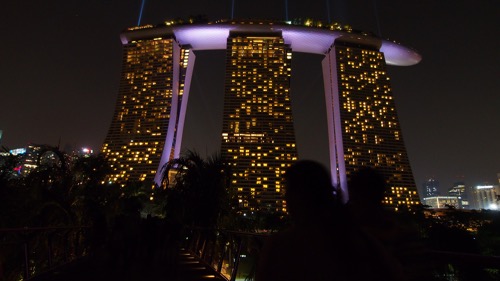 I made my way underneath them and waited for the lightship that was starting at 845. I took multiple shots that were all long exposure. It gave me some interesting results. Once that finished I decided to make my way back and get some food. There was an area by the bay that smelled great when I walked by it yesterday. I was making my way towards that area but as I left the hotel shopping complex I noticed people milling around the patio in front of the water. I soon found out that there is a show on the water. Since it was starting a few minutes I decided to wait for it. It didn’t disappoint. They used lasers and projectors to display images on the mist created by the spray. It had great results. 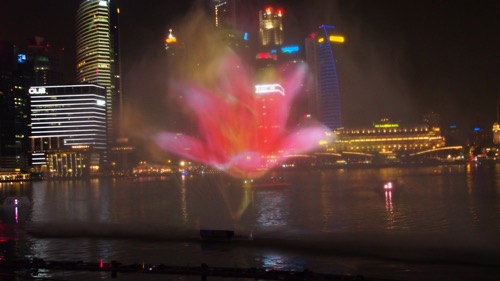 The show wasn’t long but there was a lot of public interest based on the numbers that also watched the show. Good timing on my part and I suspect that it was designed this way. I made my way to the outdoor food court. 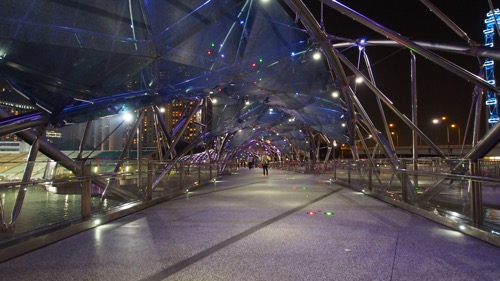 I had a delicious satay after seeing what is available. It actually was a difficult decision deciding what I wanted to eat. The whole place was packed with people. I made my way back noting that it was too late to buy alcohol in the store. The bars I passed were devoid of people. Besides I did feel tired. The rest of the night was spent putting the images together into a movie happy that I figured out how to do it. The app that I found is great for this but it is still time consuming. There was also a long conversation with Bernie as we finally connected over Skype. It’s time to sleep now. I feel relaxed after today 😀