When you travel sometimes you get a bit of insomnia. You wake up in a new city or maybe not but moving on comes fairly soon. Tracking time by days from a point and forgetting what day it is or month. I do know that my time here is numbered in hours and not in minutes. 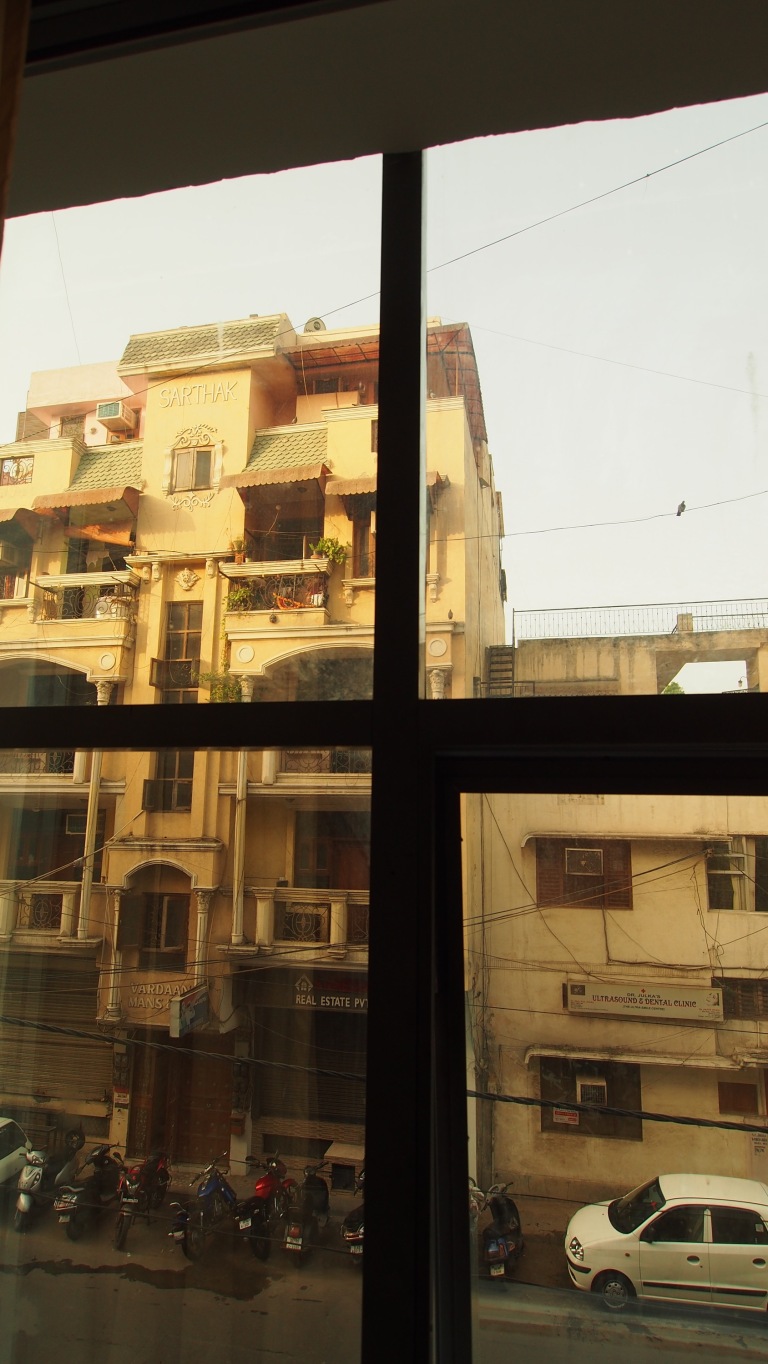 They brought breakfast to my room. It was actually pretty good. I had time to wake up at a leisurely pace and get ready for the day. As I write this I’m looking at the packing I have to do. In the morning however that wasn’t yet on the agenda. 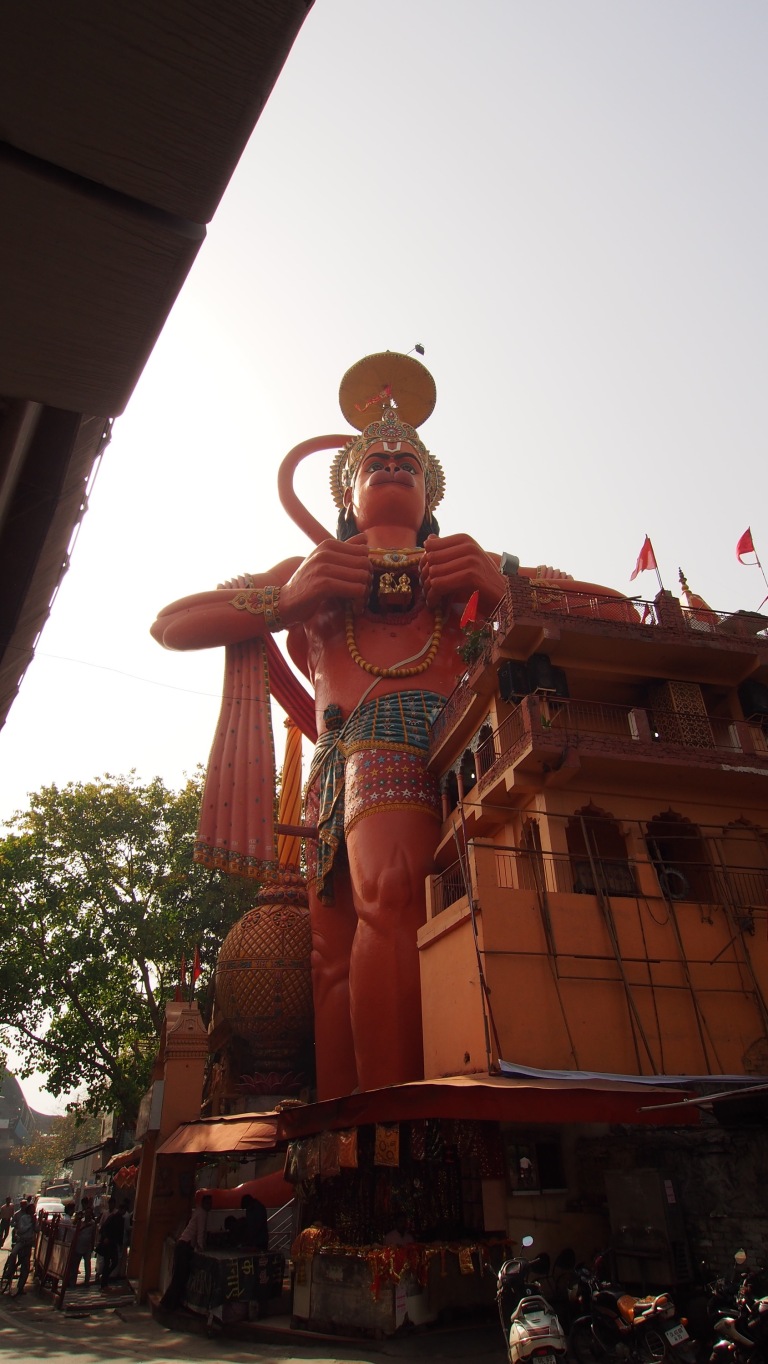 Hari met me right on time. We stopped to take a quick photo of the Monkey God statue by one of roads here. The traffic in the area is crazy and I thought to myself that I take a few chances for this art. The thing is hard to frame correctly since it is so tall.

1022
I’m waiting in a waiting room because I believe my lens cap fell off in the locker where I had to put in my camera and mobile. I’m visiting the Shree Lakshmi Narayan Madir in New Dehli. The couple behind me as I was leaving must have used the same locker as me. Here they are now. Well I thought It was them but it was the couple after them. They sure took their time but nice folks.

1313
Driving to get some food. Just visited a taj that predates the Taj Majal. I distracted Hari and now we are doubling back. Before that I visited the Indira Ghandi memorial museum and we drove by some important government buildings.

2015
Writing the blog listening to music and waiting for room service. The grilled sandwiches are alright. As I’m eating I wonder how I’m going to fill in the rest of the story. 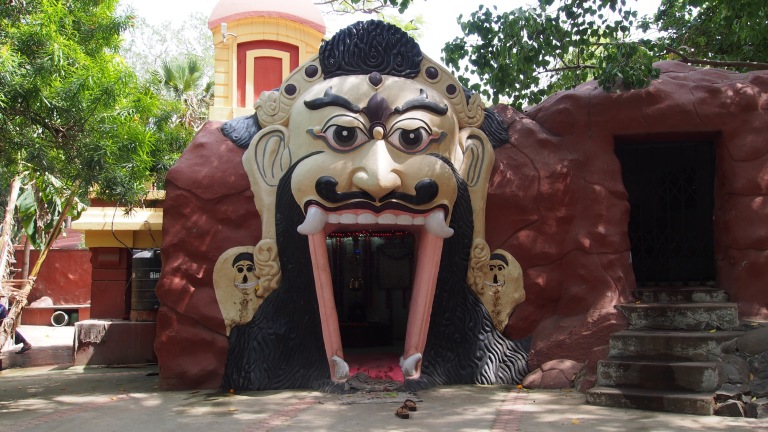 It was a hot day in Delhi today. It must have reached 36C. The first temple had a dramatic color scheme. Unfortunately no photographs of its interior are possible due to their strict enforcement of these rules. Hence why my camera and phone was in the locker. The space occupied had a magical glow to it created by the reflection from all the white marble and paint. Inside the reliefs and story boards spoke of the desire for growth and improvement. There was one quote stating the origin of the swastika and its role in the development of written language. As I write this now I’ve forgotten some of that wisdom.

The lens cap incident is my second such occurrence. Good thing I noticed now and not later. It took some time for that couple but I felt better after leaving that room happy that it was there. We drove to the Indira Ghandi Memorial next. It was a busy place. I guess it could be seen and India’s JFK except that the conspitacy was dealt with differently. The spot where she died is covered by glass.

Hari told me that after mourning came the Dark Days where the ethnic group  responsible were beaten, maimed, raped and killed. Her assassination was sparked by her decisions but the reaction had its own  repercussions. The Sikh population in Canada resulted from the events that happened here in 1984.

The next place we went to was Humayun’s Tomb. It is a pecursor to the Taj Mahal and is spectacular in its own right. I started feeling the sun here. The heat absorbed by the skin burning at times. It wasn’t overwhelming but it had a slowing effect.

It’s going to be difficult to top yesterday’s wonders. What this monument does is serve as the beginning to the development of some of the architecture that I’ve seen lately. The red sandstone the carving techniques the layout and style all came together here in this moseleum. The grounds it sits on once housed a vast array of other moseleums that have since been plundered for their material. These is some restoration work happening though.

The next destination was a newly opened temple called Swaminarayan Akshardham. This place was constructed in five years by workers from a neighboring province called Rajistan. I was there a couple of days ago. There is no electronic equipment allowed on the grounds whatsoever.

I got the one picture using another lens. The level of detail in the carvings was superb. Every surface of this big exposing structure was carved into some kind of shape. The vaulted domed ceilings had reliefs extended into and from the surface. The shadows and highlights created a pleasing symmetrical pattern looking up. The place told of the Guru who left his family at 11 and travelled all over India barefoot and naked and eventually becoming venerated for his wisdom. The fourth guru in succession built this temple to honor his guru’s teaching and example. It was something to see though. It would have been a great building to photograph. Sigh.

I also went to see the Mahatma Ghandi memorial spot where his ashes were spread. I forget the Indian term for it but the spot has significance. It was a crowded spot too. This man was responsible for much that happened in this country.

I even had a chance to get a pic of the Gate of India. Next time I’m here I’ll check it out further. The heat and malaise had reached me. The traffic here is quite intense here too. Delhi does have a different look and feel insofar as far as I’ve seen. Hari told me that Old Delhi is much more compact and dirty hard to maneuver in. I am touristed out for the day.