It’s the end of a grueling week. Sunshine is happily raining down its photons onto our region of the world illuminating all that surrounds us. What better than to go out and enjoy it?

On Friday afternoon after we finished our duties we took the bus to one of the malls south of us. There one if Chrl’s colleagues is involved in aerial silks. This is where one is suspended from the ceiling or some frame and using friction is suspended from fabric above the ground. Chrl said that she wanted to go and see her there as the mall was also having some sort of open house for the community. Malls here in Saskatoon act like community hubs as people are used to going there to socialize. These malls have more than just stores inside of them spaces are leased by businesses that are not just stores for sales but also for more imaginative endeavors.

We were going to a part of the city that we have not been to before way south of our address. We didn’t have anything to eat before jumping on the bus and there happened to be a BBQ serving free food to the community. We stood in this line for a while and it didn’t seem to be moving anywhere so we decided to just eat inside in the food court. We walked around the mall looking at all the different shops that were there eventually settling on one of the standard food court fares found inside. We were like tourists checking out the locals in their natural environment. 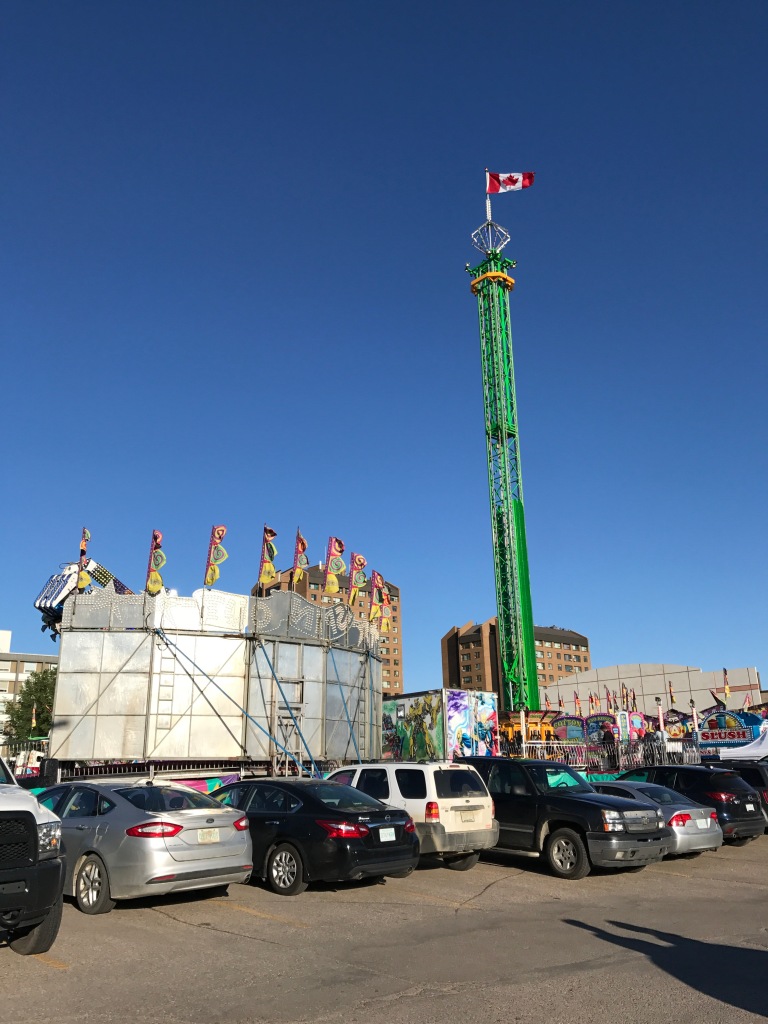 The mall is an older mall that has aged into a dated structure. Business determines what kind of shops will survive and judging by the stores that were there it wasn’t an upmarket area. We noticed that there were people going out to some sort of traveling amusement park that had set up outside. These traveling amusement parks seem to be a staple everywhere on the planet. Thrill seekers come from all walks of life and children seem to be the target here. As the sun was shining bright at this time it seemed like the place to be right now. I found my favorite amusement game… high striker (had to look up the name 😉)

At ten bucks for three swings it’s a hefty price to pay for a few seconds of amusement. The deal is that you get a prize no matter what. No big prizes if you hit the bell but I just wanted to hit it. One never really knows with these games at these carnival side shows. I’ve swung a sledgehammer in my days of yore and I would like to believe that my swing is good enough. This one is a little wonky based on my first swing almost had it. The second one was a bit off and the third hit the bell but there wasn’t a satisfying sound that I had hoped for.

Chrl wanted to try it as well. It kind of caught me by surprise but it is actually really cool that she is willing to do something like this. If she hits the bell on her first swing I will feel really embarrassed… The fast talking quebecois chimed in with words of encouragement

“Next time swing a little harder”

It was funny to hear him say that. Chrl managed to hit the target hard enough to make it go up halfway. That is pretty respectable. It was consistent too. Anyways everyone who swings the hammer gets to pick out a prize. I picked out this blow up double axe while Chrl picked out a sword. We were laughing and giggling jousting with out respective weapons trying to poke each other with the tip in order to elicit some giggles. My weapon of choice was no match against her sword. It didn’t have the rigidity to act as a practical weapon in real life hand to hand combat. I had to employ various techniques in order to defend myself against her offensive attack.

We laughed all the way back to the bus stop and lucked out on a bus to take us back to the city centre. We sat in the back proudly holding our individual weapons gently tapping them on our foreheads as a sign of playfulness. It was like a scene from the Graduate at the end when they sit there as the bus pulls away. For whatever reason that scene popped into my head when we were sitting there. We had another appointment scheduled for that night. We were going to sit outside the concert enclosure at the Bessborough while Amanda Marshall sang her songs. She is one of Chrl’s favorite singers having played an important role at some point in her life.

Saskatoon Jazzfest is an annual event in Saskatoon. It’s been going on for thirty-one years and it brings all kinds of artists to the city where they perform at various venues. There is one free stage and the main stage is at the Bessborough hotel outside in the garden. I am actually quite impressed with this setting as the hotel is a landmark in the city. It was built in the 1930’s during the Great Depression as a way of keeping people employed during the height of the great dust bowl.

We went out and checked out the area before the main act and scoped out a place where we could see the back of the stage sort of. It got kind of cold as the sun began to set so we came home to put on some more layers and then went back after having another shot of tequila to listen. There were a lot more people there than earlier. The bench we were cuddling on was taken over by another couple engaged in what we were doing before. We listened to a few songs and then decided to walk around the front to see what was happening. The concert sounded way better from the side. It probably had something to do with the acoustics of the place. We sat at an empty picnic bench and were soon joined by another older couple. Chrl and the woman got into a discussion and they were on the opposite side of the spectrum when it came to certain social issues. They ended their discussion amicably and we listened to the rest of the set staring at the bushes huddling close for warmth. It was a fun day for us and we slept well that night.