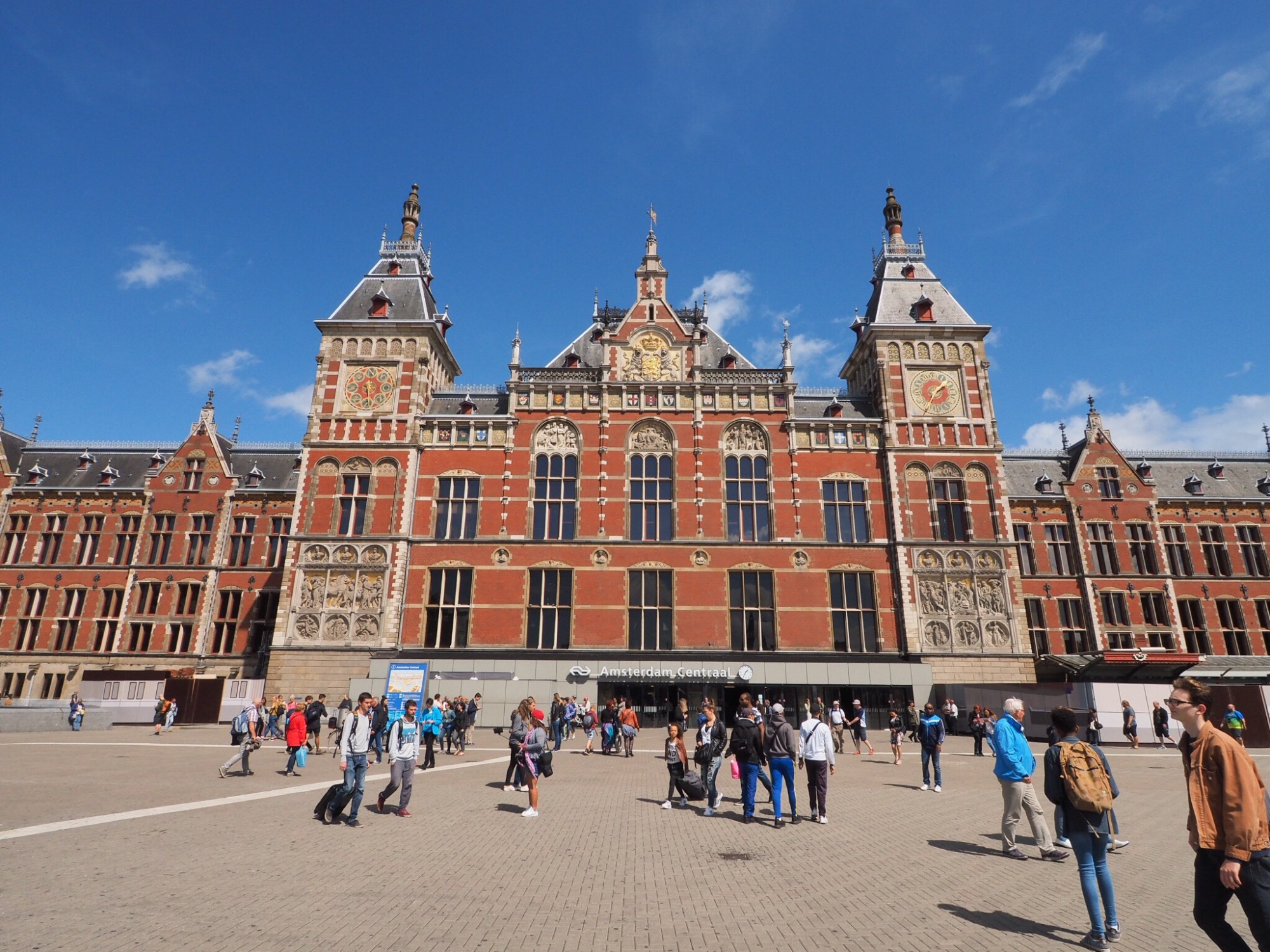 Our scheduled departure time was 0855. With the necessary security procedures taking about thirty minutes gives us 0825 as the absolute latest we should be there. We agreed to leave by seven in the morning to get there and have some breakfast before we get on the train. It was a nice day for travel. 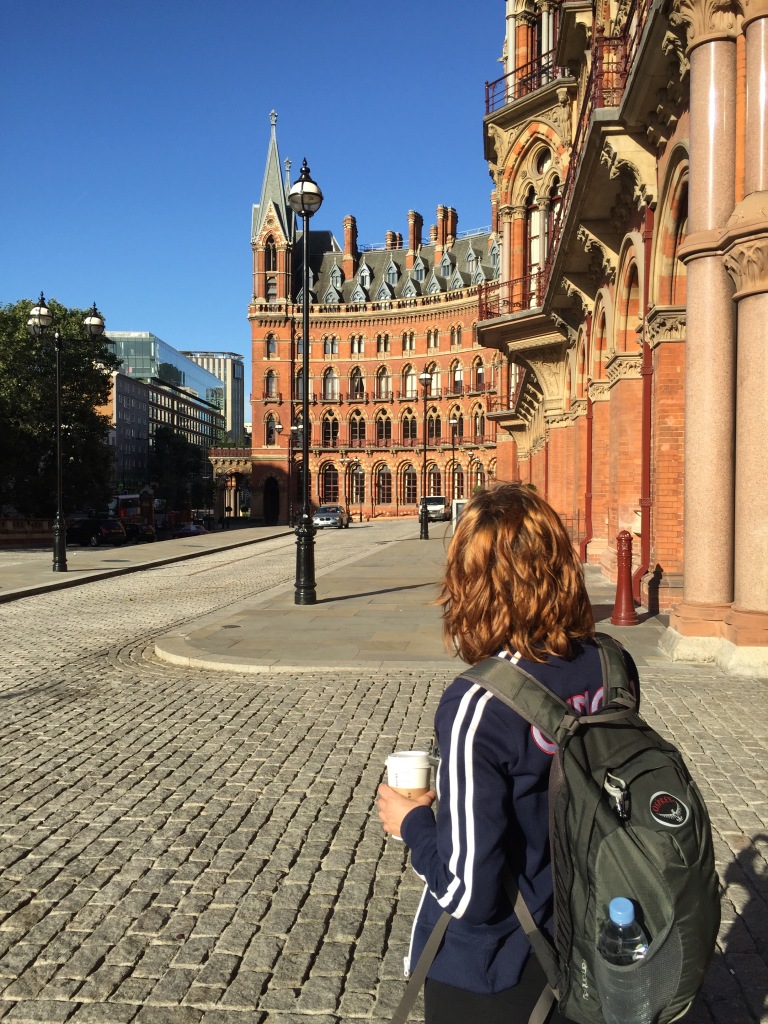 It’s nice being close by a tube station. A short walk wheeling our luggage through the early morning Monday crowd. It is a time in the morning just before many people get on for their commute. There is an elevator that takes you down to the trains. The ride down was tense with all the people inside of the car. We had each other to giggle with during our descent. Going to the continent feels exciting. The northern line got us to St Pancras and we admired the station while having breakfast and finding the giant statue of the reuniting couple. It’s shape but more importantly it’s scale leaves a bewildering feeling. There is a sensuousness to it that I can relate to as the days I’ve spent waiting for this trip clicked by. We closely recreated that first gaze into each other’s eyes at the airport. It’s one of the statues around London that Inwanted to show Chrl. It has that romantic feel to it or at least that feeling one gets when you haven’t seen someone you are close to for a long long time. 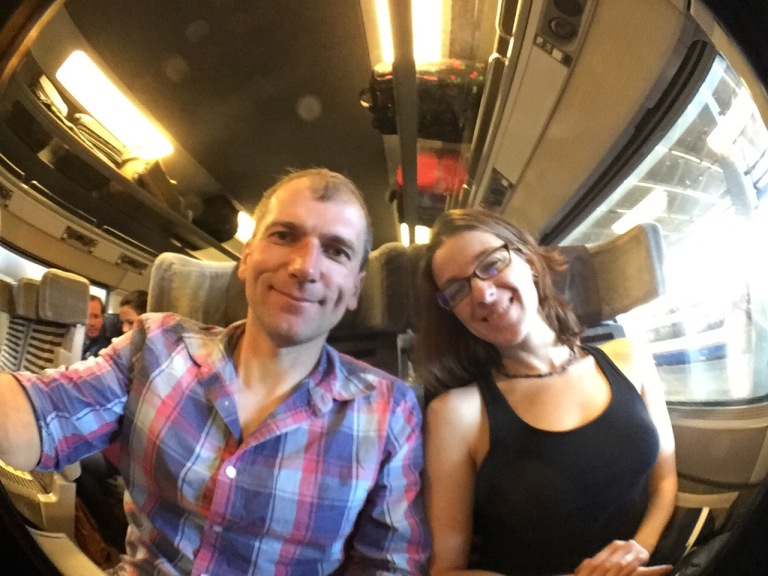 With the recent events in Europe it’s understandable that border checks would be happening. The security with respect to baggage screening is understandable. The French set up a passport check directly behind the border exit check. We had about ten minutes inside the area before they called for boarding. A lot of people got up for this train. It was a long train but that allows it to carry many people in better comfort than on a plane. I’ve never taken a Eurostar train and even though we are heading to Brussels and not Paris now I’m looking forward to this ride. 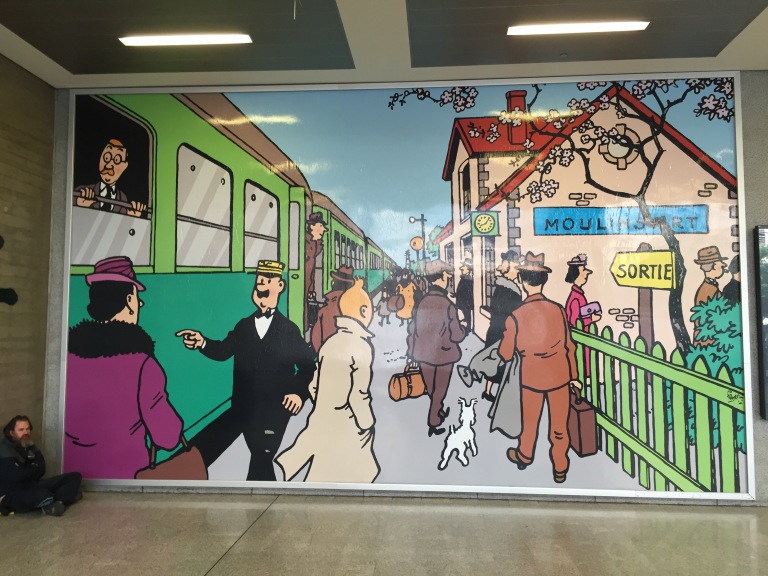 We were on an older train and the seats had that well worn look to them. Chrl liked the comfort of the seats as well as the generous fold down table that lowered from the seat ahead of us. It allowed her to work on her projects for school that is slowly approaching its conclusion. We knew that this was going to be factored into the trip. I admire that she is able to focus while being here. They are distance education courses so there is no need to be in a class. They do however require time to complete the material. Our time in Amsterdam will be a bit more laid back so she will have some time to focus on it. 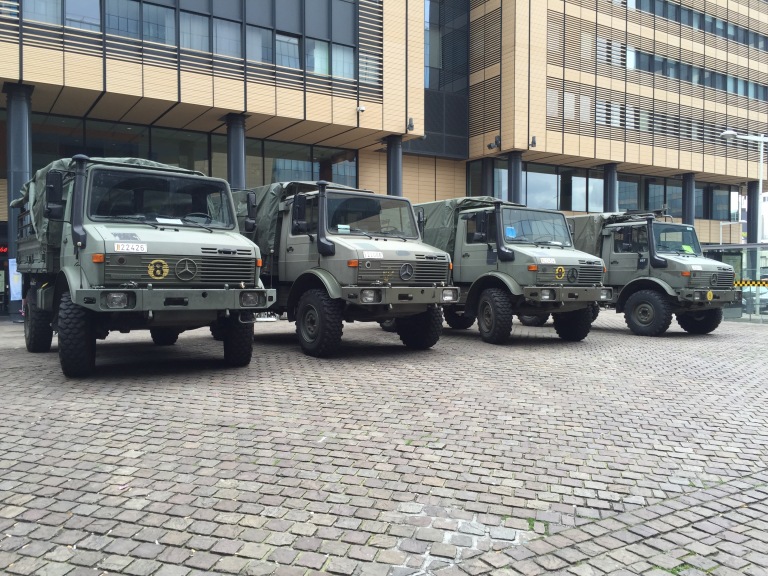 The countryside passed by giving a new vista every second of its movement. That is when we weren’t in the Chunnel. We both sat working and getting distracted by what was around us. The journey to Brussels took just under two hours. Once there we took another train to Amsterdam. There was visible security at the station. A row of military trucks lined up in front of the entrance two armed military at the entrance guarding, watching. 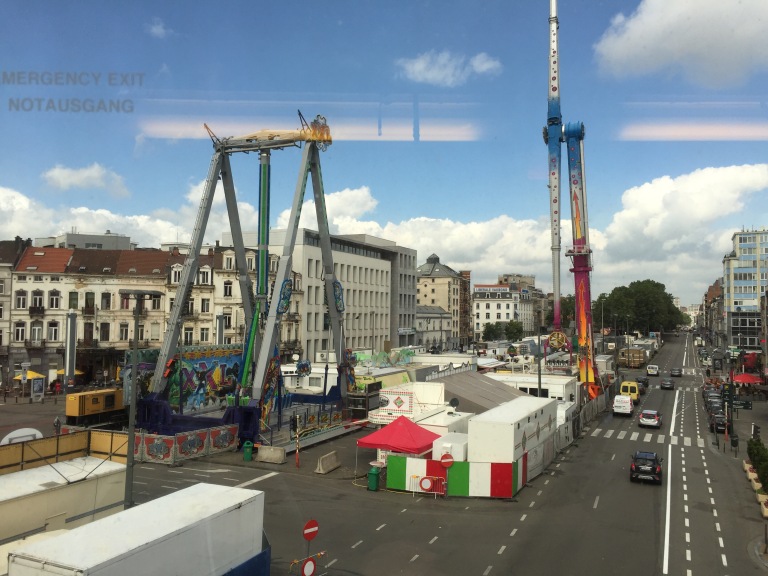 As we approached the platform to catch the train to Amsterdam the cops were asking a youth to show them his ticket. He had some piece of paper and looked a bit worse for wear. The three cops were trying to remove him without causing a scene by tugging his sleeve in the direction they wanted him to go. He had no chance against them. 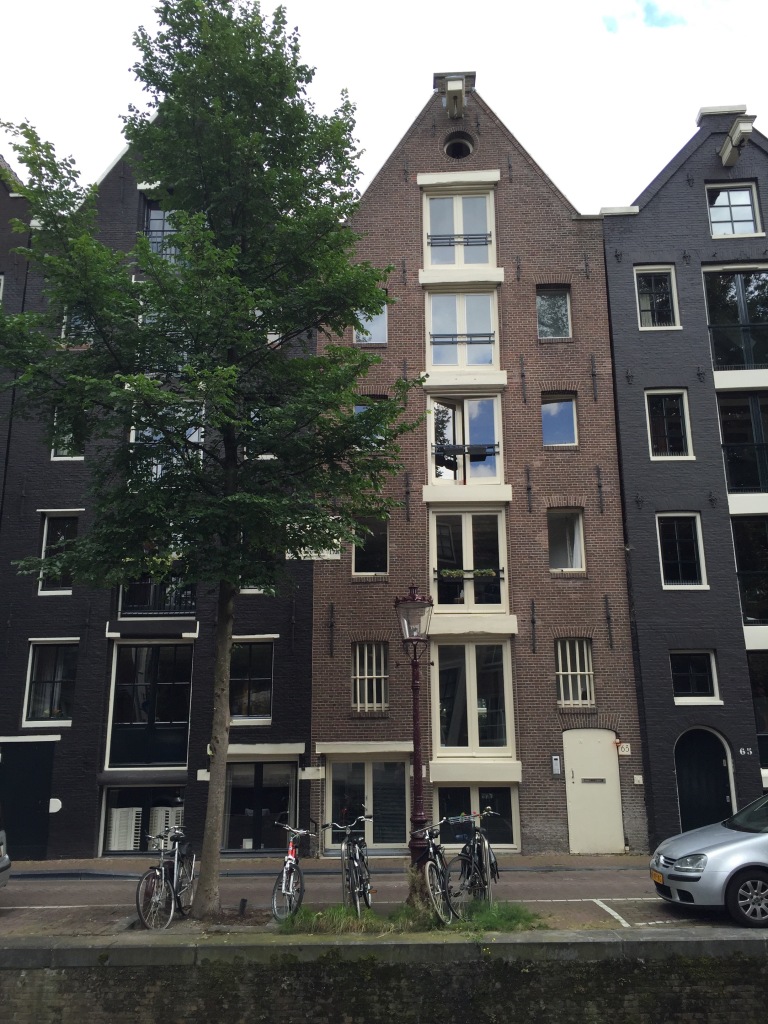 The platform was full of people and we stopped somewhere in the middle of the crowd once we found the right platform area. Everyone had a lot of big luggage. Once the train arrived we rushed to our carriage and we got there before a lot of people. The luggage we have fit in the overhead compartment. The ticket/boarding attendant lady wasn’t taking any shit. She started yelling at someone who left tiny backpacks there. “Whose carry on is this!? Take it away!” These two sheepish looking young women got mad at the inconvenience of having to collect their stuff. The lady was right though those bags didn’t belong there. There was just too much luggage that people had with them. 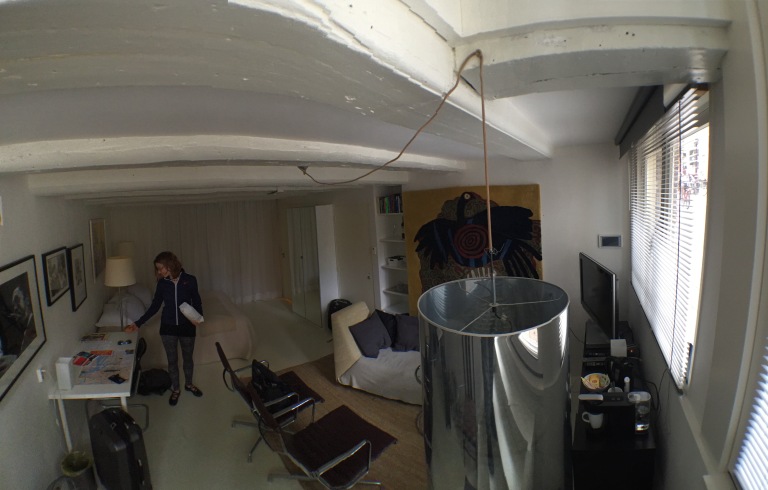 The ride there was nice but hunger began to creep in so I went to find the food car. I walked quite a distance in the swaying train dodging man spread and card games. The seats are large but not large enough for some. There is always some temporary eye contact as one makes their way through the carriages. Space doors open with that “kh-tsss!” sound. The final stop had overpriced sandwitches that didn’t quite do the job for us. The crisps helped though. 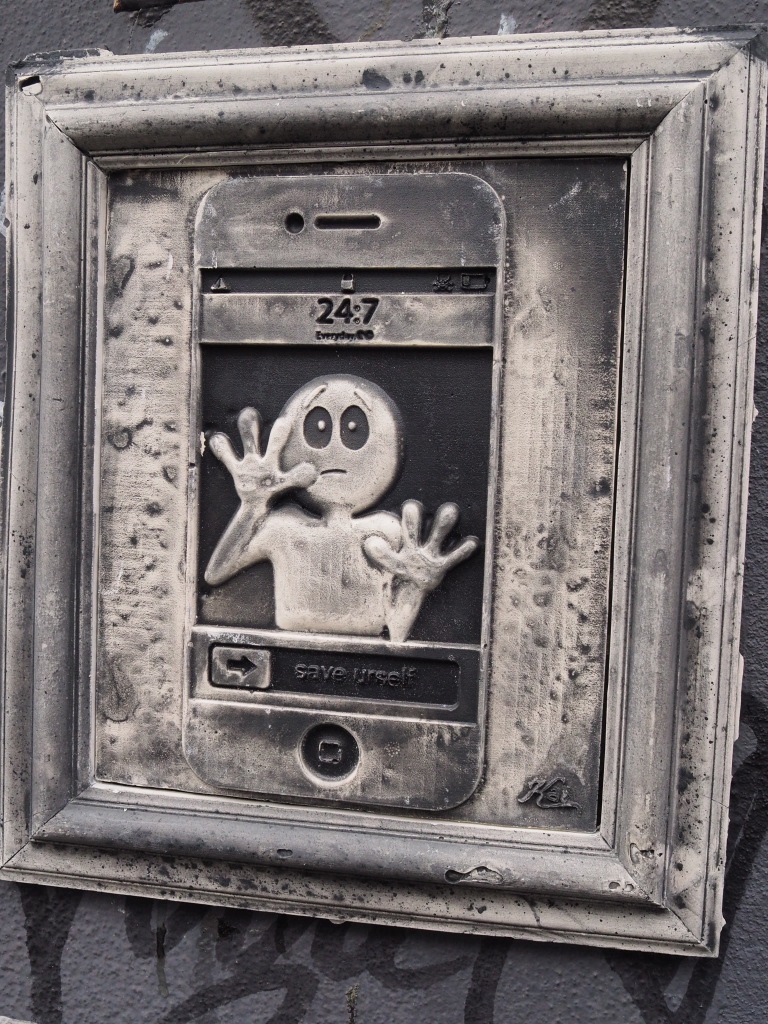 As we alighted from the train we had to jump over the pile of luggage blocking the door to exit. I was the first one out Chrl followed and the guy behind her almost lost his balance getting off. He daftly took an extra few steps and his expression of laughter at the mess signaled that he was alright. “Here we are!” As the light and sound of the space in front of the station assulted our senses. “Velkom to Amsterdam babe!”

The flat we are staying in is near Nieuwmarkt making it easily walkable from the station. It’s been a while since I’ve been here but I kinda knew where we needed to go. My offline map helped too. Chrl could just follow and take in the sights and sounds of the city centre. This place has a charm that few places in the world have. I find the place very peaceful even amidst the chaos of the crowds. My favorite time to explore this city is in the morning before the crowds. 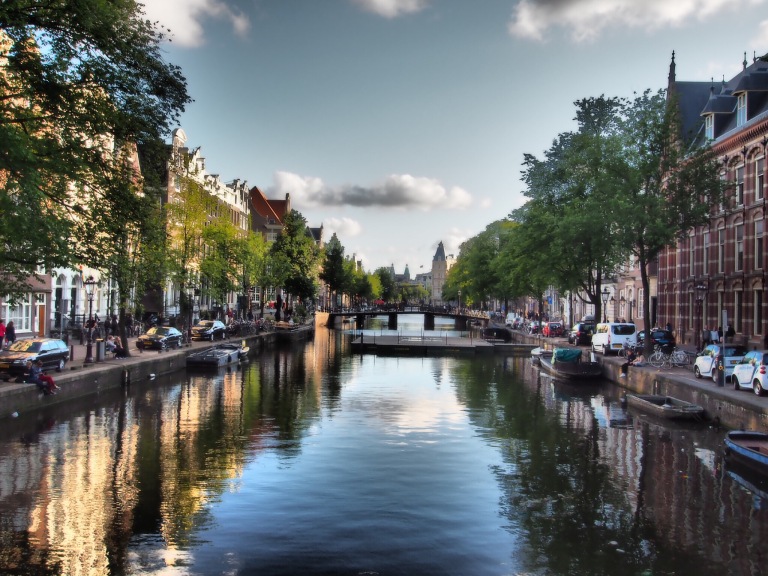 Our host came as soon as we rang the bell. He was a friendly chap eager to show us all the amenities that will be available to us during our stay here. This is a stylish pad. It’s a basement space with its own bathroom and mini fridge. He even threw in a bottle of wine for us to enjoy. Chrl was a bit overwhelmed with the charm of this space. We will be staying here for four nights and I made sure that we got something that we can recharge in. She has a bit of work to get through and she suggested that she do as much as she can the next day. We talked about this as we dined on some Thai food and did a cursory walk through the city. We consulted a map a few times so that she knows where we are going and how to get to where we live. A purposeful “getting lost in the city.” 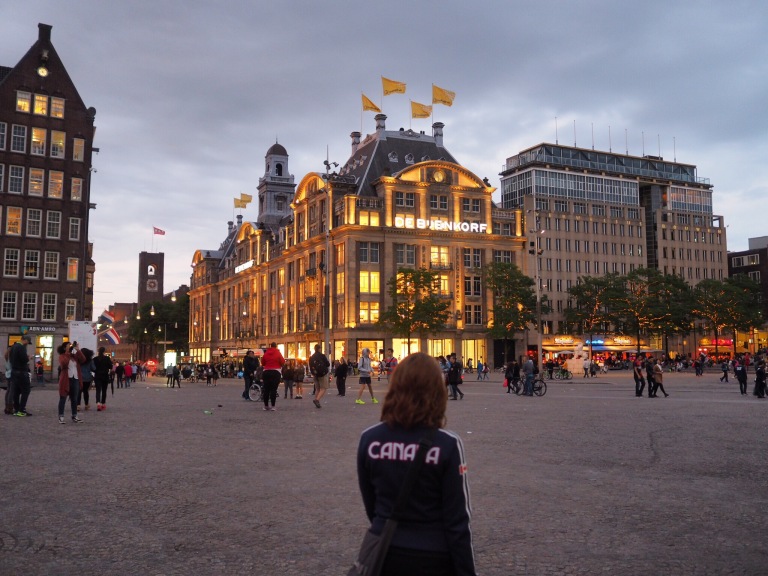 We strolled through town stopping at some windows to check out a display or some fancy shoes. We talked about things as it came up. This place is famous for its liberal attitude with respect to drugs and sex. Any couple has to discuss these issues and their implications for the relationship. Being out here together and having the time as well as each other’s presence and attention it fosters a particularly honest evaluation of these issues. We are both appreciative of each other’s honesty. It brings us closer together. 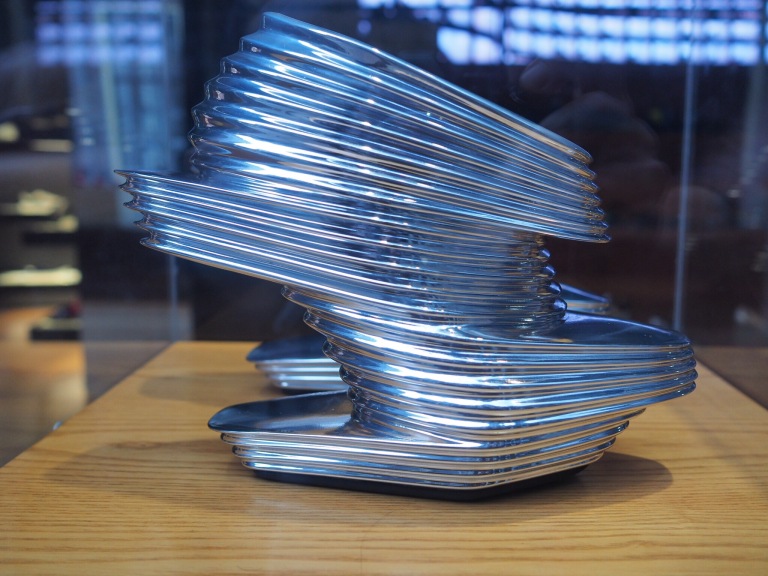 I wake up when I’m no longer tired but my partner needed more time. There wasn’t much to see. Rain began to fall early in the morning and it periodically fell quite heavily. The forecast said that it would go away later on. If Chrl was studying I could take care of things myself. There was some laundry to do as well as getting transport arranged for Paris, our next destination. After breakfast I headed off to do those amongst other things. The sun came out after the tickets were bought. I stopped at this coffee place that just oozed feminine energy. I wanted a coffee and a good wifi connection to take care of some business. I’m going to bring Chrl here and leave her there as she studies. She likes a quirky coffee shop. 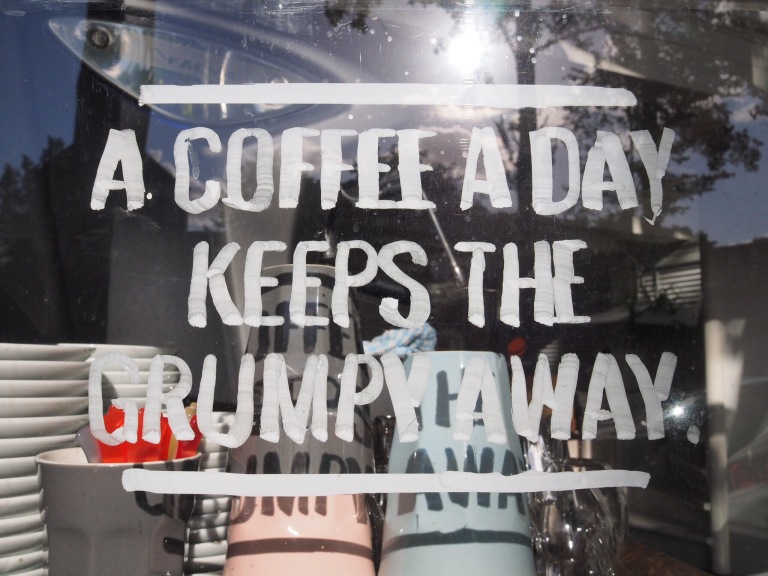 Once that stuff was taken care of it was time to pick up the laundry and meet up with Chrl. She was happy to see me and it looked like she was productive with her time. She needs to have a break and we wanted to go and see a Banksy exhibit that was happening in town. Many of his famous prints were on exhibit and we could get a snack along the way there. Banksy needs no introduction his anonymous fame grew from his subversive and challenging pieces that are the modern incarnation of conceptual art through the medium of #streetart. 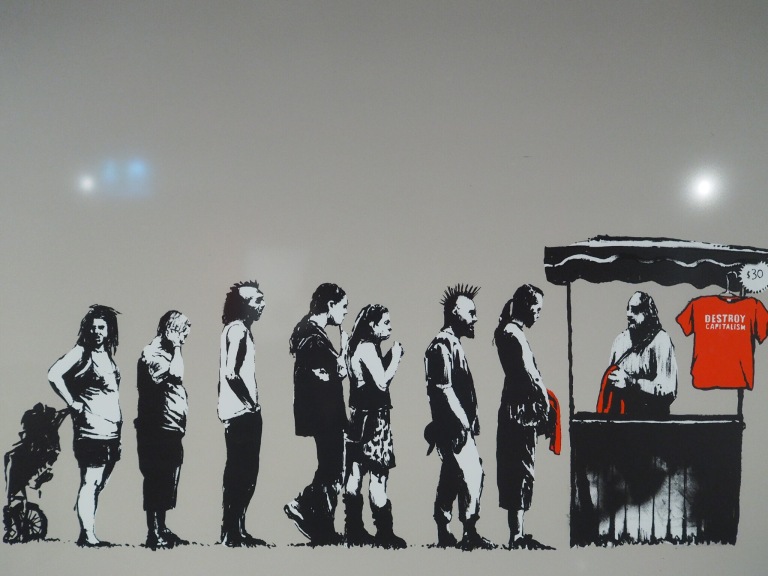 It was a cool exhibition but we both agreed that the meaning behind some of the pieces differed in how we viewed their meaning. I guess modern art interpretation has to do with subjective projection of our experiences into it. The controversy that he fosters brings attention to the message he is trying to convey. It is a challenge to deal with the issues that it raises as well as debate about the state of our planet.