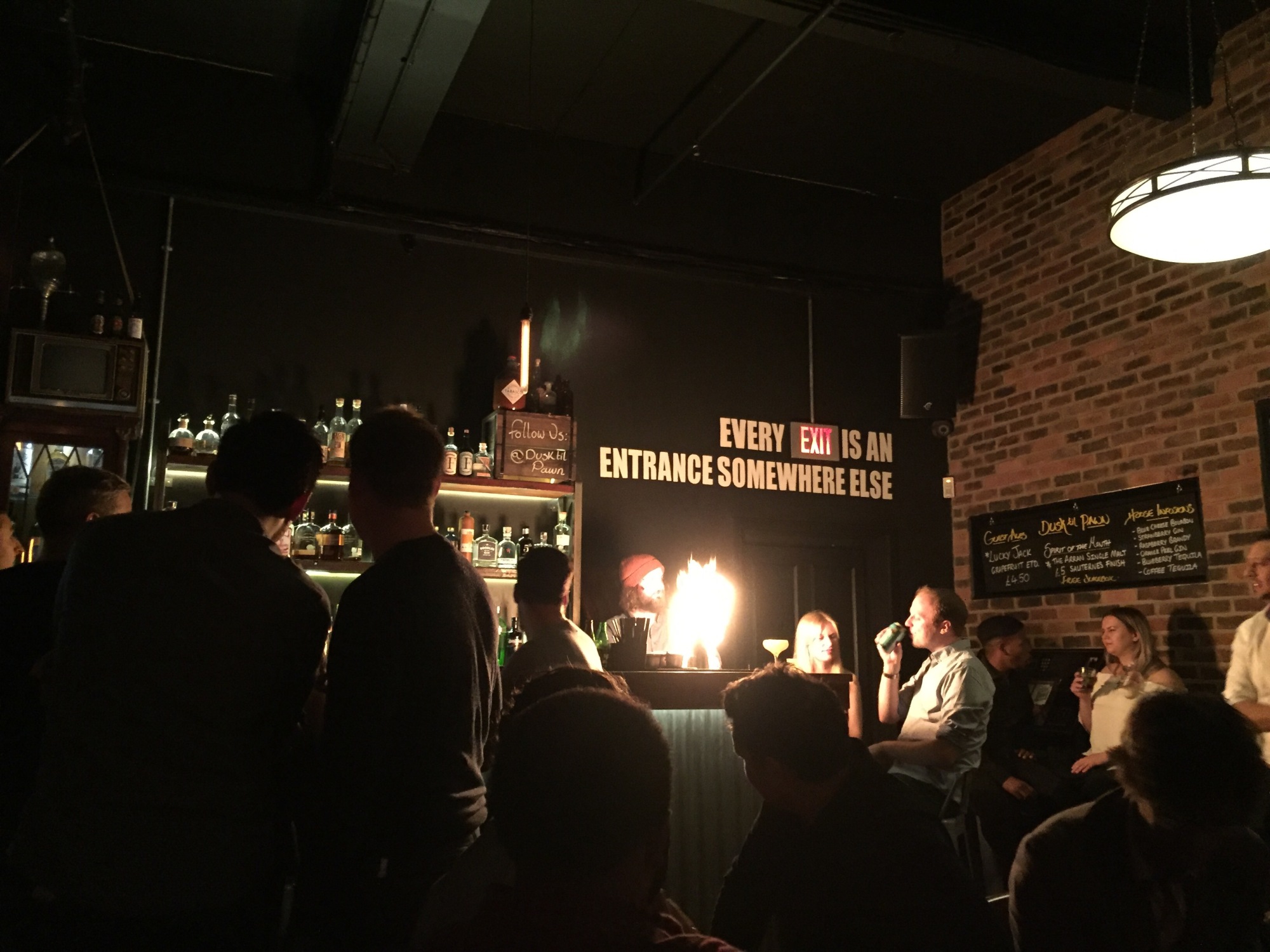 Friday afternoon at precisely four-thirty I was out the door. The day wasn’t as smooth as I had hoped. There was a slight issue that developed between myself and another colleague that kind of changed the mood for the rest of the day. It was a bit of an insult as to how it played out but such is the nature of work sometimes. I knew what lay ahead of me when I left. Bernie was waiting outside in the temporary parking spot. He had only arrived a few minutes earlier good timing. When I got in we shook hands and drove away as quickly as the traffic allowed. 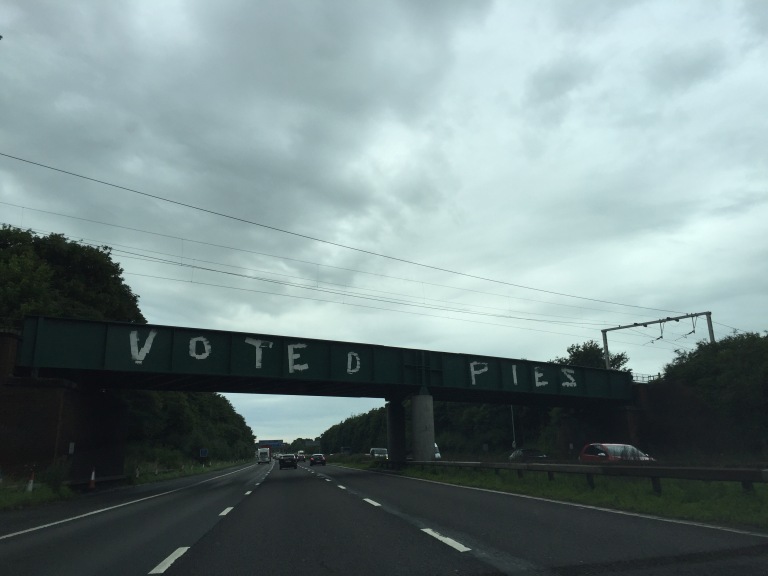 We drive to Stafford to pick up my stuff as Bernie was curious to see how I’ve been living. My dated living quarters harkened back to a different time in the UK. The color scheme and layout of the housing complex held some weird curiosity. He wondered aloud how I managed to keep my sanity. I told him the same way he kept his when he was living in the bright orange hotel rooms n his past.

The drive south to Stafford was easy and the drive back up to Manchester was interrupted by periodic jams on the motorway usually after a junction. Traffic was quite heavy at times as people rushed to get somewhere after a long week at work. We were the same driving with loud music blaring from the speakers curated from the oldies still on my phone. We caught up on the happenings in our lives and the things happening in the world.

We were going to be staying at some flat found on the web. One of those new services that allows people to rent out their space to others. It was in a modern building just north of the northern quarter. The view from the seventh floor was nice and the gloomy clouds were slowly dissipating in the setting sun.

We were hungry and thirsty after the drive. Bernie especially so as he had been on the road for seven hours. He left work at lunchtime in order to make it to Stoke in time to pick me up. We had been talking about hanging out one weekend and it has been getting postponed for one reason or another. With a growing family and various commitments it is hard for schedules to coincide together. Bernie didn’t want me to spend my birthday in Stafford. 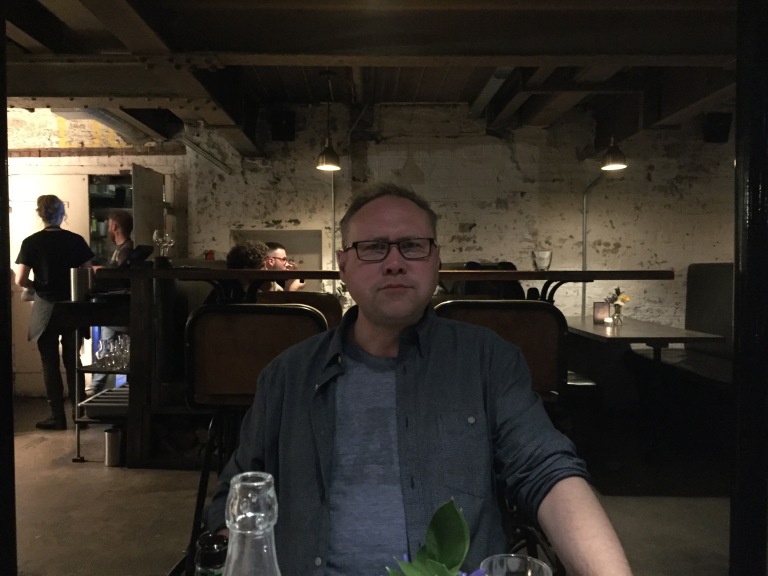 In years past celebrating a birthday was always a joyous occasion. This year I feel a bit subdued. Circumstances are such that my girlfriend is on a different continent along with my family and with all the things happening in the world the celebrating seems to me a bit out of place. I’ve slowed down on my alcohol consumption and I know that the recovery will be tougher. Having said that I’m going to have as good a time as I can. I appreciate the effort in setting all of this up.

Bernie used to live in Manchester and the City has changed in the time since he left. The Northern Quarter was a derelict area that was frightening to walk through at night. There days it is filled with hip trendy bars and pubs. On a Friday and Saturday night many people descend on this area to party and have a good time. We were two to add to the mix.

We wanted to get some food before we started to have a few. Since I visit this area with M on a monthly basis over the past months I was able to direct us to a place. It is one of those restaurant downstairs and a pub upstairs kind of places. The old floors and brickwork now supported by new steel beams and all the other attachments exposed in the modern sensibility that is in vogue. The huge pizza oven was visible from the entrance in an otherwise sparsely populated restaurant.

“Do you have a reservation?”

We didn’t but looking around it would appear that there should be space to fit the two of us somewhere.

Bernie and I looked at each other with a puzzled look and a suppressed laugh. There was some ruffle-duffle, five minutes it lasted. After busily checking his list the waiter returned and sat us down along one of the walls. The menu was sparse but had enough choices to satisfy what we needed. It was a pizza kind of night. It was proper pizza.

We followed up the pizza by going to a few more pubs and having a few more pints. The last place that we went to had a huge open space outside of it. Inside however the place needed some work. Judging from the location it is unlikely that any work will be happening to the current incarnation. We were both tired both from work and from the drive itself. There is no need to go all out as my birthday is on the Saturday. 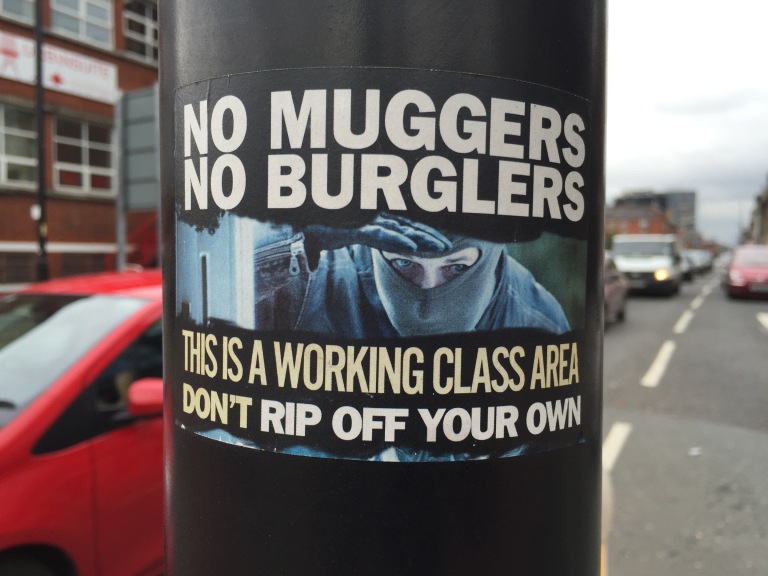 Waking up early in the morning it looked miserable outside. Sometime in the morning the rain began to fall. Misty moisture fell and moved in many directions carpeting everything with droplets of water. I can’t sleep in so I got up and decided to go and get a coffee from a cafe. It turned into a trek in the early morning. 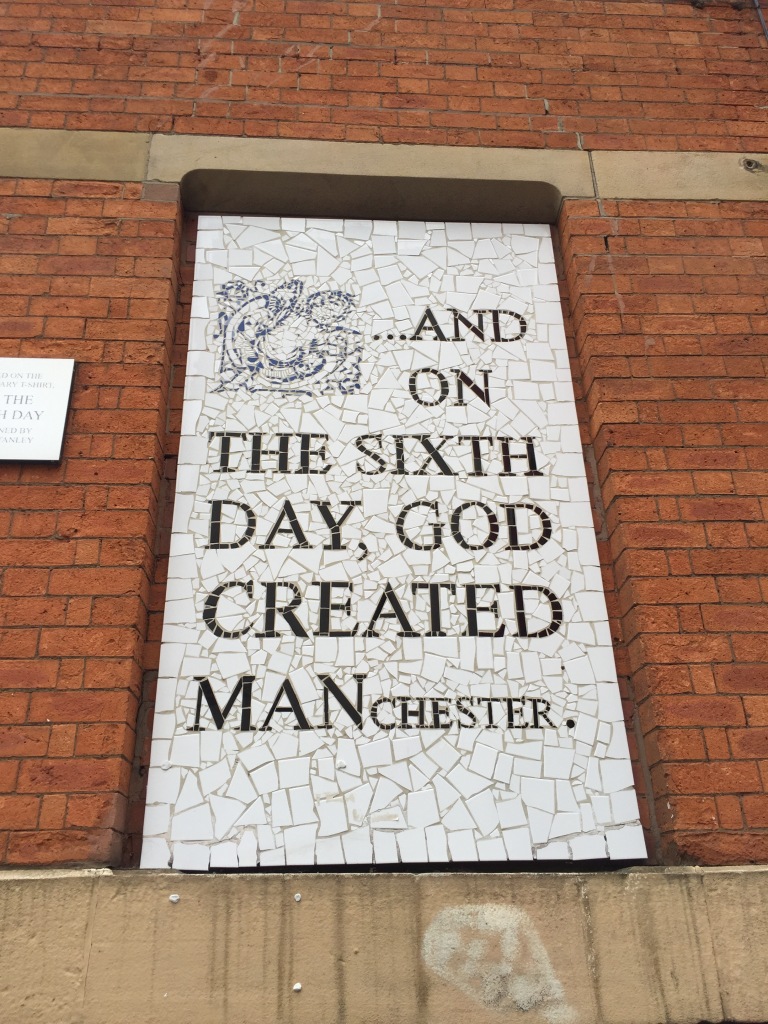 The morning is a transition time between those still up and those just getting up. Bleary eyed couples were slouched together for support conquests not yet materialized. Coffee in hand I made my way back through the gritty streets of the Northern Quarter back to the flat. There were a few things to finish up before we headed out for breakfast. 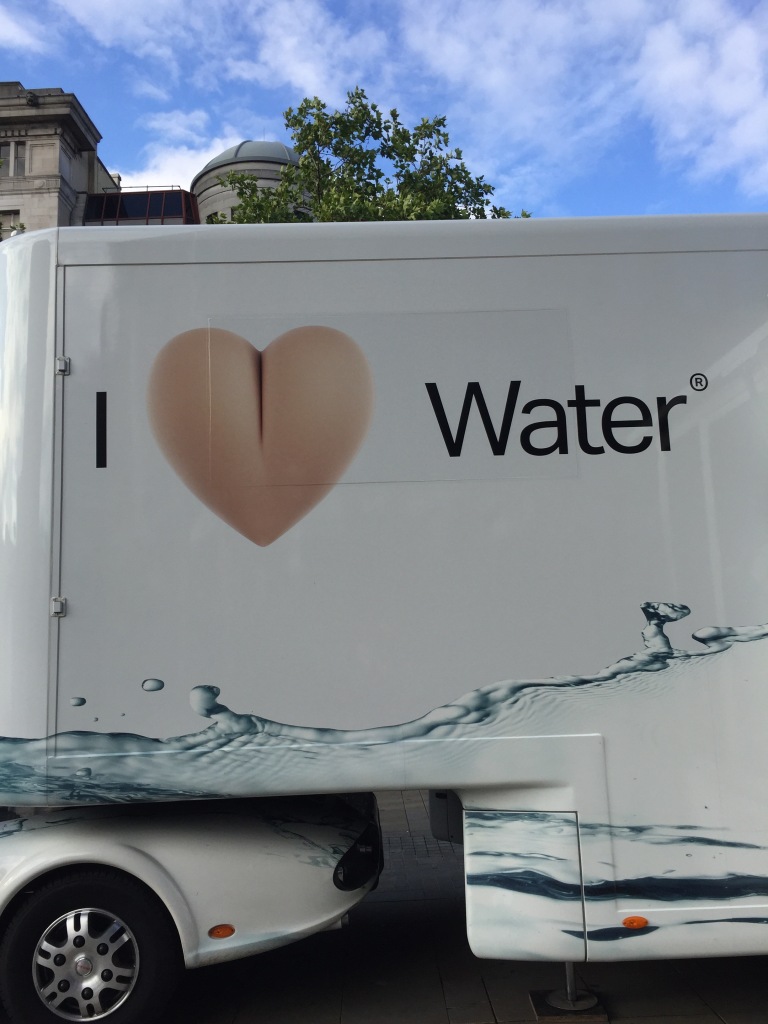 “Happy Birthday!” Messages started rolling in almost as soon as I woke up. There were some who called and some whose calls I missed.  It’s always nice to get these. We each have a birthday and that day serves as a waypoint on our journeys marking the end of one yearly cycle that is added to the ones that have passed before. The first place we came upon for breakfast had an hour wait. We decided to move on to the next. 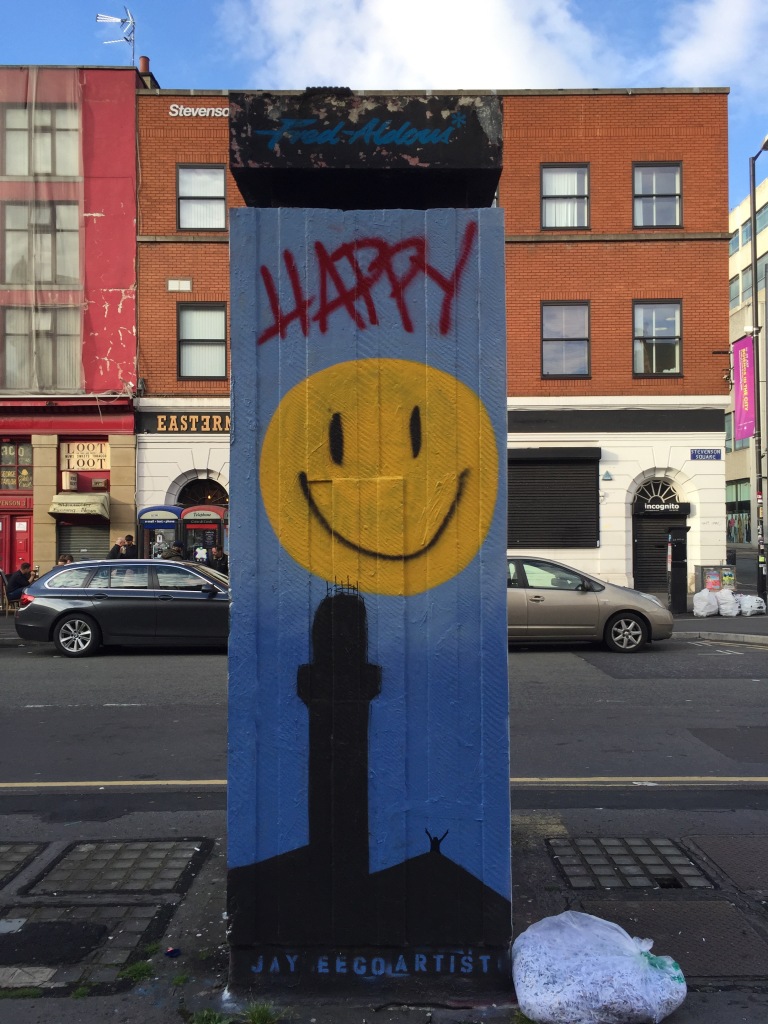 The second place had seats available and we promptly sat down and ordered our meal. The fancy eggs Benedict was actually quite tasty. Just enough food for us to carry over to the next meal that will happen later. We needed to do some shopping as Bernie needed some trousers and I wanted to get a shirt and maybe some shoes. The ones that I have have their soles worn out. They had my favorite shoe store inside the mall. As well as a polish shop where I got some sausage. We found everything that we wanted to find trousers, shirts and shoes. 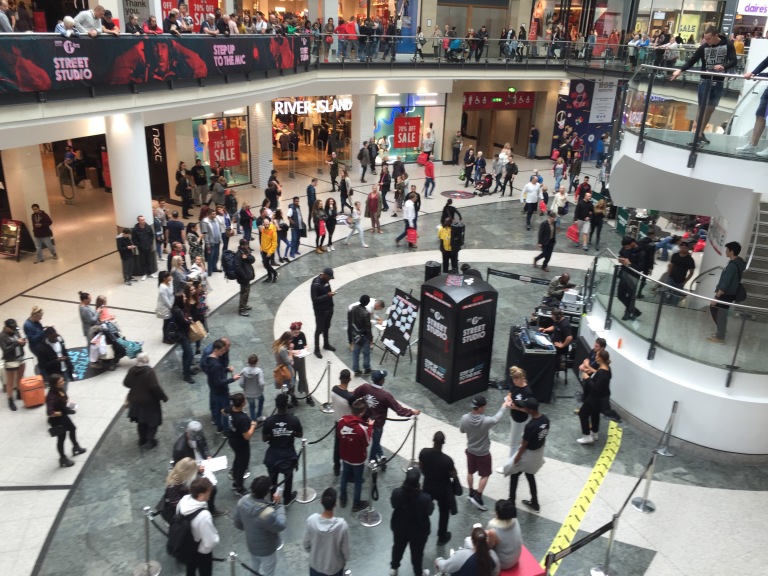 The best present has been hanging out with Bernie. We had been planning a weekend out together for a while but with the schedules the way they are it’s been difficult. We have a mutual respect for one another, in other words a friendship,  that extends to inspiring each other artistically even if it is subconscious. Part of this blog running for so long is thanks to Bernie. As we age and mature into adults the time we have to pursue our individual projects decreases as responsibilities increase in other areas of life. This was a chance for us lads to hang out its been a long time and it’ll be a long time before it happens again.

First there was Nice, then the coup in Turkey and then in the final day a few more cops shot and killed in the States. These things kept popping in and out of our conversations. The way it all played out on the news was interesting and informative. There is symbolism in there somewhere. Ways in which not to do things. The world is a much different place now that cameras are all over and what is happening is beamed almost instantly. The coup was over by the time I woke up on Saturday.

We mooched about and then made it back in time for me to sit down and chat with my significant others. Parents and Ba(r)be, brother, sister, and sis-in-law. I kept trying to keep up with messages and then it came time to get ready to go out again. By this time the weather outside changed. It changed for the better with the sun shining. Bernie says I’m lucky with how the weather cooperates for me. It did at Stonehenge and it’s doing it here. We laughed about that. 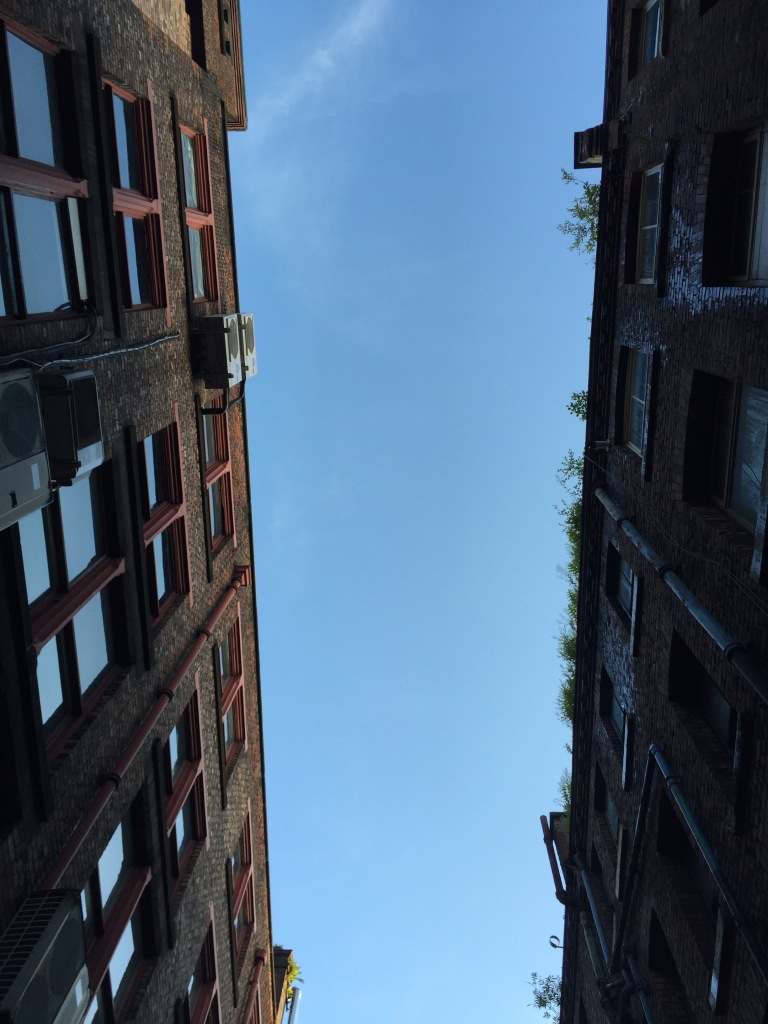 We had a proper meal of gourmet burgers. A good base for what’s ahead. Pints were flowing well and we were joined by M who joined us for a while. We hit up quite a few places. There are all kinds of different places here in the Northern Quarter. All of them collectively transforming this area into a trendy hub of culture. The type of culture that invests money and energy into a run down part of a city and transforms it into a cool hub to congregate in. 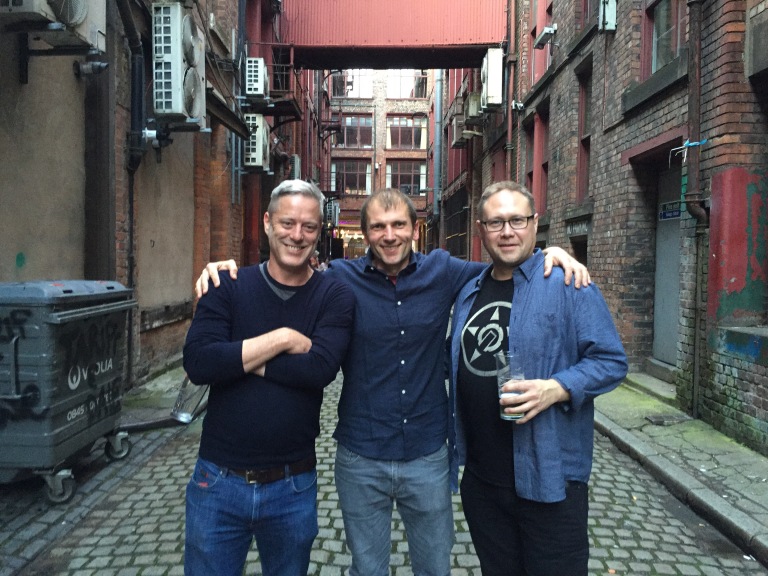 Bernie is being forced to consider the move back north again. The Northern Quarter is not what is going to bring him back. The troubles and issues that plague this region are what oppose this move. As much as things have changed much of it remains the same.

We had a good time all of us. Drinking until I had trouble focusing. It’s been a while since I drank so much. It may be that I am getting older but I refuse to believe that. It’s really due to the fact that I’m changing and the enzymes that populated my liver are no longer there having long ago been discarded. What I consider a good time isn’t at the bottom of a glass it’s with the company that I keep.

There were plenty of people out but we kept to ourselves. Many of my friends who have reached this age milestone have gone all out but on this night I didn’t. I’m waiting for my holls to really celebrate when I’ll be reunited with Ba(r)be. It was really nice to mark the ocasion with a good friend though. Culturally we look at the number and think that someone should be at a certain point in their lives. I’ve never believed that entirely as life is never just a straight road if you have a wandering soul.