This thing that is always carried around and always by my side. It’s more powerful than the computers of yesteryear and oh so convenient. We call it a smartphone or just a phone. We use it everyday for communication and information gathering. Not to mention entertainment although I just did mention that didn’t I? Well in all this time I’ve wondered about using it to organize me life. During this time that I’m away from home and have some idle time I could use this time toward something productive. Something that is informative and educational.

On Sunday feeling a bit tired from my excursion the day progressed at a leisurely pace. At this point manually tracking my diet still held some appeal. I diligently drew lines in me notebook hoping to have enough for the past few days that I’ve been missing out on. This process took a while and the thought came that doing this was taking up a bit too much time. I could feel the soreness from being hunched over as I made sure that the lines were precise. It was off to a coffee shop for a while to sit and fill in these spaces that I made. There was a bit of research to be made like what is the nutritional content of a latte or that sandwich that I had yesterday from that shop in the station. How do I find that out? I found their website and their menu but the nutritional content is nowhere to be found. Then I googled it and voilá there it is! The info is courtesy of a nutritional app. I’ve seen it before but didn’t want to commit to it just yet. There was some benefit to doing everything manually right? Further cost benefit analysis revealed that the time spent researching and entering everything into the notebook and then transcribing it into excell would take away from my precious time. Time that could be spent doing other activities of equal or greater benefit.

By this point I ventured further as I wanted to find the polish shop in the area. It wasn’t what I expected but still it had some things that I could try out to see how I like them. Next it was a trip to a super shop that I haven’t been to yet but whose brand I enjoy. I bought my provisions and went home to cook and prepare for my video conversations. There was time before the Pacific time zone would wake giving me time to install the app that gave me the sandwich nutritional content earlier. Toying around with it I entered the content of my breakfast as well as all the other things consumed thus far. This is way easier than writing it all by hand. I can even search by barcode and the database finds the correct item for me. The blurb that the app has states that they have over four million items stored in it. More get added every day I’m sure. I wonder if I’ll ever stump it.

We had a good long chat. Using the cellular network to communicate sure makes a difference. We could see the creases and spots on each other’s skin and acknowledge the micro expressions that the subconscious expresses externally. Barbs is gearing up for a performance that she is taking a part of. It will run all week and is sold out! At least I had a chance to see a reading of it it’s too bad that I’ll miss the actual performance of it.

We have learned a lot about each other over the course of these conversations. We can’t be distracted by each other’s presence. We focus on just our words and the stories they convey. One has to take the good with the bad and this is reciprocated so that we acknowledge the past and build upon it for a stable foundation looking toward the future.

The future… That was a theme when I spoke with my folks. Their belief and their wishes were pronounced and I wonder how I’ll deal with the circumstances they have sought. It’s hard to compromise with them with certain matters. At some point there will come a time when our differing views will once again plunge our relationship to strain. There is a generational divide between us and our outlook on life. Theirs is a world of faith to one set of beliefs and mine to another. They question weather or not I am right but to them their ways and traditions are tested by time and have become a dogma and a mantra all at the same time.

Can there be a reconciliation between the two? It is not unlike the stigmas and the prejudices that people fight against. Not to mention the inequalities and injustices faced by huge swaths of the earth’s population. There is the generational wealth and opportunity gap. Racial divisions still haven’t been sorted and in fact they are becoming worse. There is a fight for global dominance by the superpowers a jockeying for position and with constant undermining of each other’s standing. So much for working together.

With the success of my foray into nutritional tracking the same strategy will be employed to my finances. This will be slightly different however. The complexity of my finances warrants a slightly different approach. What is important in any of these forays is simplicity and ease of use. The app that I settled on requires me to adjust to the system that formed it. It’s not just a simple data entry app but it has an element of fun to it.

It seems like this piece of technology is always in my hands. So many aspects of my life are tied to it. From communication to expression to organization and the various levels of analysis that I employ to sort things out with. This particular phone has been with me throughout my journey and 99% of this blog has been written on it. As I travel to my destinations or sit quietly in the corner of a cafe it is there. When something is happening around me that needs to be recorded it is there.

When I was in Liverpool getting my upgrades and dongle the sales guy and I chatted about the implications on the younger generation. We lamented the fact that kids appear not to be able to talk to each other. They sit next to each other texting messages to each other and not talking. These are of course anecdotes plucked specifically to illustrate a point. We worry about that but that is just a distraction to the greater issues of our time. These technological tools also serve to inspire us to do more. Well at least some of us anyway. 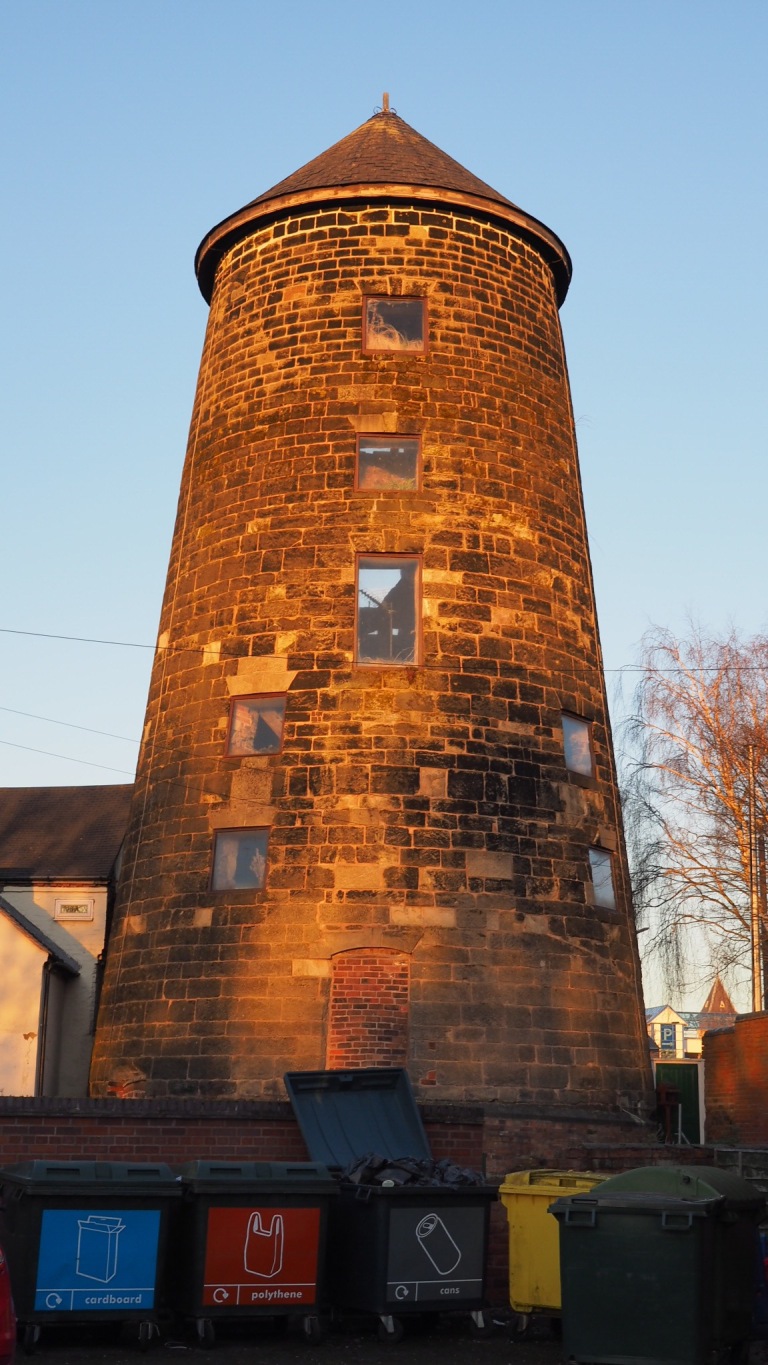 Feelings that we had when we were together remind me of my purpose here. This has become muddled a bit as the question “how is long distance love treatin’ ya?” is asked. Communication is important so that those feelings will be there and probably stronger when we are back together again. Such is the life of being apart physically with thoughts always partially somewhere else.

Monday mornings…. roll out of bed and head into work. Be there at the station at such and such time get into an available seat and enjoy the ride. Coffee tastes good and with everything neatly packed in my rucksack I typed away the Liverpool story. The train stopped and while this is not uncommon the announcement that the trian will be bypassing my stop is. Damn it! The train from Crewe won’t leave until almost eight 😐. I’m going to be late for work. The journey took two hours! Once at work there was a bit of chaos first thing in the morning as there was some compliance testing as well as late running deliveries of our radiopharmecuticals. By the end of the day it was all sorted however. 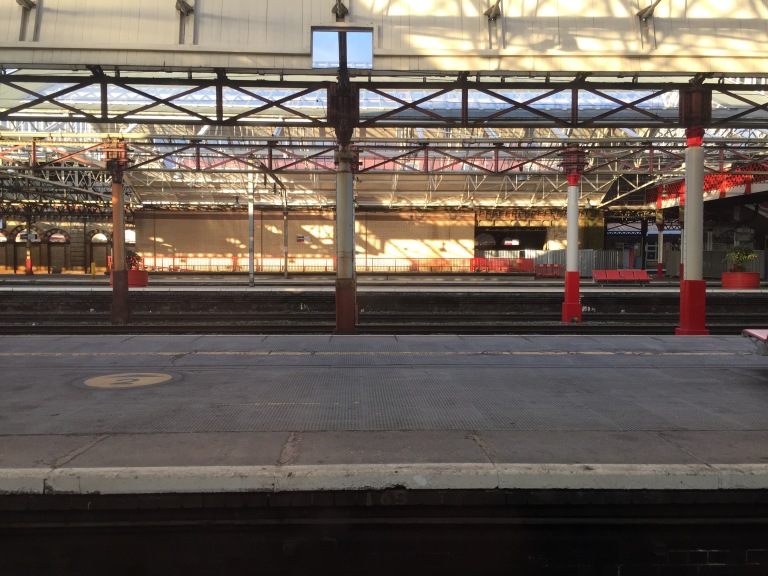 Today, Tuesday it was a late start so I lived dangerously and never set me alarm. It was the body’s processing and an urgency that made me get up finally. There was this hopefulness that I’d get more things done but it turned out that I did the same amount only slower and in a slightly different order. Again once I was at work there was a delay to the start of the day but that gave me an opportunity to showcase my cannulation skills to me boss. It’s been a few months but the skill is akin to riding a bicycle and the rust washes off quickly.

Towards the end of the day the early effort paid off and I left a half hour early. This allowed me to catch a train at a decent time and get back to the flat earlier than expected. Looking at the train schedule I saved myself over an hour of idle waiting time. These projects that I am still pursuing have reminded me of the lesson about time and how important it is. I am fighting to balance my desires with the reality of my situation as best as I can.