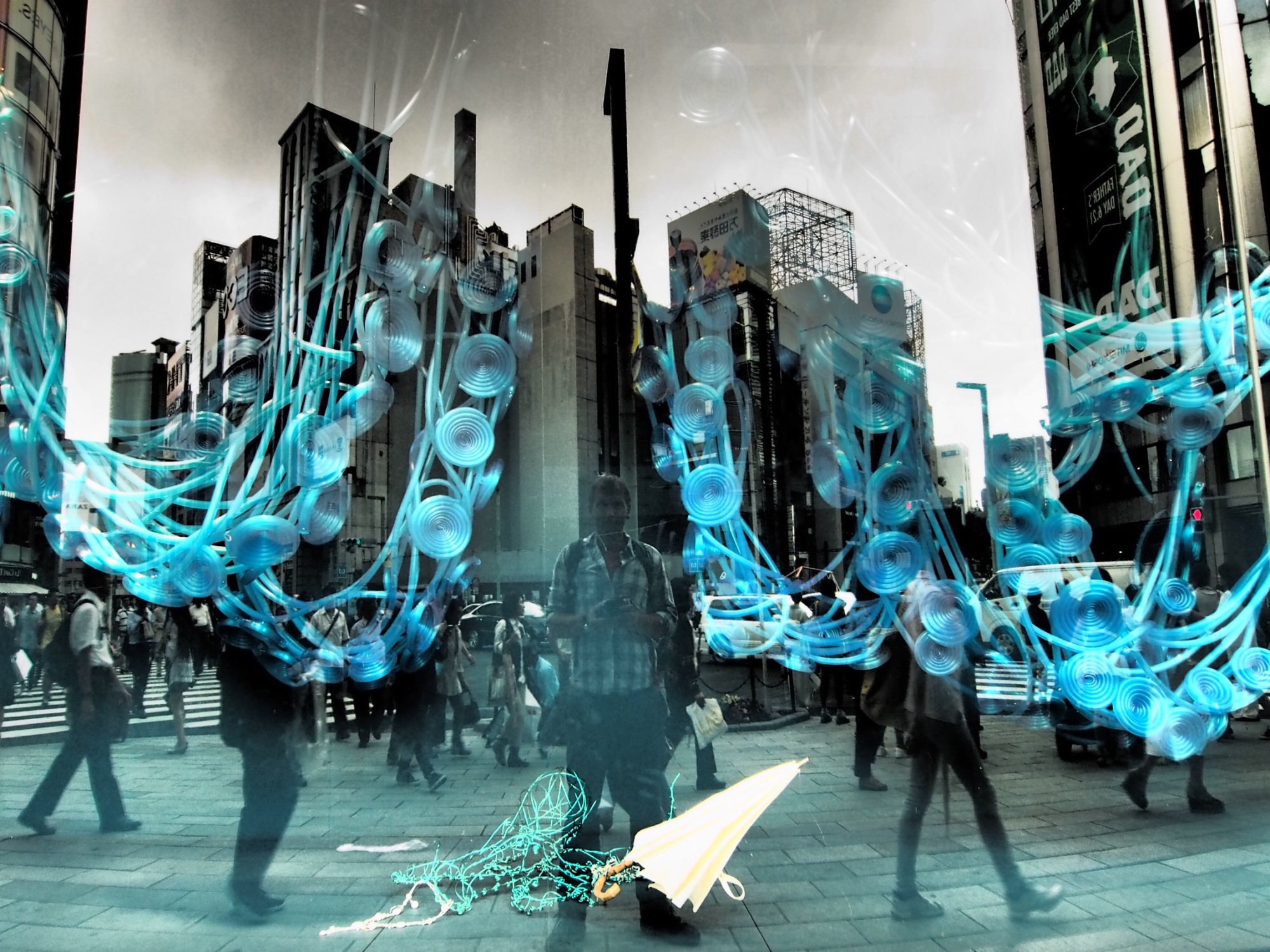 Sitting here in the coffee shop thinking about what to say about my day yesterday. It was a day on which I decided to explore the city srtreets and some of the neighborhoods that are prominent in the tour guides. There was some energy stirred within me that needed an outlet. 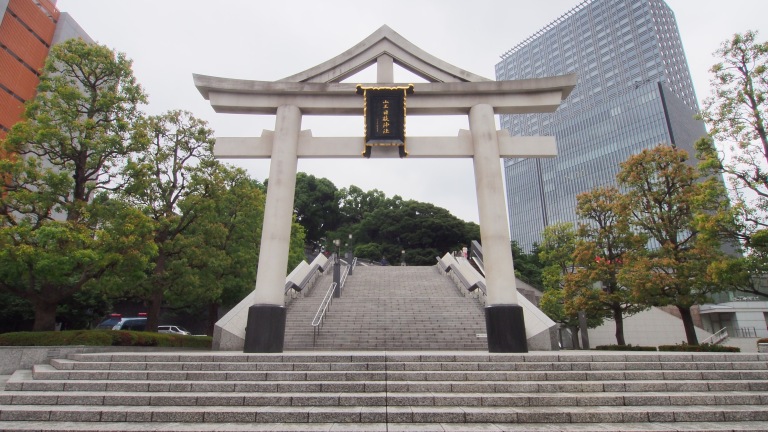 Tokyo is a big city an amalgamation of some twenty-three prefectures along with some outlying islands and a bit of the surrounding area. The city swells each day as people living in outlying areas travel into it for work and pleasure. It’s not unlike London in this respect. 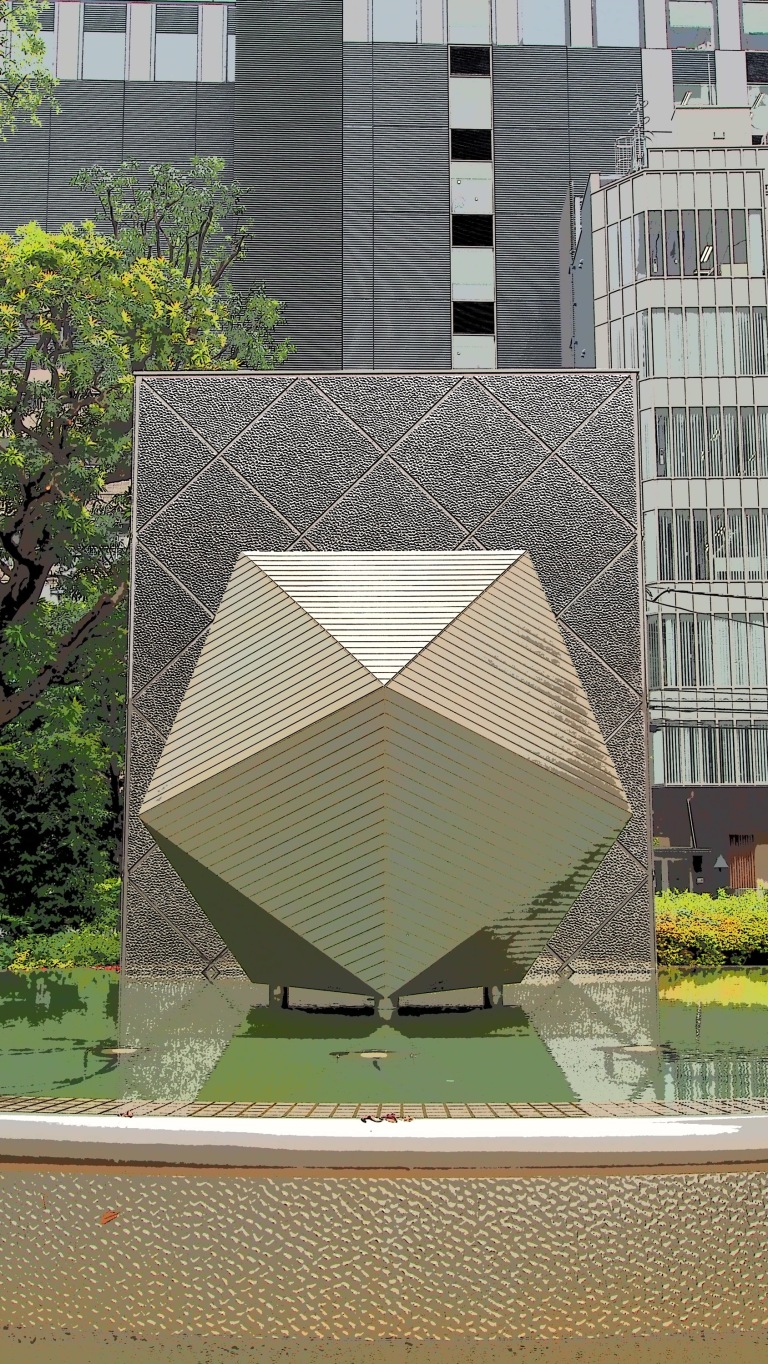 My ‘hood that I’m staying in is called Akasaka. It lies close to Ginza an area renowned for its food and shopping. That was the first destination. Walking along one can’t help to be looking at all the things all around. Thinking about it now I don’t think I had anything in particular going through my head. Just a focus on heading in the right direction. 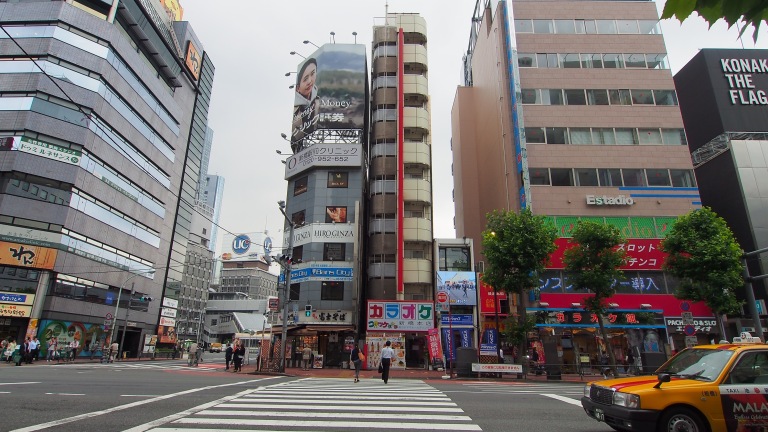 Ginza is every bit the shopping district that it’s made out to be. There are numerous little streets as well as large boulevards filled with shops and boutiques selling all kinds of fashions and accessories. It’s kind of bewildering to walk around in. The usual suspects are there. Those luxury brands that everyone covets as if they were exclusive and unique but the only thing that makes them so is the barrier put up by their price. 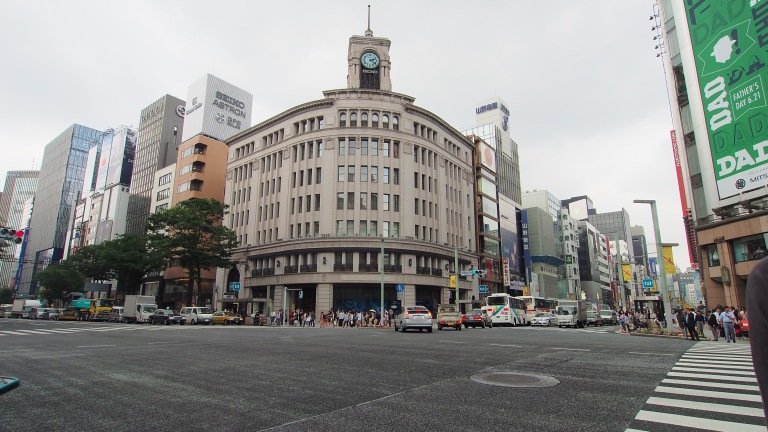 Moving on through this district I went by Tokyo Station but this time from the financial district side. The tall blocks of buildings square and imposing look the part of the suit and tie men that inhabit them. There is some flair and variation here and there but their imposing height and size speak to the power that is wielded here. I kept walking in a zig-zag line spotting a place to take a shot or something worth examining more catching my eye. 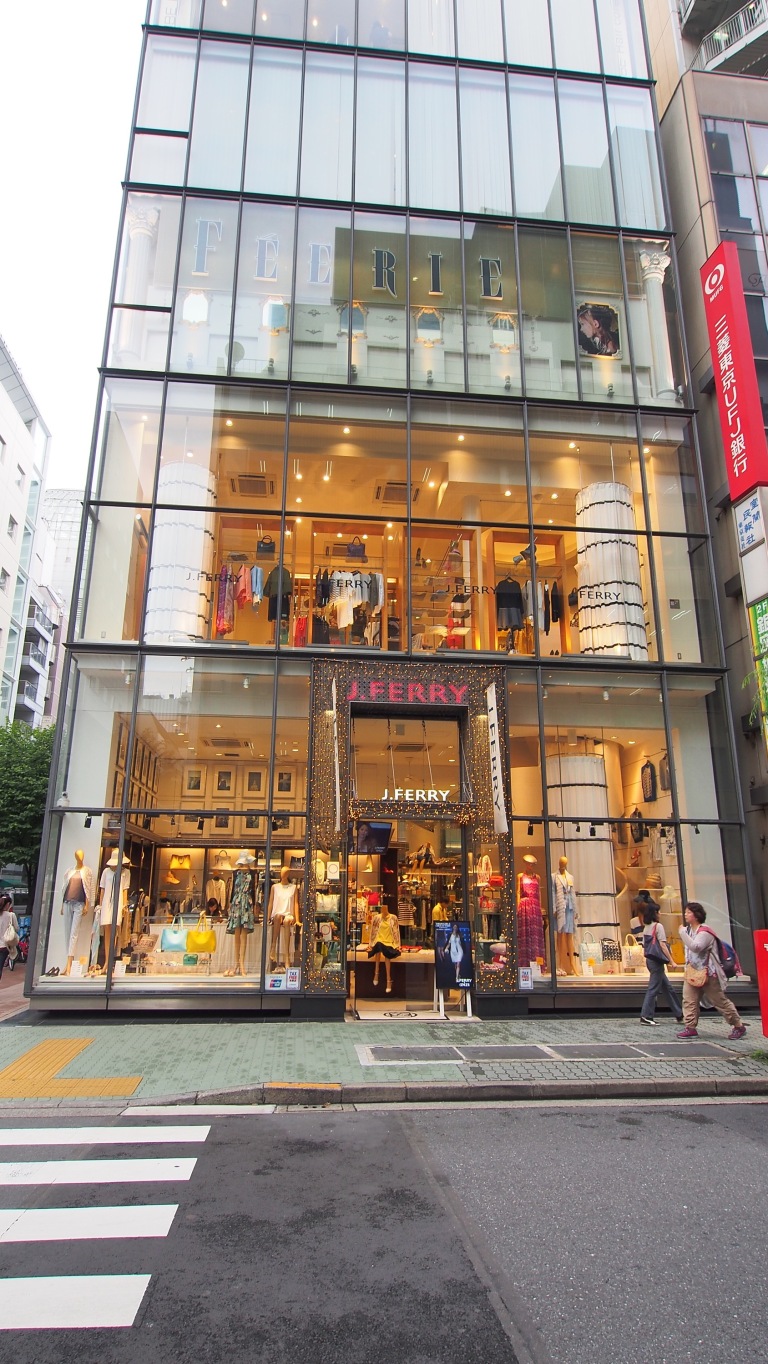 Taking breaks in coffee shops that were not name brand but more comfortable with their wood paneled walls and jazz softly playing in the background. These are little oases for those who enjoy a bit of fresh air as they talk about their day. These activities are not allowed when walking down the street but only in designated spots where all those congregate. These breaks allowed me to read up more about the places I’d be visiting along this walk. 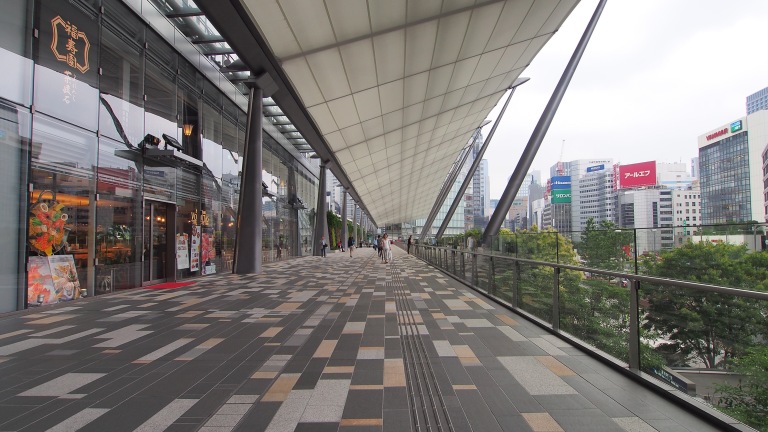 Somehow zig-zagging along I ended up by Ochanomizu station and liked the flavor of the area there. It was time to eat and I found a little place to get some food. It’s amazing how little space is needed for a restaurant. There is no waitress just a vending machine where you purchase your ticket from and then give it to the lady behind the counter who then prepares it with the cook. The portion was nice and when you’re done you give the tray back to them and make space for the next person to eat. It’s like a fast food joint in that respect and there are many of these all over the place. Here in Tokyo it is proper etiquette to clean up after yourself. If you have a cup of coffee or anything else you put your remains in the space provided. There is someone who comes around to wipe the tables but they are not there to pick up and clean up everyone’s mess all the time. I just have a picture of people too lazy to throw away their cup and just leaving it there as they go. 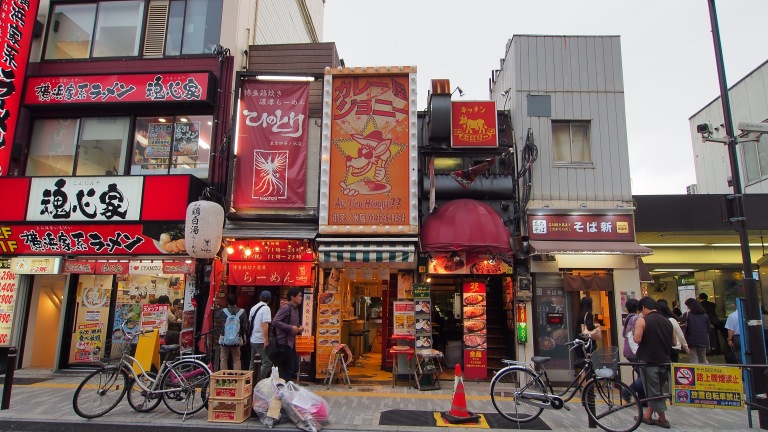 Akihabara station was close and in that area is a large concentration of Anime places. The area was packed with people who now we’re leaving work and going out to play. I was amazed by the sights and sounds there. Women were dressed in those little outfits handing out flyers to go to visit their establishment. It’s all role playing and have your picture taken with them there. I guess one has to be into that whole genre to really understand the costumes and culture on display. Sadly I am not one of those people. I may have an idea of who and what these characters are and maybe I understand the appeal of escaping into these roles. To escape the reality of this imperfect world as organized and designed as it may be into a world even more idealized. The one thing that does strike me though is that these characters are all cute. Cute in the sense that the phenomenon portrays an impossible feminine ideal with an innocence on the exterior. It may hide the inner darkness that is not exposed but hidden in those rooms up on the upper floors at a high rate per hour for your eyes only. It may be why I find bits of the culture with respect to men and women kind of strange. 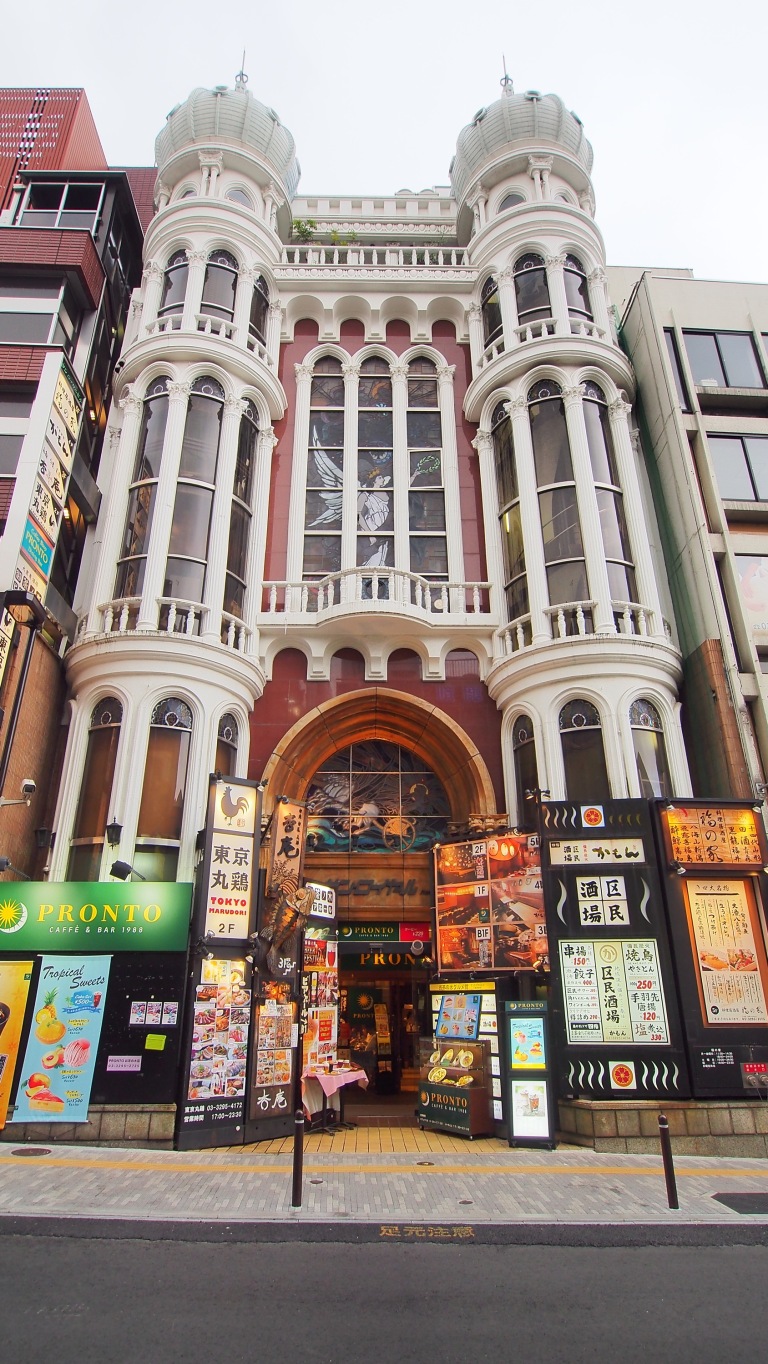 What a trip though. Walking along there was one of these girls signing autographs and displaying herself. I couldn’t believe the crowd of men gathered around snapping away. I joined in to examine later what the fuss was about. Is this where our western society is headed or are we already there? It’s one thing to desire esthetic beauty but at the same time are we forgetting something else that’s more important? To me it seems like western women are a bit more empowered. There is a bit more ease to communicate and interact. I find that if I make eye contact their eyes here quickly look away never to return their gaze. 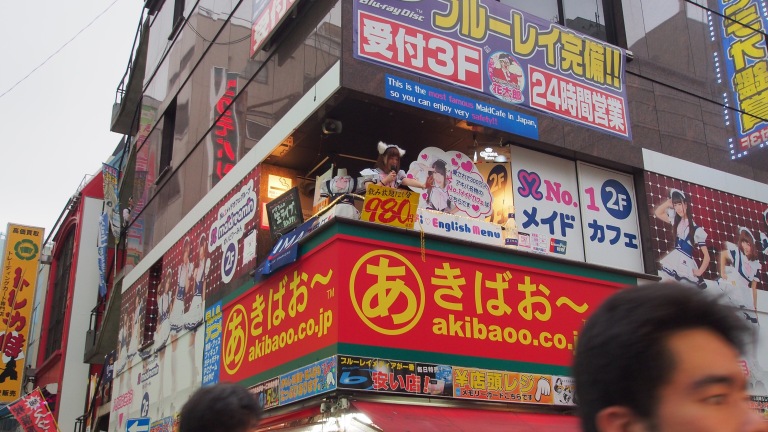 Eventually I made it to an area under the tracks that sold handicraft stuff. It’s called 2k540 and it is in the Ueno area. It is elegant and quiet in there. All the stores there are independent operators selling their wares. They had their little machines there on display. There were a lot of wood and leather products along with an assortment of jewelry and clothing stores. I’m interested in this as it is the means by which new industries will form. Big conglomerates and major brands have come to dominate our culture and choices. In a way they are good as they for the most part try to have a standard but in other ways with their dominance they have eliminated uniqueness from our lives. We feel like individuals but express it with the same fashion and the same look. These big brands are found in every country I’ve been to so far on my trip. 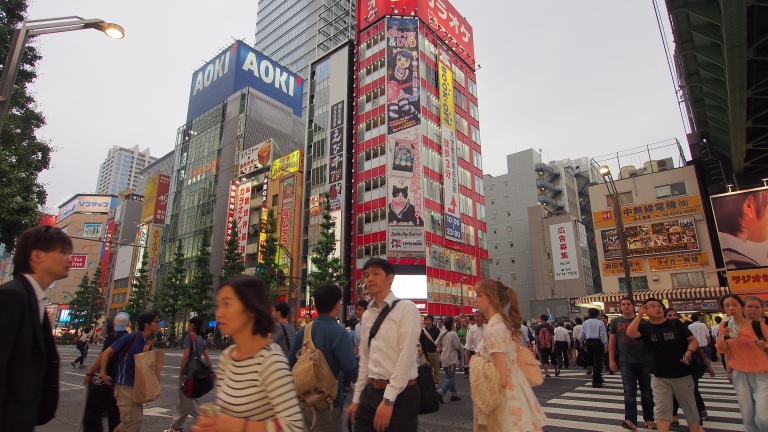 The last destination on my trip today was the Skytree. This is a new tower that was built to replace Tokyo Tower in order to broadcast television signals. It is over six hundred meters tall and is now the second tallest structure on the planet. The clouds were low and rain was immanent so I never paid the price to go up there to see the lights of the city from above. I did however stop and take some pictures by the riverside with it in the background. 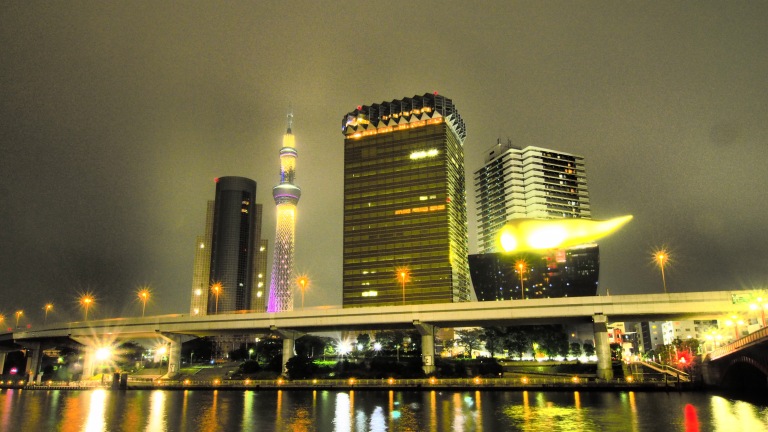 It was late now and fortunately it was easy to get back to the hotel. When I got out the rain was falling and people were rushing to get somewhere else with their umbrellas out. I got myself a drink at a local pub if I could call it that. I watched the spectacle unfold before me. The place was crowded and the waitress was having trouble keeping up. It was a nice way to end the day even though there wasn’t anyone to try to engage in a conversation with. Not worried though people will come along…