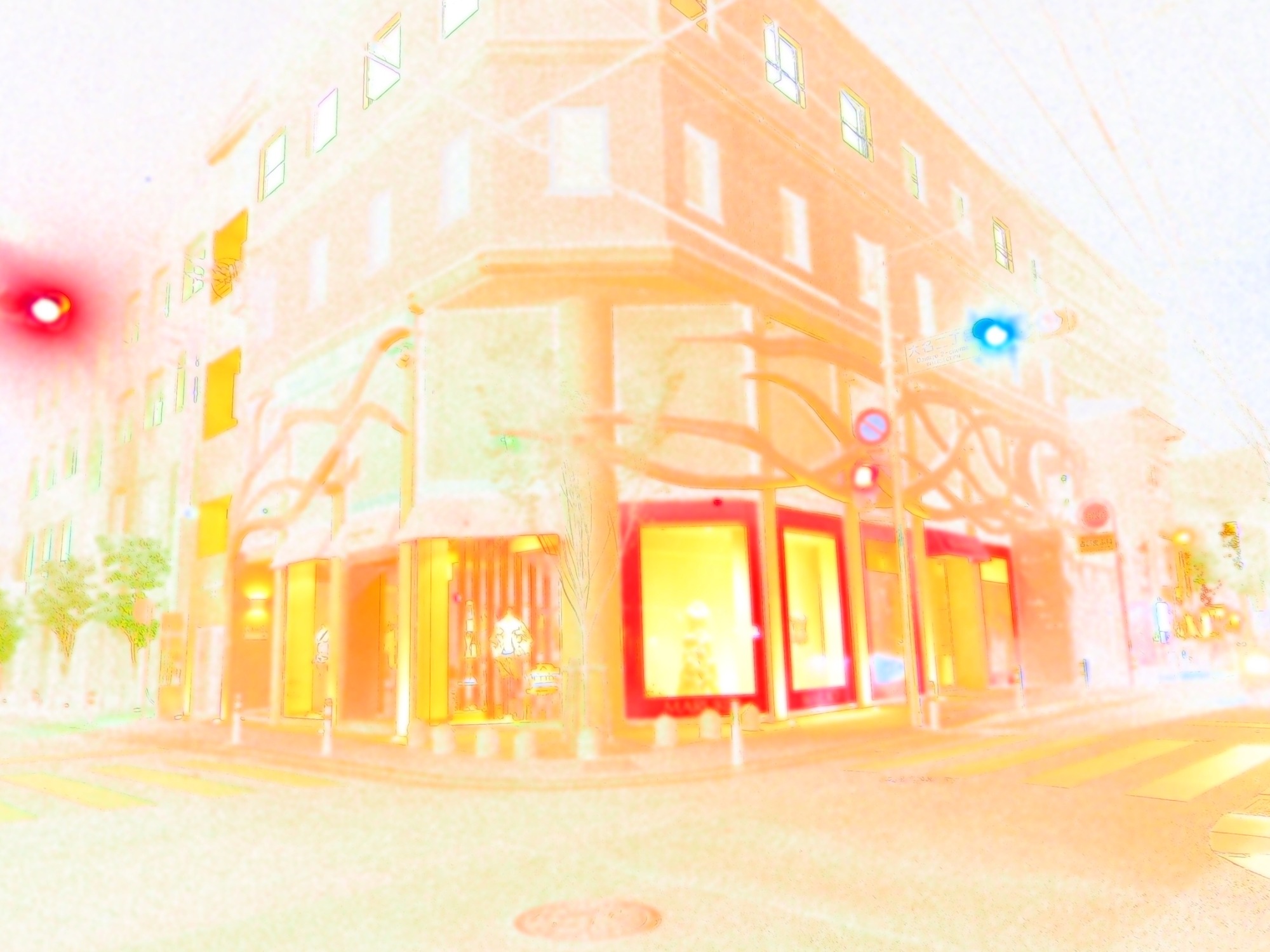 The last leg of my journey begins. I landed in Fukuoka and enjoyed a leisurely evening as I adjusted to the new culture around me. What a wonderful place. This city isn’t as famous as many others in the country but there is something about being here that I can’t quite put my finger on.

It could be that the architecture and the people that I’ve encountered so far have made it wonderful. Walking the narrow streets with sharply dressed youth and old alike going about their business. The neat little restaurants that make it hard to decide which one to enter. There is a draw to Japan that motivated me to come here and over the next couple of weeks I’ll hopefully figure it all out.

The day however started in Seoul. I woke up later than I wanted. My ingrained sleeping pattern has slowly began to be worn down and my late nights in the city and the packing have finally won out. I set the alarm but why bother. I had a delicious coffee and wrote as well as figuring out how to get to the airport. One thing about Seoul’s airport is that it’s far outside the city. The express train takes 45 minutes but it only runs a couple of times an hour. When I finally got to the station to take it that luxury was gone. Fortunately there is another that takes an hour at half the price. The journey felt longer than the actual time that elapsed. I was squished between people the whole way and at one point one of the old men that sat beside me has a problem with flatulence. The smell kept wafting periodically through my nostrils. I was trying to read the facial expressions of those around me but I couldn’t get anything. Their faces were stoic. Other people’s gasses are harder to tolerate than your own. 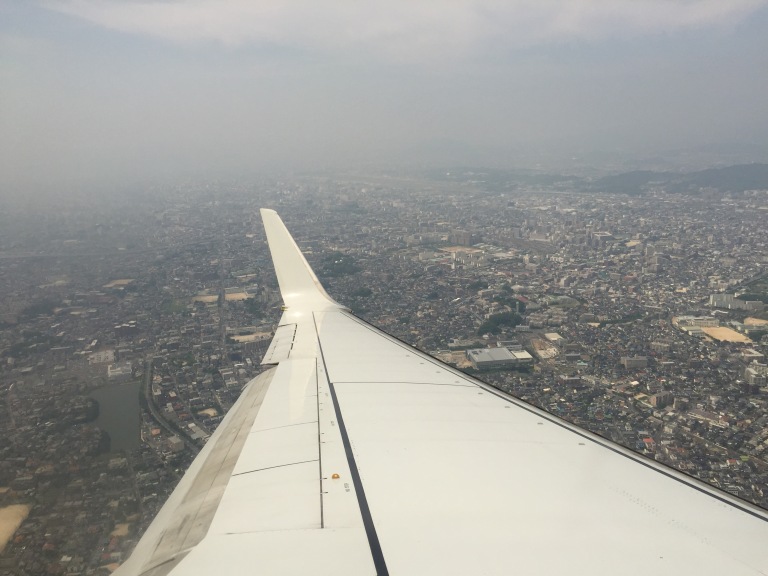 I had just under ninety minuites to check in and make it through immigration and to the flight. Lots of time I thought but here is where I was wrong. First after checking in the receptionist called me back. They wanted to inspect my bag. I couldn’t understand what she was asking me and I unwrapped the entire contents of my checked luggage. She apologized. She was asking me about a can that I had. The next part was security and immigration. The lineup wasn’t too bad and with the added travel time on the train to the right terminal I made it to the gate with fifteen minutes to spare. There was little time to relax before the journey. I had just enough to have a quick snack and update my status.

The flight itself was quick and good thing too as my legs were wedged into the seat in front of me. A couple of taller Koreans sat next to me so I was properly wedged by the window. A quick nap and a glass of water later and we were landing. I didn’t even have time to compose anything.  We were bussed from the plane to the terminal and as I approached the immigration I figured I should do a pit stop. Good call on my part as the lineup snaked in front of passport control. I was handed a piece of paper to give the inspector when I got there. They were auditing line up wait times. There was a group of suits standing off to the side talking about the process in front of them. They moved to the office to observe from a more secluded location. I let the a Korean lady butt in front of me so that she could join her friends. They had to do a pit stop at some point in the line up. Old folk were rushed to the front as one gentleman looked like he was going to keel over. The flight literally took less time. Once I got to the counter I realize why it took so long. The forms and the fingerprinting mechanism was slow. In other countries most notably Singapore and Korea these systems were quick. Many had to do their prints over again as the machines struggled to read the prints themselves. A camera that was built into the machine took a while to focus and photograph. I think my frustration was evident in the photo they got. 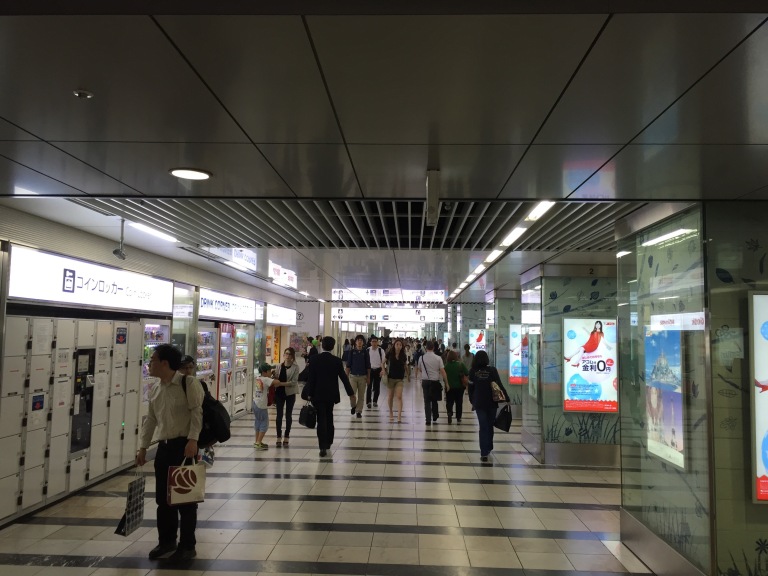 My processing didn’t end there as I picked up my bag and gave the guy my customs form I was asked to have my bags inspected again. I’ve resigned to the intrusion and my progress and happily complied with the request. Once I opened my bag and proceeded to show what I have inside the inspector relented and told me to pack it up and apologized for the inconvenience. I gave him one of those looks an bowed in return as I left the controlled zone. I needed to get my bearings, something to drink and find an ATM.

I liked the kikiyama statues or floats that were housed in the lobby of the airport. These things weigh over a ton each and are paraded through the city on July 15th in a ceremony that has happened every year for the past seven hundred and sixty years! It is one of the oldest enduring traditions in Japan. It is also exclusively done here in Fukuoka. I took a bus to the train station unnecessarily in retrospect. It was driven by a white gloved driver who announced the stations in a sultry Barry White voice. It added to my fascination with the sights around me. 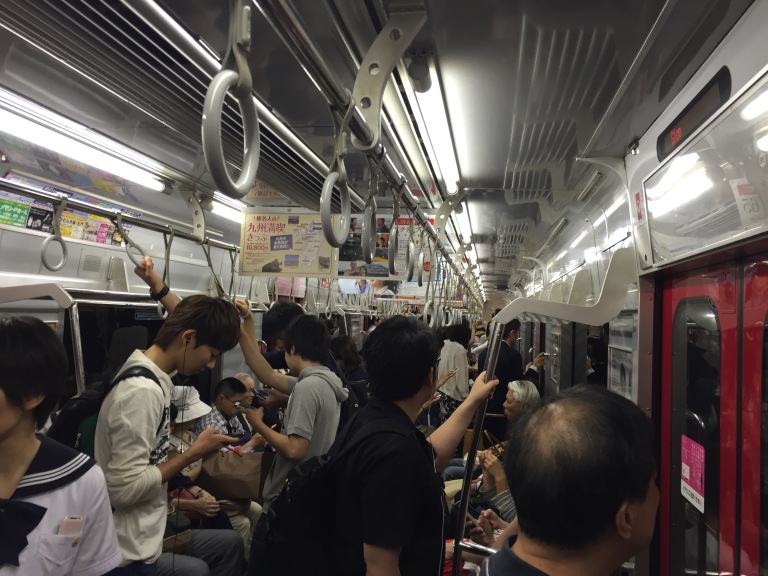 There was no rush to get to the hotel. It’s not that far from the airport and I knew I would get there soon enough. I kept hopping on a wifi network that is provided by the city free of charge starting at the airport and continuing on in all the stations. It’s quite handy for a traveller like me. The station I got to was huge. It serves as an intercity rail station that I will leave the city from as well as a metro station. Makes sense but there is also a multitude of shops there as well and a huge number of people. I have to go there today and sort out my journey to my next destination.

Once I navigated the few stops and found my hotel I felt a bit weary from the journey. I decided to sort my stuff as I searched for my rail pass. There are things tucked away here and there and it’s good to collect them all into a cohesive whole. It makes packing easier and I will have to repeat this process a few more times yet. I ended up puttering around in the room showering and relaxing watching some program. I noticed they sell placenta extract to use as facial cream. It seemed to work wonders on those who used it 😉. 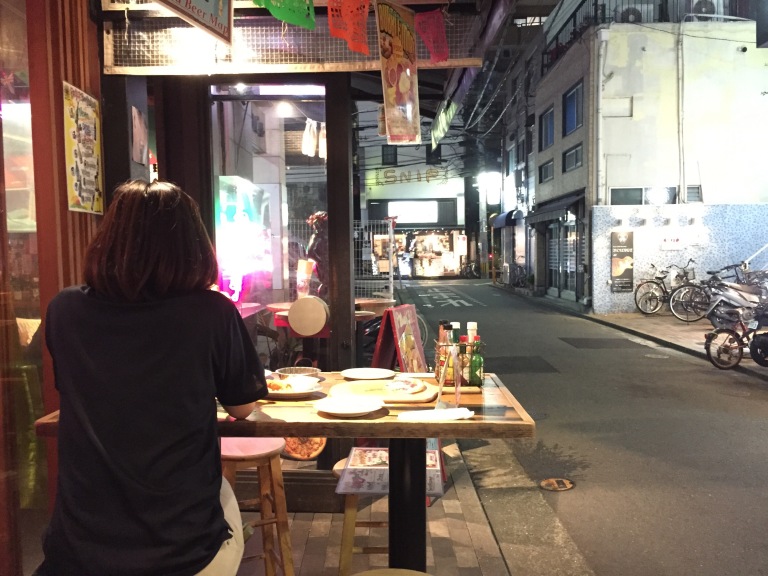 Hunger finally drove me to leave the room and explore the city around me. I kind of walked aimlessly for a while trying to search out some place to eat. There are plenty to chose from but which one. It’s hard to make a decision on an empty stomach. Out of all the places I could have picked I chose a little bar that had seats outside and ordered a pizza from the menu as well as some shrimp with vegetables in hot oil. I chose this place because of the location and atmosphere it exuded and it was also on the ground floor. A lot of the restaurants I saw were on upper floors. One of the staff there spoke some English that he learned while studying in Toronto. We had a couple of chats.

There is a big food culture here and the trend is towards western food especially Spanish and Mexican. The pizza was served with an assortment of hot sauces that I tried. I went through most of them trying to decide which one was the hottest. I had a couple of expensive beers depending on which currency I exchange into. Either way there is a premium on par with the “expensive” parts of the world.

I walked around the city some more afterwards looking for a place to happen. There was a Spanish wine festival happening but I got there just as it was closing. Then walking down some arcade taking photos of some statues I was approached by this older couple who started a conversation with me. They ended up inviting me over to their house for dinner tomorrow/today. It would be rude to say no and it will be interesting. She said that she will cook an authentic Japanese dinner. Kind of looking forward to this now as I think about it.

I kept going exploring the parts around me finding little spots that I should get to later. It feels very peaceful here even though this is a big city it feels kind of like a small town. The area I’m in is designer and chic based on how the people are dressed and the stores that dot the little streets connecting it all. As I sit here and observe the people walking about listening to jazz softly blaring from the speakers I feel content. I don’t have the urge to see all the sights but just to be here and relax soaking in the atmosphere.