Upgrades are always an unexpected surprise and the hotel I’m staying at here gave me one. They put me into the executive suite without me asking anything of them. The costs are the same as the total was withdrawn from my account a long long time ago. The space provides me with the comfort to do what I need to do from a practical point of view. 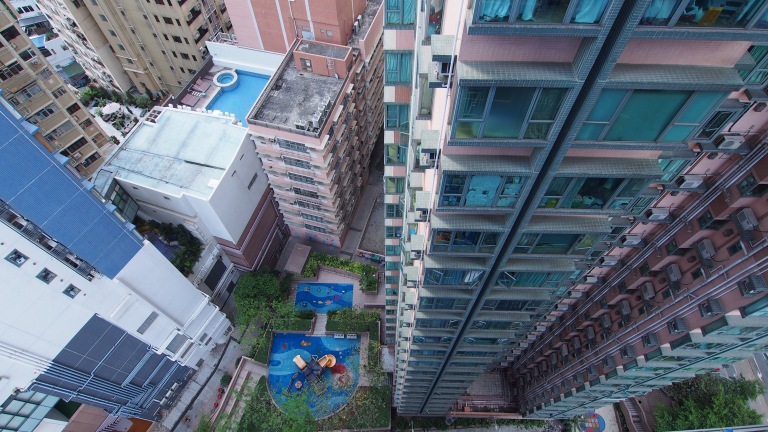 There is a need to constantly launder my clothes and since I have space and time clean my backpack that is constantly strapped to my back. It has absorbed weeks of perspiration and developed a distinct aroma. This is when the quality of materials used in its construction makes me notice them. The fact that the little top pocket is basically waterproof and that the lining that is against my back doesn’t really absorb water that well. 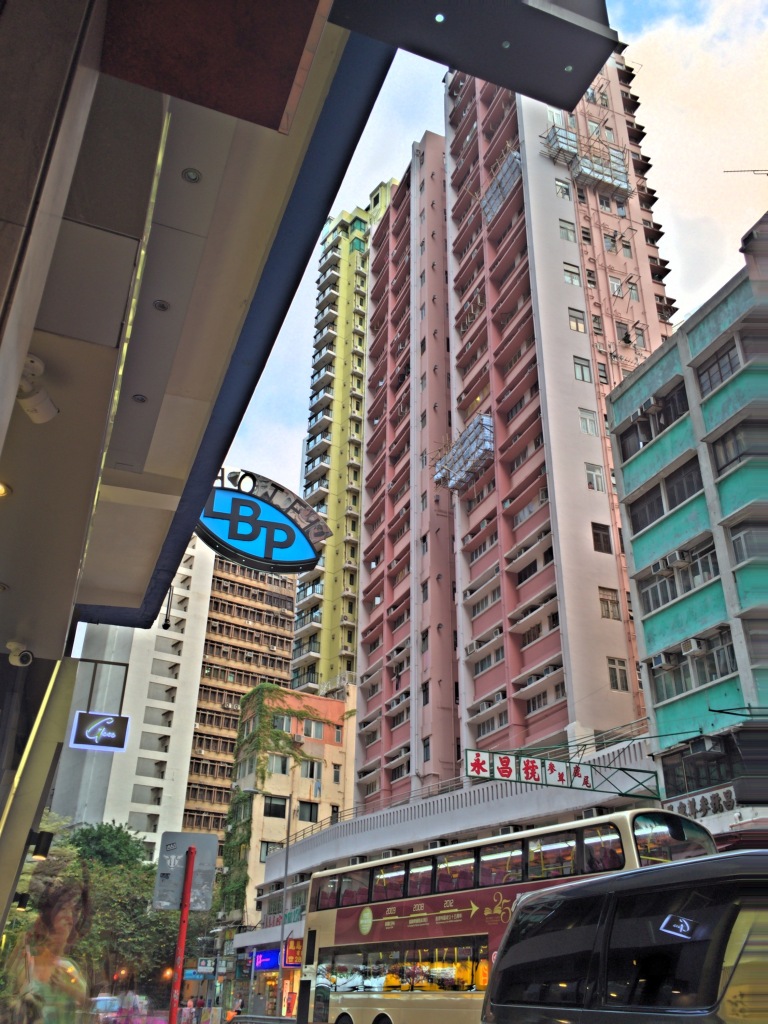 I’m taking a break from exploring the city for a bit. I walked to the ferry after breakfast. Along the way I passed a festival or parade of sorts. It was all women congregated and getting ready in cordoned off areas along the walkways. They were sitting on flattened cardboard boxes with umbrellas to shield them when they were changing. These women were not models but ordinary women from all walks of life and socioeconomic backgrounds. In different areas that I passed there were plackards and banners carried by both men and women that had a political bend to them. Today is Sunday and Mother’s Day and even though it’s still Saturday in Vancouver I skyped home to wish mom all the best. It was nice to see her and the rest of the family there. There has been an issue with their microphone. When they speak they overwhelm the sound and it cuts their voice out. It works alright when they are further away. I guess a bit of excitement when I call raises the volume of their voice. It may be the ethnic thing as well as I tend to speak louder when I’m around them too.

The other side of the harbor has an art gallery and what can be described as a walk of fame. Various different stars have their names embezzled in the ground in concrete. I found Bruce Lee’s and Jackie Chan’s which was actually quite popular. Many people queued to put their hands into the concrete cast he made of them. Further along there was a statue of Bruce Lee in an iconic pose shirtless and flexing in anticipation of a fight. It looks like it was from a scene in Enter the Dragon.

I ran into my seatmate from my plane ride here. It’s a cloudy day but the sun penetrated the clouds enough to warrant putting on the sunglasses. As I rummages through my bag to find them there he was. We exchanged our impressions of this city and some ornate things we did. We both found the price of a pint to be quite high. I was paying 73 HKD which translates to six quid a pop! It’s much cheaper buying them from a store. He said he met some people from the motherland who aren’t expats like ourselves. The increasingly improving economy means that some are able to take advantage and travel abroad exploring the world. I gave him the address to this blog and I hope he reads it because it means a lot to run into people like him. Running into him twice in such a big city with so many souls has significance. The few quid I spend to make the address short is worth it 😌.

I walked along Nathoon Road famous for its shopping and neon signs. I probably should be visiting it at night when everything is glowing but I’ve seen so many such roads now. The impression that I get from it with the mixture of high end luxury and small business shops is that of transition. Touts ask if I want a suit made or a knock off watch and my response is always the same as I keep walking past. There was one person that asked me if I wanted something else and I paused for a moment but continued on as I don’t want to jeopardize my safety in this land.

After touring the streets it felt like it was time to go back and rest a little before tonight. The signs shine brighter and the rain that fell intermittently will pass. I walked through another shopping center and came upon an upmarket food store and decided to get some grub there. They had all kinds of food imported from all over the world. I picked up some juices and fruits to replenish my stock that must be depleted a bit from all the traveling I’ve done. They had an excellent deli that heated my sandwich just right melting the cheeses around the pastrami contained inside. I ate it outside of the mall along a stretch of road that served as an approach and drop off point manned by security. It was actually relatively quiet there away from the throngs of people inside and everywhere else. This place is always on the move there are people throughout. 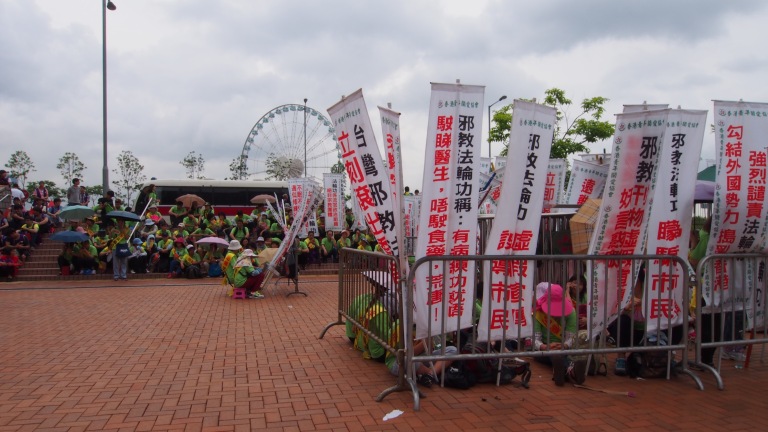 I was sitting outside drinking a coffee and writing. The coffee was finished and I threw out the cup up the road a little in the bin. In the time that it took me to get to the room on the twentieth floor it has began to rain hard. Good timing on my part. I wish I had the same kind of timing in other aspects of life although I can’t complain.

There is some kind of magic that I’m after that wasn’t anywhere to be found tonight. I took a ride on the double decker tram to the other side of the island just to see what was there. The late afternoon stretched out into the night with the rains dampening activity. What is it about Sunday nights and the feeling of just wanting to stay in. I fought this feeling since there is only a limited time that I have here on my own. Tomorrow the next phase of the journey begins and its progress will be not of my own design.

The tram that is in operation here is great. The windows roll down making it ideal for taking photographs from a higher angle. As I climbed to the top and looked for my seat I spotted a row that was empty but with a puddle where I would have sat. I valiently used my hand to try to wipe the water away from the seat when a lady gave me a tissue to wipe he rest away. Thanks I said do her. It was a nice gesture.

As we rolled down the tracks the myriad of shops and flashing lights beackoned for my attention. I kept pace with our progress on the map the update giving me an idea of my progress through the city and the parts we were passing. There is an abundance of walkways crossing over the road. The city is no longer just a two dimensional expanse of real estate it is very much vertical. The tall buildings are just one example of that the walkways are another. They allow for smooth padestrian passage  over the motorways. Everything is connected in a symbiotic way. There are a lot of stairs to climb but that is eased with escalators in sometimes the most unexpected places.

When I got to the end of my journey eastwards I decided to look for a place to eat. I found one but they were closing and they gestured for me to get out. I continued on undaunted knowing there will be another somewhere close. Lo and behold there was! It’s golden sign back ones for me to come in. Their menu was even partially written in English with pictures of what I was to expect to get. The descriptions for Chinese style dishes are not that precise. You mostly know the type of meat you are going to get and the level of spice. I got the spicy braised boiled beef with vegetables and steamed vegetable dumplings. However that is not what I got. Instead of the rice I got spicy pork with pancakes. I guess my pointing skills need a bit more work. When the dumplings came I was halfway through the pork. They said they wouldn’t charge me for it and ate them themselves. The food was delicious. As I ate I contemplated what to do. I decided to have a drink in the same area as yesterday. I found the team station and headed that way.
I missed the stop and had to walk a little to get there. It was already close to midnight by that time. The place wasn’t as happening as it was yesterday either. The one place that had a lot of people in front was due to the bunch of guys some shirtless spraying each other with beer that they were shaking in the bottles. I didn’t share their enthusiasm for such activity. There are 7-11’s there and there is a relaxed attitude towards open alcohol in the city as far as I can tell. In this area it seems to be the norm. Instead of spending a high price inside I decided to go with this option. I just needed one beer.

A guy approached me as I watched the festivities and the people walking past and asked how my day was going. I told him it was fine. I said that yesterday was better here. This was just a preamble to him asking me if I needed some Charlie. I said if anything I’d take some green and then he proceeded to tell me how much it would be. Three hundred HKD! I said are you kidding me. He said that it was hard to get here and that it was the going rate. I understand his dilemma at getting it here or even growing it here but that is a ridiculous price that I wasn’t willing to pay. In retrospect I should have asked him how much the other stuff was going for just out of curiosity. I knew there were takers for whatever he had ’cause I saw a deal go down not too long afterwards. An older wealthy looking man scored some of his stuff. It was the classic one guy holding the other drumming up business. It’s smart working in teams.

The crowd meanwhile has thinned out a bit. Long ago paired up in a drunken tango supporting each other as they streamed toward the taxis waiting down the hill eager to take them home. The bachelors sitting at tables watching it all move along. It’s an ecclectic group of people all in one place.  Maybe I just didn’t feel like being a part of it so I left. My hotel is not far relatively speaking. A bunch of blocks along Queens Road and I’m there in front of it. The roads and sidewalks are deserted except for the few stumbling home late from the bar and the people actually doing some work. The late shift people who have no choice but to take on the jobs that keep them out late. They keep the city going delivering and taking away all the stuff that doesn’t have its place from wherever it came.

So it’s my turn now to return to my temporary abode to prepare for tomorrow in the morning and make my way to the meeting spot to see with whom I’ll be spending the next three weeks of my life.