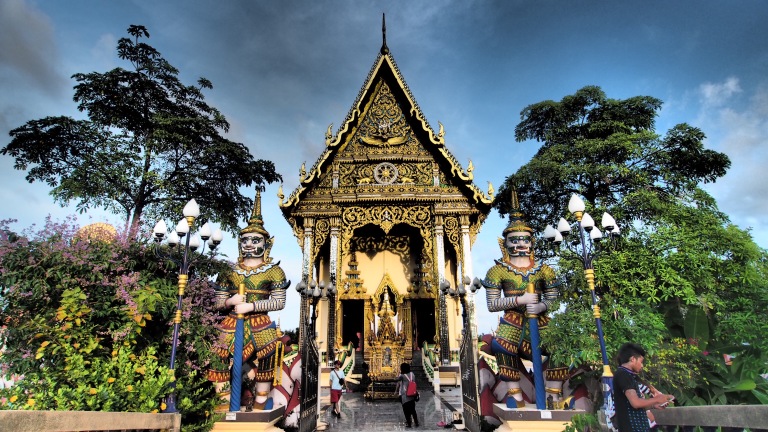 Late nights turn into late mornings and so on. It isn’t that bad however as we are on an island and on islands things work a little bit differently. We were supposed to meet up with Hiro and Em at noon but that turned into one. They are gracious enough to show us around the island in the car they have for one last day. 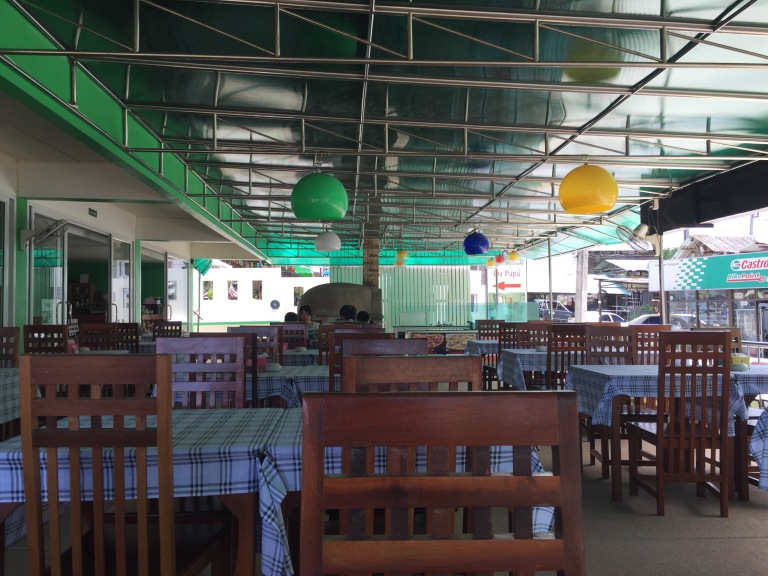 We had breakfast at a spot near the hotel. The special price we got for our hotel didn’t include breakfast so why not roam a little and discover something new? We saw a sign advertising breakfast right next to our hotel and it was an Italian place. I figure they would have good coffee so we went. The waiter was an older Italian gentleman who was really nice and the coffee was good as I suspected. 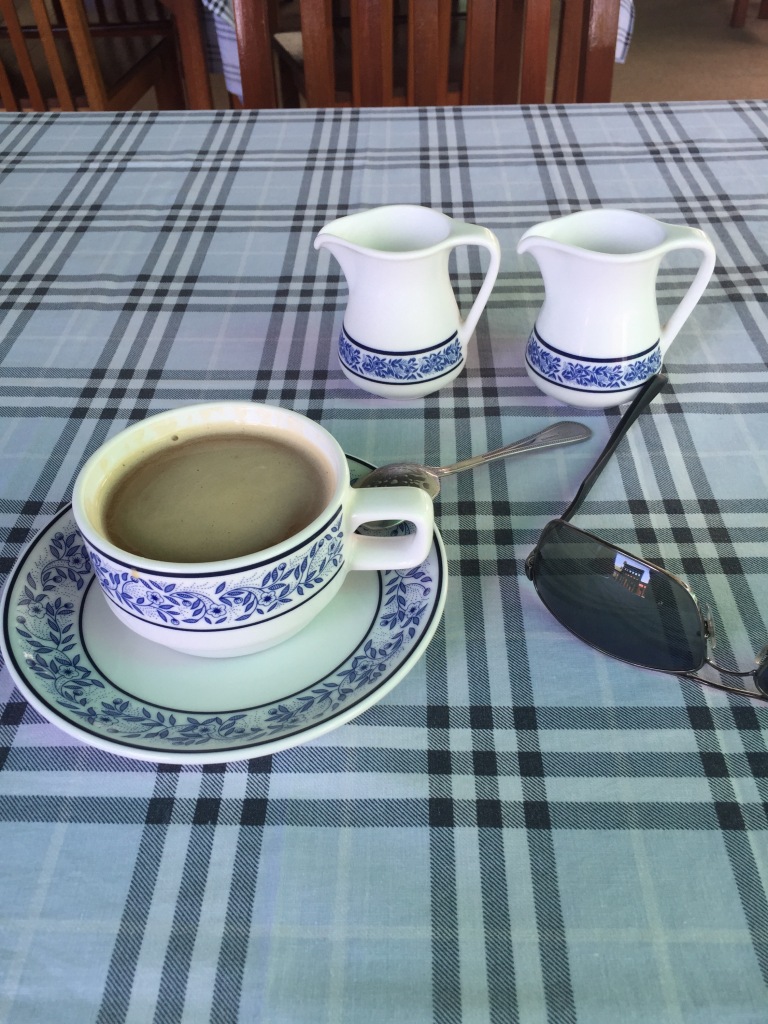 The stuff I brought with me and some of the things I acquired since leaving have begun to weigh me down by volume. It was time to send out a package with some of the things I don’t need. I edited the contents of my luggage with ruthlessness and got a ride to the post office to sort out the shipping first before we continued on with our exploration. The process was quick and not as expensive as I would have thought. The stuff should get there in two weeks.

The first stop was a view point along the road. It offered a good start to the journey. The waters off the island had a beautiful hue that almost blended with the sky perfectly. We took in the view and gawked at the giant bug that was flying around and landing on the same spot over and over again.

We were going to see a curious rock formation next. Hinta Hinyai as the story goes if the physical expression of grandparent’s love for their son. They died during a journey to the island during a storm and their form in rock is a symbol of their pure intensions to secure a wife for their son. It’s a neat little place. 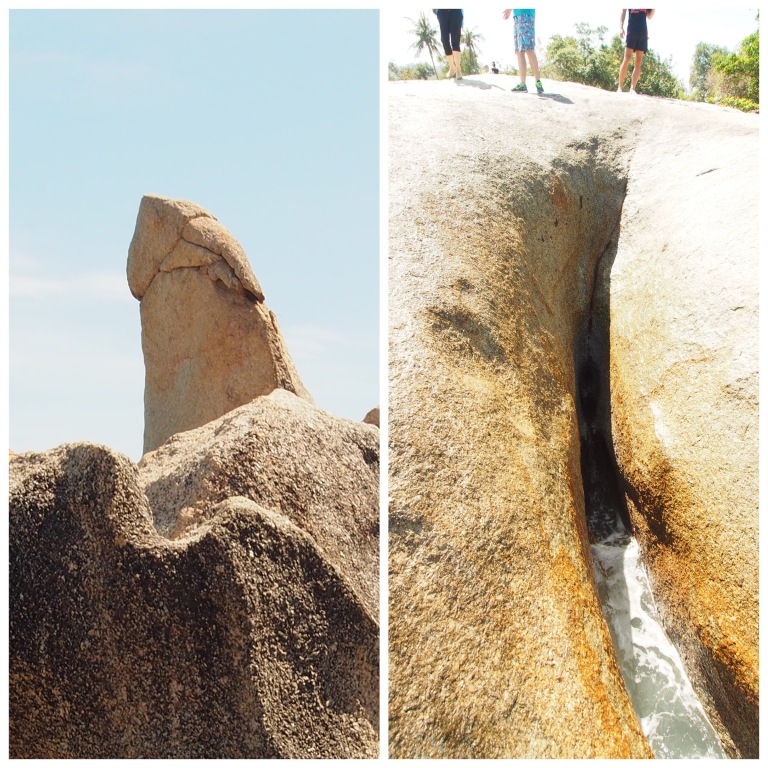 Even though Hiro has been on the island for a while he has never visited the Secret Buddha Garden. It is located in the middle of the island high on the mountain. As we made our way to the road leading up to the mountain location we stopped at a temple that housed the Mummified Monk (Wat Khunaram). As we got out and looked at the building housing the Monk the wind blew and blossoms started falling creating a magical mystical impression. There is something to synchronicity.

The road to the Secret Garden was meters from the Monk’s temple. We saw the signs and followed them until they disappeared at a critical junction a fork in the road. We went the wrong way at first but quickly adjusted as the maps and GPS kicked in. The Honda struggled up the steep gradient and as we approached our destination the low fuel warning came on. Are we going to make it? We joked.

The Secret Garden was built by a retired farmer who began building it at the age of 77 and continued to build it until his death at the age of 91. As Em explained to me the garden represents different scenes from Buddhist mythology. It had a whimsical serene quality to it.

We stayed there for a while slowly making our way through the place admiring the various aspects contained there. It had an “Indiana Jones” feel as nature slowly spreads its tenticles into the buildings and structures. 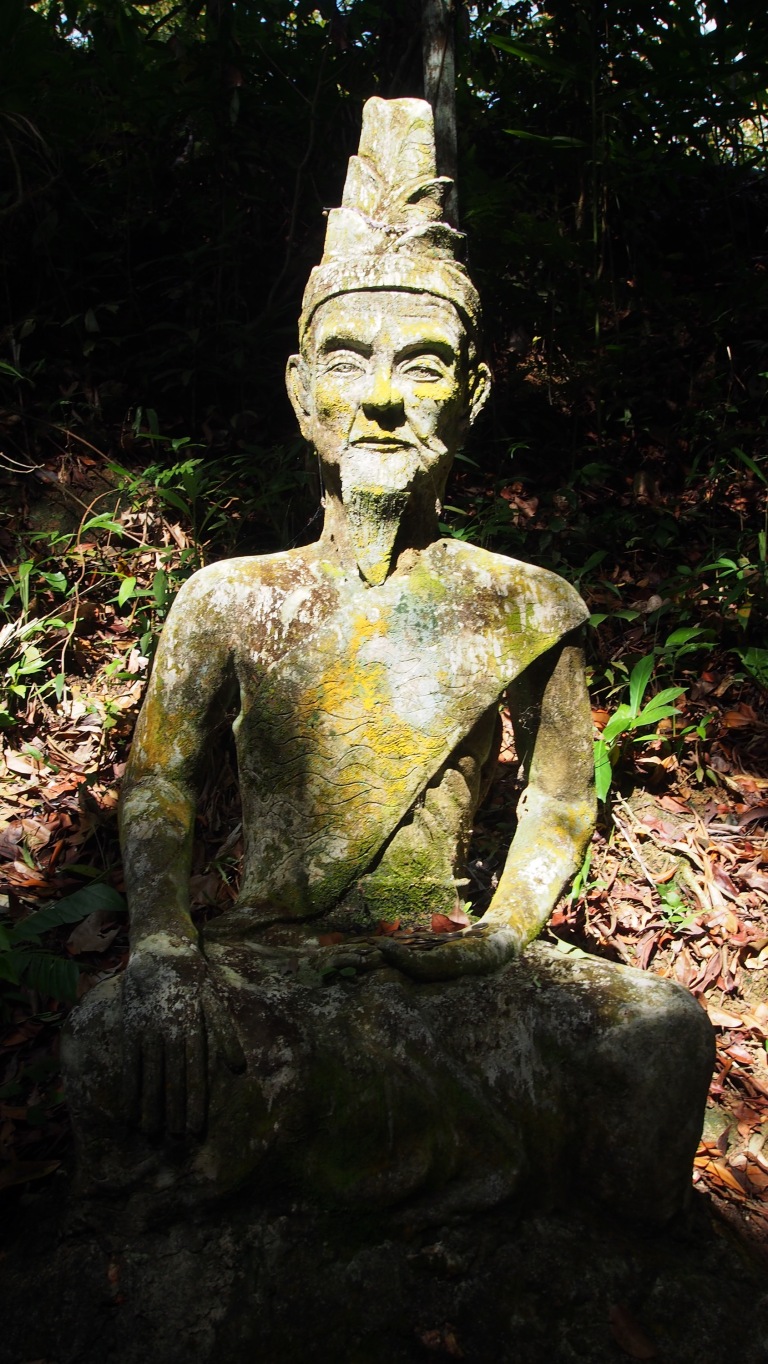 On our way down we were going to stop at a viewpoint but due to the principle of paying for parking and paying for the privilidge of walking a path we kept going down. We drove halfway around the island by the time we got to the Big Buddha Temple (Wat Phra Yai). 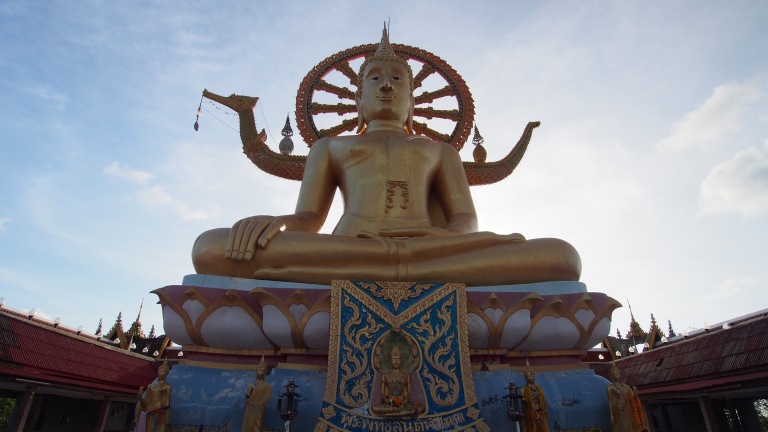 I made the climb up the stairs to get the shot. With the sun slowly starting its descent the enormity of the statue itself blocked the light emanating from it. There were signs and posters at the bottom of the stairs explaining the necessity for women to cover up to respect the Buddhist Monks need to avoid looking at exposed flesh. The posters also emphasized that Buddha’s image should not be used to adorn kitsch trinkets or be used as tattoos.

The last temple we went to is Hiro’s favourite on the island. It’s called  Wat Plai Laem. From the description in my Thailand map it is a newer temple that incorporates Thai and Chinese design motifs.

The sun was beginning its descent towards the horizon and the light gave the sparkling ornate temple a magical mystical quality. It was a very peaceful place. 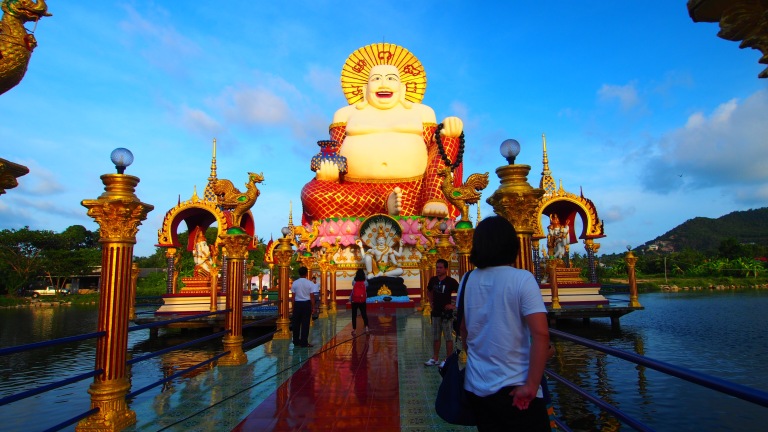 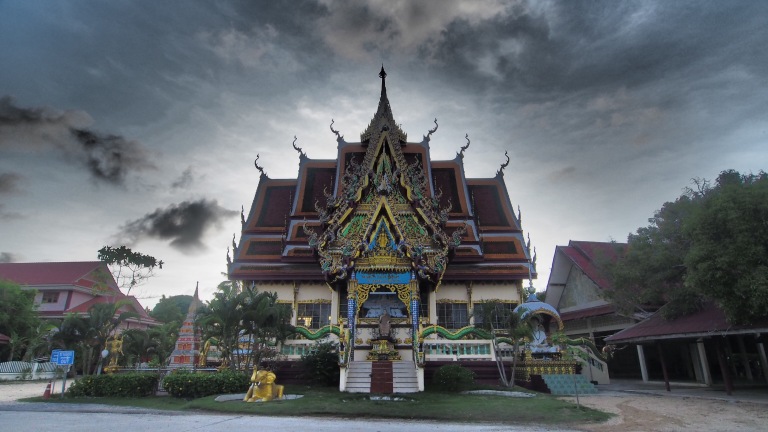 After the last temple we essentially headed back to the hotel so that each of us could do some things before we met up again for drinks. We booked our tickets to Bangkok and got ready for the night. We met up again at the Islander and had dinner there.

The food is really good and the location is central along the strip. The various people that pass along add color and spice to the evening. We had a few beers and jumped on the back of Hiro’s scooter to travel a few minutes to another strip of clubs in the Red Light district.

This area has a seedier feel to it. Scantly clad women and lady boys gyrating  to the rhythm of pumping beats. There are poles everywhere inside each of the clubs and occasionally one of the girls swings herself around it waving her hair as she completes the revolution. It’s both tantalizing and sad at the same time. On this night the bars and clubs are mostly empty and the few patrons that are inside get plenty of attention from the talent assigned to the club.

We had a beer at one of them and then we headed off to a “locals” bar. There were no other tourists there and my tanned face must have stood out. The place definitely had a vibe to it. It was first bumping to the beats before the band came on and started performing what was explained to me as “Thai country music”. It had a rock/ballad sound to it with various singers interchanging smoothly between songs. There was no pause for applause and adoration just one song after another. The crowd kept passing up drinks, money and cigarettes. The gifts were all accepted and the songs kept being performed.

It was getting late and we soon rode on the back of the scooter to the hotel. I’ll be back here next weekend to enjoy this island for a bit longer.