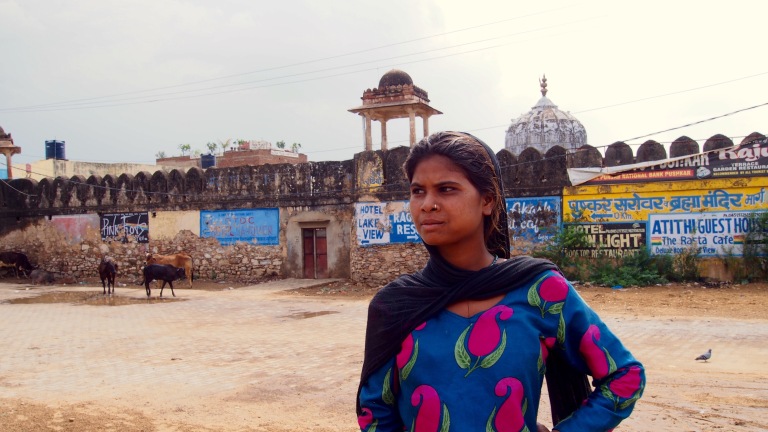 The plan was to drive three hours to Pushkar. That much was planned the rest was unknown. What am I going to see there? What is it going to be like. A casual perusal of the compendium that is Wikipedia I read up the story of Pushkar. It is a fascinating place from the story of it and as I opened my eyes in the morning getting there became an interesting endeavor all on its own.

This drive gave me a chance to get to know Harrii a bit more. I’ll be spending then next seven days with him. We touched on many topics one of which was the way traffic works here. He said you need four things to survive the traffic.

I kind of liked that list as it is applicable to many traffic situations throughout the world.  We talked about the outer world and how different or similar it is to India. He said that things are getting better in India but that tourism is down. He has been doing this job for many years and he has driven around many clients throughout those years. He even has a TripAdvisor review that o will have to contribute to when I get to it at some point after we part our ways.

The drive was pretty uneventful save for the odd things that occur on the side of the road which pass too quickly to capture on film. I’m getting used to the traffic and how the horn works as a communication tool. It’s in the congested towns that it’s use truly comes into fore. The switchbacks that become crazy lane changes by the bus that can’t make the radius in front of us. The  pile of bones overflowing the edges of the slow moving little lorry having only realized its cargo after passing it. There was some good coffee at the pitstop but overpriced pop and water to what I’m used to on the street. The conversation there with a passing tourist from Italy making his way to Jaipur. We made good progress on the highway. Harrii gave me some tips about what to expect in Pushkar. He told me about the history and significance of the place. Temples to Brahma are rare and he is one of the ones included in a sacred trinity of the main ones. The lake is sacred too flooded by pilgrims who bathe in its waters and worship at the temple there. We arrived at the hotel almost precisely at our scheduled time. I checked in and prepared for my outing in the town. 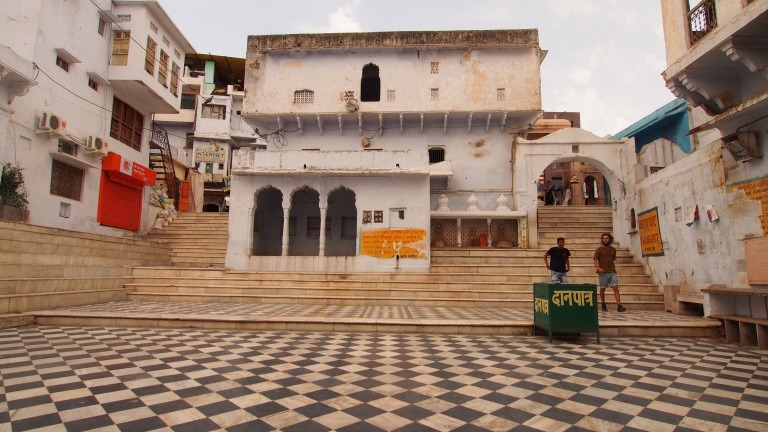 Harrii dropped me off close to a prominent temple in town. I was to meet him at this specified location at sixish giving me plenty of time to paruse the city. As I left him and walked into the city a man tried to give me a flower in my hand. This was what I was warned about. The man persisted in following me and proceeded to tell me tha he just wants me to participate in a prayer for good luck and a blessing. I knew that this was coming and that if I do this once I get my initiation done and I get my pass. It’s a red string that is tied around the wrist indicating that I’ve performed the ritual. It is also a sign of respect to them and their place. It doesn’t look it but this is one of the holiest sites in Hinduism besides it would be interesting to experience its performance. The flower had to be carried in the right hand for luck. I was lead and directed to the spot down the stairs at the edge of a pool by the lake. I had to take off my shoes and was introduced to the priest that was going to perform the ceremony. We sat together by the edge of the pool and I listened to him as he explained the ceremony. First I washed my hands in the pool. The flower that was given to me earlier was then placed there and I repeated word for word the prayer in the native language which was immediately translated into English. I threw the flower into the pool. I washed my hands again and he placed more flowers and spices into my hands that was followed by a further prayer blessing all of my family by name. We then talked about the donation I was going to make and this is when negotiations started. I didn’t have that much money in my pocket so he had to make due with what I had. He didn’t seem pleased with the amount but he finished off the ceremony with another hand washing ceremony blessing the coconut with the red string on top of it. He tied it around my wrist and marked my forehead with the remnants of a red spice from his dish. It was an intense experience and as I put on my shoes and walked away I explored my feelings about it. I wanted to have a seat and have a coffee but first I had to find an ATM.

Finding an ATM proved to be a harder task than expected. I walked along the Main Street searching the signs for what I needed. I finally found one and from the other tourists found out that this was one of only two in the city and that it was the only working one. I continued on in search of a coffee shop. I came upon one that was on a curve in the road and it provided a nice angle to view as people moved by. It also felt like it was going to rain as I felt a few drops fall on me from above. I sat at a table and took note of the other westerners enjoying a drink inside. As I looked at their menu the rain began to fall. People huddled under the makeshift awnings providing shade. It was raining pretty hard and it even began to hail. Some of the awnings broke under the weight of the water that pooled inside its stretched surface.

We started to talk about our travels as we periodically stood to take photos of the scene in front of us. One was busy on her phone the other was just as interested in the events unfolding before us. She was from Israel on a walkabout from her life having finished her school and stint in the army she decided to travel through India. Her friend just joined her and they were leaving soon to travel to another town. Nata has been on the road for three months already and she will keep going until her funds run out. They soon left walking off and disappearing beyond the curve into a crowd. I continued on periodically turning into and abandoned alleyway to see where it goes. 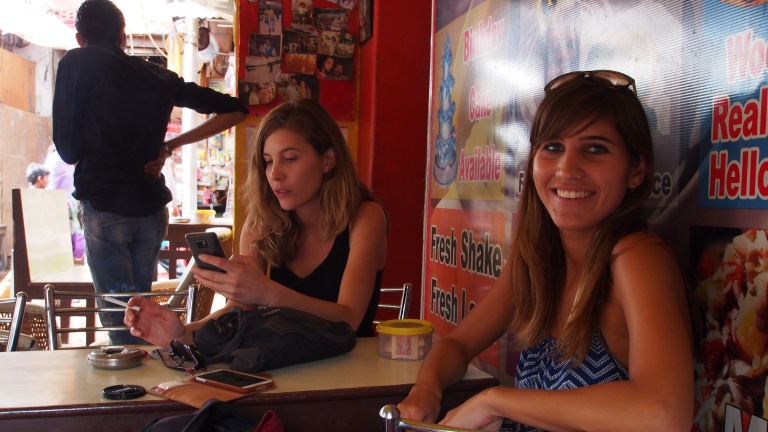 I found some interesting scenes and the remnants of what once were ornate buildings now left to age disgracefully into ruin. Not all are unkept some flush with tourist money have a charming finish inviting you to visit. At edge of the town I saw what appeared to be an old fort but really it hid a temple abandoned to time. It had a wonderful setting in the undisturbed duff collecting on its grounds. I was asked if I wanted to take her picture and I did not expecting the force of her expression in the two captured frames. Her friends also wanted to pose not to express but for the reward that comes at the end in the form of a note. 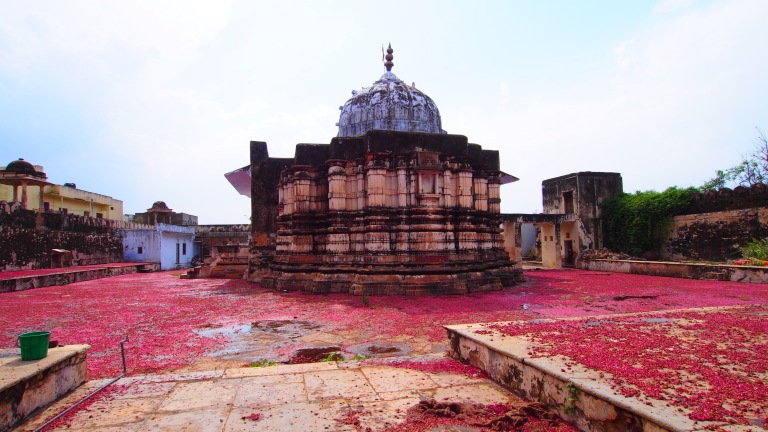 I decided to eat as another rainstorm was brewing in the air. Out of the Blue was literally the name of the restaurant. I decided to climb its stairs as it offered a better view of the town. I was using my time efficiently I thought to myself. The storm passed and flashes of lightning illuminated the sky I sat there with fellow tourists waiting for our respective drinks. I had the table all to myself and I had a good vantage point to a temple across the way. I watched as the monkeys played with each other trying to stay on the slippery surface of the domes on the roof. 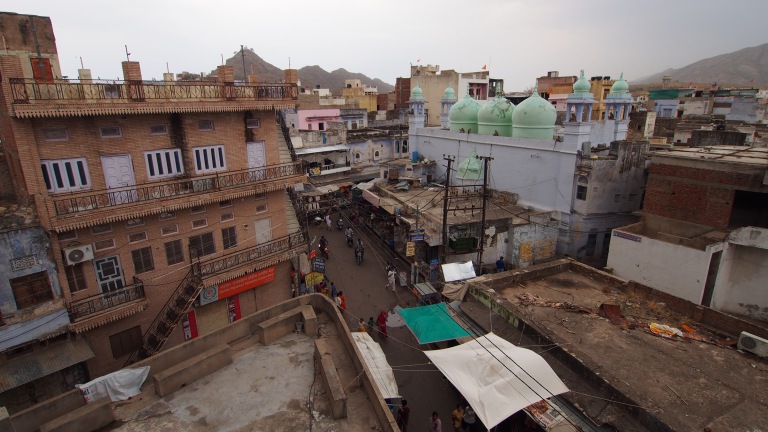 I tied to invite some of the others there to have a seat and chat but the couples mainly stayed to themselves. Eventually though someone sat down and we started to chat. Renault (yes, like the car) sat down and we talked about our experiences in India so far. He landed in Dehli and has made his way through Jaipur to here. He essentially landed in India at the same time that I have. He decided to travel through India as he quit his job a while back and wanted to travel for a bit. We talked for a while and even had another coffee. There was another storm that came and went except that this time the wind propelled the rain in such a way that we had to keep moving away from the edge. A momentary power outage delayed the coffee’s arrival. We made plans to meet up in the morning and hike to one of the temples we saw from our perch inside the restaurant. It was soon time to part ways after exchanging our contact details. The food was really good at that restaurant. I ordered more than enough to share with my newly made friend.

Got back to the hotel and my hotel room offers so much modernist contrast to the organic feel of the town. The comforts of a hot shower and a serene atmosphere within its stylish decor. I unpacked and proceeded to do all those things deemed necessary for wellbeing writing and relaxing in preparation for another day. The hours roll by as I sat at the bar in the open air by the pool a singer performs for a crowd. I hoped to find others to talk to but that wasn’t to be. The cold beer went down nice after inspecting to make sure it was the right temperature before it was cracked open and poured expertly into the glass.

One thought on “Welcome to Pushkar on Day no. XX ”