A lot has happened over the past week. Significant events that are only played once and one has to make the most of them when they are actually happening. There is no rewind, there is only forward. All of this is being played out in bitter bitter cold Saskatchewan weather. Supposedly this is one of the worst winters in memory. It might have to do with all of the snow but also the minus twenty degree weather.Some days it has been a bit colder when factoring in the wind chill. Parts of the body become numb from the cold and as much as it could be said that this is miserable I find it exciting. On clear days with the sun shining everything has this brightness from all of the reflected light. The hue of the setting sun matches some of the colors of some of the adjacent buildings giving them a strange warm glow. 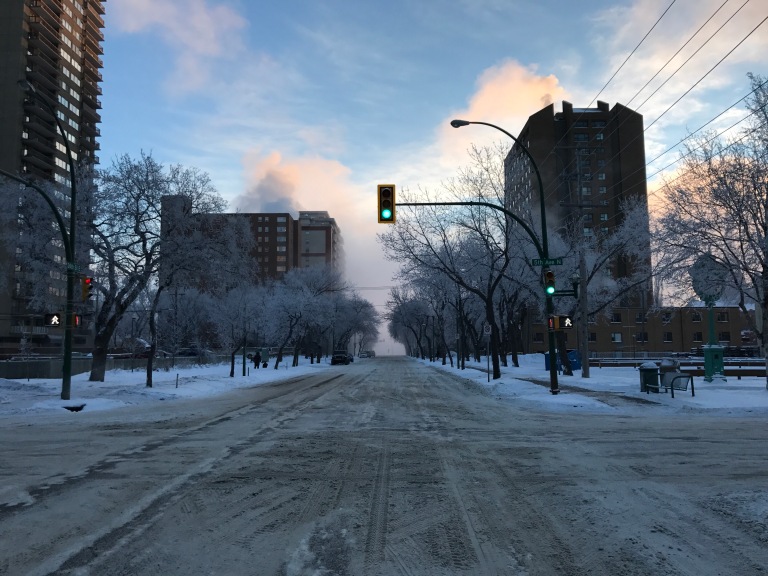 The day after New Years Day doesn’t have any special name it only has a number. For us it will always be known as move in day for us. We woke up early knowing that the truck was going to be here at around one in the afternoon. We went to the conglomerate coffee chain so that we or more appropriately I could connect to the interwebs. It gives me a chance to check on things and send out a few messages. We were going to go and check to see if our packages came in on the Greyhound. It’s been three or four days since it was sent out.  It should be there by now. As we sat there warming up around a cup and some tasty breakfast sandwich a call came in to Chrl’s phone. The packages have arrived! It was joyous news. After we finished hanging out and doing our thing we went to the shipping office and picked up our packages. We cabbed them over to our building and I managed them the rest of the way. Chrl still has some soreness that has been preventing her from fully being herself. She is taking it easy so that she doesn’t strain the problem any further. It’s a good thing that we have people moving all of the boxes for us. There are a lot of books and heavy things like kettlebells in the bucket that we shipped from the Lower Mainland. There were just a few quiet moments in between us coming home and the call from the moving truck saying that they are fifteen minutes away.

I went downstairs to meet up with the guy. The first person there was one of the moving guys. The company hires locals to do the grunt work. I took him upstairs to show him the layout. When we got back downstairs the big lorrie was outside the building. The driver was a short wiry fellow in his early sixties. Bill had the look that said that he had a hard life or he lived it the hard way. He mentioned something about difficulty breathing and smoking too much. He said that he broke some ribs three years ago and that they didn’t heal right because he hasn’t slowed down. He feels it now. Our stuff was in the back of the trailer. As he opened the door it was a miracle that the stuff didn’t fall out. The first thing I noticed was that the mattress at the back wasn’t ours. I was beginning to suspect that there might be something wrong. Where is my list? Had to go back upstairs to get it. 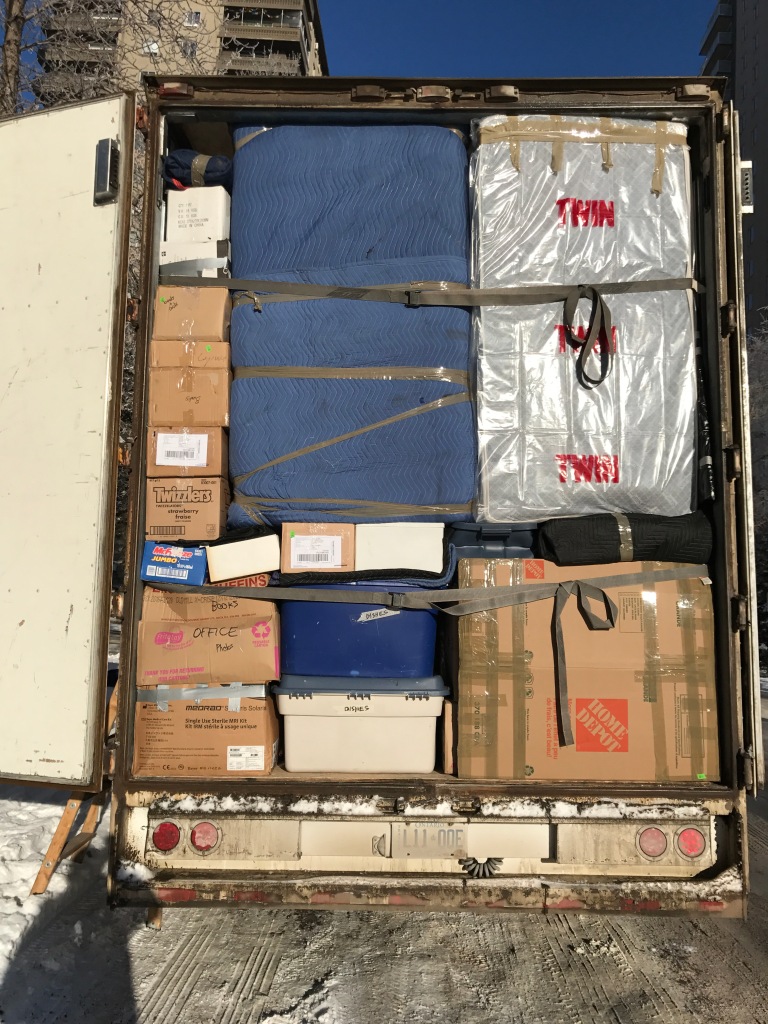 It turned out that the beds indeed were not ours. These were from another place that they were going to next. Bill was teetering on his wooden ladder passing things down to the guy below. There were two of them a young one Sean and an older one Dave. Both of them were very talkative and courteous. My job was to keep open the door for them as they moved things in. Bernie our building manager left Frank in charge of the keys and the building. He went away on vacation. He was very adamant about giving him proper notice and now he isn’t even here. Mind you this is still a bank Holiday here. Bill was going on at how busy he is driving and how treacherous it was going over the Coquihalla. A lot of snow had fallen lately on the mountains. Every time we hear these stories we think about how good of an idea it was to hire these guys to move us. There is a picture of us in some UHaul at the bottom of some precipice. It’s all in the mind right? Chrl was a bt stresses about that but not after the decision to have movers do the heavy lifting. This is the first time for me having such help. 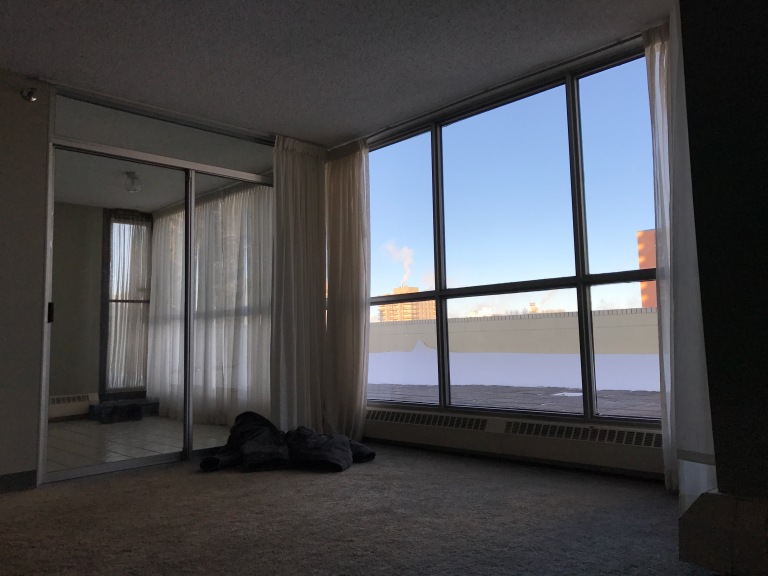 Every time Sean moved things off the lorry I opened the door and he said ‘Thank you very much!’ He said it pretty much the same every time. In my mind I was running out of things to say instead of ‘You’re Welcome” Material moved steadily from the lorry into the lobby and then onto the elevator. Upstairs Chrl sat in the kitchen as Dave read out the numbers on the boxes. She checked off each number in an appropriate box and this way all of the things were unwrapped from their protective blankets and stacked in the sitting room. The boxes themselves began to be stacked neatly along the wall. Within a matter of hours the sitting room was full of stuff. It looked like a lot more than we expected. That was mainly due to the way that the stuff was arranged. Dave chatted with Chrl as he did his thing upstairs. I watched Sean carry things into the building downstairs resisting the urge to help him or to carry things myself. With certain items I carried them in myself. The whole process moved swiftly after we figured out how to work the elevator properly. 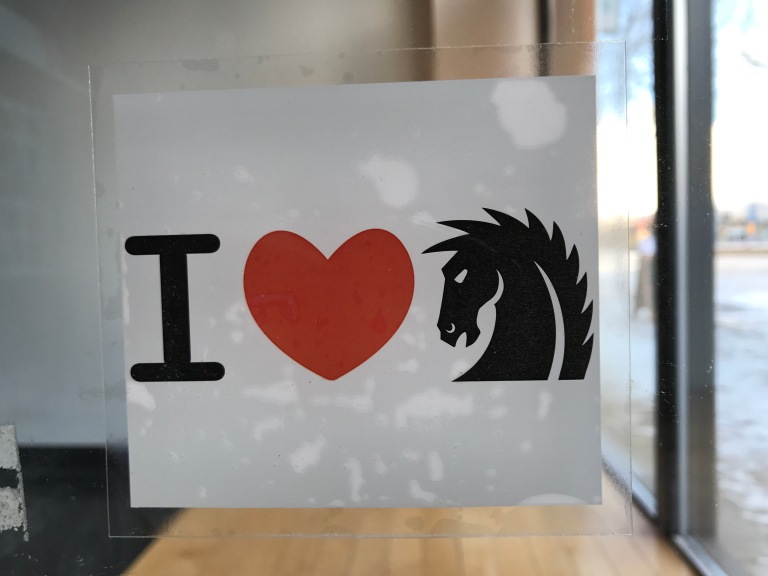 It is the first time that I am living in a highrise like this. Moving in requires that one reserve the elevator for the move. There is a key that the building manager has that locks the elevator allowing us to load a full load onto it before moving it up. The doors remain open for that task and the elevator doesn’t respond when someone pages the elevator. At first we thought that the right key was used but that wasn’t so. I had to get the replacement guy to get the proper key. The elevator was also taken by someone when we were outside. They left it on the twenty-first floor. Muppets. All in all despite the cold weather the move went relatively smoothly. There was one item unaccounted for. According to the list it was a kitchen matt. Bill had a few more deliveries in his trailer and he promised to call and return the item once it was found. A few days later he called but we told him not to bother with returning it. 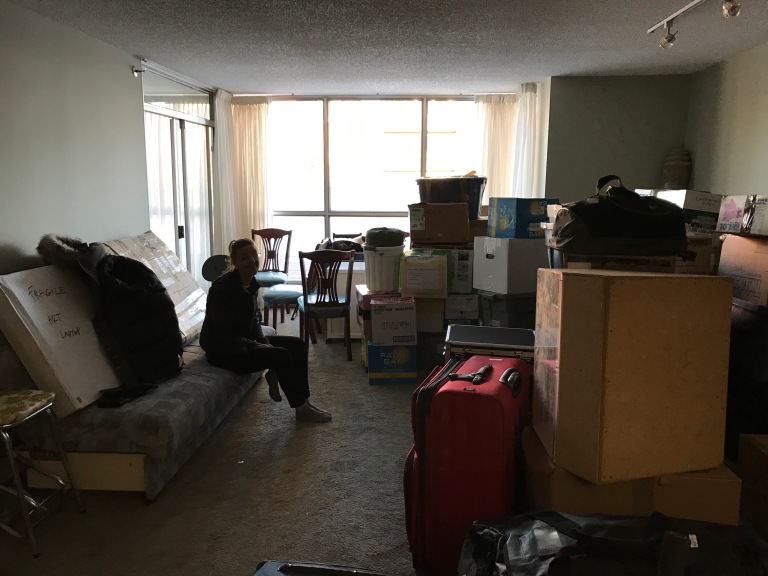 We were faced with a mountain of work. Once the guys left we looked at each other and began the steady task of sorting through the boxes. The first thing was to organize the boxes and things according to what they contained. Books wouldn’t be unpacked just yet. All of the kitchen stuff Chrl was going to take care of so I passed her those things. Our mattress was in the bedroom so we could finally get a good night’s rest. I’m all for roughing it every once in a while but the floor is much harder than the ground when camping. Some of the things that I have haven’t been opened in five years so I don’t really know what is inside of them. Chrl to hasn’t seen some of her things in a while either. Thankfully both of us edited our possessions when we were packing. I remember throwing out and giving away a lot of stuff. Chrl also got rid of a lot of stuff before she moved out of the Broadway flat. We thought we kept some stuff that we didn’t and kept stuff that we thought should have been given away. We don’t have a ton of space to display our knick-knacks. We will have to get some furniture in order to fully unpack everything. This process of unpacking will take a while to unwind.

The process of unpacking is creating order out of chaos. It is the opposite of entropy. Boxes with like materials are placed close to each other grouping them. Those boxes lucky enough to be emptied find their contents neatly arranged and the box itself broken down and added to the ever growing pile. These empty boxes lie neatly next to each other awaiting their next move. Clothes are dumped into a pile and then the process of sorting them begins anew. Slowly over the course of a few days we begun to win the battle with chaos. The organizational process had taken over our lives and we shared many chats while engaged in it. We talked about what we needed to get in order to fully settle in. We are in need of a few book cases, a bed frame and some kind of living room furniture. School was resuming for Chrl as well. They didn’t get a long Christmas Holiday at all. It was barely two weeks.

As part of our discussion regarding what we were going to do about furnishings it was decided that I should try to see if I could find anything in the second hand stores. We are also working within a budget of some sort. That budget is spend as little as you can. These are funny economics. On the one hand all of the necessary pieces like bookshelves and a bed frame could easily be purchased on the cheap in any of the thrift shops. The problem is finding something that is also aesthetically appealing. We are not young carefree individuals anymore who can explain away a tacky piece of furniture as just something cheap to fulfill a purpose. We are somewhat professional and mature now. We need to be able to proudly host a small group of people and have them enjoy our surroundings. We need to be able to enjoy our surroundings ourselves too. I am not averse to restoring some piece of second hand furniture. The beauty in combining old things together with new things is that it creates a completely unique environment. There would be some things that would have to be bought new. There will be a few things that I will have to build. Before I begin though I will have to see what I can find. Chrl had suggested a few places for me to go and check out. When she will be in school I will be on the hunt for stuff.