Waking up in the morning it took a few minutes to realize where I was. It is still early enough to stretch out my feet by going out for a walk and hitting up the cash machine for some money to throw into the envelope. The weather has turned bitterly cold over the past week I’ve been told. As I stepped outside the cold felt refreshing. A thick blanket of grey blocked the sun and sky but the color of the buildings brightened things up visually.

I didn’t have a particular destination. I didn’t take my camera with me just the phone on which to capture the doodles scrawled on the walls. People were still waking up and the breakfast my uncle made for us sat nicely in my stomach. These streets and this area is becoming more and more familiar to me every time I come here. I don’t even consult the map anymore just my navigational instinct. As my eyes search for interesting graffiti they also capture the landmarks and signs that serve as a canvas for street art. 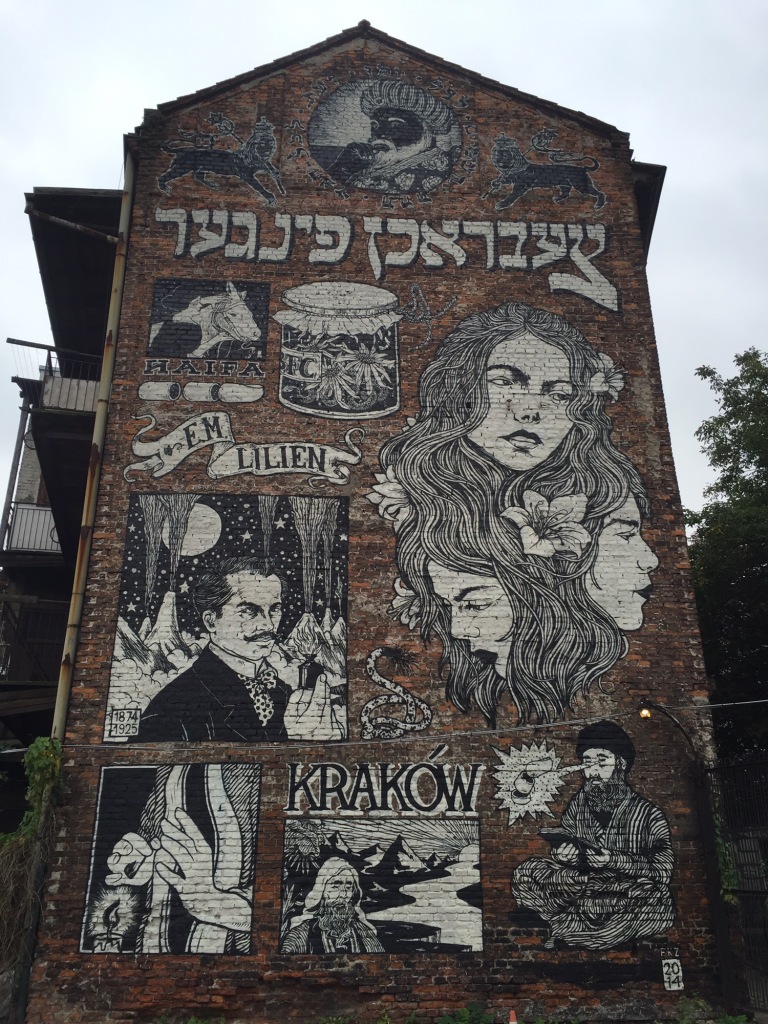 This time I made it to Kazimierz the old Jewish quarter of the city. It’s history can still be found in the buildings that are left behind. The fate of the former inhabitants is intertwined in European history and the extermination of many many people. Even on such a cold day there were groups of tourists that were being lead through these streets. Here the old Jewish cemetery still holds old bones and the cobbled streets harken to the old days.

It was a good walk but soon we were going to have to leave and drive a distance to the wedding. I still had to shave! No need to panic I managed to get ready and dressed all in due time. We were however late leaving the flat. We were eating lunch as my uncle mentioned that between the drive and the church service it was going to be about four or five hours before we ate again. That proved to be a smart move. 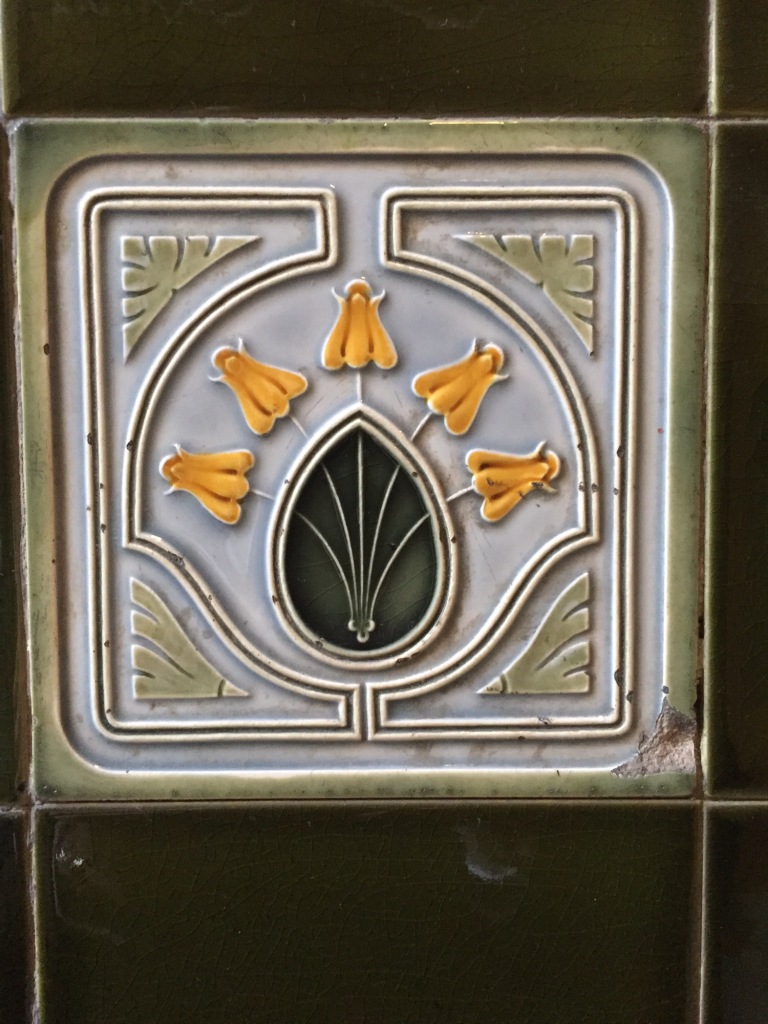 We headed out with some vague directions that my uncle had scribbled down on a post it note. Once we got out of Kraków we essentially headed east. We were following a road that was familiar to me from all the times that I’ve travelled to the airport. The road is a narrow winding road that has little room for expansion. Some parts of it are really close to the buildings that have stood at the edge since before cars were common. In order to make it to the church where the the ceremony was to take place we had to take a turn down an unfamiliar road to me or my uncle. As we drove he shared with me stories from his youth. It’s amazing what he remembers considering how old he was but then again those were different times. Those were hard times during the war. As we approached the village with the church my uncle made another wise suggestion… It was raining now and we were quickly running out of places to relieve the pressure that was slowly building in our bladders. Here we were two sharply dressed men in the rain by the side of the road. As we drove up to the church and parked I pointed to the bushes by the side of the church and said ‘we could have gone there.’ He responded shrugging his shoulders and throwing his arms up ‘how was I to know?’

We were two minutes late as the couple were already inside the church listening to the first reading. The church itself was new and it had an octagonal shape with the altar finished plainly and statues of saints flanking the Virgin Mary on either side. One of the saints was Maksimillian Kolbe who famously took the place of a man who was chosen for death at Aushwitz. The man survived and his story elevated the man to sainthood.

The sermon echoed inside this space. We talked afterwards about how hard it was to understand what was being said. There were also all those pesky photographers taking their photos all the time. The whole thing will certainly be well documented. The priest talked about the commitment that two people make to each other and how a couple will go through various highs and lows throughout life. This is the standard fare that each couple years at the beginning of their lives together. It goes without saying that life will have such a trajectory. Waves of experience wash in onto shore continuously. Some waves are propelled by a nice breeze while others from more unsettled systems. How and where we build our homes determines how well they weather these storms.

I remember meeting my cousins kids for the first time all those years ago. They were performing at some band competition and were dressed in uniforms. We got lost getting there and managed to get to their scheduled performance just in time. It seems I have a habit of getting to their imperative events just in time. 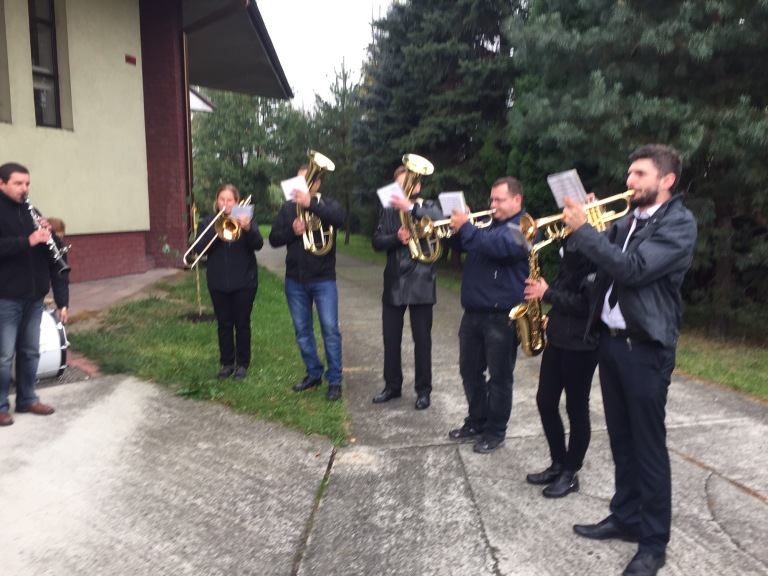 Today I see him beaming as they exchanged their vows. I had never met his significant other even though they have been together for over three years. He was away at school and that is where they met and obviously fell in love. Even though it’s been a journey to get to this wedding I’m glad I came just to see that. This is the first wedding that I made it to for any of my family. A lot of the weddings happened while I was little and halfway across the globe.

In the old days the groom on his way to the wedding had to pass through a series of ‘gates’ that were set up. These were gates where some sort of payment or performance was supposed to occur. Usually this ‘payment’ was in the form of a couple of bottles of vodka. The gate keepers were usually dressed in some sort of a costume and the gate could be as little as two chars blocking the road. Back then instead of a car the groom may have been riding on a horse drawn carriage and the whole atmosphere would have been different than how it is now. Regardless the exit from the church was blocked by one such kid with a scarf tied to a tree and he with a wicker basket asking for some spare change to give.

We somehow became the lead car in a procession of autos going to the reception hall in another village. We only had the name of the village as the hall didn’t show up in the oracle. My uncle is a bit of a slow driver especially when we drove down the winding parts of the road. We laughed as everyone followed us when we missed the turn and had to turn around. 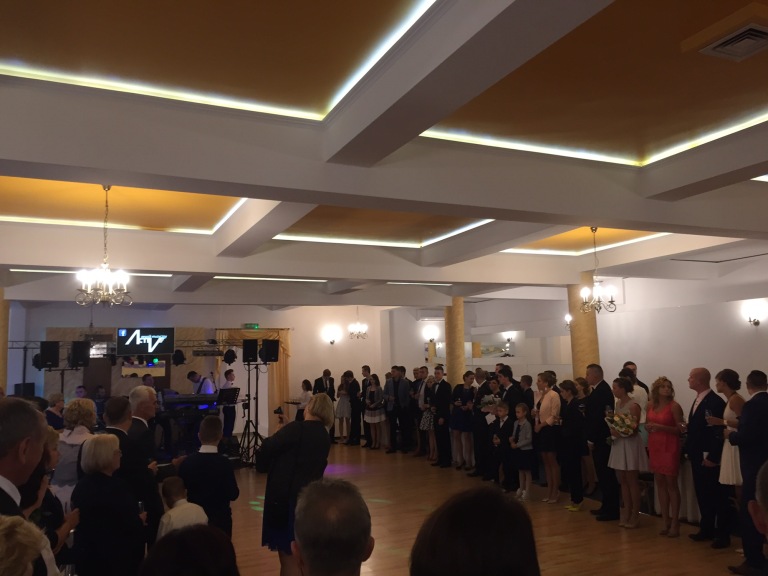 At the beginning of the reception everyone was given a glass of champagne to toast the bride and groom as they entered the hall. They then threw their glasses behind them and they crashed on the ground. The groom has to then sweep the broken glass and we laughed a bit as this looked comical. Dawid had a really short broomstick and he is a really tall man.

After this we lined up to give our presents to the couple and individually wish them all the best. The line up was long and as I approached to give them my warmest wishes I kind of introduced myself quickly and made a comment about not knowing what to do. Dawid in his wisdom just told me to ‘kiss, just kiss’ and I planted two kisses on each of their cheeks. His bride Nikola must have thought something is strange with that one.

It was time to sit down and have the first couple of courses. We were given soup and then a variety of salads along with a variety of warm meat dishes. It was at this point we got into a discussion about wheather or not a bottle of vodka should be opened when placed on a table. Some were of the opinion that it should remain closed. If it’s being served then it should be opened right? We had a few shots to discuss it. Then the first dance happened.

Polish weddings differ in that there is more dancing and less talking. The band at the wedding played a variery of traditional village polkas and some classic pop songs. I danced with some of my cousins and I realized that the secret to surviving weddings is by dancing. It will have to be something Chrl and I will have to practice together. Dawid and Natalia looked like they danced together before. Their dance was spontaneous yet natural. It was all well documented.

I was sitting with my uncle and all of my first cousins at the first table. I managed to catch up with one of them as we haven’t seen each other in a really long time. He has been busy working and raising his kids. He lives a bit further away from his siblings and with all that goes on he hasn’t been able to visit as often. It was good to catch up and see all of his kids too as they have matured handsome and beautiful young adults. Everyone at the wedding was dressed nice and looked attractive. Besides my immediate family there were also Joasia’s neighbors including Adam my oldest friend. We used to play together as kids running around causing a ruckus. He remembers playing tanks I remember playing card games and messing about in the barn. We were about the same age as my uncle when he went through his trauma during and immediately after the war. We talked about those times that we spent together even though our recollection is a bit murky.

Dancing stopped and started in time for the next course to be served. One of the courses was a flamed pork roast that looked and tasted really well. There were desserts and coffee as well as a variety of cold cuts. As we talked and ate we toasted the couple with successive rounds of vodka shots. It was all about the vodka shots in those tiny little stemmed shot glasses. There were dozens of such rounds.

My uncle motioned to me that it was almost time to go. He doesn’t drink and also due to the distance that we had to drive we had to make our way back. It’s about an hour and a half to make it back to Kraków from here. The last half an hour was witness to about a half dozen shots in quick succession. It’s a good thing that there was so much food. But even all of that food was no match for all of that vodka. We said our goodbyes to the bride and groom and all of my cousins and friends and drive back to Kraków. It was a bit foggy on the roads but at least the roads were pretty empty except for some guy with a buggy that my uncle saw at the last moment and I pointed him out as he swerved to avoid him. It was a dark road and the guy had no reflective clothing to make him visible. We talked about history and family as we drive back and continued chatting over a cup of tea when we got back before going to bed. 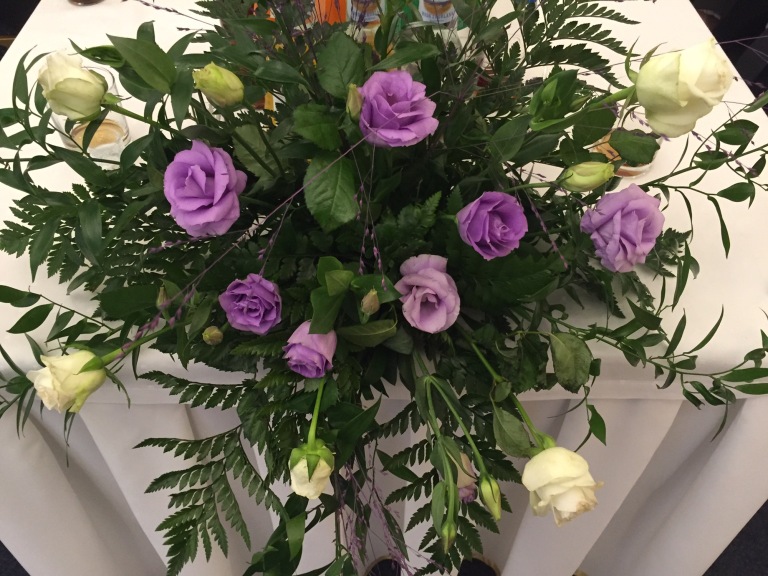