We are off to visit the place where I spent my childhood near where I was born. I’m taking Chrl to meet some of my cousins and some of my aunts and uncles. Although we didn’t tell each other there was a little bit of trepidation within each of us about this phase of our journey. It was only after breakfast that we revealed a little about our feelings.

We cooked ourselves breakfast in the morning. This little room has been laid out really well and it has everything we need. When we first got to this room we dealt with laundry and had the wet clothes strung up all over some trusty string that I always carry with me when traveling. This building has a plaque on the front that said something about the sponsors of this building being metal workers. The room looked like it had custom built metal frames into which all the doors and bed were added. It was really solid with a bright green color scheme on the doors. Simple shapes and patterns adorned the walls giving this space a happy feel.

We watched the news from Italy as reporters talked about the unfolding aftermath of the earthquake there. That earthquake happened after we left Rome and we first heard of it when we had breakfast yesterday. We talked about how your perspective and feeling changes after being somewhere. This event is just the latest in a long line of events that have happened to which I feel more empathy as a result of visiting a place. 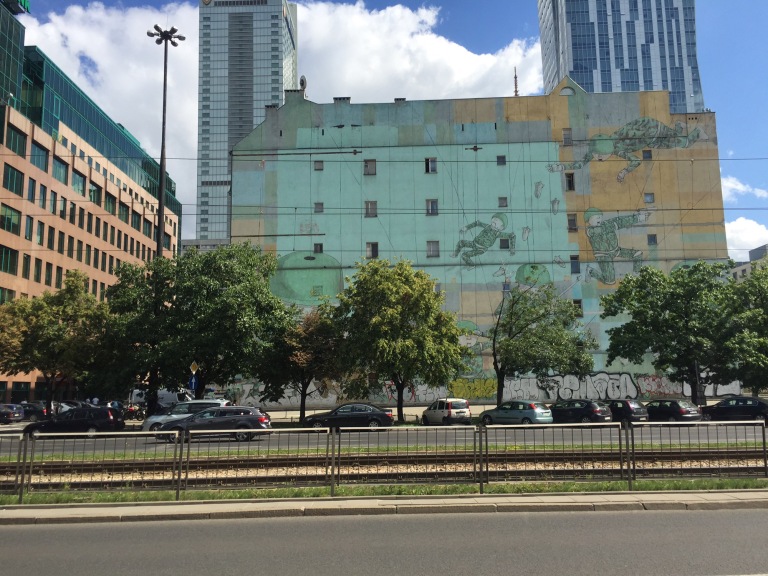 We were all packed and ready to go. After cleaning up we headed out through the old square for the final time. It was just beginning to get busy. The weather has been really nice with the sun reflecting off the eastern facing facades magnifying their colors. We bought one last momento. A picture that will remind us of the time that we spent here and headed off on transit to the station. We alighted at the Central station to catch a connection to the Western station. There was some sort of delay with the trains and we caught a cab there. As the cabbie and I chatted it turns it that we could have cought the train to Kraków from the Central station. When I bough the ticket the day before it appeared that we could only catch it from this western one. That fact notwithstanding the service was delayed by about 45 minutes.

We waited on the platform and as we sat there I had a cigarette. When I was having my second one two burly security guards walked up to me and said. 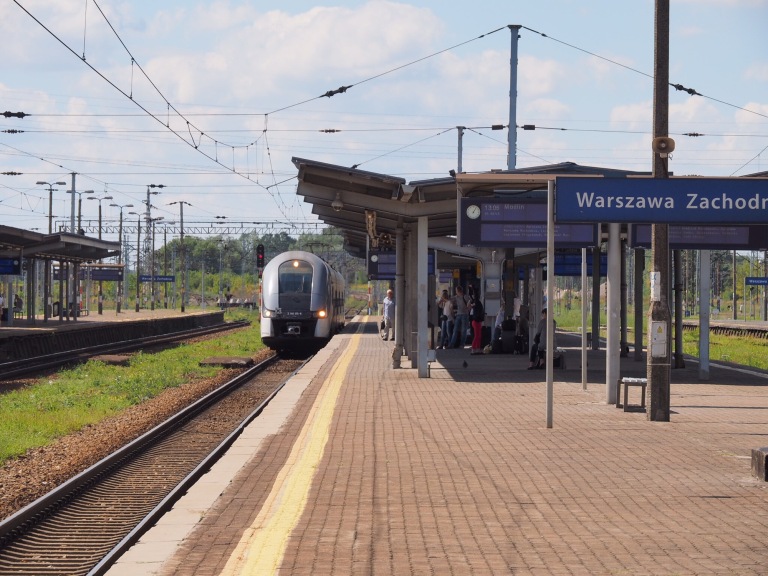 “What do you mean?” I answered in polish trying to ascertain why they were accosting me.

“Do you know that you can’t smoke on the platform?”

“No I did not. I don’t see any signs and there were people around me smoking so I assumed that it was okay.”

“Right there is a sign” and sure enough up in the corner of the triangular roof is a sign. The cigarette circled and crossed in red. It’s easy enough to miss though. Chrl kept sitting as I stood and spoke to these two. There was a bit of adrenaline coursing through my veins.

“What are we supposed to do?”

“Sure.” So I pulled out my Canadian drivers liscence. They looked at it and asked what it is. I struggled to find the right nouns to say what it is.

“Prawo Jazdy” or “the right to drive”

They took down my details and informed me that I was going to get fined. “Did I agree with getting fined and do I accept their fine.”

“What are my options?” I asked.

“Well, if you refuse we will have to ask the police to take you to jail and hold you for up to twenty-four hours until some kind of tesolution was made. Since you are not a national in the sense that you live here we will have to get money from you right now. How much do you have?”

I pulled out a hundred and ninety złoty, all the polish currency that I have.

“I see you have fory złoty there.” I didn’t catch on to them yet. “The fine can be anywhere from fifty to five hundred złoty.”

They were writing out a ticket and I handed them two twenties from my pocket. “I’m glad that you’re giving me a receipt for this.”

Smiling he said “there are cameras everywhere and we will need to report this at the end of our shift. You can treat this as a momento of your time here.”

“Thanks. If it wasn’t for the delay in the service I probably wouldn’t of been in this situation and we would have never met.” 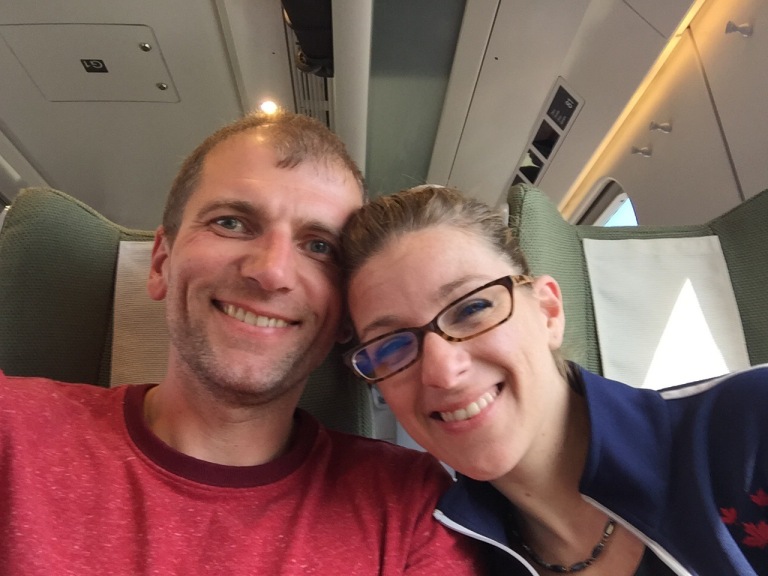 As they finished off their duty the delayed service arrived and we boarded the train to Cracow. It is a new pendolino train that will whisk us to Cracow in about two and a half hours. I’ve wanted to experience the new fast service offered here. The train was new and spacious zooming along accross the countryside. I tried to write but tiredness and unease after the encounter with those security guards prevented me from focusing properly. Before we knew it we were in Cracow and we contacted Madzia who offered to drive us to meet up with my aunt who will then drive us to my cousins. 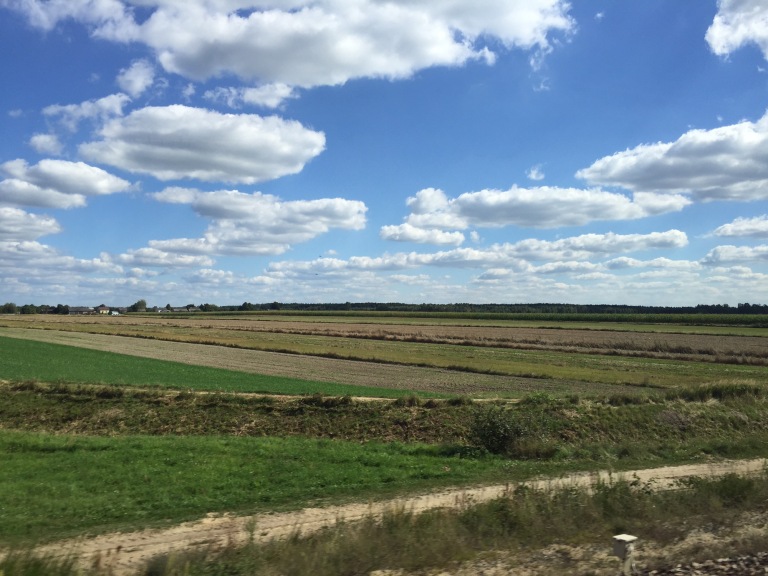 Madzia gave Chrl a nice hug and gave each of us a chocolate wafer bar and some water. We had to find the car now. It was somewhere in this giant parking lot with the sun beating down on us. The station is located below us. Good use of space. As we drove out Madzia mentioned that we are headed into rush hour. We are going to be on the road for the next hour and a half driving out of the city along the twisty back route that I’ve become used to after all these times being here. Some familiar landmarks stand out. Buildings that have aged each time I’ve come here. I don’t ever recall being here in late August though. The fields look different. The city turned into countryside and sometimes forest. The colorful houses lining the road as we passed through different towns and villages excited the eyes as we passed them along our journey. 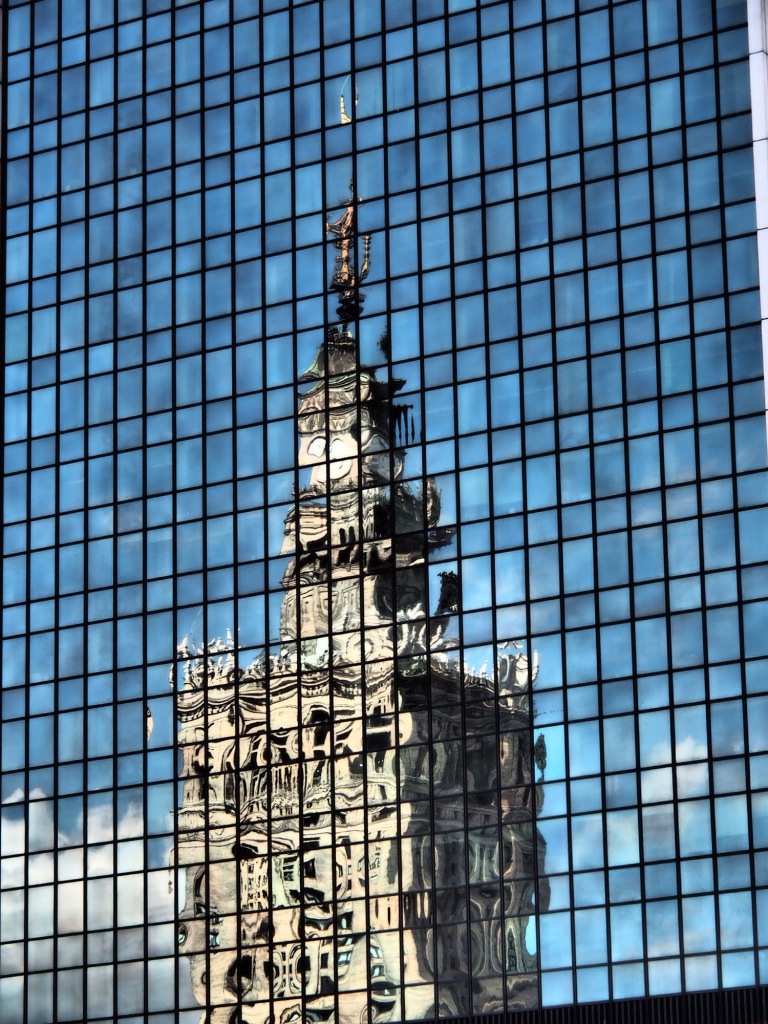 Madzia thankfully knows some English. We managed to have a conversation amongst ourselves during this ride. We were headed to a restaurant that I’ve never been to before but one whose development I’ve watched over the years.  We drove by Aushwitz on our way to the restaurant to give Chrl a glimpse at least of this place. 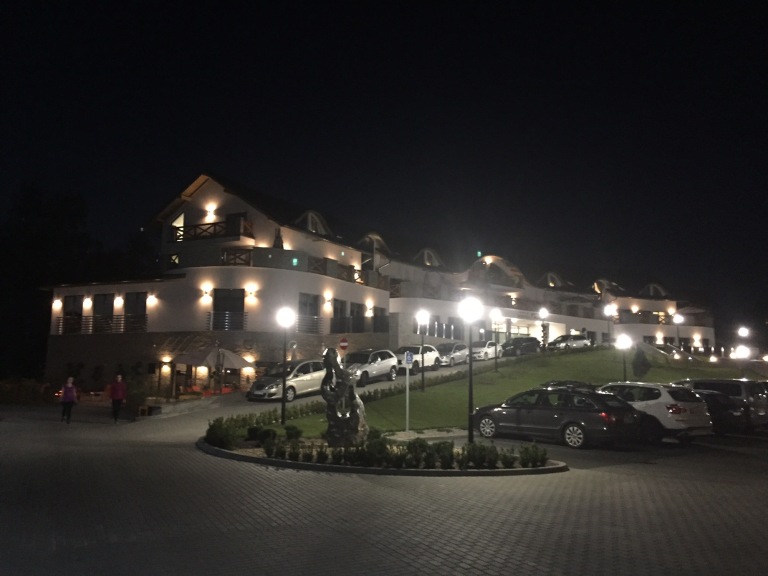 Bonia, my aunt was walking along the side of the road in the parking lot as we pulled in. This restaurant parking lot was packed. There is a large man made pond in front of it that people were enjoying. This place is a kind of retreat in the middle of many villages and townships for people to escape to and enjoy some time relaxing and frolicking in the water. Large floatie swans bobbed up an down moored to the dock. We found a parking spot and got out and ciocia Bonia walked up to greet us so that we could all walk in together. She gave me a customary hug and kiss and then gave Chrl a big hug and three kisses on the cheeks as is customary here in Poland. We had a reservation inside and still had to wait for my cousin Ania to get here. 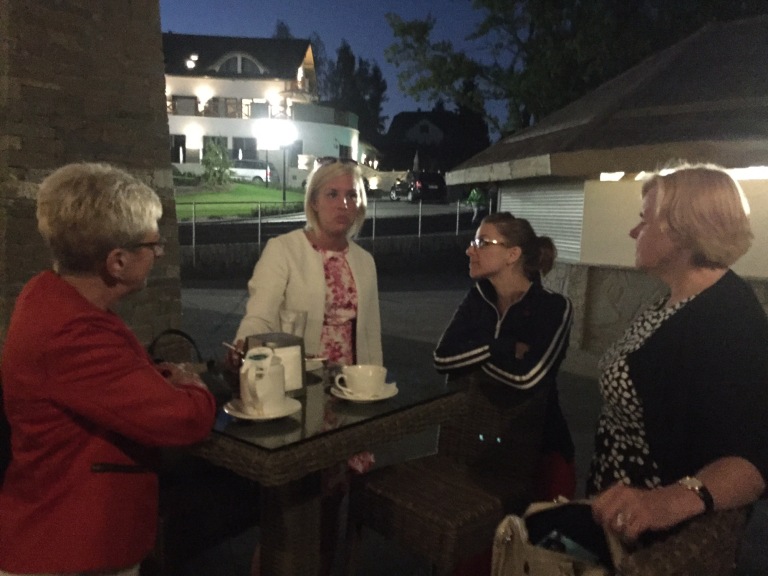 We sat down and got the menus one in English for Chrl and proceeded to pick out our meal. I am filling in a translating role in order to make sure Chrl doesn’t feel out of place just sitting there as everyone else talks in polish. They wanted to know a bit about her and her impressions of Poland so far. We talked about our plan for the next few days. We are going to be driven to another cousins of mine to sleep tonight and then on Saturday early in the morning we will be driven back to Bonia’s from where we will be going to Cracow for a quick walk around. My feeling is that Chrl has to see that city as it was undamaged during the war and the sense of its historical importance is apparent. It is also a very beautiful city especially those parts that have been restored from the ravages of time.

Ania showed up just as we finished ordering our food and we continued our conversations. Ania is able to speak English as well so that took some pressure off of me to translate. With all these English speakers it was Bronia that felt out of place unable to follow some of our conversations. I just sat and translated kind of automatically. We finished and all went out for some fresh air. It was time soon to go to Joasia’s. We moved our luggage from Madzia’s car into Bonia’s car and drove to Joasia’s.

Joasia doesn’t live far from here. At this point it was dark and Bonia needed some help navigating the dark country roads. I had the oracle help guide us although I kind of knew which way to go. We soon pulled in to Joasia’s and were warmly welcomed by everyone inside. Joasia was there with Konrad and his girlfriend as well as her other son Seweryn. They were kind of waiting for us but we were on time arriving at nine in the evening. Joasia’s been busy it’s Dożynki time in the village.

Dożynki are an annual harvest festival something like thanksgiving in North America where villages celebrate the harvest. This year Gierałtowice the village my mom hails from is hosting the festival. It rotates between the six different local counties or Gminy in the area. Because of that and due to Joasia working at the local cultural centre she is quite busy. Nine was a time that she estimated that she would be home.

Chrl was greeted with hugs and kisses from everyone. I could see ease washing over her face having been a bit anxious about meeting my family. It is a bit of a step on both of our parts but I know my family and I know how gracious they are. We were directed to the living room and invited to sit down for another meal. Klaudia made sushi along with other traditional cold cuts and bread, as well as cakes and assorted other finger food. We sat around eating and getting to know each other.

It was the first time I’ve heard my younger second cousins speaking English. Klaudia spoke really well and so did Konrad. Seweryn who is usually quite eloquent in Polish didn’t have the vocabulary to express himself the way he wanted to. It’s good practice for him. I’m glad they are learning to speak it. It made hanging out together that much easier. I didn’t have to translate every single thing by myself. When I did have to the translation came easily but as time progressed some words were harder to access. Tiredness began to set in. It was a long day and our hosts noticed that. We were honored to sleep in the master bedroom that came with the accompanying balcony.