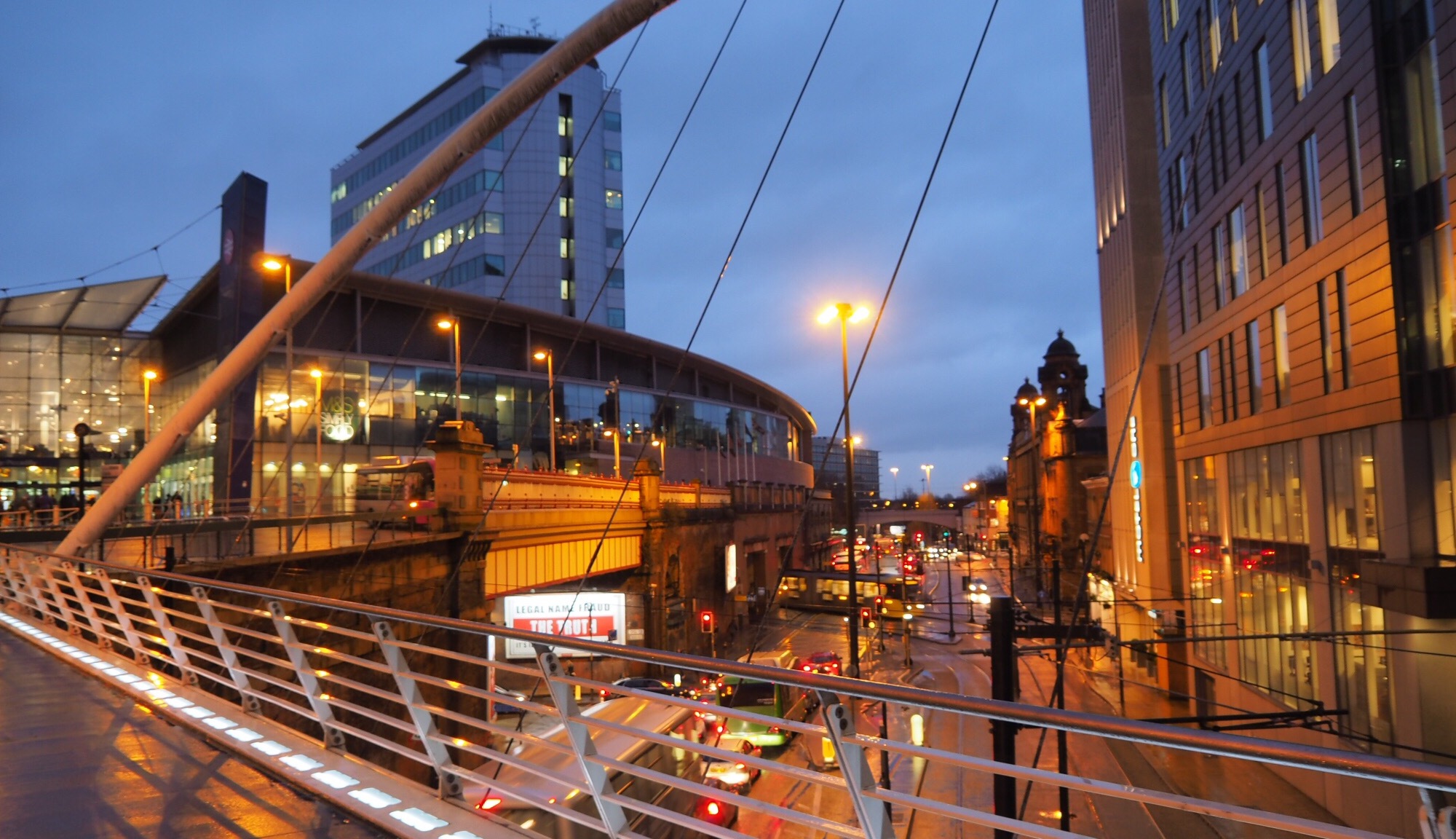 Sitting on a train in my way to Manchester to have a pint with a mate. It seems like precisely the perfect thing to do to celebrate. Today’s been a strange one because of the snow. There was a tension through the populace because everyone is rubbish at driving through it. Or so I’m told. I’m actually downplaying the degree of a disaster that this area becomes.

A few days ago I scrolled to the first post I’ve ever done and made note of the date it was published. That was 366 days ago today last year. So much has happened since then. This was originally intended to be a travel journal but it has morphed into something else. It’s more than just travel it’s also about the experiences and how they have shaped my life. I’m conscious of all the lives I’ve encountered. Grateful for them as some have been life altering. 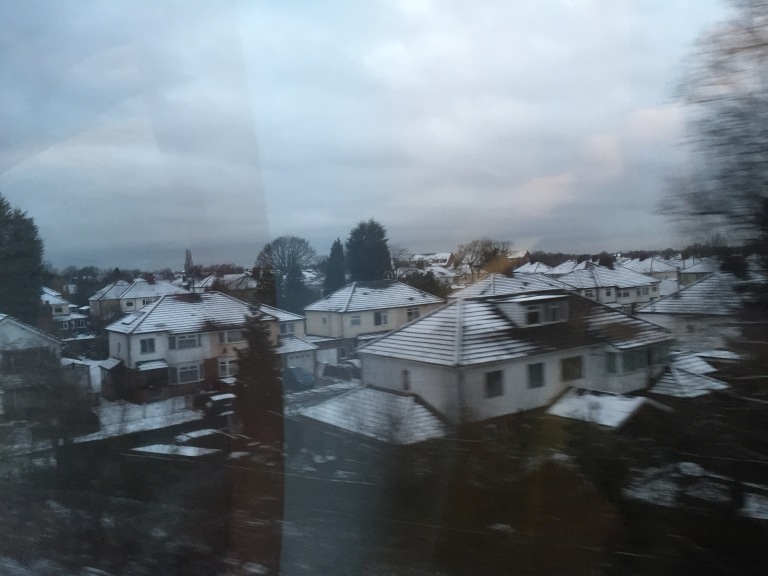 There is snow on the ground on the way north to Manchester. The grazing sheep with their poor camouflage stand out prominently along the hillside. The train is packed and I’ve lost my train of thought as I edited the previous paragraph. Looking back at it it still isn’t right.

Stockport is covered in snow. A light dusting anyway. Darkness is beginning to descend over the island. There may be twenty minutes to go to make it to my destination. When I think about it much of this blog has been written like this. Sitting on some form of public transportation tapping away at the screen fitting in with the rest of the populace interacting with technology.

When I left on my journey last year I kind of knew I was coming back but I wasn’t expecting to be needing to leave again when I got back. It seems like I can’t make up my mind but it’s more about being stubborn and following some strange intuition. The answer to what is right is a difficult one to put into words. Often recognition of what is wrong is easier. It helps to establish boundaries. 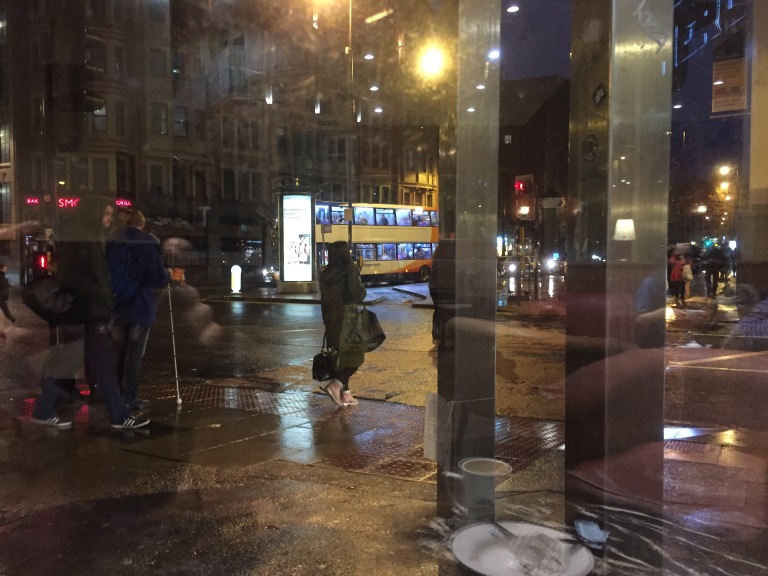 At a coffee shop near the station. Often times a seat this close to the window is taken. Everything is delayed due to things that come up. My train was late and with the way that the traffic is moving it will be a while before we have that pint. Rush hour is still in effect.

Leaving Manchester now in a bit of a merry mood. I had a few pints with one of Bernie’s mates. He had been worried about me being up North over here without anyone to just sit and talk to. We met before last year at the Underworld show. That was a crazy night as far as I can remember. It was good to see a ‘band’ whose music had a profound effect on me. ‘Dubnobasswithmyhead’ I can still hear it’s sound and rhythm. I may even play that album when I get back to my flat. 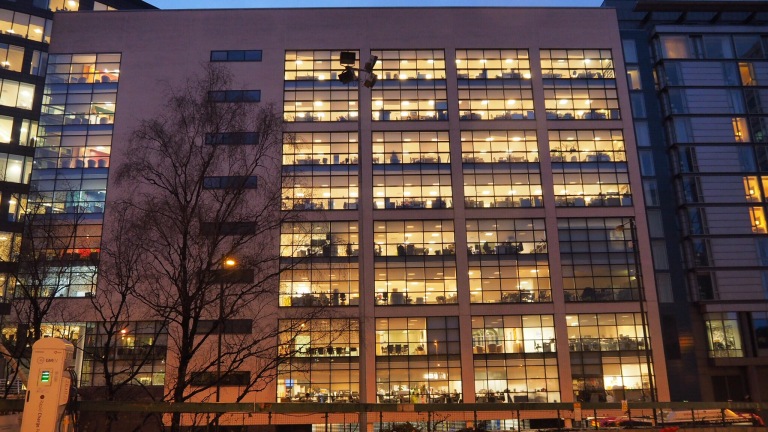 It’s been a year since I began to document my life in digital form. Since then I’ve become better at expressing myself and better at looking at the world around me. This world is the same world you occupy. It’s the same world you see just with your own perspective and with your own set of eyes. You may have been fortunate to find success or may still be struggling to find your way. I’ve struggled and succeeded partially all in this year but it’s because of a lifetime of experiences, trials and tribulations that I find myself here on this train back to Stafford. 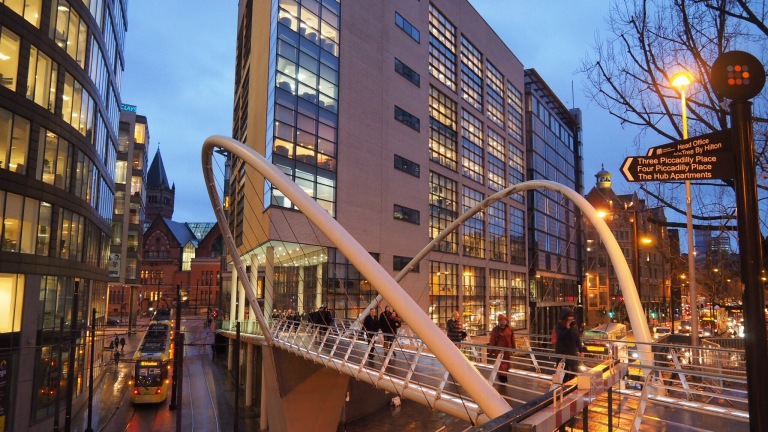 It’s been a year of looking at the world and traversing it. I completed a circle around it within a year. I’ve tried to maintain a minimalism in my existence. My possessions are meager but I know what I need in order to survive and most importantly thrive. I’ve even thought about how I can cut down on the stuff I brought with me now.

A year, do you remember where you were last year? Do you remember what you were up to and what you hoped would happen? There are only a few hopes that I have and there are many dreams that I’ve held onto for a lifetime. Slowly they are coming into realization. What has been amazing in the past year is that it’s been unlike any other time before. There have been a few times when I’ve come up for air but the rest of the time it’s been hard to keep track of all the things that have happened to me.

It’s all come down to one suitcase the same suitcase that I had when I first left for these European shores. Since then I’ve acquired more but then let go of it all over again. There isn’t going to be a great re-aquisition of things as a different mindset had set in. The “less-is-more” mentality has become my mantra. I know I’m not the only one following that mantra not only because of necessity but also because of desire. There has been a vulgarity of over consumption for far too long. Disposable materials litter our world.

It was a good chat and it was a good way to celebrate one year. There are subcultures within every society that bring people together. These comonalities expose us to the wider world in ways we cannot imagine but also expect because of our experience.

I’d like to thank all of you who have read this blog. Kind Regards!

One thought on “First Anniversary, A Life Out of One Suitcase”