It’s the start of yet another entry into my CV. Getting there is going to prove to be a bit of a challenge strategically as I examined the schedule. I thought that my accommodation was close to the hospital that I’d be working at. Closer examination of the addresses provided to me showed otherwise. There will still have to be some travel that is needed. A slight oversight but the place I’m staying at has a bed and sheets as well as a kitchen stocked with all the necessities that I need.

The day before I timed my walk to the station and I can get there in twenty walking at a brisk pace. The weather was going to be terrible but at this time in the morning the rain still hadn’t started yet. I made my way and got to the station purchasing my ticket in time for the train. The train station has plenty of activity at this time of the morning. Many are waiting for their trains and many are going south to London I presume.

The train arrived on time and I picked out my final route to the hospital. I’m going to have to take the bus. It’s just a bit too far to walk and make it there on time. I don’t want to be too late. Whenever I go to a new place the senses are heightened as my mind processes the environment for clues as to the correctness of my travel towards my destination. This travel will in time become routine.

I got to the hospital with a few minutes to spare. Just long enough to get me a sandwitch and a coffee. I know how it works here. There is no coffee break just a thirty minute lunch sometime during the day. I need to focus on the people that I’ll be working with and the instructions that I’ll be getting from them. I don’t anticipate any difficulties.

The department is located on the lower level of the hospital within the X-Ray department. The hospital itself is a new building with a huge entrance atrium that is painted white reflecting all the available light entering through the glass wall. There is plenty of activity here as people are rushing about trying to get to their appointments or places of work. The cafeteria is on the second floor.

The Nuc Med department is deep within the bowels of the X-Ray department. We don’t really have anything to do with them other than using their door to enter. Whenever I start a new job it is hard to tell what kind of an experience it is going to be. How are the people going to receive me? How am I going to fit in? Will I like it there? The wifi and cellular network wasn’t working down her as I tried to bring up the name of the supervisor that I was supposed to report to. I had a vague idea since it’s the same last name as one of my other supervisors at another department except that in this case she is female. It turns out that she is on annual leave and someone else will be showing me around. The induction process got passed down to another member of staff and she got on to the task of introducing me to the other members of staff and the department itself. The place is huge and the rooms have a generous size. All the equipment is fairly new except for an olde ECam that is still puttering along with the Gadolinium wings intact and in use.

The staff consists of mostly female techs some of whom are studying to become fully competent in this line of work. There are others I was told who are in the PET/CT department somewhere else in the building. The techs rotate through the two departments as well as the hot lab or ‘radiopharmacy’ as they like to call it here. I got the sense like they kind of need someone with my skill set. I had to put down money for a deposit and will be responsible for a minimum of one month’s of rent. It is better than the alternative trying to do the same in London where the rent is at least double as is the damage deposit and the other associated costs.

Nuc Med is one of those areas in the hospital and in health care that is kind of obscure yet vitally important for answering a certain number of questions. A wide variety of people work in this field and due to the length of acquisition times a lot of chatter happens between those working in a department. Thus, it is vitally important that the people with whom one is working are compatible with your personality and are kind of likeable. There are many here that are likeable others I don’t yet have an opinion of. The ladies apologised for a topic that they have been discussing. I forget what it was about but it had to do with one of them having some kind of relationship woe or a lack thereof. I can see us having banterous conversations as she has a cheeky attitude. One told me a story about her previous work and the reason why she ended up in nuc med. Changes in the way social care is administered meant that what was once an enjoyable job became something entirely different from what it once was. There is an offloading of work from one department to another as those in need of help are pushed to places that are unable to cope with their behaviour. They were pushed to an area where they didn’t really belong and thus those in that field are stressed and burnt out. 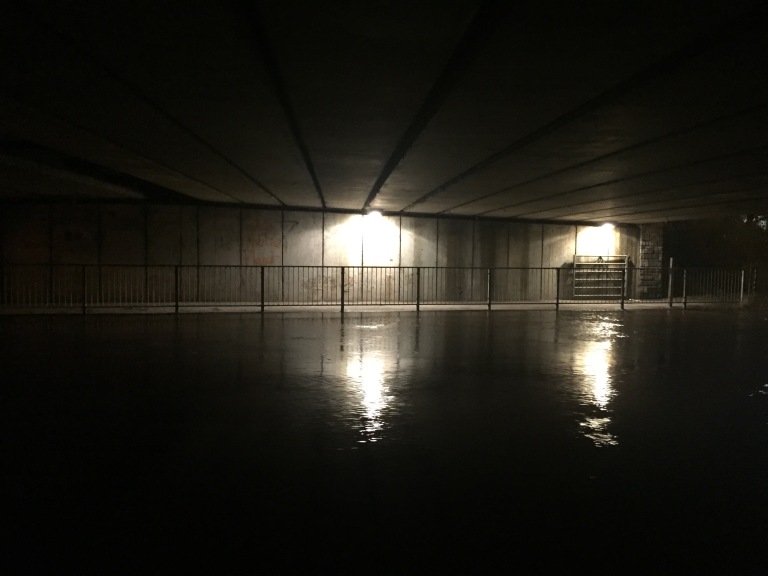 The energy needed for all this socialising and learning sapped my energy after a while. More sleep was needed and sadly at the end of my day I didn’t get enough. After getting back to Stafford I got slightly lost as routes that would have been normally open were cut off by construction. I essentially had to double back in order to cross the river Sow. This river runs through the heart of the city and it is like a stream that has recently swelled because of all the rain that has fallen lately. walking under the motorway in search of a safe crossing I was surprised at how high it reached. I needed to reach one of the super shops to get a few things that I needed. It was a harder journey than expected because of the pedestrian diversions in place here. The super shop had most of the things that I need and their prices were within reason of what I was willing to pay. 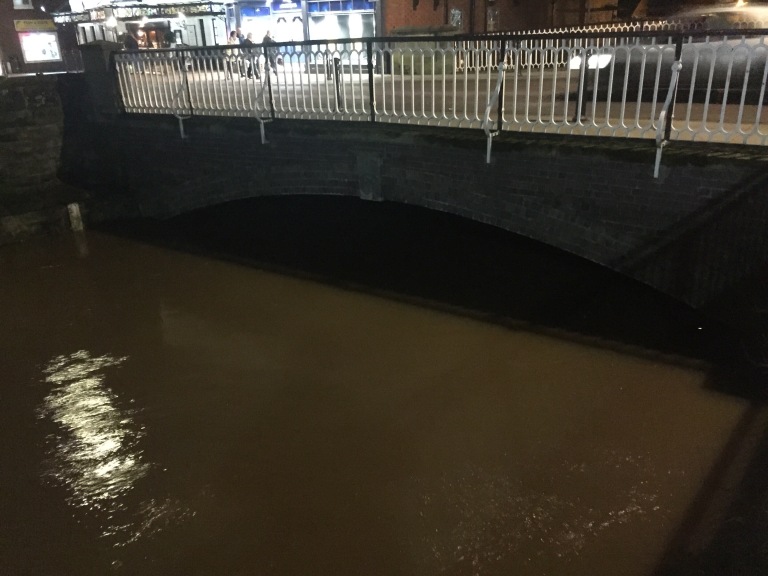 It was time for Video chats. I spoke with Barbs for a while. I miss her. I think this is the feeling that I’ve had lately. My behaviour has changed I think to the point where my eye even if it wonders as it catches a glimpse of some fashionista on the train that it is her that I miss. It has changed the way I want to structure my life in the coming months so that the frugality shortens my stay abroad. I want to get back and it’s only been a week. I know however that rationally I need to do what I am doing here for me and for us for the long term. I know noticed how we fit together and within the family structure that I have back in Vancouver. Am I deluding myself in these thoughts? If my intuition and my mind are in line what does that mean? It means that I have to pursue the hope and dream that revolves around this person who for now hasn’t been revealed but is the worst kept secret on the internet. I know what this story is going to be about. What this journey is going to be and what my destination is.

We spoke for a long time and I wrote about my journey again and again running into problems for whatever reason. Part of it is carelessness and part of it is technical errors. Needless to say I didn’t get good sleep. It was a restless night and it was an early rise since the way that the schedule operates here mandated my early wake up. I don’t want to miss that train. When I got there in the morning the station was buzzing with people eager to get on the train for their commute out of this sleepy town. I along with other members of the public waited my turn to get on the train and commute to my workplace. A new pattern is slowly forming that will be the culmination of other patterns formed before revolving around commuting between one place and another. There was no storm in the sky this morning just some winds and a chill that is always associated with it. I am happy with my jacket for keeping me warm. 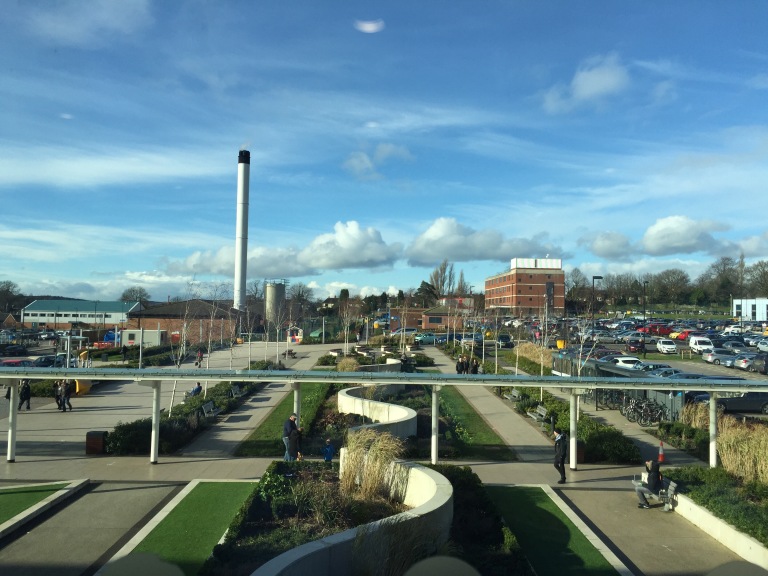 The work day went better today. There was more for me to do and I jumped in and ran one of the camera’s for a while watching one of the acquisitions take shape. They operate the double check procedure to minimise errors and wrong patient injections. It looks like this has become standard policy in the NHS. There was one too many errors that occurred and this is the result. This is why there are so many techs that work here as well as the need to have people train to be nuc med techs. The job becomes relatively simple with all the bodies swarming around a patient. It is also the reason why sometimes it looks like people are sitting around doing nothing chatting. Hence the importance of enjoying the company of the people that you work with. I am one of those that can be cheeky at work in a nice way of course in order to bring some levity to the situation and day. For some reason though they left me alone on one of the cameras. Maybe they trust me or maybe they just wanted to see how I’ll perform. As I left at the end of the day one of the housekeeping staff told me to have a good day “duck”. Finally someone said that to me. This is a term that is specific to this area and as Bernie and I spoke later on we got a bunch of good laughs from it. I was going to call him and tell him about it after I finished supper but he preempted my call by calling first.

It is time to call this a day and prepare for tomorrow.