We played a last game of cards and said our goodbyes. Each hug harder than the last. With a bit of sadness and the pack strapped to my back I walked out into the street not wanting to look back. The road ahead was to the station and then to another hotel. I booked it way back in the day so that I could get the visa sorted.

The station wasn’t far but it wasn’t close either. I had made the trek earlier in the day for some coffee. I was supposed to have a job interview in the morning so I was up and ready to go but with the time difference things got a bit messed up and it’s actually tomorrow but today over there. You know what I mean?

I packed up all my stuff but it was too early to go. I uploaded all the pictures despite the VPN being down.  Somehow these things didn’t work before and they do now. Don’t ask me to explain it it’s a matter beyond my control or comprehension. Maybe someone is looking down fondly on what I’ve got to say. 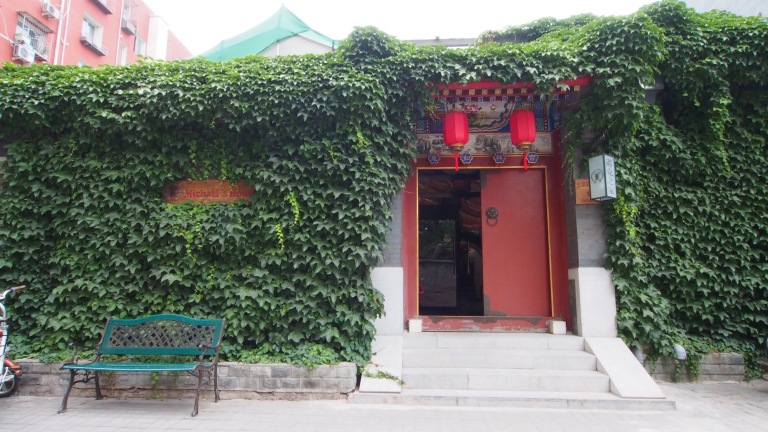 When I transferred to the other line I made the mistake of going the wrong way on the circular line. I quickly realized my mistake by the flashing light indicating the next stop. The solution is simple enough. What was harder to do is finding the hotel. Google maps that I saved as an offline map had it in two different places. Adding to the confusion is precisely where to enter. So I walked around with all the weight strapped to my body a with the heat and frustration well I got kinda sweaty. Eventually though I made my way to some hotel and asked for directions. The receptionist didn’t really speak any English but she called the hotel. Then a guy who was checking out offered to help me find it. I had to wait for a bit as he was checking out but then we set off. The hotel was close to where I first looked but I approached it from a different street the first time. Thanks to the guys help he asked some locals where it is. We walked right past it. The front is covered in leaves. I thanked him and wished him well. It was nice of him to help me in this way. He was rolling his suitcase along with me. He was headed home to see his wife and kids. He has a ten year old daughter and a newborn son. 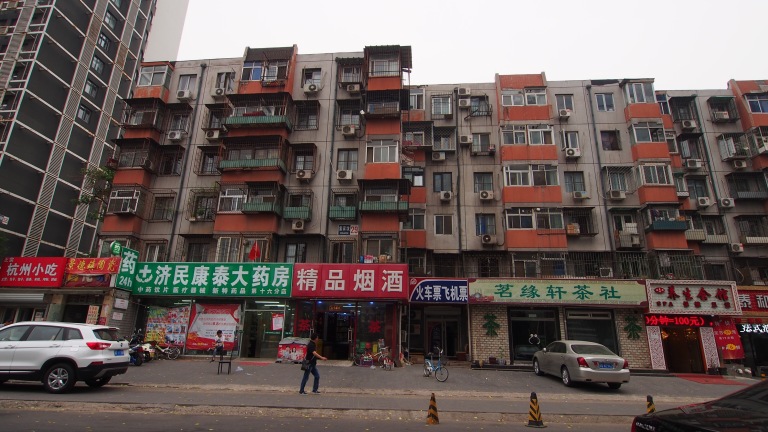 As I walked into the hotel I was blown away. It is really nice. The middle courtyard is covered by a glass ceiling with red drapes, fans and air conditioning keeping it cool. There are many TripAdvisor reward plaques on the wall. The welcome was really good and the receptionist said that she waited for me on the corner but I took my time getting there.

I cleaned myself up and had a beer before heading out. I decided to visit the lakes that are close to the Forbidden City. First though I was going to have a coffee and just relax for a bit.

Having relaxed outside on the patio I navigated my way to the area. I took a random route going down streets that I felt were interesting as I approached them. Some proved to be interesting while others did not. I passed by the canal and observed with shock someone swimming there. As I walked along further it was clear to me that this was done regularly from a particular spot in the canal. People even fished there.

I continued on marveling at what was around me somewhat. I eventually came to a spot where the map told me that I could cut close to the lake. Unbeknownst to me I entered old Beijing. The architecture here had low slung buildings close together and further along it had the preserved buildings of palaces, temples and an old university.  I liked the feel of the place and soon I reached the lakes edge and proceeded to walk around it. 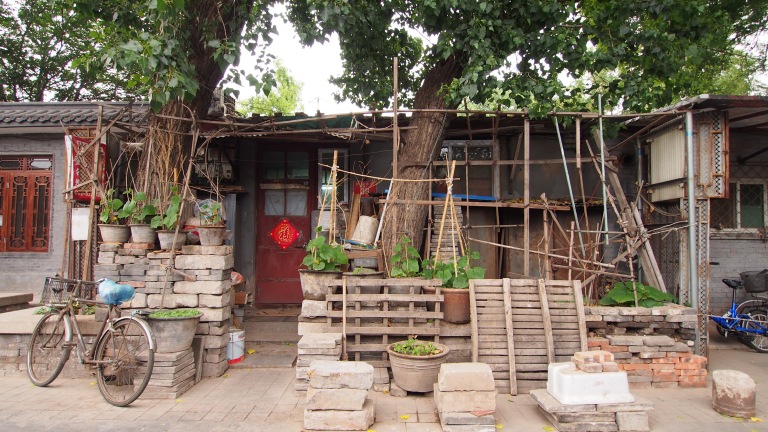 The whole perimeter of the lake is lined with bars and restaurants as well as some shops and historical buildings. The place was full of people strolling some of them were families but many were young people in groups and as couples enjoying the scenery. It is a nice oasis from the hustle and bustle of the city.

I sat at a little bar and had a cold beer from the vast selection they had on offer. I ended up picking one of the local beers because of the price. I watched as people strolled by occasionally straining my neck at someone particularly interesting. I felt at peace and thought that this place would have been nice to enjoy as a group for longer. My impression of Beijing started to change. I actually quite enjoy this city and I’m glad I had this extra day to spend here. I don’t know if I would have made it here if I didn’t move my location. 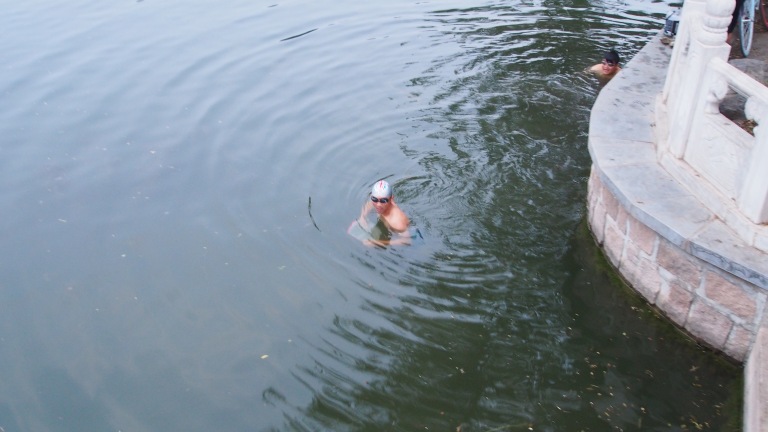 It was getting dark so I continued on and reached the spot where we had a beer a few days ago. In the night this place comes alive with neon lights and I spent some time waiting and experimenting with exposure to get some interesting effects. I still had a ways to go to make it back to my hotel so I kept going. 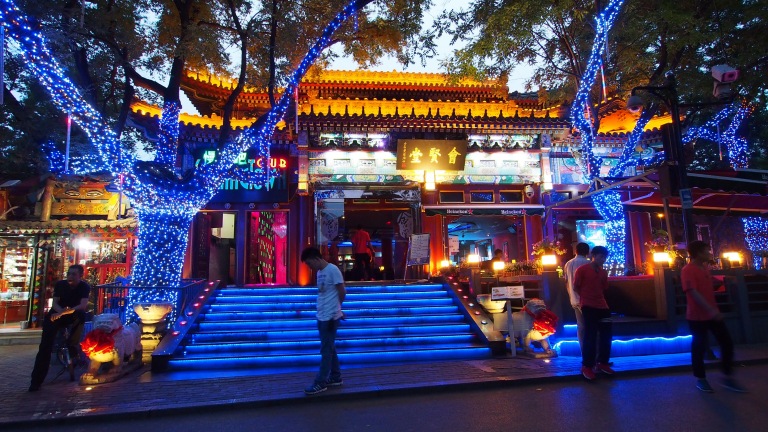 Things catch my eye like the people dancing in the park by the riverside or the little stall with interesting souvenirs. There are many here and some are more interesting than others. I kept going on passing over the freeway and then walking by the Llama Temple where I heard more music this time from a full on folk band or maybe they were just locals playing their tunes. It had a great rhythm to it and the old ladies interpretive dance was quite amusing to watch. There was a man there trying to fly a kite with lights flashing a pattern. He had a hard time getting it up as the wind was kind of weak. 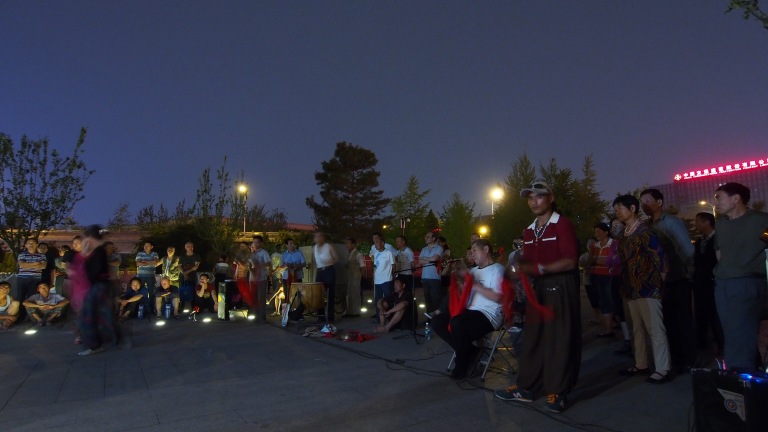 The courtyard by the Llama Temple was surrounded on all sides by freeways but eventually I found a way out through the underpass. Then it was a straight line and a right then a left and there I was on the corner close to the hotel. I decided to have some food before entering the hotel. I ate at one of the sidewalk restaurants and had some noodles. It was exactly what I needed and thanks to the Waygo app I knew exactly what to order and what I was getting. It’s so handy and well worth the price I paid for it.

Now I’m back at the hotel and will soon pas out. I still have to have that interview tomorrow and then it’s off to the airport and flying to Seoul.