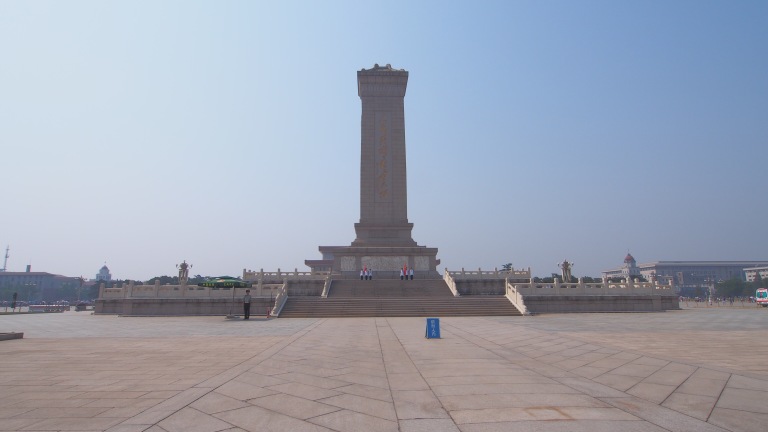 Today was a long day. Not much more that could be added to that. It started off with a search for coffee and then continued on as we walked the width and breadth of the former emperors palace. The size of these areas is huge and the day was hot with the sun hazily burning itself into our flesh as we traversed the areas. 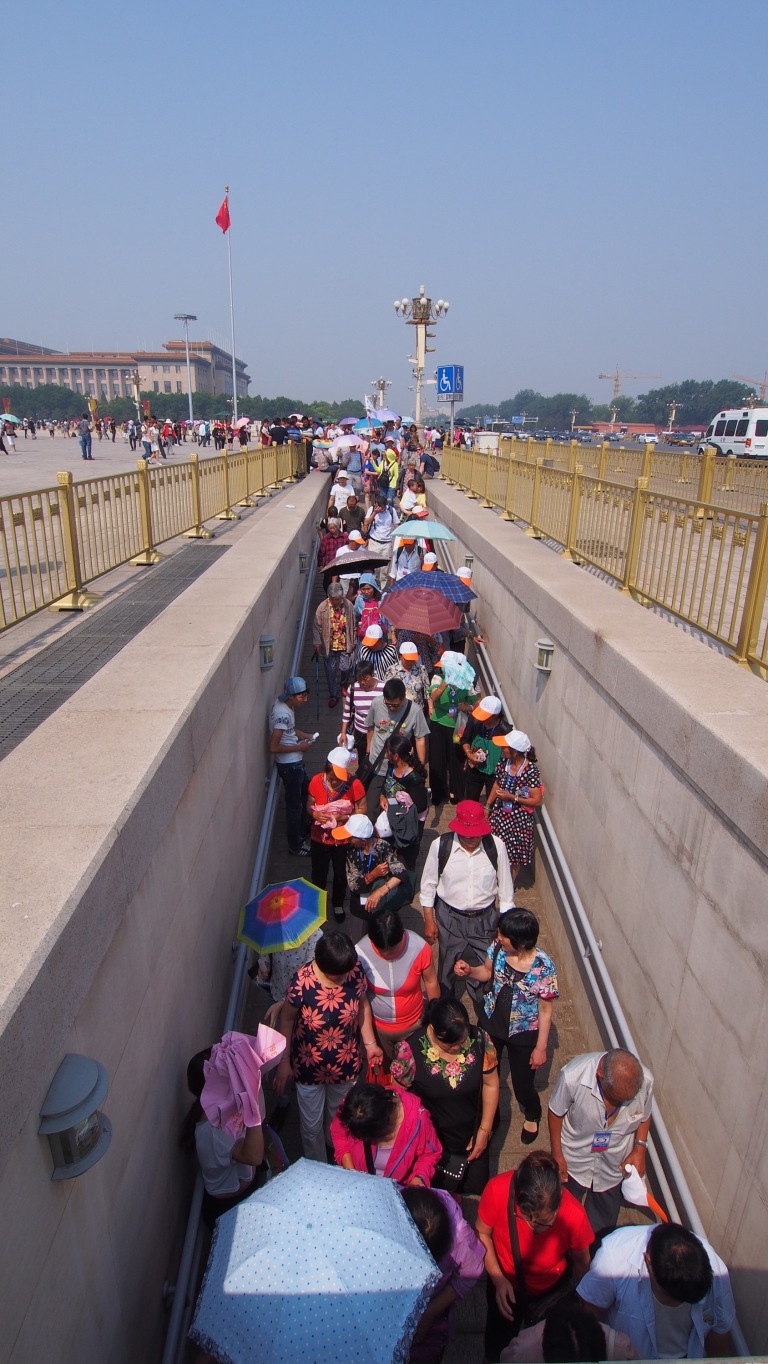 In the morning we gathered to start off first in Tianamen Square. This is the largest public square in the world capable of holding four hundred thousand people. We passed through a security check as we entered. People were searched for a variety of things and us being tourists escaped the harsh scrutiny that was reserved for some. The square holds high significance in China and is treated with much reverence by many.

The few monuments served as an emblem of the people. There is a mosuleum holding Mao’s body that had a two hour queue. We skipped this part as the scrutiny to enter there was also too harsh. Nothing was allowed besides the clothes on your body.

We spent about thirty minutes walking around the square and then we were goon to go to the Forbidden City. The name stems from the fact that no one that wasn’t invited was allowed to enter these grounds. It was the exclusive domain of the emperor and all the state functions and decisions were made there. The grounds held the emperors harem of three thousand concubines and he was served by a multitude of eunochs. The scale of he place is truly large. The grounds are about one point one kilometers in length and about seven hundred meters in width. They are surrounded by a fifty meter moat that was filled with venomous snakes and crocodiles and then there is the wall. 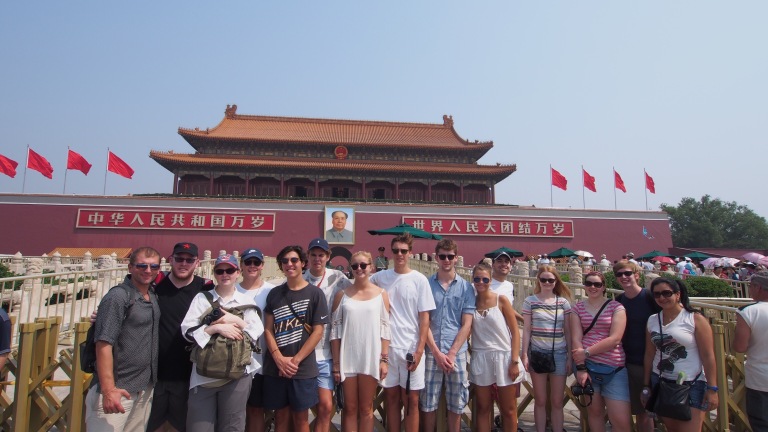 The main enterance now has a picture of Mao in front and if is the picture that is often flashed on television. We entered the premises and purchased our tickets and proceeded to get searched again. This place was crawling with tourists and security to keep everyone in check. We got a run down from Harvey as to what we were going to see and the scale of the adventure through this place dawned on us. 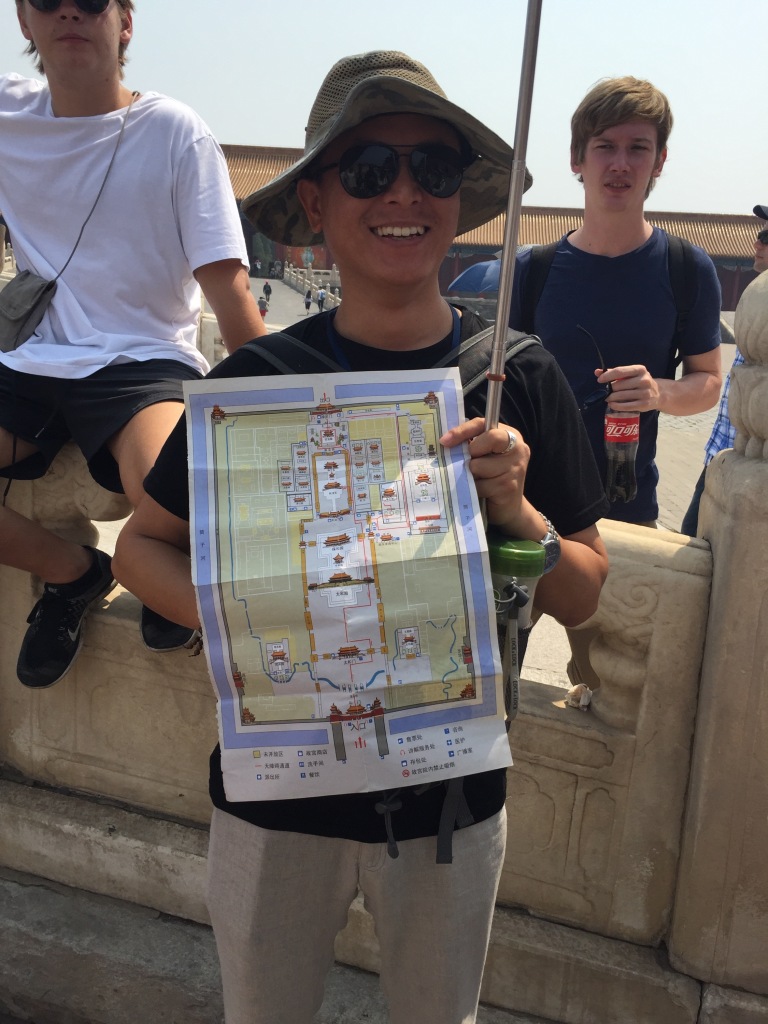 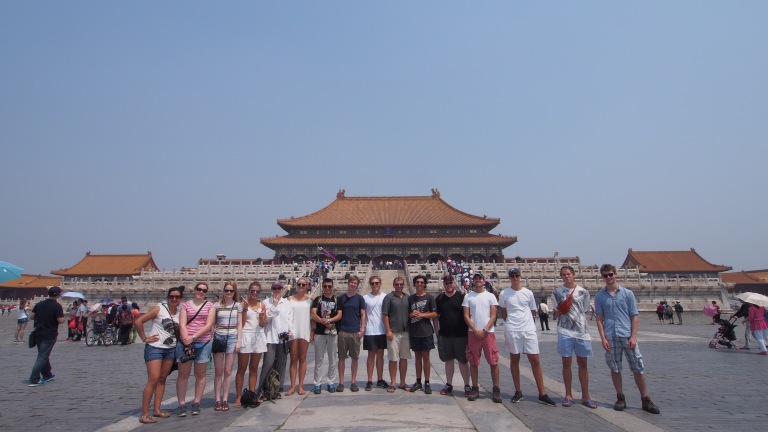 We proceeded through the gate and explored as best as we could the first building before continuing on toward the second building. This building served as the nexus of power where the emperor met with his generals and advisors to make decisions regarding the running of the country.

We continued on reaching the emperors office and library which at one time housed many books. These are now found in Taiwan. The tour continued on towards the bedroom which was a whole building in and of itself. The concubines were brought here by the eunochs having been bathed in scented water and wrapped ready for the emperors pleasure. They were brought through a door on the side and had two hours in which to make an impression. There was a time limit to this pleasure in order to keep the emperor focussed on the empire and not be feelings of love or perhaps manipulation.
As we moved further towards the northern gate the buildings got smaller but no less intricate. These chambers were made famous by the story of the last emperor who was held here in the Forbidden City after being deposed from power. The place probably wast the same after that. The garden was really nice and a fitting end to the tour of this place. We traversed the length of it admiring the scope of this place. 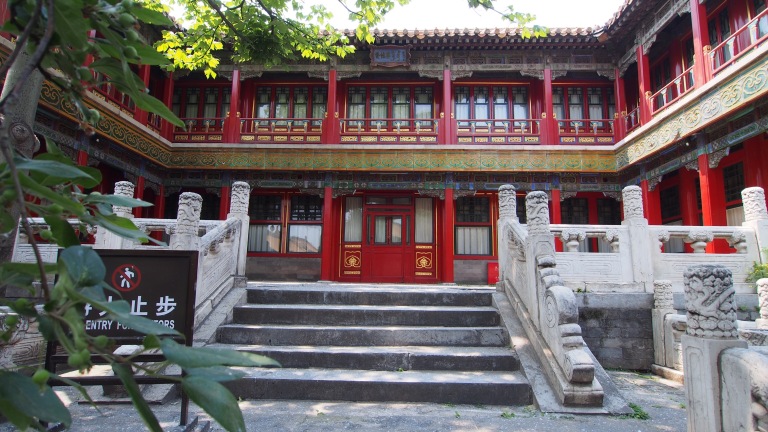 Hunger was starting to set in and we made our way on the bus toward the bed stop where we could eat. We had food at some restaurant some of us sharing our meals together to gain some variety of food into our stomachs. Some went off on a rickshaw tour while some of us opted to sit by the lake and have a drink on a rooftop patio of one of the bars here. The time passed quickly and it was soon time to meetup so that we could go to our next destination the Summer Palace.
The journey to this place was quite long with a few transfers. We got separated at one point as we were told to go to the wrong station. We were rushing to get onto the train but some of the group didn’t make it. It was kind of funny afterwards but at the time a bit worrisome. We did what all groups or people should do wait until we made contact in the last known place. Eventually though we all got back together and continued on to the station. 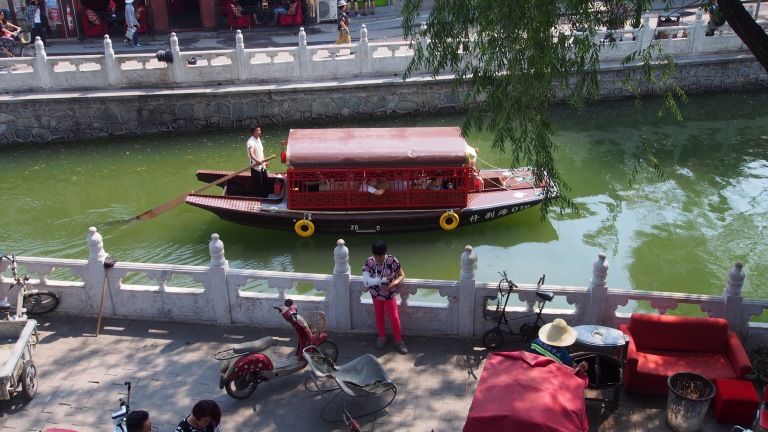 We got our tickets just before the ticket place closed and walked into the palace grounds. The palace itself is built in a Tibetan style on a man made mountain overlooking a man made lake. The steep slope and the rocky terrain gave it a different atmosphere from the forbidden city.

The palace had more of an organic feel to it. The pathways built into it were curvy and at one point with the various forks in the paths I became separated from the group. Eventually though I did find them.

The serenity that we found in this beautiful place could have been due to the lack of tourists there. We had the place almost to ourselves as we climbed up and then down to towards the exit. We talked as we have always done throughout th journey about the history and other subjects that came up. It was a good way to end the day. The palace is a bit far out of the city and we prepared to travel back to the hotel. It took about an hour to make it back.

Once back I had to get into my room but my roommate still hadn’t returned from the excursion. I eventually got the cleaning lady to let me in. This hotel also doesn’t have the best facilities so I’ve been dealing with plumbing problems as well as a dodgy washing machine. My clothes are no hanging from a macguyvered line. Quite proud of it actually. Tomorrow is an early start for the climax of our trip the Great Wall of China.