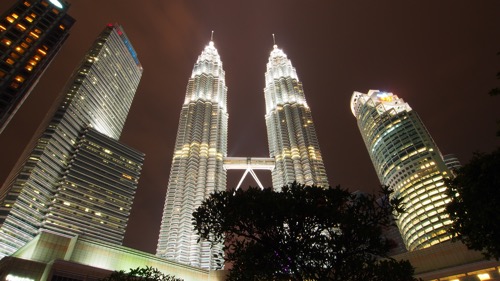 0644
On the metro traveling towards the train station that will allow me to pass passport control and get onto the train to Kuala Lumpur. It’s quite early and the first line that I was on was packed. The dreaded transfer was eased by the line I needed to get on being on the other side of the platform. How convenient and it was going in the right direction! Twelve more stops at this point. I hope the rest of this journey is as smooth. 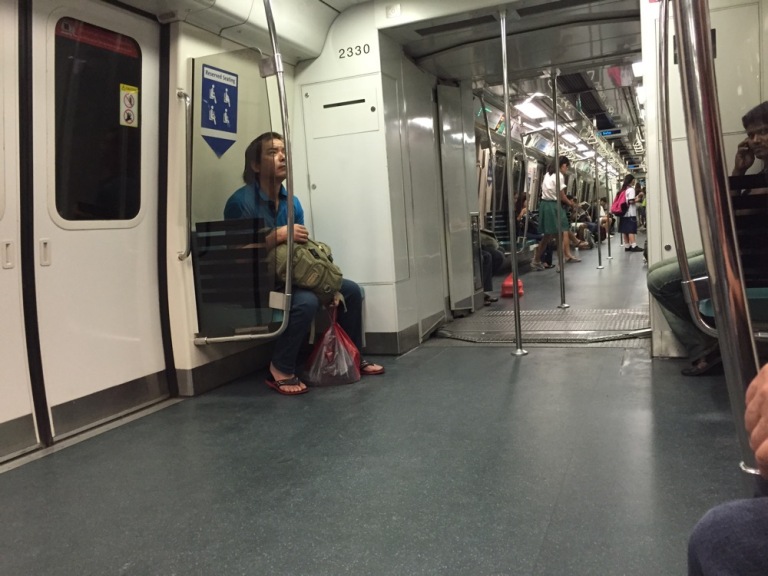 0911
I jinxed myself and missed the train. In Singapore I had to find the right bus to take me to the border crossing. I asked around and found it alright the trouble was that when I got to the border passport control things slowed down. Then when I tried to get on another bus I was told it wasn’t the right one. I asked one of the border guards for directions and he must have misunderstood me as he sent me back into Singapore. I had to wait at passport control all over again. I pleaded my case with a guard but I had to wait again. There were delays in the line up I chose with one of the people getting through and to top it all off it was time for a shift change. The older lady who took over looked quite stern. I explained my situation and was directed to wait with the other person holding up the line. I have my backpack on and the two of us crowded the little space that was there. The older lady was nice enough to call someone who would expedite my exit from Singapore and back into Malaysia. I whizzed by through the back passages in the now empty passport control hall. I found the right bus to take me across the bridge and into Malaysia where I had to go through passport control again. I saw a fellow backpacker and said hello. We rode in silence to the border. After passing through the border we seemed to be going in the same direction and I tried again to have a conversation. He was from Germany and has been traveling for a month and has ten days left. We went down to the station and as I went to the counter to inquire about getting to Kuala Lumpur he disappeared. Weird but no matter I have the info I needed. The bus to KL takes less time than the train! I’m just taking a break before finding the bus to the depot. 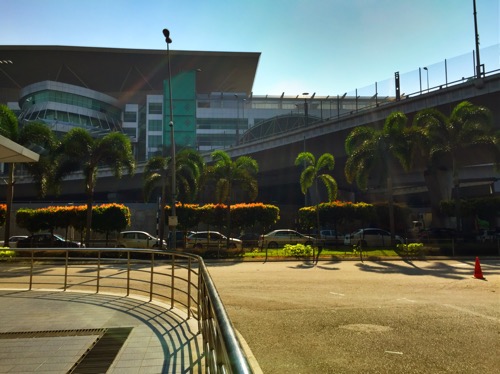 1058
I’m on the bus on my way to KL. We just passed an overturned lorry that took out the overhead sign. Traffic is snarled heading in the opposite direction. In KL I’ll meet up with a friend of my mine. We will be spending the next week or so together traveling through Malaysia and then through Thailand on our way to Bangkok. She’ll be my companion adding a different dimension to the trip.

I got the very last seat on the bus and the seat is the only one without a curtain to block the sun. Oh well I’m moving again which is a good thing. The difference between Singapore and Malaysia is striking not in the climate but in its appearance and feel. 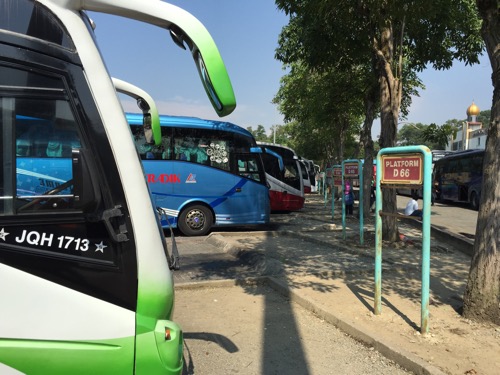 The guys that sold me the ticket weren’t wearing any kind of uniform. Some had some kind of id hanging from their neck but others didn’t. There was a bit of confusion when they tried to take my ticket away but that got sorted as well. He was the ticket collector making sure people went on the correct bus and paid their fare accordingly. There was one guy who got moved to another bus.
We are driving by big palm plantation now. It looks picturesque with the fields extending as far as I can see. 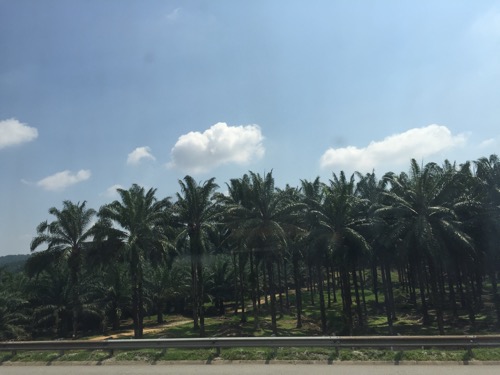 1224
We stopped for some refreshments and I immediately asked the driver if I could get into the hold to get something out. I bought a square in Dubai that I thought would work perfectly as a curtain. I had a bit of trouble hanging it up but the tape I borrowed from my places of employment worked like a charm securing it providing shade for myself and the guy next to me. He smiled and gave me a thumbs up when he realized what I was doing. It has made a big difference for both of our comfort. 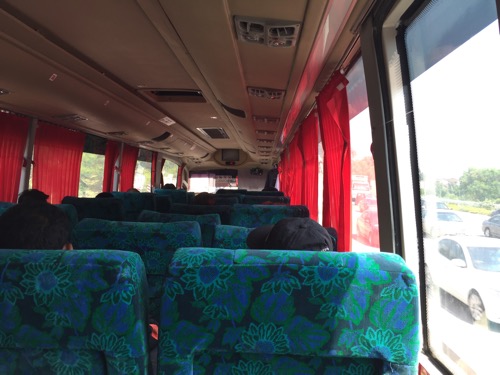 1351
I see raindrops on the windshield of the bus. The sun’s intensity attenuated by the clouds. From within the air conditioned bus it’s hard to tell how much cooler it is outside but I bet it’s not much. A rhythm plays from someone’s phone and in the silence of the drowsy interior it is enough to add some ambiance to the space. Normally during my commute to work I listen to music. I have found myself listening to the sounds around me instead on my journeys. I can tell when the bus accelerates by the difference in the whirl of the engine for example. As I become aware of the rattles and squeaks around me the faint sound of music becomes fainter drowned out by all that ambient noise. Looking at the time I figure we are going to stop soon before we start entering Kuala Lumpur. The sun is back again and through my makeshift curtain we pass yet another development or construction site. The developments that are completed remind me of townhouses in Vancouver’s suburbs. The double garage built in beside the entrance of a two story flat with that orange clay tile on the triangular roof. In the distance tower blocks spring up covered now by tarps but soon ready for occupation once the cranes are taken down. I’d take a picture but it wouldn’t do it justice through a dirty window of a fast moving bus.
1430
We did stop briefly meters from the sign welcoming us to Kuala Lumpur. I didn’t see the sign until after we pulled out from the petrol station. It is still hot outside as we traverse the spaghetti like tangle of off-ramps and highways. We just passed what appeared to be a train terminal. We are currently is some kind of a bus depot. We made a circle through the lot and are now heading out and pulling into a platform bay. I disembark.
1513
I made my way through the monstrous station finding my way to the metro. I’m glad I made a save screen of the location with the pin at the station closest to the hotel. The metro system is quite extensive. It has multiple lines going in all sorts of directions with names in a foreign language. I should be glad that at least they use Latin letters. I formulated my course and bought my ticket from the touchscreen machine and got my token for the journey. I’m making good progress and I made it here before the train that I missed earlier today!
1938
Cleaned up and ready to go out. We caught up on things happening in our lives and how nice it is to see each other again.
2254
We had some dinner and are having a few drinks at the bar. Rain has started falling. We are not the only ones sitting under the shelter of the bar’s awning winding down after a hot day in this city. I have a few moments to finish up before her return from the ladies room.