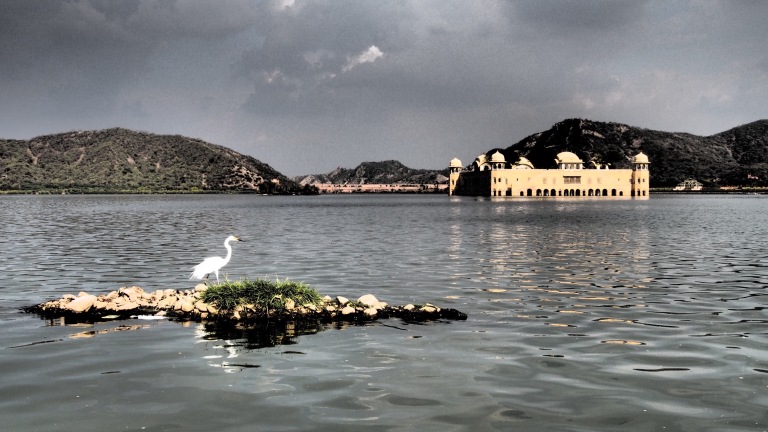 An overwhelming urge to sleep came over me yesterday. Letting the day go came through its documentation this morning. I debate in my mind the best time to be writing down my thoughts weather or not it’s in the evening or in the morning. Sometimes the morning feels better but sometimes circumstances dictate otherwise. Today is the last night before driving off to Agra in the morning. It’s a seven hour journey by car, a lot longer than I thought but manageable nonetheless. Today is a holiday in India celebrating the day of an important lawmaker and architect of India’s system Ambedkar Jayanti. It made the traffic noticeably better. I woke up feeling good and finished off writing about yesterday’s events. It took longer than expected so I messaged Hari with the updated time to meet and had breakfast. 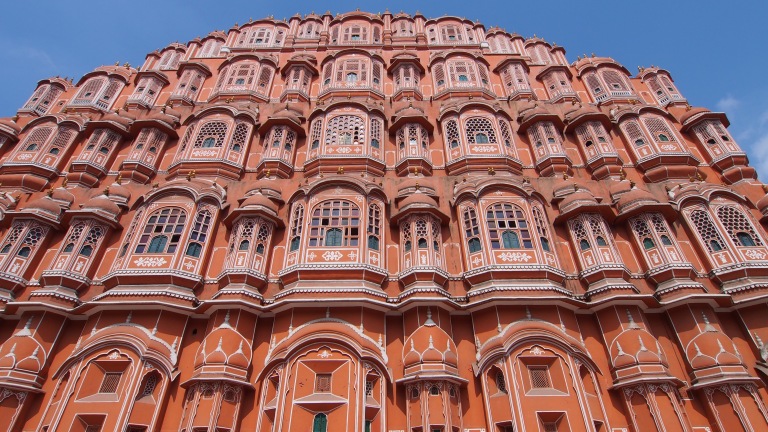 The coffee is not that good at this hotel and to top it all off the shower wasn’t working properly. I had to physically hold the button for the shower to work instead of the tap. It made for an unexpected series of contortions serving as morning calisthenics to start the day. The first thing we found was coffee and then to take a picture of the facade in the good morning light before driving off to the first destination the Amber Fort. 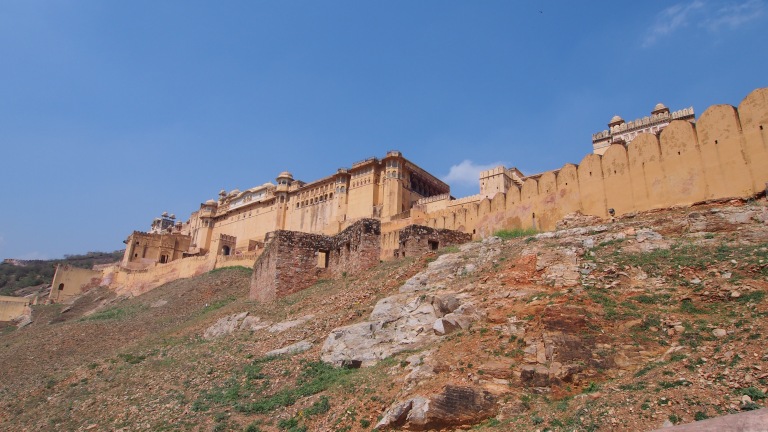 It is an ornate fort doubling as a residence for the ruler at the time. It is one of the many residences that are found in the area suiting the needs of his highness. They seemed like impressive and opulent places to live at the time of their occupation. The vast spaces provided contemplative moments of awe especially when viewing the city below. The first stop had many tourists. They became part of the tapestry as they wandered the many spaces of the place. 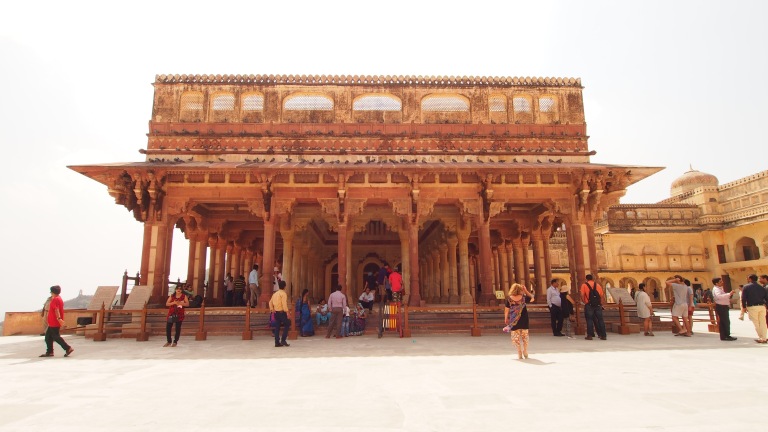 A cooling system is engineered into the shape of the Fort. Walking the corridors provided relief from the blazing sun overhead. The temperature outside probably never reached thirty but it was still hot in the relentless rays provided by that orb. 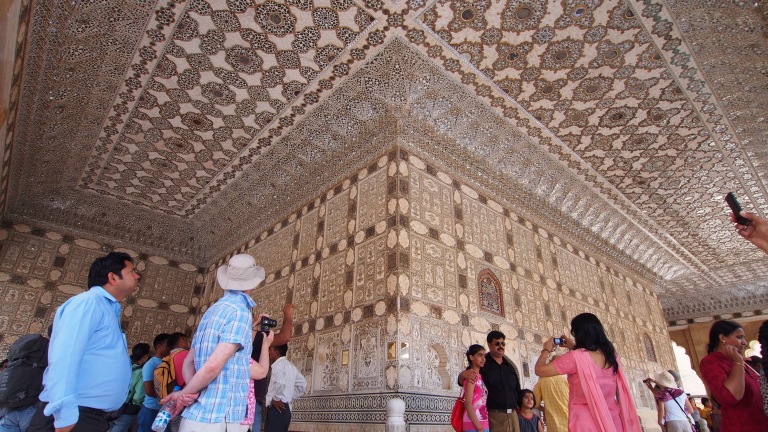 I visited three forts today Amber Fort was the first one of these. It had a majestic feel to it as well as being the most ornate of all of them. It was probably the smallest of the three as well. 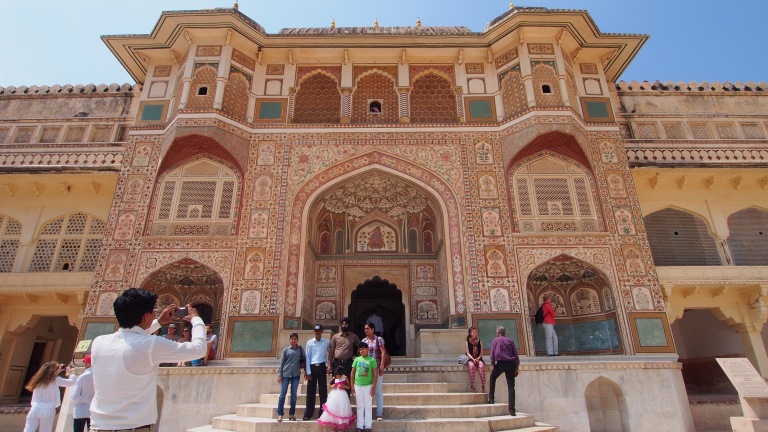 I spent a couple of hours at each of them. I made my way down through the phalanx of tourist hawkers selling their wares. Sandalwood carvings, puppets, pictures, services you name it. I walked down the path used by elephant rides for tourists not encountering any on the way down. They have rules about photographing them too. They are prohibited of course. 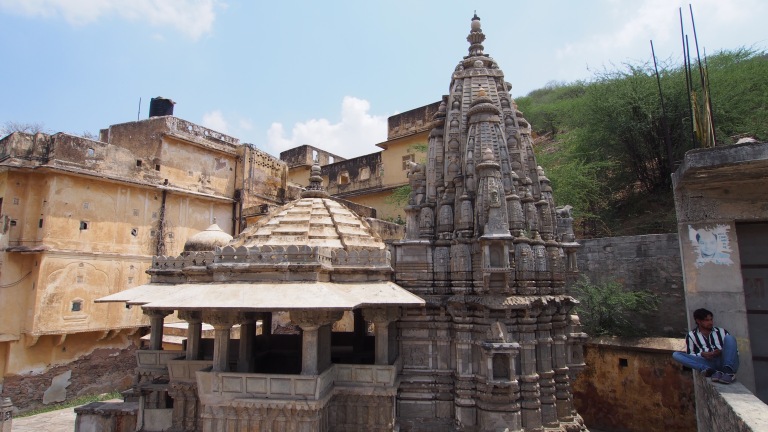 I found Hari chatting with his pals from Dehli that he tells me he never gets a chance to see there. Either he or they are out on the road when in Dehli. He told me that the guy recently charged with indecent behavior with tourists was a good guy. He never drank or did anything of the sort that he was being accused of doing. He told me that he is always careful with female patrons even though sometimes they fancy him. He has a wife and two kids that he is proud of. He wants to provide for them as best as he can. He was happy that they were accepted to a good school recently. He said that good karma helped him and it seems to guide his behavior in positive ways. 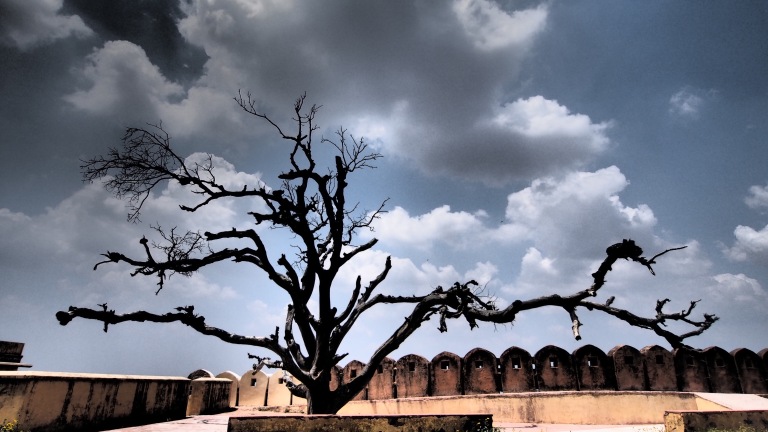 Hari drove me to Nahar Garh Fort next. This place had a nice feel to it as I spent the next few hours exploring its contents. The views out of the place were amazing.

The old city below was known to me through my brief exposure traversing its streets. The places I visited yesterday stood out by their geometry and visual dominance of the area below. I was privileged to get a tour of the nine apartment that housed the wives. Each of them had a two story flat including  a kitchen and toilet as well as a large bedroom upstairs. All of these flats was connected by a long corridor used by the ruler to pay a conjugal visit to. 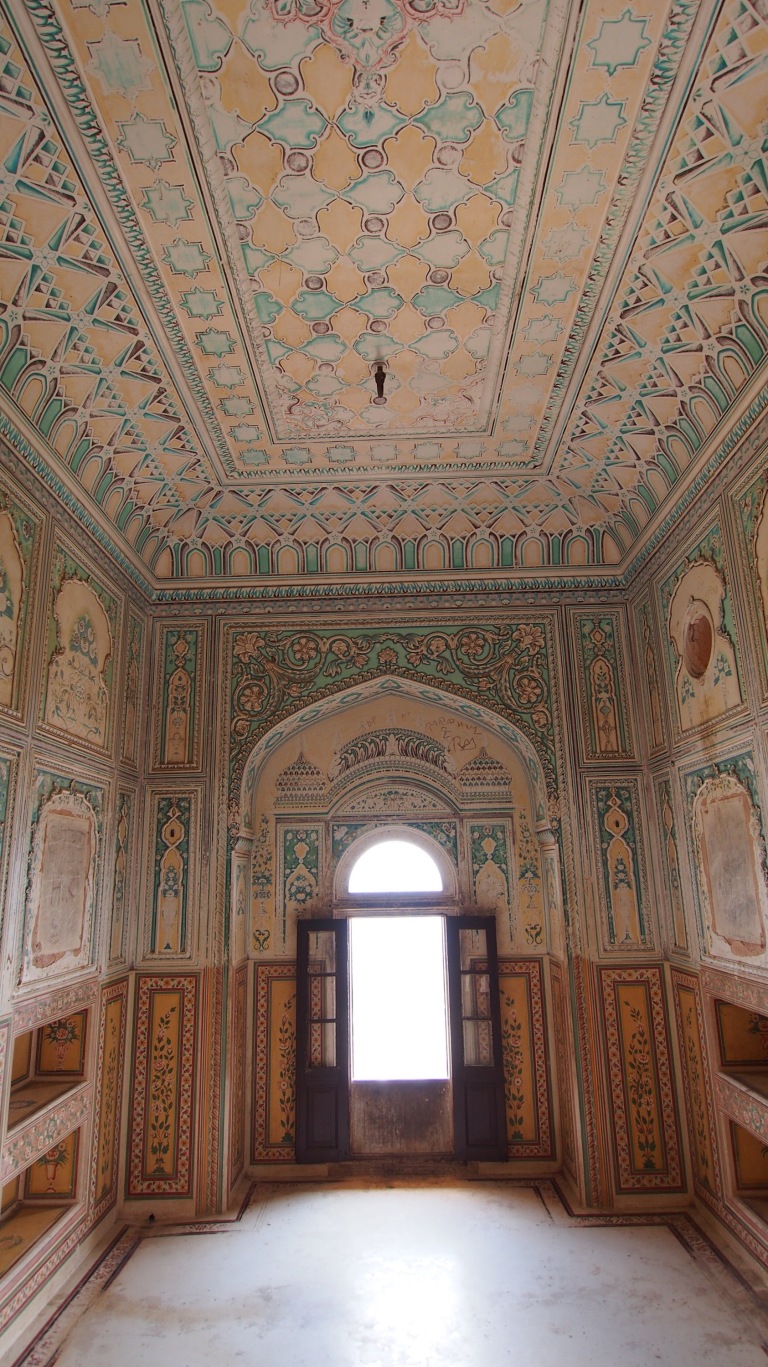 The favorite wife had the most ornate flat with the best view of the city below. The imagery on the walls suggested the purpose of the bedroom. Painted on the walls were sexual symbols representing phallic and vaginal symbols. On the bottom of one of the columns was a series of these symbols painted and carved into its base. The guard invited me to feel it’s contours and I must say they did a good job carving it. He said that it was the queens shape and I asked if the sculptor got to touch the model? 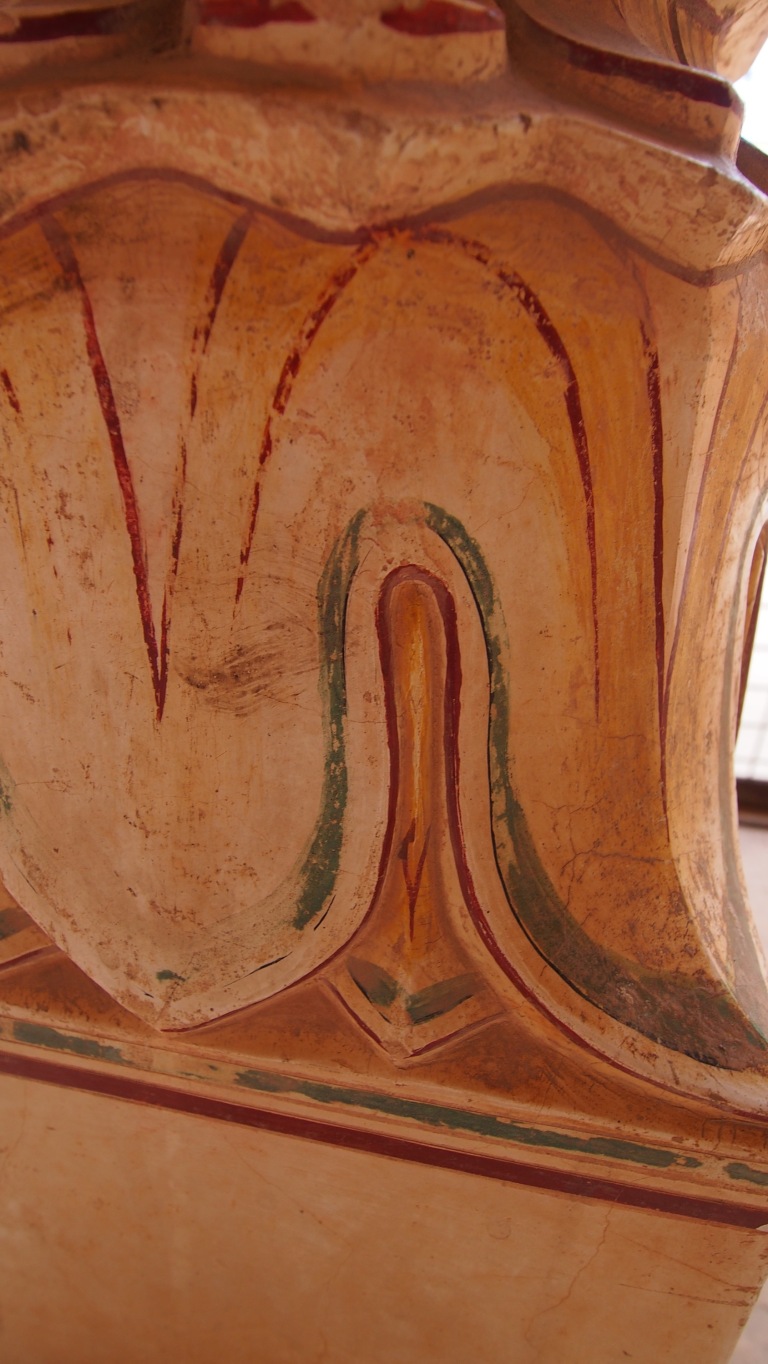 They didn’t show me around for nothing. They of course wanted something from me and they asked after showing me something truly marvelous. They asked me to place my ear to a part of the arch in order to listen. Sure enough there was a sound emanating from the surface. I looked across the way at another giggling guard and they repeated the act with me reciprocating with my hello. The contour of the arch carried the sound from one side to another so that back then communication could take place in private out of earshot of prying minds.

All day I felt like a celebrity. Everyone kept wanting to take pictures with me. When I walked into this fort I walked by a big group of kids it seemed like all of them said hi to me and asked how I was doing. I had to respond back to them with the same cordial greeting. Walking about I engaged in many conversations some of which may have gone nowhere but were fun to engage in. 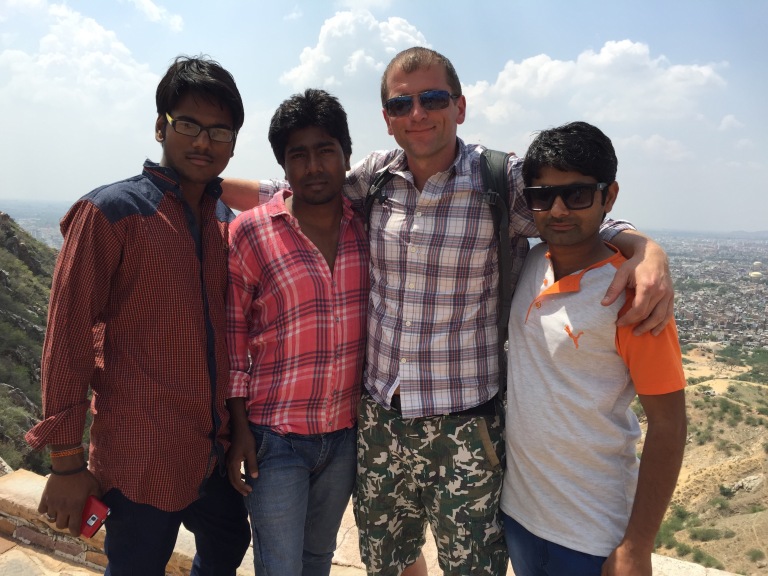 Supposedly it’s a “thing” to get your picture taken with a white foreigner. I obliged quite often as they all were friendly and polite and generally didn’t want anything else except some sort of interaction. Oftentimes they ask where I’m from and I answer differently often getting a quizzical look when I say Poland. Some seem more familiar with Canada. I enjoyed today’s excursion a lot more than yesterday’s.  Hari divided up the sightseeing into geographical areas. Splitting Jaipur into two days is brilliant. 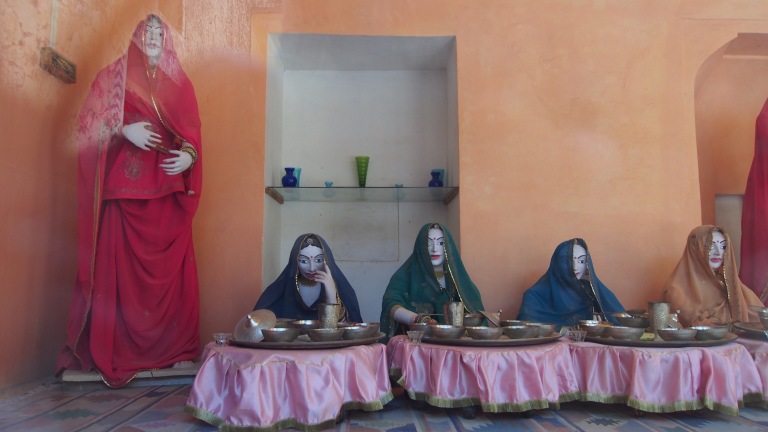 The last place on our itinerary in the area was Jaigarh Fort. It is the most extensive of the three forts. It houses a strange collection of artefacts and displays along with spectacular views of the sights below. I spent a long time navigating this complex. It had the largest variety of things to see. The entrance to this place is covered by the ticket used to enter the city palace. It is worth checking out. 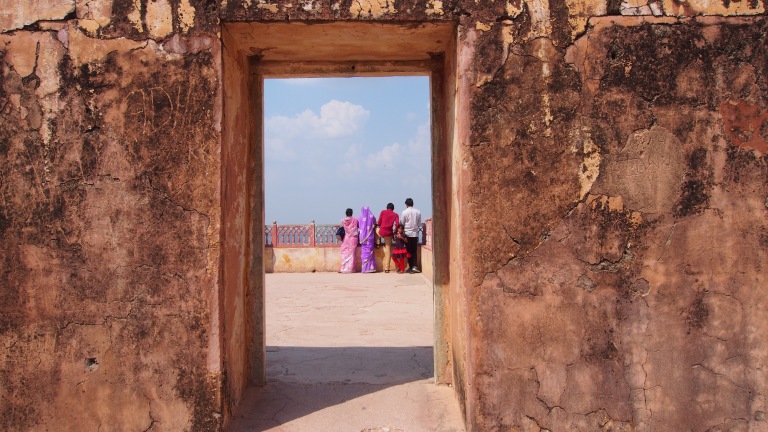 Behind every doorway lay a new vista to admire. I was at odds trying to capture it but I know that some things can’t be bundled this way. The landscape is one thing the architecture is another. There was one picture that I would have loved to get except that access was denied by what appeared to be some kind of production taking place there. 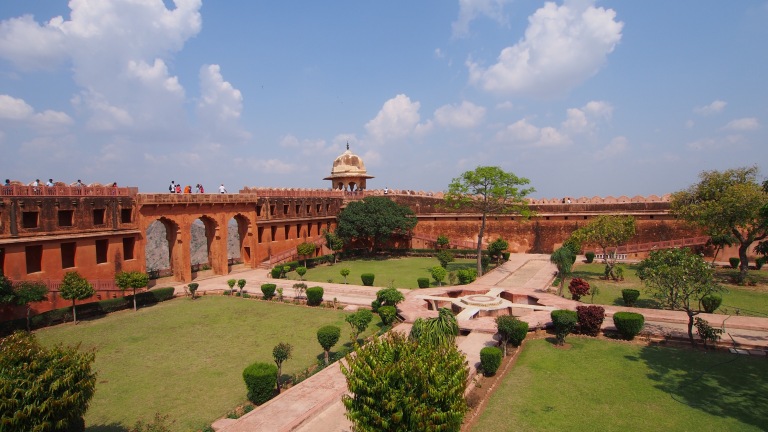 The way the arches framed the mountains behind them looked spectacular. I spent some time navigating myself to the access points only to find locked gates or a guard with a stern expression on his face. I captured so many nice views that they seemed to become padestrian at some point. Can one become viewed out? 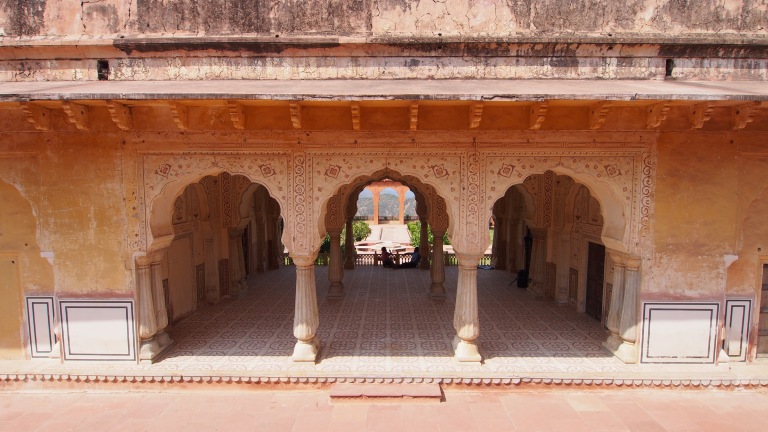 If anything I tested that premise today and there was enough variety to keep things fresh. Hari said that for a fee he could drive me around inside the fort but I’m glad to have walked around up here. Considering all the sitting that will happen tomorrow it’s a wise choice. 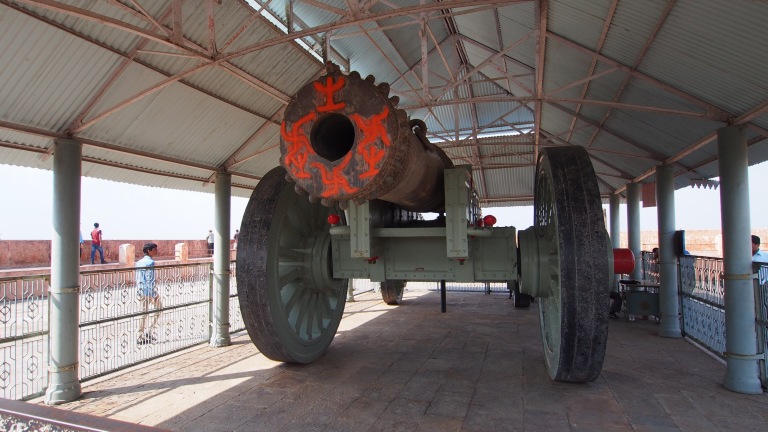 The major attraction of this fort is a giant cannon. Once it was the largest of its kind I the world. Extra care and attention was payed by the guard to rip away the ticket in front of this display. I can hear Little Red Riding Hood’s query “my! What a large cannon you’ve got there”. I must say it is a large cannon.  Supposedly it had to be pulled by six elephants  according to Hari. This Fort also housed the foundry used to manufacture the cannons. This fort served many purposes and is connected to the Amber Fort by an underground passage. Interestingly this entire complex never saw any military action. It can explain why all of this is so relatively intact. Over time all of these Forts will be restored to grandeur a shadow of its former glory. 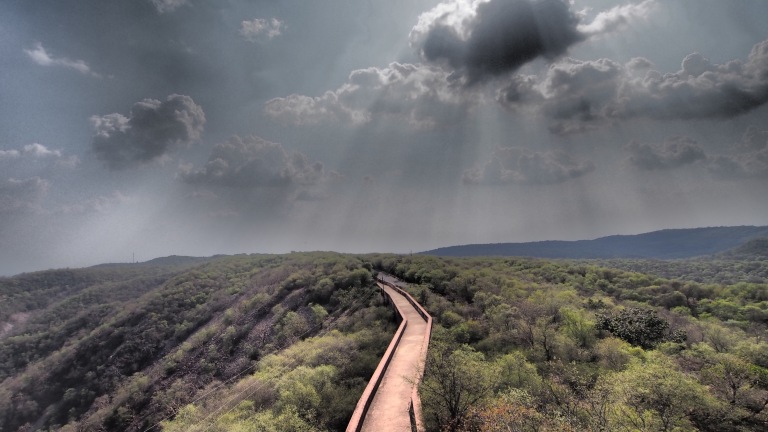 Throughout the day we kept seeing pilgrims marching along the road. These men were on their way to Ajmir for a Muslim festival. They walked along the road carrying flags sometimes chanting but always with purpose. 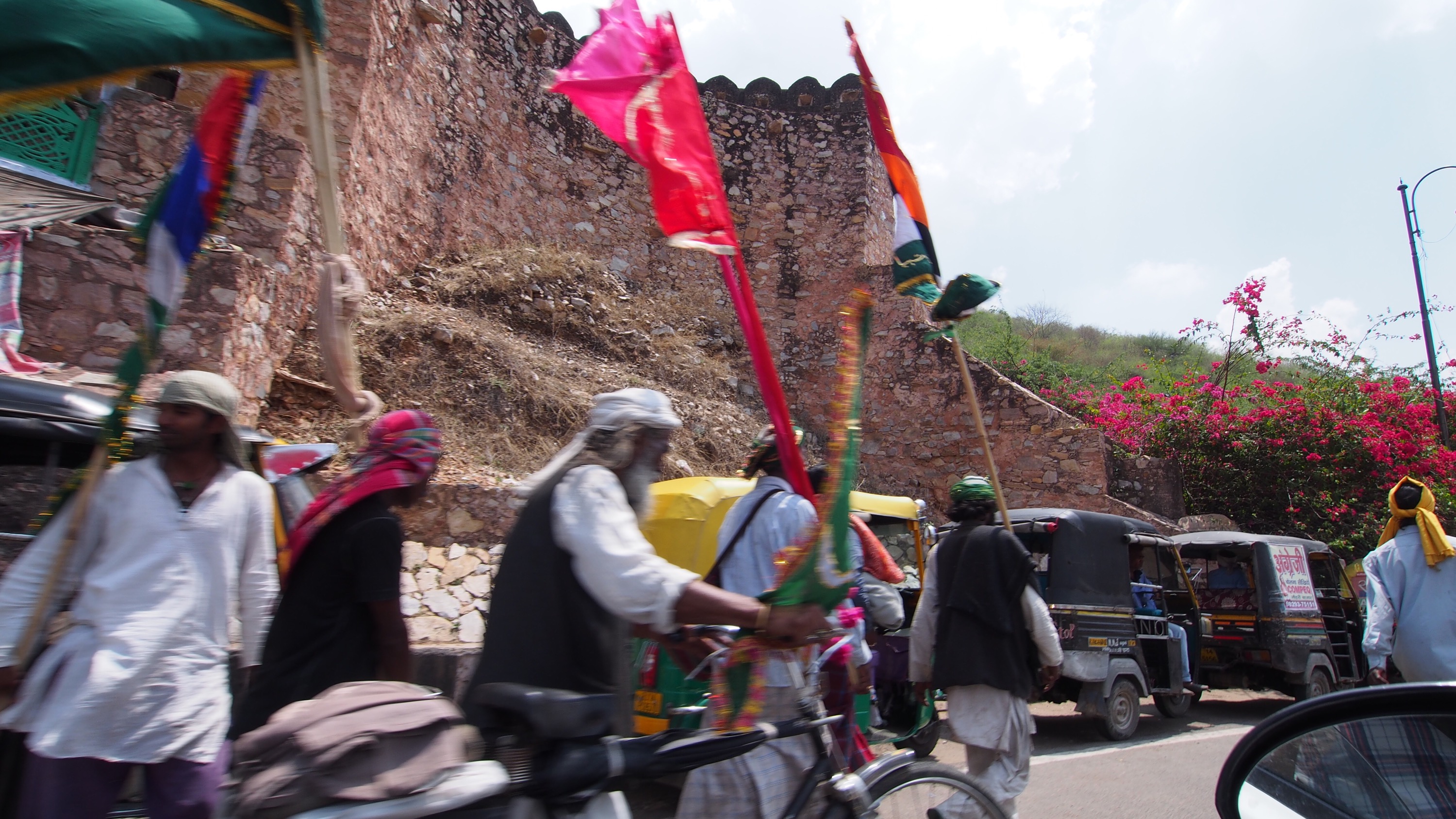 As we drove back  we stopped by the water palace. It is in the man made lake built for this purpose. The bird in the photo above kept flying in and out of the frame. I was playing around with the settings trying to capture it in the frame. It’s time to pack and I have to go to see if the laundry came back. We have an early start tomorrow and a long road ahead.