Sleep never felt so good. Prying myself off the bed took some effort. I walked so much that Fitbit gave me a “boot badge” for my efforts. 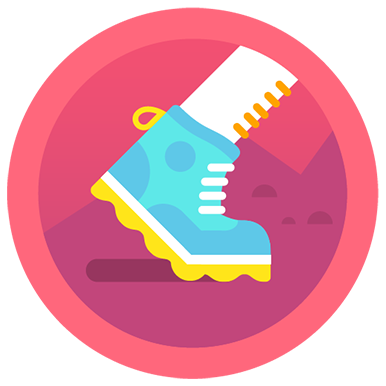 It was in recognition of walking 36590 steps! It used to take me two days to do that distance. I had to check out by eleven and had to do something before catching my flight to Mumbai that was leaving at 1845. I decided to have some breakfast and have a coffee somewhere afterwards. The day was sunny and hot. The skyscrapers provide shade and a cooling wind from the heat and the sun. I sat outside and wrote my story of the day before. I kind of enjoy doing this. It gives my travel a bit of a purpose and allows me to reflect on what has happened and how I could do better. I have learned things so that I can strategize better. Much of this trip is ad hoc as I find this kind of exciting and interesting. However much one can plan things to go a certain way things can be go completely different. It’s like not realizing that on Friday the prayers would result in many shops that I wanted to explore the ones with gold were closed. Sitting there also allowed me to check out the people walking by. To see the multitude of different people and tried to spot which ones lived here and which ones were tourists like me. While a lot were non-Arab I surmised that most of them actually lived here. Time quickly passed and I needed to go back and pick up my bag and make my way to the airport. I walked through a neighbourhood that seems middle class to me. Many of the houses had blooming flowers and I stopped to take photos of some of them. 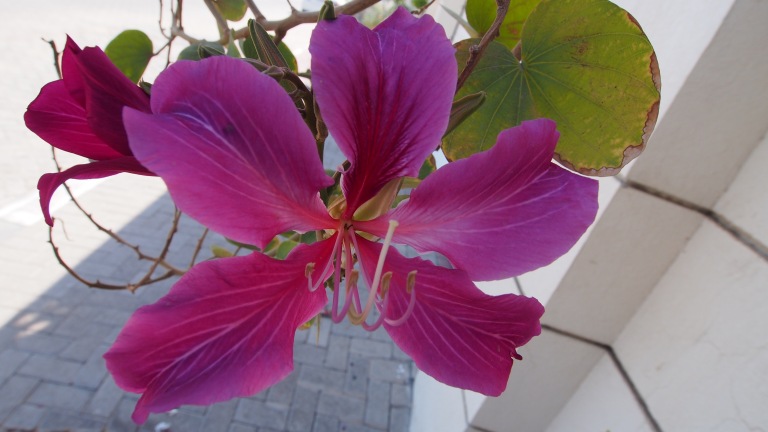 This slowed my progress a bit but I still had plenty of time to make it. After picking up my bag I tried to buy a ticket from the ticket machine found near the bus stop but it was unable to give me one. At least it returned the cash I put in. I figured that there were no tickets available and decided to walk up the street to the bus station located there. The ticket machine there seemed a bit off as well and a guard that was standing there offered to help. He said that he watched me walking back and forth between them and wanted to help. Good thing I went to the station as there was a ticket office which was able to sell me the appropriate ticket. I originally planned to bus to the metro and train it from there to the airport but I noticed that there is a direct bus to the airport and decided to take it. It gave me a chance to see more of the city. It passed through some of the parts I visited yesterday and saw much more. It’s a really bustling city in those older parts. The buildings are much smaller too. The traffic though was much heavier than I anticipated and the estimated hour turned into more. The traffic kept moving and it soon the airport was soon close. An airport employee asked me which airline I was taking. He suggested I get off at Terminal One sine I wasn’t flying with Emirates Airlines. It was a good suggestion saving me valuable time to check in. After the check in I had just enough time for a coffee and a call to my hotel. I would be arriving at close to midnight and the hotel had complimentary airport service and would have a driver waiting for me when I landed. It was time to find my gate. It was a busy time to try to get through passport control. All these delays to pass through and get there resulted in me arriving fifteen minutes before take off. It was kind of nice timing. Soon the plane took off for the two and a half hour flight. The capitan announced that the tailwind and efficiency of the loading we would be arriving early. I felt good with everything going so smoothly. 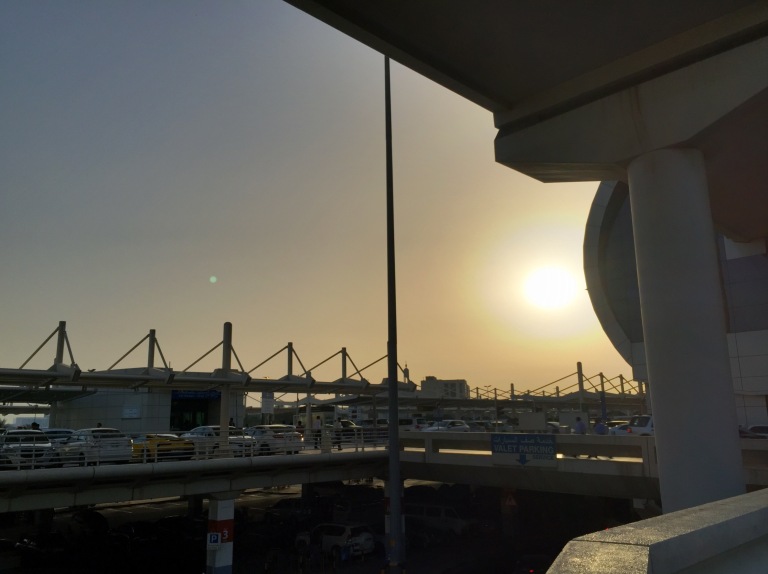 There are a lot more forms to fill in getting into India. There are customs forms, health forms and an immigration form. I picked up my bag and headed to the exit for another check through the nothing to declare line. I was stopped and told to go to customs control.

I have with me this little gold coin. I couldn’t send it with my computer as I would have to declare it and didn’t want to risk that package not making it back. So I’m carrying it with me across the globe on my way home. There seems to be some law against bringing in gold into India. From the customs form they charged 36% duty on its import. The coin was amongst other coins that I have collected from my journey so far. It’s density must have been picked up by the scanner. The guards calculated my fee and I tried to explain why I had it. I wasn’t happy about what was happening. My explanations were falling on deaf ears but I managed to talk them down to fifty quid that I paid to one of the guards in a vestibule away from prying eyes of the cameras. I was essentially shaken down by the border control guards. Welcome to India. As I walked out the driver was there waiting for me. It was a short chaotic ride to the hotel. I have to figure out how much to tip people since I suspect I may have been giving them too much so far. The exchange rate is changing as the pound is falling and even with this fact I’m essentially giving them a quid. Time to learn some more things here. Let’s see what tomorrow brings 😀