This is a big big city and as I sat there in the morning looking at the map and I formulated a plan. The Hagia Sophia is one of the places that I want to visit in Istanbul so after having some breakfast I set off in its vague direction. Along the way I saw the Galata Tower in the distance and decided to check it out.

This tower was originally built to be a lighthouse now it serves as a tourist attraction. It is possible to buy a ticket and take the elevator up to the observation balcony. Of course I did that and was not disappointed by the view.

As I was entering the observation deck there was a lady who was having difficulty stepping out onto the platform. I kind of observed her and her husband as they both were clearly anxious being this high up in the air. They were also blocking my path around the observation deck. They ended up going back inside. I spent some time up here taking my time admiring the view it was really nice out.

I continued on and got slightly lost eventually though finding my way to the bridge that would take me across the water to my destination. The city is quite hilly and there is a lot to see so I’ve been taking my time. There are a lot of mosques here too and the call to prayer adds a feel to the city. As I approached my destination I decided to stop at a place to have something to eat so that I could take my time inside.

To my dismay it became clear that the museums are closed on Mondays. I didn’t want this to ruin the day so I continued on deciding to visit the Grand Bazar. It is a giant ancient market that has many many stalls with various wares that are tempting to be bought.

The plan was filled with lots of people as they meandered around looking for and looking at what was on offer. The vibrancy of the place was palpable. I left there empty handed proud to have resisted the temptation to splurge on something that I’ll have to carry around with me for the rest of my journey. I like to collect maps and shot glasses from the places I visit. It’s much easier to carry and the collection can be displayed easily. I continued on and walked through the university grounds that were nearby. I was on my way to the Süleymaniye Mosque. It’s the mosque I was taking pictures of the night before trying to get the zoom and settings right for. I can see it from where I’m staying at and wanted to see it up close.

It’s an impressive and imposing structure dating from the 1500’s. This mosque was built by Suleman the Magnificent one of the great Ottoman rulers. He is buried on the grounds along with others. After appreciating a great view of the city I decided to go back to the flat and recharge for a bit. I didn’t expect to walk through a neighborhood like this though. 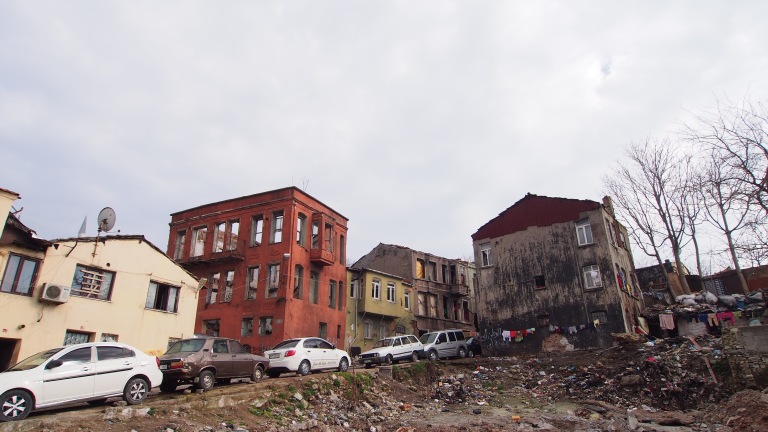 Every big city that I’ve ever been to has an area like this. The place where poor people live and where TLC has been abandoned. I noticed being noticed a tourist gone astray. There is a poignancy to areas like this a strange beauty. I felt the same thing in the townships in Cape Town when we visited there. I knew I was close to the remains of the Aquafer from Roman towns so I continued on to see them.

These were built in the fourth century and originally were even taller than now. They supplied the water to the city and the palace. I can see them from the flat as well off in the distance in the horizon. It was a straight path from here to the flat. Passing over the bridge I saw a shoeshiner drop his brush so I called out to him. He was thankful and he wanted to shine my shoes as a thank you my phone was also ringing over and over again. It was the agency asking why I haven’t handed in my timesheet. I felt kind of angry at them as someone should have updated my file. The calls are £1.50 per minute in Turkey and told them so. In the midst of this the shoeshiner somehow convinced me to pay for the favor but he had no change and he ran around the bridge trying to get some. It was easy to see that he was disadvantaged and hadn’t made any money for a while. The choices he made brought him to this point. There were no shops in the area to get change from so against my better judgement I let him keep the change.  In effect he got twelve quid. It was the second shine my boots have gotten today. The first was much better. My boots haven’t looked this good in a while and I hope he buys food for his kids like he said he would.

After relaxing for a while I went out to get a kabab and walk along Istikal Road the main high street emanating from Taksim square. It was close to sunset and I wanted to capture the sunset from a good vantage point somewhere along my way. I found one overlooking the football stadium. Once the sun set I continued on. There were a lot of people walking around and the ambiance is nice on the high street.

The old streetcar rumbles along. There is only one track so it travels back and forth ringing the bell to get people to move out of the way. After that I was done having walked almost 20km today and with the travel here and the emotions of saying goodbye I said hello to sleep.