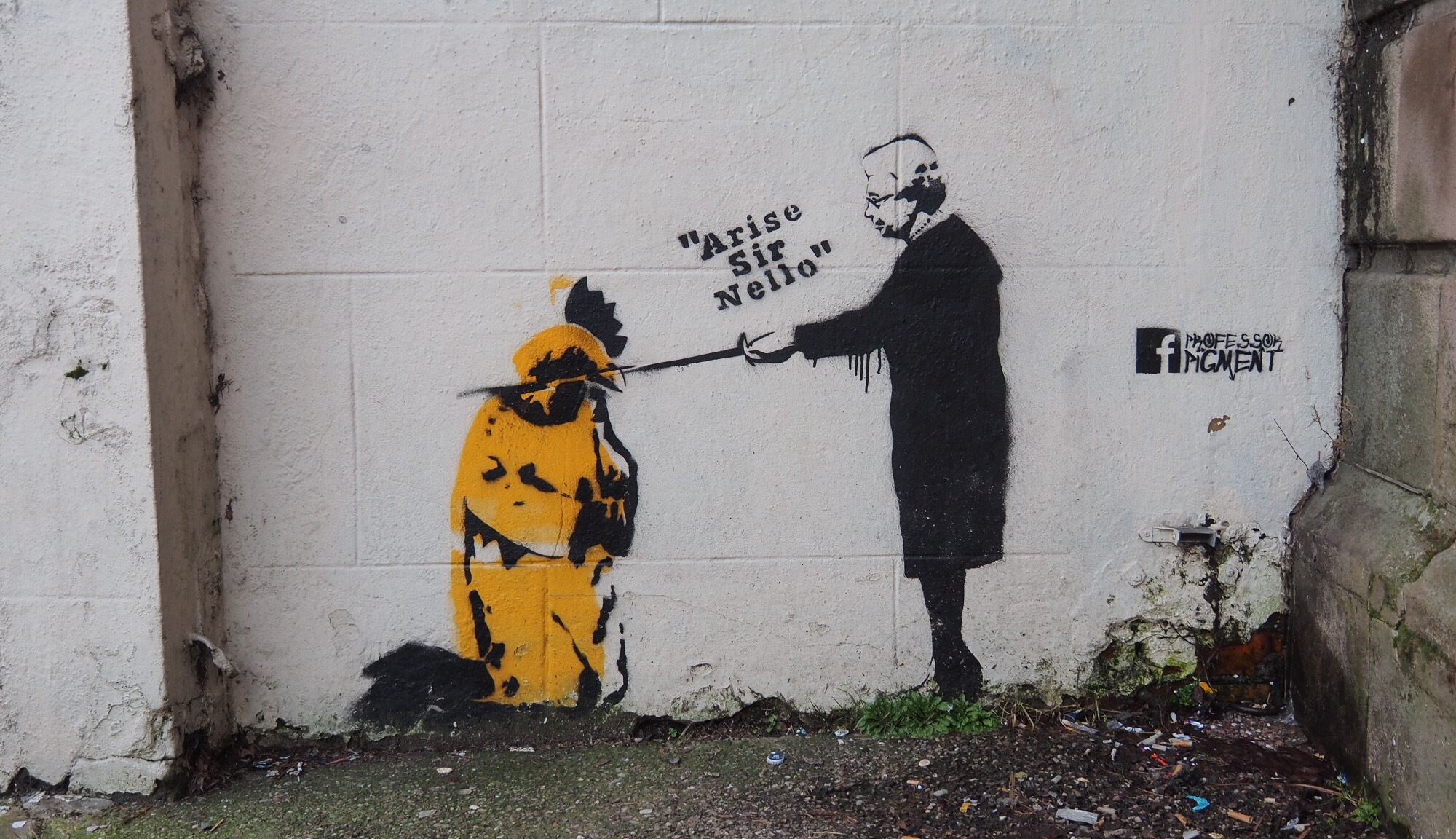 For whatever reason dates and the annual passage of time has become something that I’ve started to pay attention to. The question of where was I last year and what have I done since that time has become intertwined with this blog. I haven’t looked back but the anniversary of my first post is coming up. This fact is sometimes in the back of my mind as I go about my daily business.

Paying attention to those little things has become more natural over the past year. The strange jumps out a bit more prominently and the funny is a bit more animated. Maybe the writing and the photography has helped me pay better attention to the life that happens around me. Maybe the experiences that I’ve had have changed me as well and those that I’ve had prior to beginning this experiment have finally blossomed into the consciousness traversing the land in this corporeal form.

There was a problem with my birthdate in the corporate registration registrar or whatever it’s called. They had my birthdate pegged a full decade earlier than my actual one. This is the reason why I’m not getting paid. With all the ID that I’ve given them it was a mistake that has probably been there since the beginning of my company. I had to make a call to my accountant and get it sorted. Just another little thing that impacts me directly in these dire financial times. I think that the end of these woes is almost at the end. By the deadline Monday morning I will finally have my timesheet submitted. This means that by Friday I will finally begin to have a bit of money. Or so I hope.

Today it was nice in the morning and it continued throughout the day. The low sun even at mid day gave the clouds a wide array of contrast. The bottom darker than the top their appearance like little fluffy clouds that kids would draw in their sketches. Work was stretching out throughout as there weren’t that many cases booked and of those that were many DNA’d. Of those that did arrive the cases themselves were long with the patients having to hold a position for a very long time. They were troopers though and made it through very well.

The last case of the day involved a patient that was very poorly. There was oxygen and monitoring that had to be done as well as precautions to protect ourselves from infection. There were enough people there to adequately finish off the day. I don’t mean to be heartless and leave but I have a limited role due to regulations although I realize the amount of clinical experience that I have is substantial. It allows me to also critically examine and evaluate the processes used in cases where precautions have to be put into effect. 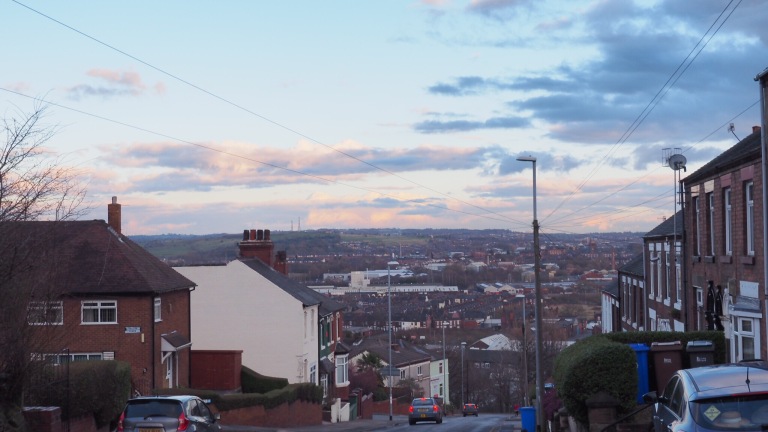 Since the day is so nice I decided to walk to the station again. I took a different route one that would not get me to the station for the 1706. There are a lot of winding roads here that are a result of the geography of this place. At one point there was a vista that I just couldn’t capture the way I wanted. I walked quickly surveying what was around me. This is an olde blue collar town that has lost some of its industry. Stoke is famous for its potteries. One day in the future I’ll have to go into the center of town to see what it’s like. For now I captured what I could.

There was time to check out the things that happen outside the station. Someone always waits for some train. There was a group of young women or maybe girls having fun and being animated. Their clothing and mannerisms attracted the attention of passers by and one man in particular carrying a garbage bag filled with something. I watched him as he walked by and stopped and eyed the group and a smile came over his face. He wasn’t hiding his admiration of them as he looked each of them up and down. Why did this catch my attention? I recall a convo I had with one of my colleagues about the grooming phenomenon present in this area. There is also the trial of a former premiere league footballer accused of grooming a 15 year old. I had about fifteen minutes until my train so I observed the scene as these thoughts ran through my brain. There were other people that walked by and soon the guy moved closer to the building and observed these girls and it seemed to me that he wasn’t hiding the fact that he was checking them out. What was he going to achieve with his garbage bag in hand? What was I going to do ask him to stop staring because it’s rude?

Things have changed for me now that I am committed to being with someone. I was single for a long time however and being a man it was inevitable that someone caught my attention and fancy. This automatic response to someone who spent some time in the morning getting herself ready in order to face the day. Scientists say that we are hard wired to respond to certain proportions and a certain symmetry of the female form. Women and girls aspire to this ideal and men chase after it in various ways. Some of this behavior leaves scars that have to be healed as self confidence and self worth is infected by these experiences. 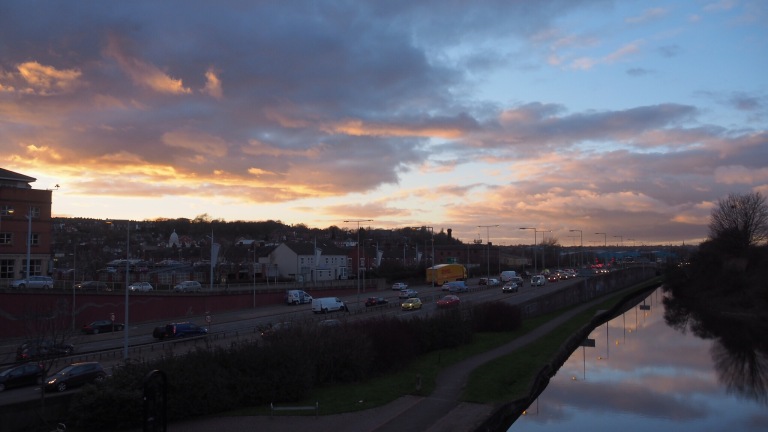 The sun was setting beyond the horizon coloring the sky in a multitude of reddish hues as the train rolled towards Stafford. There was a ready meal and some ready fruit that had my name on them when I get to the flat. Not a gourmet meal by any stretch but I’ve been trying to be somewhat good. The tools that I have to work with the ones provided in the flat are woeful. Frankly after a long day making a meal from scratch is counter productive. I’m being frugal in this respect. I’d rather have a chat with Barbs. It’s nice to see her even if she is on a screen digitally transmitted from across the globe. Sometimes the signal is good on both our ends and the clarity of expression and mannerisms comes through brilliantly. We have a normal chat about our day and about things that cross our minds. Of course I would rather us be close to each other and talking. The reality of it is a bit different. We can and we are getting to know each other in a different way. We are communicating with words gestures and of course pictures. Being live is a joy.

Only a few short years ago this wasn’t possible. Our ability to be mobile and traverse the globe has necessitated and fostered this technology. We are just two of many that maintains contact this way. As I look and listen to her I’m reminded of the many things that have attracted me to her and how she continues to hold my fascination. Most importantly we laugh a lot when we are together. We have a seemingly long time until we plan to see each other next and we both can’t wait for that time. You would think that we are sad but we suspect that what is important to us is that we are choosing to stay together and this temporary hardship is inconsequential to our long term plans. We are happy that we found each other swimming in this fishbowl.

We talked until our service providers jinxed the service with some throttling. There is a lot of shit service out there. She had to go back to work and I had to pack for my journey to Salisbury to visit Bernie. I had to find some tickets and plan out my journey. Searching around allowed me to find a deal but it’s still an expensive journey. Time is of the essence as the stork is going to make a delivery to his household soon. He’ll be busy soon. I have enjoyed our friendship and it’ll be good to see him and the rest of his family. 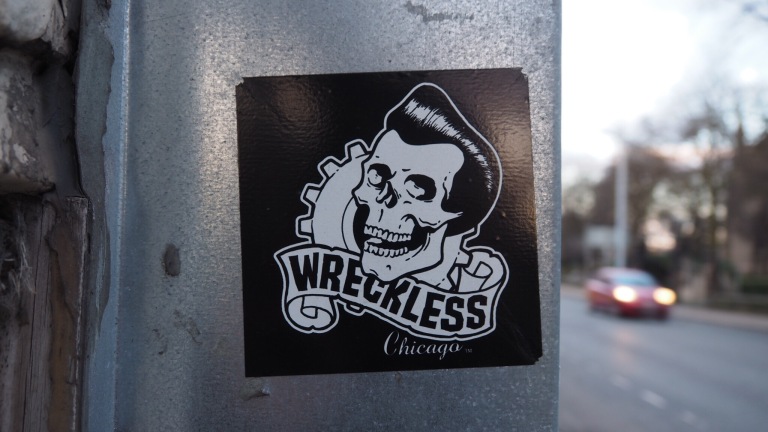 The morning came and it was nice to have a shower. Yesterday when I walked into this room I noticed that they were doing some maintenance on the enclosure. It explained the smell in the hallway. I thought it was some cleaning fluid spilled somewhere. Instead it was this the smell of drying adhesive. They left no notice or give any warning about doing this. The toilet is in a seperate room so there was no need to walk into this room. I have a sink in my room where I brush my teeth. I felt a bit dumbfounded and almost turned on the tap. I sniffed my armpits and decided to just slather on more deodorant. I would have made a big mess as the shower curtain is gone. The shower this morning felt extra nice. 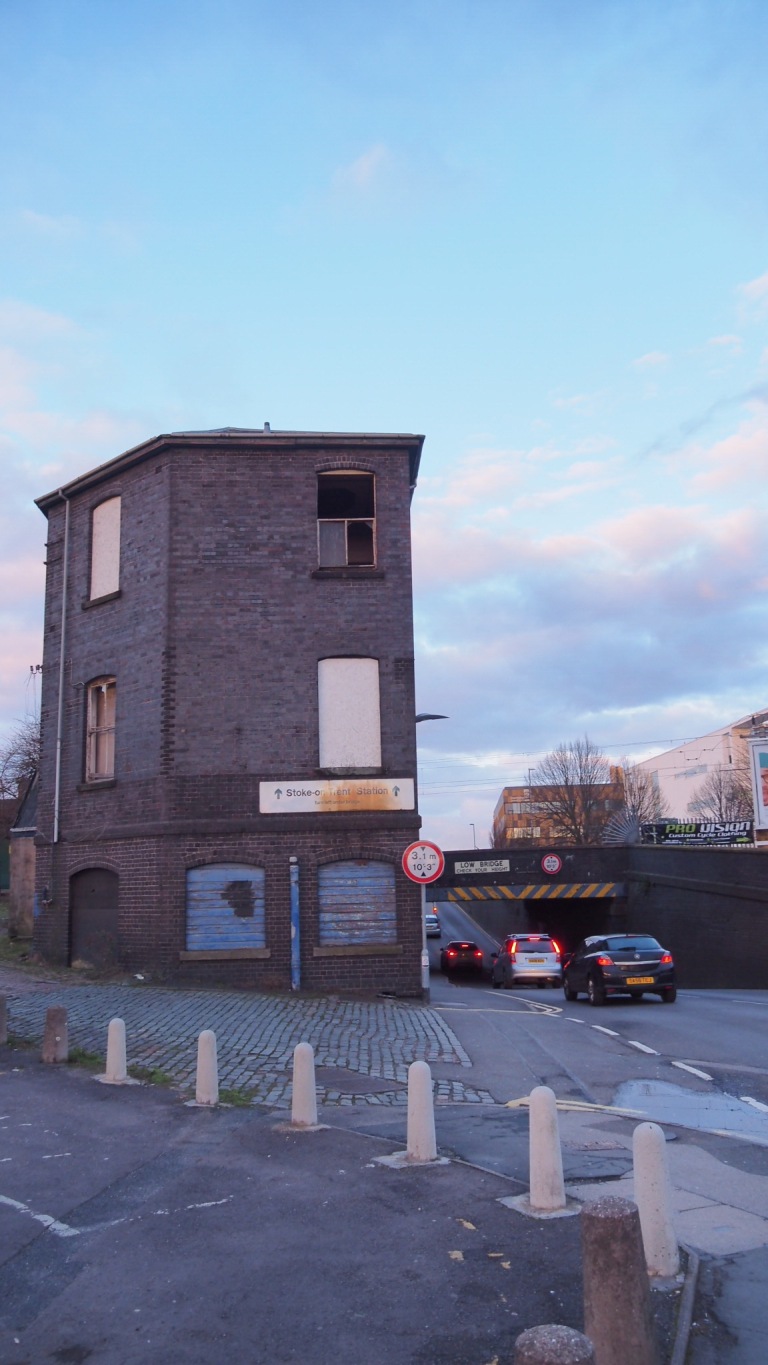 The day was lightly booked for some reason. It’s hard to make it through the day when it’s like this. It’s important to perform a good job on days like this. Walking back and forth with intent and nowhere in particular sometimes works to kill some time. Chatting up my colleagues helps as does helping them out if I can. I brought in my stress ring to squeeze as I supervise the acquisitions pacing back and forth like a solider on duty. Some of the patients were pretty nice. All were older gentlemen with a sense of humor. Joking around with them to get a laugh out of them and make them feel comfortable and at ease. Some of them had good stories to tell about their lives. They imparted some wisdom and appreciated being taken care of. I finished all the patients and left work a bit early in order to make it in time for the train to London. In the time I stood there waiting I figured out why I wasn’t getting the email I’ve been waiting for from the company that will be handling my payments. When I worked at another location they kept sending me reminders so I arranged to have their emails be directed to a particular folder. I’ve been the cause of this delay although there has been problems with registration. 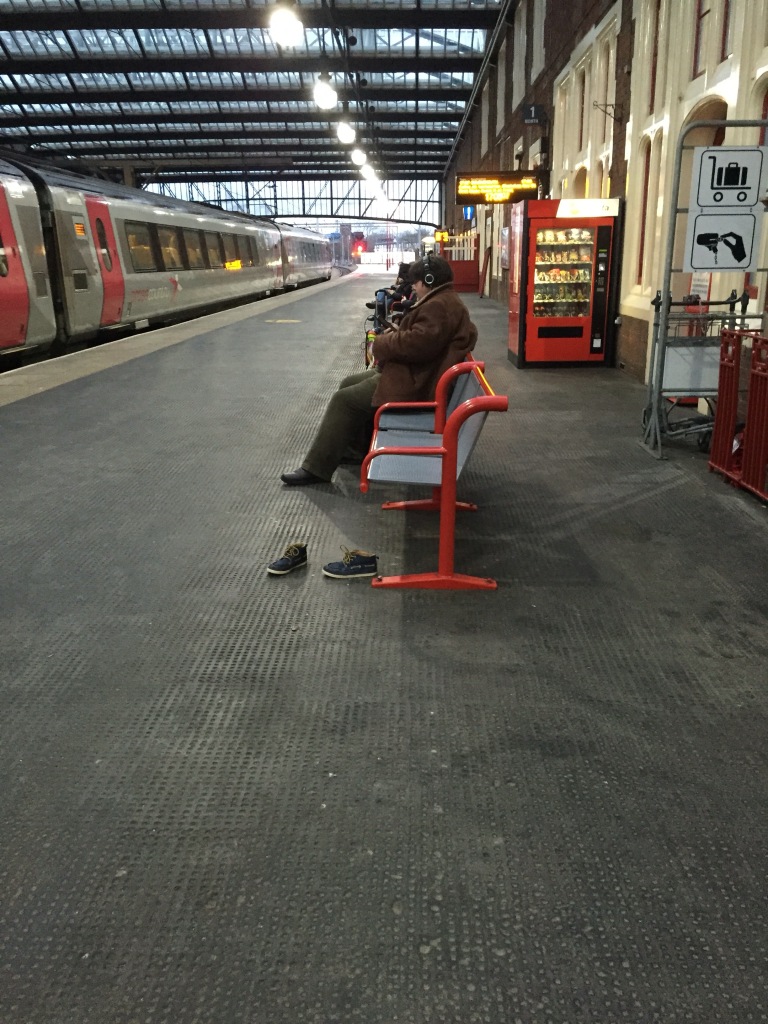 Virgin operates the service from Stoke to Euston. Their service is usually punctual. In this instance they were on time but Bernie messaged me with the news that there is problems with the SouthWest service to Salisbury. Apparently there was an incident where a woman was struck by a train at Earlsfield. It’s sad news. The whole service has been disrupted for the entire day. Getting info was difficult as the wifi that I paid for didn’t work or worked so slowly that it was unusable. Eventually though I found that trains to Salisbury were getting back to normal service. My train from Stoke reached Euston late and i quickly rushed to the underground for the short journey in the Northern line to Waterloo.

Waterloo was crazy but I’ve seen it worse. It is way past rush hour and those wanting to make it home have already found alternative ways to get there. Soon I’ll be in Salisbury for my little reunion.