Newer and fresher. Progress is unrelenting it seems. There is a constant refinement and improvement of things. At the end of their lifespan those things meet a sad end relegated to a corner in a box or the recycling heap. Well at least there they could be productive and acquire life as a new object.

If anything this is a eulogy to an object that has been my companion for a while now. In a way it has helped me look at the world in a different way. I’ve gained a new appreciation of perspective and the process of digitally capturing light. With it I have captured moments that are still in the aether but at some point will attain physical form.

My object met an untimely end, but it’s never really a good time is it? It wasn’t even a crazy fall but a light trip that may have appeared dramatic but more likely comical. Catch an edge gliding down from the chairlift. I think I even laughed at myself. But the cost of that slight mishap hurts and like a missing part it had to be replaced quickly to maintain the momentum that has built up over the past few years.

When a new object comes into your possession the tendency is to play around with it. The other pertinent tasks get put on the side burner for a bit. This is what happened today. The sorting and packing got put off to the side. It wasn’t all unproductive though but I came upon crunch time when I saw the time and realized that soon I will have to meet up with Barbs. I wanted to shoot off a couple of emails as well as testing out my new toy in the field.

We were going to meet up for a steam in a rougher part of town. This Steam place has been operating since the 1920s which is kind of amazing considering the age of this city. It was my first time sitting in such a hot environment. I’ve been to steam rooms before but none that were this hot. The hot wave of eucalyptus hits the nostrils and fills the lungs burning slightly. Over time the lungs get used to the aroma and moisture and the beads if sweat percolate from the skin. We sat side by side breathing and meditating mentally removing energy blocks throughout the body.

The cold shower snaps one back to reality from the high of being in tune with the internal motions of the body. The heart races from the exposure to the heat and the mental silence of the mind. We laughed and cycled through the hot and cold in this medieval looking space. 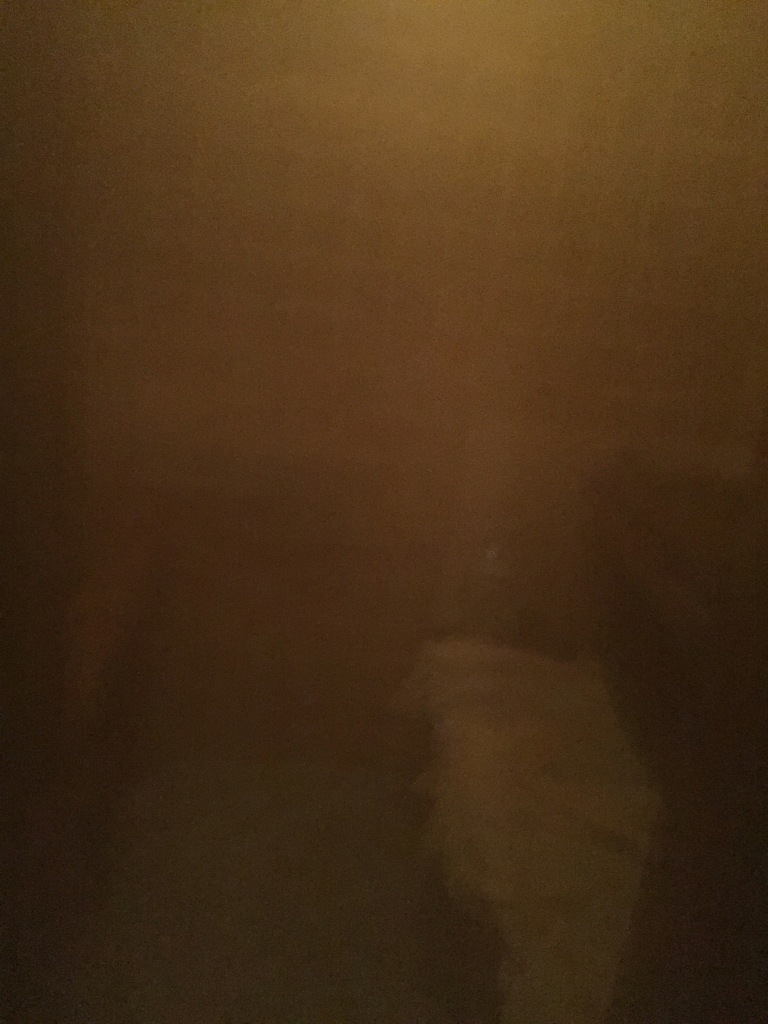 Take a nice breath in filling your lungs. Slowly and in a measured rhythm and feel  your diaphragm descending and your ribcage lifting as the air fills the void of pressure created by these motions. At first these breaths seem unnatural as if you have never breathed like this before. In time these become as natural as the buzz in your mind as the brain responds to the increased amount of oxygen reaching it. Picture a pump that is slowly pumping a fluid out of your body. Each exhalation removing more from the top of your head down to the bottom of your toes. Then if you make it this far your body lifts or is it your spirit with each subsequent exhalation as if a weight has been lifted from your body.

We went on to have a snack at Budgie’s Burrito. We had tacos. They were filled with vegetable goodness as we spoke of metaphoric pokes and admired the cozy space we have found ourselves in. The place has grown from the small vestibule that it once occupied. The downstairs and the extra door were a different business back then. This building as shabby as it may look is at the foot of Kingsway. It’s triangular shape expanding in the gap along the increasing distance from Main.

We strolled along 8th and the signs of change are apparent in the refurbishment of many properties along this route. Condos seemingly hastily thrown up to fill a void all those years ago. Their wooden frames have settled and their guts in the form of plumbing and electrical have long since become outdated. East Van has a character and charm that will hopefully remain in spite of the infiltrating gentrification.

There was more to this post but the words and letters are now lost to error their gripping expression lost like a thought not written down. It should have saved but didn’t. It lead to new thoughts and new words however.