On the last overnight train right now. We are heading to our last destination Beijing. There is a movie playing on a laptop that has many entranced. I pay attention to it here and there. It is a story of a cross dressing singer in a band trying to make it in America. It is a bit of a strange movie but it fits in nicely at this time in this train.

My goals today were hydration, food and writing. The first thing I set off to do was eat. After a night out there are just simple thoughts that pass through the head. Put one foot in front of the other. Stay upright and find a destination like McDonalds to get to. It was the only thing I could think of. Fortunately the restaurant was within a giant food hall filled with four floors of stalls and restaurants. I walked around hoping that something would catch my eye and it did. The meal that I had was delicious and bit by bit I began to feel like myself.

The next place I went to was for coffee. I noticed that there was a Costa coffee place so for a change I decided to go in there. I sat in the patio area being accosted by the shoe shiners. I told them no but they kept coming around time and time again. They really wanted to shine the boots that I had on but I kind of want them to look a bit disheveled besides the shine I got in Istanbul is still holding up.

I walked back to hotel and sat in the park drinking water and juice writing and watching the people passing by. It was nice to sit there instead of sitting in the now crowded lobby of the hotel. I watched this kid get taken down by a girl hard. They were playing some kind of a game where they ripped a sign off their backs. I think he was the last one left or the first one to be picked. It was hard to tell but he wast happy with how he was taken out. I finished my composition and now needed to transfer the pictures. I’ve been using the wifi enabled SD card and it has been working like a charm.

With the blog posted it was time to get some fruit and sit out the last hour before four o’clock. The watermelon was delicious and hydrating and somehow all these little activities lead to the time we had to leave. Throughout the day we had discussions about how everyone has been feeling after last night’s festivities. People’s faces told the story with some suffering more than others. For me the only thing that’s a bit foggy is getting back to the hotel. There were a few shots at the end that I probably should not have done but it was fun.

The train journey this time is a bit different. None of us have a bottom bunk so it has made for some awkward times when passengers that have booked the bottom bunk came onto the train. We were in the middle of watching the movie and the man was not very appreciative of everyone being on his bed. Eventually though with nowhere else to sit we kind of took over. He watched the movie for a while but the visuals of a cross dressing singer prancing around on stage turned him off and he sat at a table a little bit away.

We are also in two different carriages. It might as well be different worlds as the other carriage is much colder. The Danes were having difficulty with the high velocity of air leaving the vent. I came over and gave them a bag to tape over it in order to direct the wind away from them. Soon Harvey went over and helped them with the other vents. The air was blowing hard and I could see how it would be a problem for them.

We got a run down of the next couple of days. We will visit the forbidden city tomorrow and then go to the Kung Fu show. The next day we will have some time to visit different places in the city and finally on the third day we will finish off the tour with a trip to the Great Wall of China. It’s hard to believe that the trip is almost over. We have had a really good time together and we have become as close as people could get over the last couple of weeks. I hope that with this modern way of communicating we continue staying in touch and maybe meeting up at some point in our journey through life.

It’s almost nine o’clock and the lights should go off in about an hour or so. Although I’m tired I know that if I go to sleep now I’ll just end up waking up really early. We are about to stop and I think I’ll go outside for a while to breathe some fresh air. It’s nice to stretch out and get off the train when possible. The stations seem to look the same. The same type of supports for the roof is replicated. I guess these stations were built all at the same time and repeating the same motif unifies the line. This line has been operational for a long time it seems. It links two major centers in China and also two of its biggest cities. 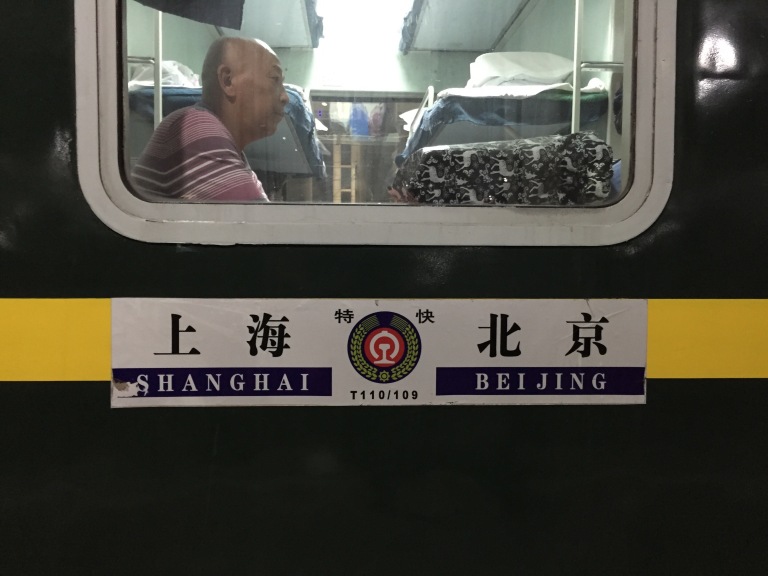 It’s just after nine-thirty and the lights have gone out. I was waiting for this as it would have been hard for me to fall asleep otherwise. There are some of us who enjoy staying up later and then falling asleep. The mood of the train changes as it is blanketed in darkness. There are still people milling about getting things ready. The family traveling in the middle of the train keeps making a racket with the man talking in a loud voice and his wife responding in return. Soon this will end as the kids fall asleep.

I ate all the noodles and have almost finished my grapes. I may leave the rest of them until the morning for a snack. I wonder as I’m sitting here how much of a price difference it is to travel on the fast train to Beijing. That journey takes considerably less time and from the travel we had before it is a lot more comfortable.